TechSmartHow smart tech is changing life
HomeTech NewsHow to get the most out of your GPU subsampling to get...

If we stick to a technical point of view, the experience that a video game offers us is conditioned by two parameters: its quality and the resolution at which we enjoy our games.

If the gpu of our graphics card works to the limit of its possibilities at the resolution that we usually use, we will not have room to use the strategy that we are going to propose in this article. However, this is not the stage that all players find themselves in. Some of them have a graphics card capable of work without too much stress to the native resolution of your monitor, and, therefore, prepared to throw very high rates of images per second.

A user who has, for example, a monitor with a Full HD panel and a GeForce RTX 3070 or Radeon RX 6700 XT graphics card will be able to enjoy a very high frame rate per second at 1080p in a good part of their games. These are the circumstances in which it is worthwhile resort to undersampling they are able to perform most of the relatively modern graphics cards. And, as we will see in this article, its impact on the quality of , a title that clearly benefits from graphic subsampling. In these images we can see that serrated edges are smoother when images are rendered at 2160p and subsequently compressed to 1080p than when rendered directly at 1080p. 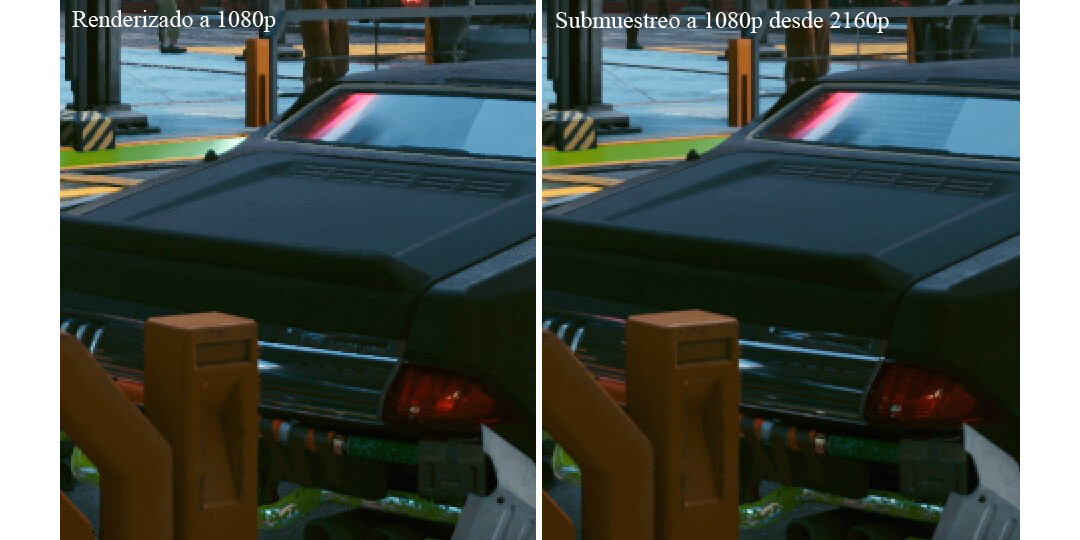 In the following zoomed-in crop of the screenshots above we can clearly see that 2160p rendering combined with post 1080p compression retrieve more detail than direct rendering at this latter resolution. In addition, the sharpness of the images is higher, and, as a bonus, this technique often manages to reduce flicker noticeably (flickering). In this crop of the screenshot we can see that the level of detail of the rear glass of the car is higher when using a PC equipped with an AMD Ryzen 5 5600X processor and an AMD Radeon RX 6900 XT graphics card:

If we have powerful hardware, the best results will be obtained by rendering at 2160p and downsampling at 1440p or 1080p. We can also render at 1440p and downsample at 1080p. And even if we have an exceptionally powerful PC, we can consider rendering to a resolution greater than 2160p and subsample to this last definition. We have tested it, so that in the following table we have collected the frame rates per second that we have obtained in ‘Doom Eternal’ when using a Radeon RX 6900 XT and an Intel Core i9-10900K processor:

Finally, in the third table we have collected the rates of images per second that we have obtained in ‘Wolfenstein: Youngblood’ using exactly the same hardware from the table above:

Two more notes before concluding. Technologies can be combined with subsampling in which we have just investigated with the purpose of perceptibly increasing the rate of images per second that our graphics card delivers to us.

Nor should we overlook that subsampling increases the consumption of our graphics card due to the greater effort it must make to face rendering at a higher resolution. The Radeon RX 6900 XT that we have used in our tests uses around 60% of its resources when rendering at 1080p, but this figure increases up to 100% when doing it at 2160p and downsample to 1080p. In these circumstances the consumption of the PC increases by approximately 50 watts.