YouTube tests Clips, cropped videos that mimic those of Twitch

youtube wants to face the stiff competition represented by twitch, the shared video streaming platform that is well received by young audiences, specifically among the sector most fond of video games.

Clips allows you to trim and share small video clips

YouTube already has YouTube Gaming, but one of the most popular categories on Twitch is Clips, which allows you to trim and share small pieces of video. YouTube is already developing its own version, currently in the testing phase, after receiving numerous requests to include the function on its platform. Now, the company offers the possibility of participating in the testing of this novelty to a small group of content creators. 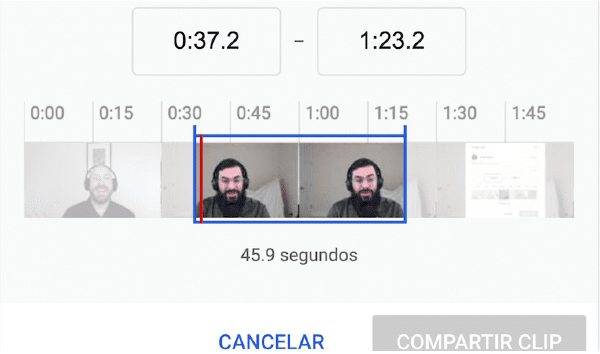 The YouTube Clips feature also allows capture small fragments of a video, that can be shared later on other platforms. YouTube hasn’t strayed too far from the settings it mimics, especially in terms of the length of clips, which is the same as on Twitch, so Clips only allows you to trim 5 to 60 second clips from a video.

When this feature is available, a scissors icon will appear at the bottom of the YouTube video. From there we can select the desired fragment and cut it within the indicated duration range.

The resulting video will be displayed as a loop. YouTube has published this test video so that all interested can check how Clips works:

As can be seen, selecting the scissors icon opens a new menu on the right side where you can edit the video by selecting the start and end point as well as the duration of the resulting fragment.

In the event that the source of these is a video that is being broadcast in streaming, the selected fragment will not be available until the broadcast is finished. Initially, when it is officially launched, the feature will be available on the desktop and Android versions of YouTube, with the iOS version remaining for later.

Editing tweets: Twitter starts tests with the most awaited function by users

Twitter announced that it was working on a button to edit posts in April...
Microsoft

Xbox Division Chief Phil Spencer said his team is looking into a way for...