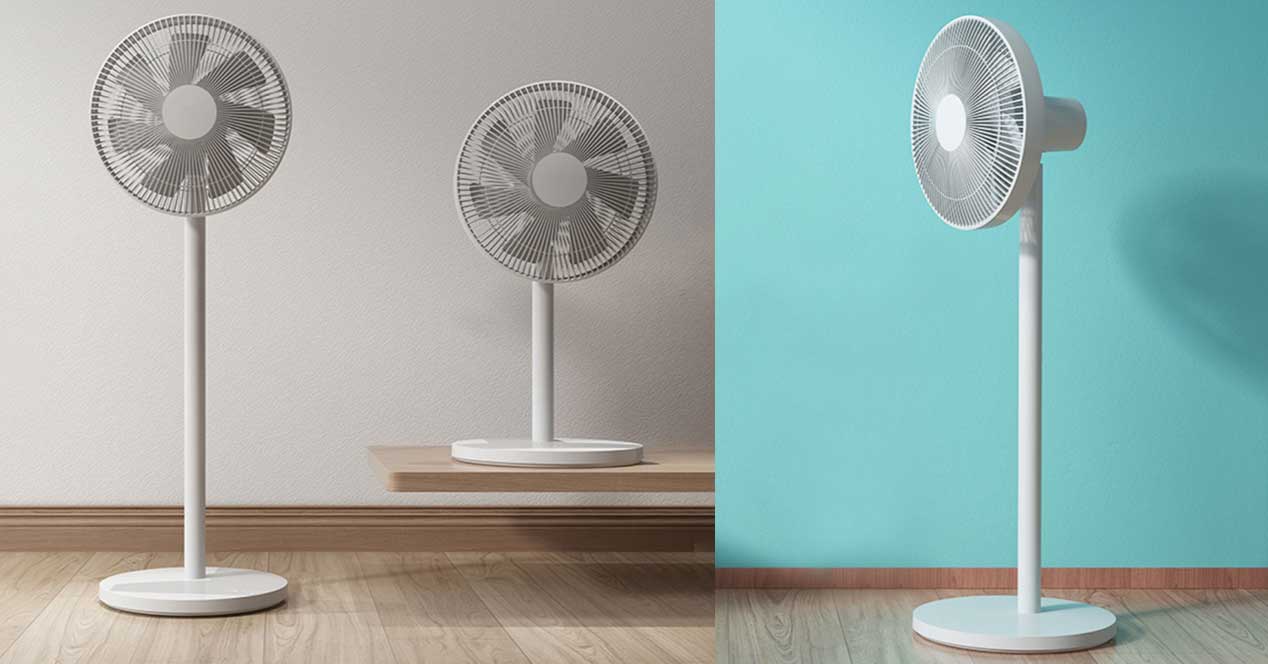 Xiaomi surprised a few days ago announcing the Xiaomi Mi Smart Standing Fan 1C, a new fan that they announced for the international market, including countries like Spain. The price of this fan put that it started from 39.99 euros, which is an excellent price for a device with intelligent functions. However, Xiaomi has launched in China two similar fans and with a much lower price.

Xiaomi has launched two new models in China: the Mijia Floor Fan and the Mijia DC Frequency Conversion Floor Fan 2. The price of this second model is almost double for the type of engine it uses, as we will see now.

The Mijia Floor Fan is a simple standing fan with 7 blades and capable of generating an air flow of between 9 and 27 m3/ min, and with a minimum loudness of 38 dB (A) and a maximum of 63 dB (A). The fan power is 32 W, and the cable is 1.6 meters. The weight is 3.4 kg, being light enough to be able to move it with one hand to where it suits us best. We can adjust 36º of vertical inclination, and the fan oscillates 90º horizontally. Its maximum height is 1 meter.

At the top we find several buttons to turn it on, control the oscillation, change the intensity mode, or configure the timer. On an intelligent level, we can use it with the Xiaomi application to avoid having to press a physical button, and we can link it with the thermometer so that it turns on automatically.

This fan model is very similar to the previous one, but uses a DC motor instead of one AC. This engine provides many advantages, among which we include a lower noise of 31.6 db (A) as a minimum and 55.8 dB (A) as a maximum, a lower energy consumption, and a greater durability. In addition, by being able to modulate the frequency with greater precision, it allows a gradual adjustment of the speed to leave it at the point we want. The maximum height is also 1 meter.

Like the cheap model, it is also compatible with the mobile app and voice control, with a nominal power of 15 W, so it will consume half the cheap model. Using it 4 hours a day for 4 months, we have an energy consumption of around 1 euro, compared to 2 euros that the cheap model would consume in that period. Although savings will not be a determining factor, the rest of the advantages make it a better purchase option.

The Xiaomi Mi Smart Standing Fan 1C, despite being announced at a price that started from 39.90 euros, on Amazon is in pre-sale for 79.34 euros, sold by Amazon, going on sale on June 30. It has two modes (sleep and standard) and three speed settings for air flow, with a noise of 37.2 dB (Ay). In addition, it can be controlled by mobile and by voice with Alexa and Google Assistant.

We still do not know how many models Xiaomi will put on sale in Spain, but it is expected that they will also launch two for the “from” that they showed in the price of the ad. The currently confirmed model will be the one with an AC motor, both for price (39.90 euros) and for being able to choose only 3 modes of ventilation intensity.

VLC lets you bookmark your podcasts and audiobooks on Android

VLC lets you bookmark your podcasts and audiobooks on Android

Do you want to customize Telegram animated backgrounds? Here we show you how...

WhatsApp: what was the reason for creating only Saturn and not all planets