After winning a series of renderings and also passing certifications, the Xiaomi 13 family is apparently ready to hit the market. According to information leaked this weekend, everything indicates that the line devices should be announced on December 1st🇧🇷

The sources responsible for sharing the rumor also report that Xiaomi may release a teaser this Monday (28) confirming the time of the event. Thus, the idea is to mobilize the public at the last minute so that the Chinese is the first to use the new Snapdragon 8 Gen 2 processor.

As usual, the Xiaomi 13 line should be announced first in China, but due to the recent Covid-19 outbreak in the country, the event will be online only.

So far, Xiaomi has not yet issued an official note about the new leak. In any case, it must be remembered that the Xiaomi 13 line is really ready to hit the market.

This year’s devices should have the latest Qualcomm processor, options with up to 12 GB of RAM, Leica-certified 50 MP main camera, 5,000 mAh battery and native Android 13.

Xiaomi 13 may be launched with ceramic rear design

The Xiaomi 13 is getting closer to being released. But while this still does not happen, new information about the cell phone continues to emerge. This time, rumors point to several color options, including some with a ceramic back.

Depending on the shade chosen, the smartphone could vary in material. That is, some will bring ceramic as a finish on the lid, while others would come with the more traditional glass. 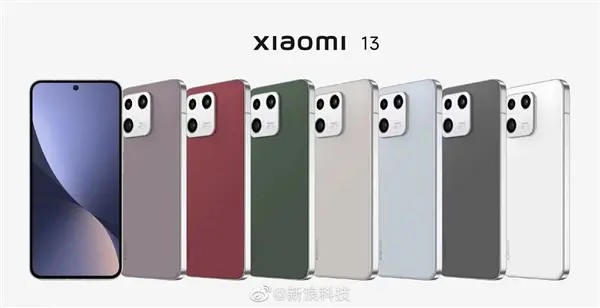 The Xiaomi 13 family should have several color options, with variation in the back material | Image: Reproduction

Details on color options have not been released at this time. However, there is other information about the technical specifications that will probably be present in the future family of tops of the Chinese brand.

Among them is the presence of UFS 4.0 storage. Furthermore, the Snapdragon 8 Gen 2 mobile platform is expected to power the Xiaomi 13 family models in order to bring top-of-the-line performance to them. Recent Geekbench leaks also report the presence of 12 GB of RAM.

The most basic version of the series should have a flat screen. The future Xiaomi 13 Pro – a more sophisticated variant – tends to have a curved panel – not to mention a new camera module expected in it. Similar to what Samsung does in its Galaxy S line.

So, what are your expectations for the Chinese manufacturer’s next flagship devices? Tell us in the space provided for comments.