TechSmartAerezona Developers
HomeMobileAndroidWe tested the first beta of Android 12L on a mobile: this...

We tested the first beta of Android 12L on a mobile: this is the new Android for foldables and large diagonal screens

The new version of Android, Android 12, has been official for weeks, it was released for the Google Pixel and the manufacturers are already finalizing their respective updates adapted to their proprietary layers. But that hasn’t stopped Google’s system from continuing to evolve and set its sights on tablets and flip-screen devices. This is how Android 12L was born, for ‘Large’ or ‘Grande’, and the first beta is already among us.

After its announcement, it only remained for the system to be released so that we could start testing it first-hand, and Google has already done so officially. The first beta of Android 12L is now available for Pixel phones and we have downloaded and tested it on a Google Pixel 5. For some reason that we do not know, the Pixel 6 will have to wait a little longer. Well, let’s tell you how it went with her.

The day dawns with a message that drives us technology lovers crazy: “you have a system update available”. So said and done, we put our Pixel 5 to download the 240 meg update and after a few minutes, and its corresponding reboot and system configuration, we already have Android 12L Beta running through the veins of our mobile phone. So it’s time to talk about your news.

Let’s start with the new animations, since Android 12L polishes some aspects that were already present and that now stand out more than before. For example, opening and closing apps is much smoother, and animations are slowed down to make them more enjoyable. When we go from an open app to the desktop we can see in more detail how the window shrinks until it disappears over the icon, and how the icon receives the window with a small bounce effect. A striking effect on small screens and that surely makes much more sense on larger screens.

Another graphical effect that changes is that fades to (and from) black are now slower and smoother. Android already showed this effect when turning the screen off and on, but when the animation slows down everything is more attractive. Now we can clearly see how the desktop dims to black when we turn off the screen, and the effect is really friendly and more attractive. On power up the same thing happens, and the screen turns on more slowly to let us see how the desktop (or the app that we have open) appears from the shadows. And we are also on an OLED screen, so switching on is even more natural.

There are several improvements that we have not been able to test due to the fact of being in a Pixel 5, such as those that depend on screens of more than 600 points of an inch and those that are integrated into large screens. So we haven’t been able to see how the new two-column taskbar works, nor the new multitasking options. Those options are for now outside the functions for mobile phones, at least in the one we have tested and for the first beta of the system. We know that they are functions present in the emulator when we activate the option to test on tablets, by the way.

Another option that at the moment appears deactivated (Android 12L Beta on a Pixel 5) is the possibility to decide how long we have to press the Home button for the Google assistant to launch. In the emulator we have up to five intermediate steps available, from ‘Short’ to ‘Long’, for us to decide how long it is necessary to press to talk to Assistant, but this option, present in the settings for System gestures, is not yet available on phones Pixel. 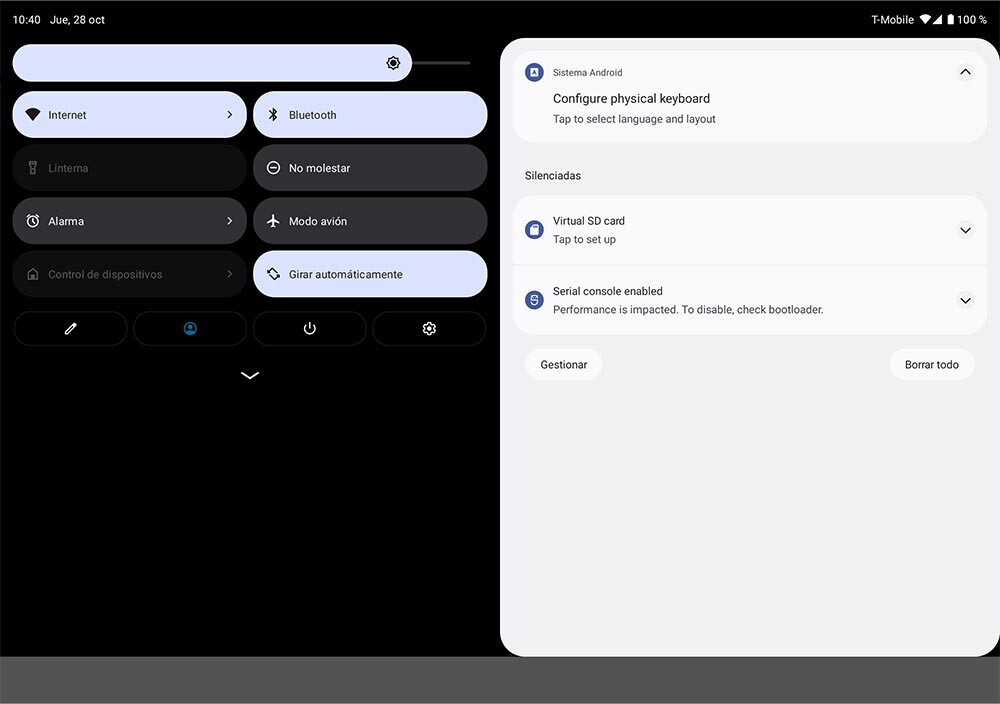 The 2-column options do not appear in the Android 12L mobile beta, neither on the normal screen nor on the taskbar.

Since we are on a mobile phone, the keyboard to enter the PIN (if we do not opt ​​for the fingerprint or it fails) keeps showing up in the center of the screen, without changes, as it is another exclusive option for tablets. Of course, we don’t have the new dock available either, which we can test when we’re emulating a tablet. Another function for large diagonal screens that does not reach mobile phones.

Note: We have simulated a pixel density sufficient to enable tablet modes from the system developer options (600dpi or higher), and the beta has not enabled any such special features. So, either they are deactivated in this first beta or the beta knows that we are on a mobile and does not have them installed.

So, we come across a first beta of Android 12L for mobile somewhat decaffeinated, with several graphic changes in system animations but without additions in terms of practical features for day to day. It was suspected that Android 12L would be more of an adaptation of Android 12 for screens without renowned additions and the first beta, at least the first for mobile, seems to confirm it in a certain way. We will see what we find in future betas, as Google usually hides surprises in subsequent releases of system versions. We will remain vigilant.