Home Mobile Android We have tested ColorOS 12 beta: this is the new OPPO layer...

With the growth of OPPO quarter after quarter, its layer has become popular, ColorOS 12, which is now also used by OnePlus in China, its native country. Like the rest of the layers on the market, ColorOS links its evolution to the steps forward that the operating system takes the one you saw, and with the arrival of Android 12, the eastern firm is already finalizing the details for the final launch of ColorOS 12.

The layer is currently in its beta phase, with a definitive release that we will probably see arriving this November, and we have had access to it. We have been able to test ColorOS 12 beta first hand and we tell you our experience. Although if you want a small spoilersColorOS 12 has turned out to be a very successful step in the evolution of a layer that becomes more solid, coherent and lighter than in previous versions.

ANDROID 12 IS HERE: NEWS AND FEATURES

The design in ColorOS 12 beta evolves but does not revolutionize 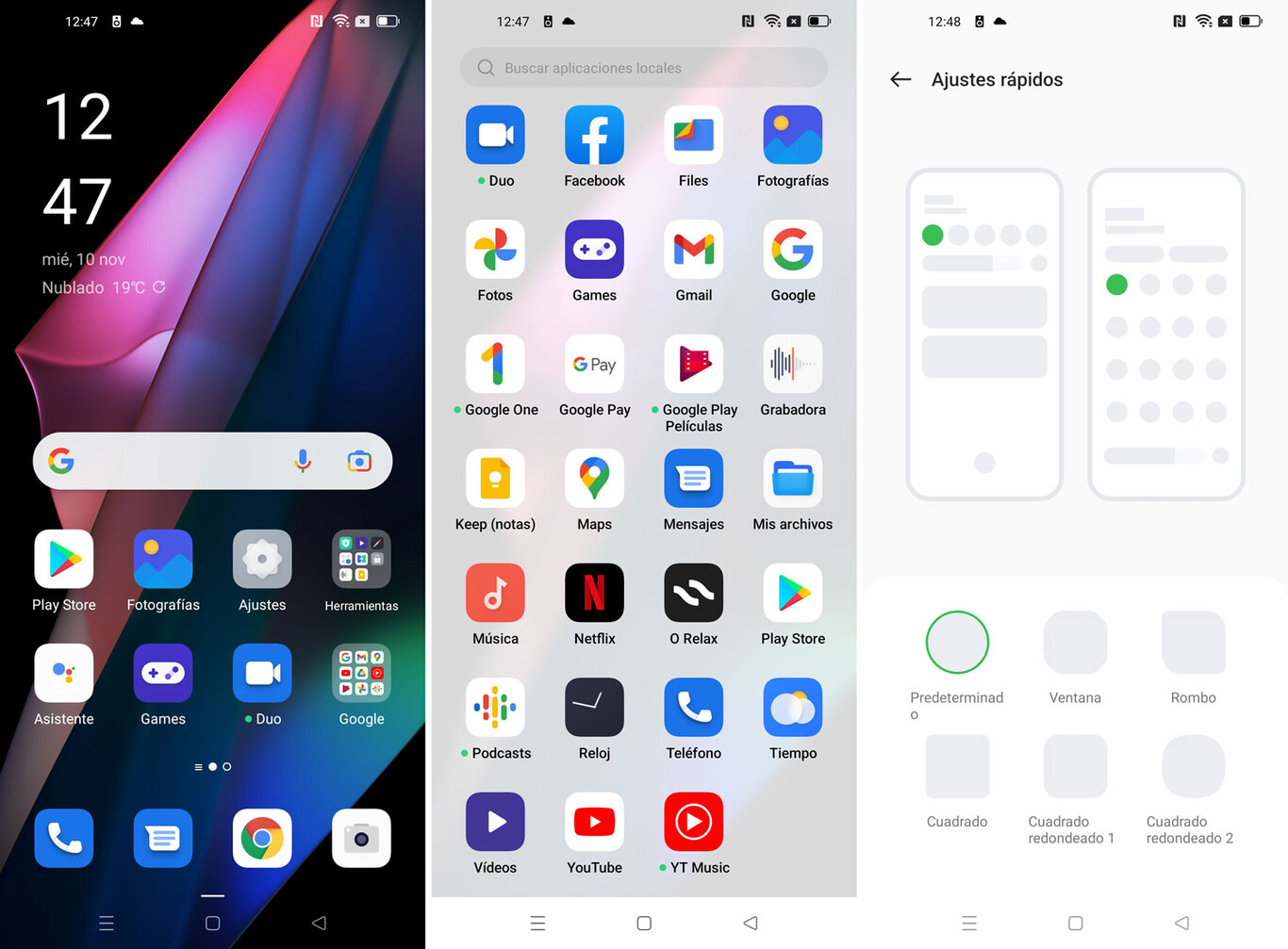 Although subtle, the change in ColorOS 12 beta veers towards more cleanliness and a better system display

We can start the analysis of the new layer by talking about what really attracts the most attention, and that is the design of the new layer. Although with ColorOS 12 we do not have a revolution as such in the graphic section, they are appreciated subtle changes that clean up the appearance of the layer and that they follow to a certain extent what OPPO already commented on in its presentation. The brand indicated that it wanted to make soft changes so as not to overly upset its user base, and ColorOS 12 shows this quite well.

ColorOS 12 gets rid of certain aspects of its previous versions that made everything more dense. The information on the screen is reduced, the texts are shortened at the same time that the sources grow and everything is tinged with a greater order. The feeling of cleanliness is evident and this increase in readability is combined with the arrival of more striking and defined icons. Old customs are respected, however, such as rounded icons everywhere, but in general we get larger elements on the screen, which makes it easier to locate and use.

In the interface we find high-contrast colors in practically every corner, and we have functions such as “Colour Vision Enhancement”, an option within the screen settings. The function still appears even in English as “Color vision enhancement” when we access it and when activated we have several color profiles such as gray scale or color filters, and even an option to customize it that does a “Color vision test” to adapt the screen to the profile that best suits us. 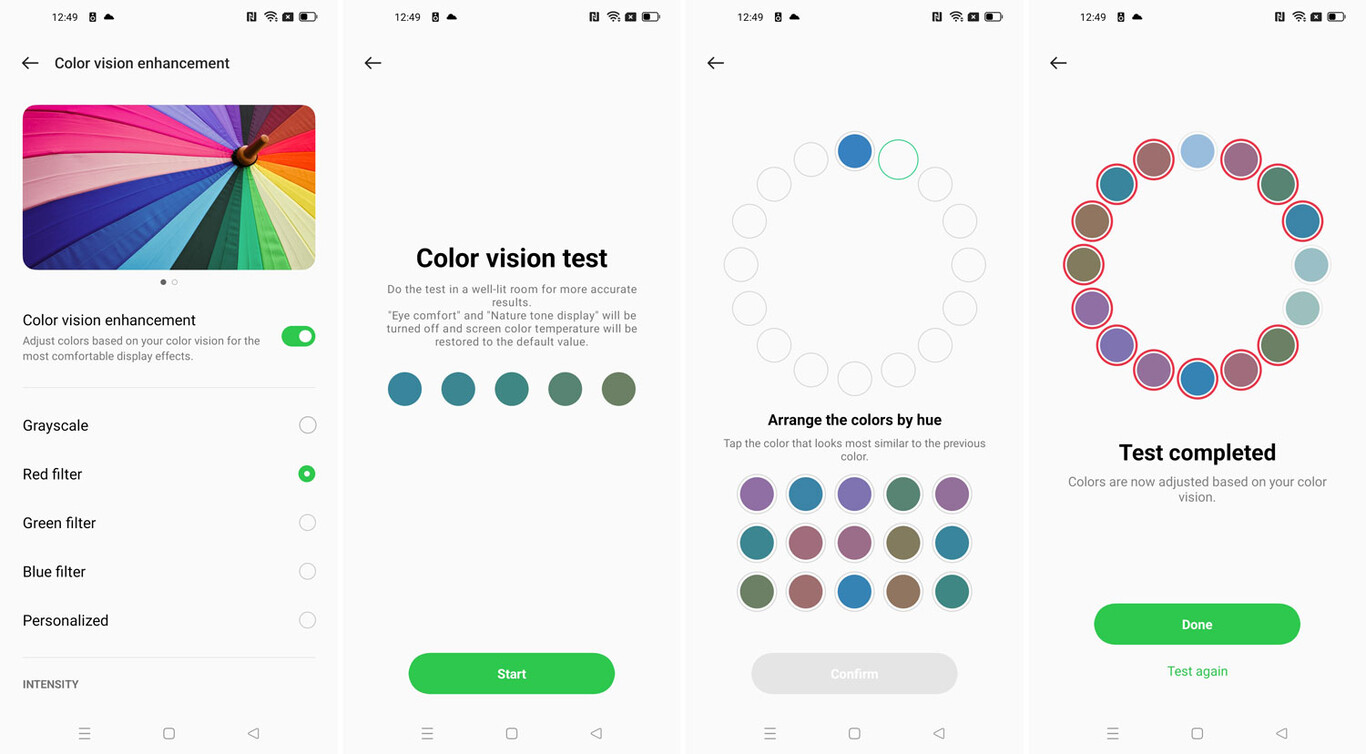 With the color enhancement, which we define through the configuration, the system adapts to our vision

As far as customization possibilities are concerned, ColorOS 12 drinks deeply from Android 12, which it hides behind the curtains. We have the possibility of changing the colors of the interface depending on the desktop background, for example, although the layer does not use ‘Material You’ as such, but rather takes everything to its own terrain. Selecting a new desktop wallpaper implies that ColorOS 12 will take the dominant color of it to take it to each corner of the layeralthough this function works only with wallpapers static and not with the animated ones.

Another new option lands directly from OxygenOS 11, known there as ‘Canvas AOD’, and that is that ColorOS 12 now allows us draw freehand and display such drawings on the screen Always on of the system. We can also use text and images, and we also have the possibility to take a photograph from our archive (already captured, we don’t have access to the camera from here) and have the system draw the silhouette. This function uses machine learning and allows us to take lock screen customization to another level. 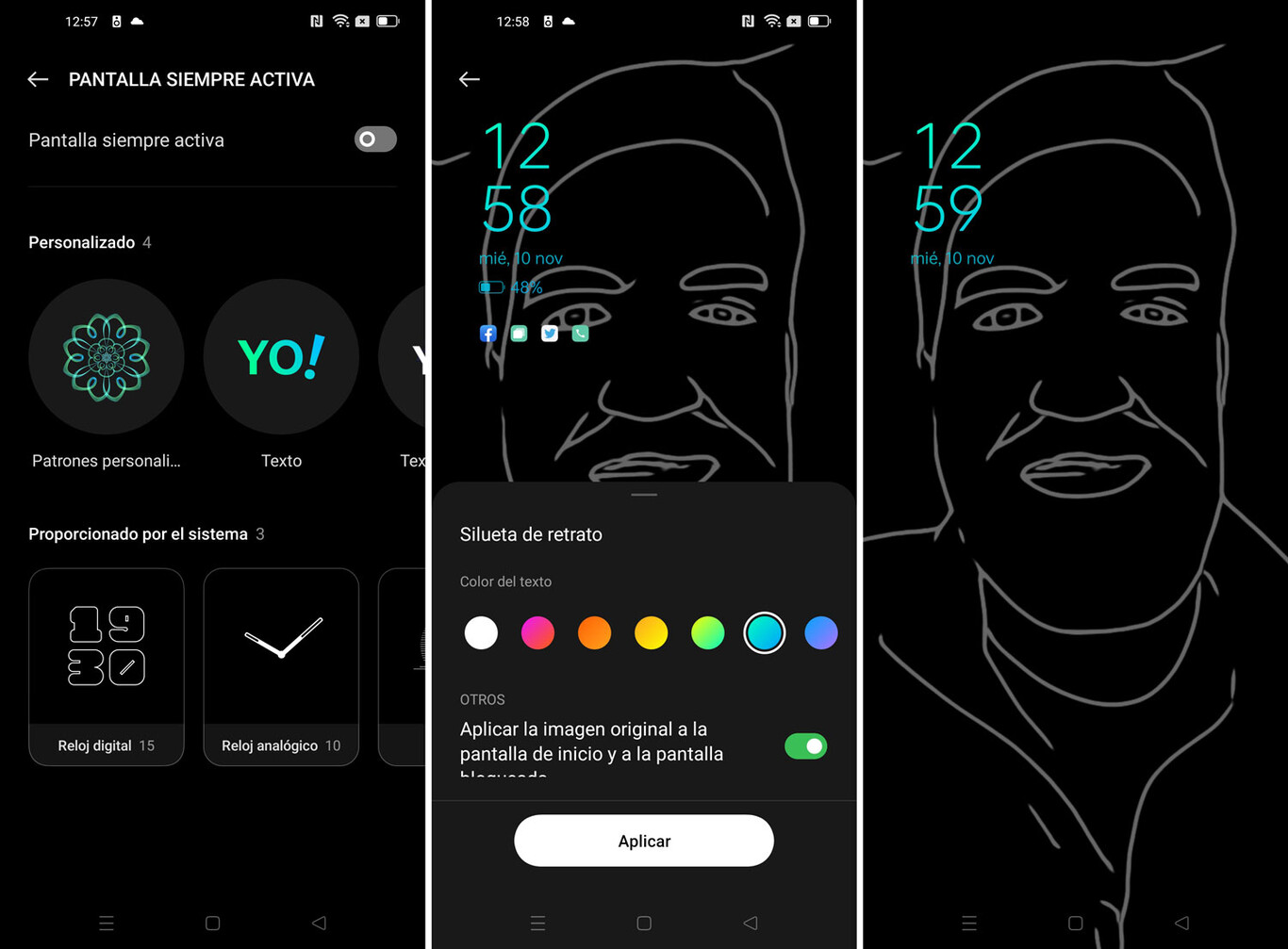 Apart from this, ColorOS 12 allows us configure the size of practically everything we have in the interface, also including the text boxes. As we said in the design section, ColorOS 12 does not represent a revolution with respect to the previous layers of the brand, nor in the customization section, but it does represent a step forward towards obtaining a more cohesive layer, more consistent with each other. But above all, cleaner. And now, let’s talk about the new additions in terms of features.

OPPO has already detailed several of the new additions to ColorOS 12 that was then entering the beta phase that we have now tested, and one of them is the arrival of the Omoji, although we have not been able to take a look at them because they are not yet present in this beta phase . Apparently, OPPO will release them later as part of a ColorOS 12.1 that still does not have a confirmed date but that, being at the height of the year we are in, already points to 2022 except for last minute surprises. 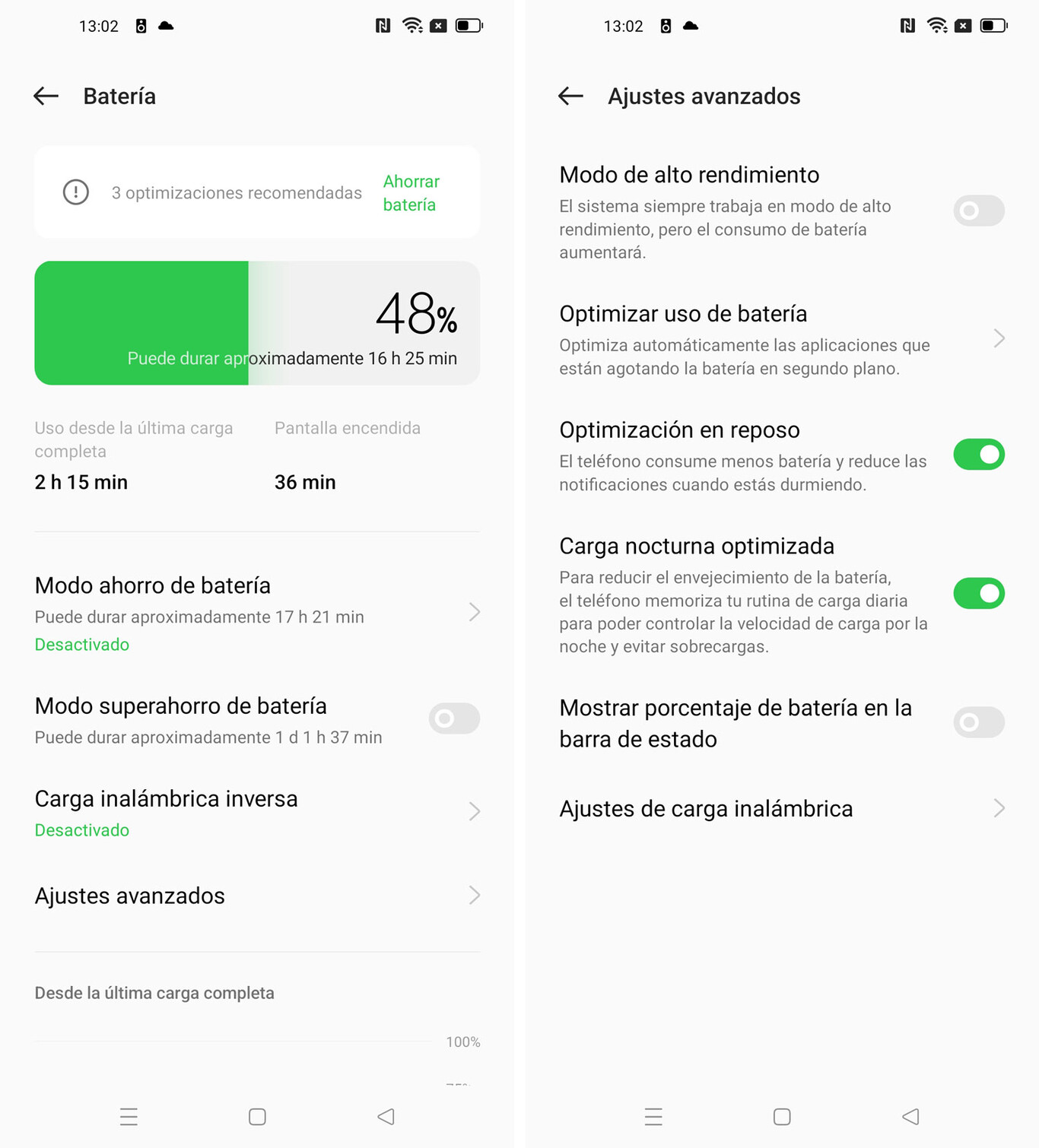 We are left wanting to see some features promised for ColorOS 12 and that it seems that they will arrive with version 12.1

Another function that is deactivated for now (and that also points to 12.1 although we will see later) is that of the connection with computers, the famous PC Connect. OPPO promised a feature designed from scratch already with ColorOS 11 but a version was delayed and we will see it coming soon. OPPO phones will have a much more direct interaction with their owners’ personal computers, a mode very similar to Apple’s ‘Continuity’ with iPhone and Mac, or the native Samsung Galaxy system for Windows, which will even allow us to drag things directly from PC to phone and so on.

What we do get in this ColorOS 12 beta is the new energy control panel. Now the information about the consumption of the phone is more detailed, the layer provides new configurable saving modes and in the advanced settings we get optimizers to maximize battery life. And of course, we have a high performance mode to minimize these “cuts”, at the cost of obtaining fewer hours of use. 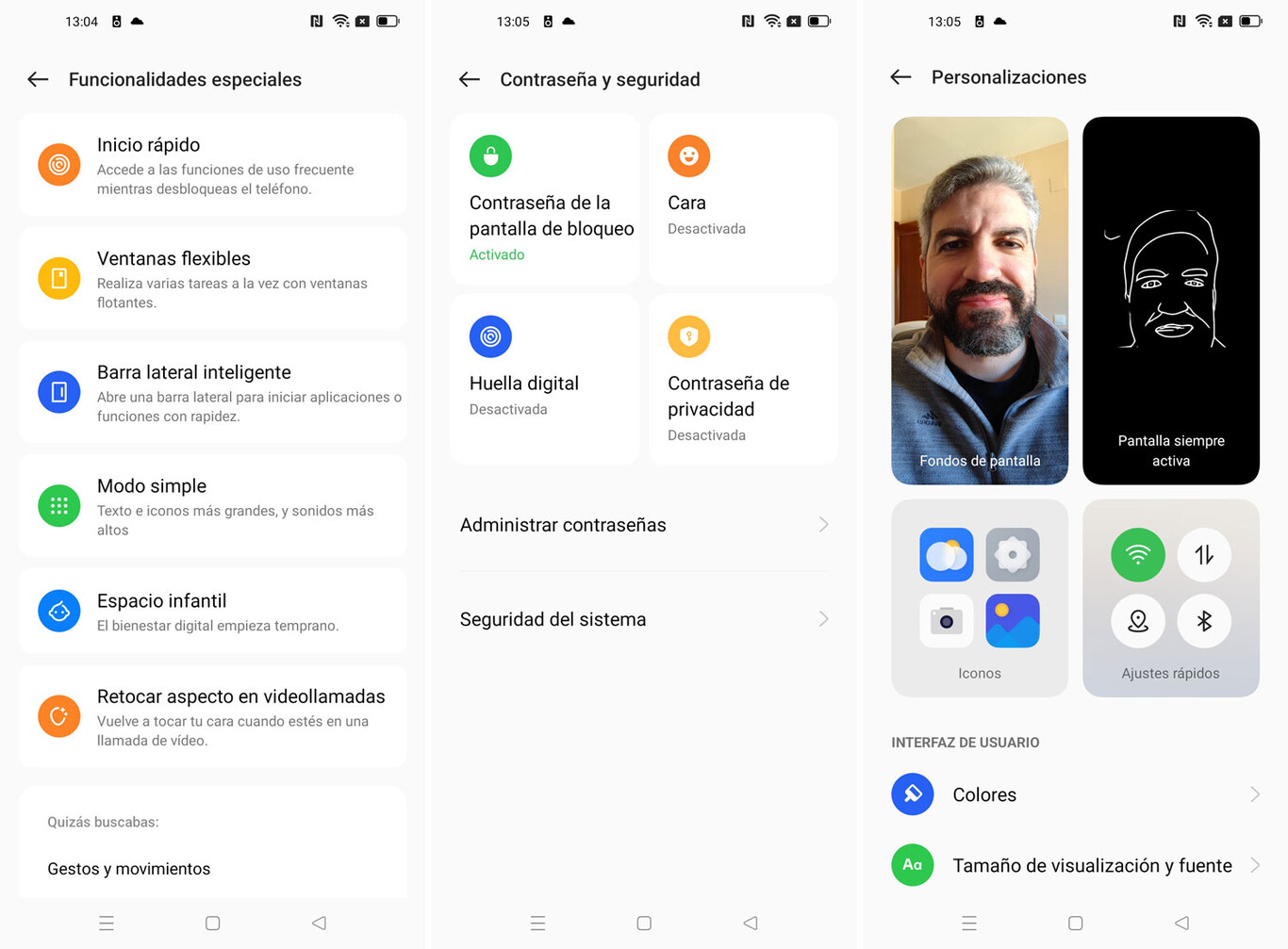 As we have already mentioned before, ColorOS 12 gives the feeling of being a more mature layer than its predecessors in different sections, and not all of them are due to Android 12 as several parts of the system (such as customization or the security section) are not yet available to manufacturers. In fact, the adaptation of the style of the system to the desktop background is an OPPO development that resembles that of the ‘Material You’ but only in concept.

ColorOS 12 is a more mature layer and it is appreciated

OPPO has created a ColorOS 12 that works more smoothly, that incorporates interesting options both new and refined over the years and that is more usable. The graphic section, already mentioned, is cleaner and more pleasant, the system allows us to do more things and, in general, everything is lighter. And except because ColorOS 12 continues to invite us in its configuration to install something bloatware (like Aliexpress, for example), the truth is that it is a fairly clean layer of unnecessary or unrequested apps.

In a way, We can say that ColorOS 12 does not revolutionize but it does polish the ColorOS 11 that we already knew, at least in this beta phase in which we do not have all the announced news available. When ColorOS 12.1 lands and we can really see all the developments, then maybe we can talk about a more remarkable step forward. In general, good work by OPPO with a layer that has gradually become one of the most solid in the Android world with the permission of other more veteran and widespread ones.

One UI 5.1 should be released in February with the arrival...

RealityScanCreate 3D models on iPhone and iPad with this Epic Games...