US information warfare on social media, uncovered in August, is now set to be scrutinized.

The US Department of Defense has ordered a comprehensive review of US information warfare via social media. This emerges from a report by the Washington Post on Monday. Fake accounts on Facebook, Instagram and Twitter were exposed in August. Graphika and the Stanford Internet Observatory revealed at the end of August that the accounts were linked to the US military. Covert influencing campaigns were carried out.

Colin Kahl, Secretary of State for Policy at the Department of Defense pentagon-psychological-operations-facebook-twitter/" target="_blank" rel="external noopener">according to the Washington Post instructed the US military to provide comprehensive reports by October on what influencer campaigns are being conducted online and for what purpose. 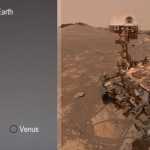 Earth and Venus meet in this magnificent photo taken from Mars

In July and August, Meta and Twitter identified and removed a number of accounts running coordinated influencer campaigns. According to the Washington Post, the reasons for the removal of the accounts were the platforms’ respective guidelines on platform manipulation and spam. The data was provided to Graphika and the Stanford Internet Observatory for research, which then examined it.

Both found out together that the accounts formed a coherent network across platforms. This information network was then used to disseminate content aimed at promoting narratives in the interests of the United States and its allies. According to the Stanford Internet Observatory, the campaigns were directed against Russia, China and Iran. The focus was on the war in Ukraine and anti-extremism.

The research institutions conclude in their summary report that it is “the largest case of pro-Western influence on social media that has been investigated and analyzed by open-source researchers to date.” So far, it has been assumed that such influencing campaigns are primarily carried out by authoritarian regimes. However, the report shows the “much broader spectrum of actors”.

However, the fake accounts of people and independent media were not particularly effective. The posts and tweets they distributed received few likes and retweets. Only 19 percent of the accounts had more than 1000 followers.

The Washington Post writes that the US government and several federal agencies have expressed concern about the use of such interference, which is said to have triggered the review.

Apps will soon be able to overlay things on iPhone lock screens and the...
Tech News

The Ryzen embedded CPUs get a big upgrade with the V3000 series. However, it...