Twitter 2.0: Elon Musk reveals the main features of the “new generation” of the social network

Recently acquired by Elon Musk, Twitter is undergoing a major restructuring that will be noticed by users in the form of new features. Last Sunday (27), the billionaire revealed infographics that highlight the news that will come to the social network in its new generation, dubbed “Twitter 2.0”.

One of the main additions to the platform will be advertisements as a form of entertainment. There are no details on how this novelty would work on the social network, but the executive’s publication suggests that there will be more interaction – possibly robotized – between users and companies, streaming platforms and other official profiles. 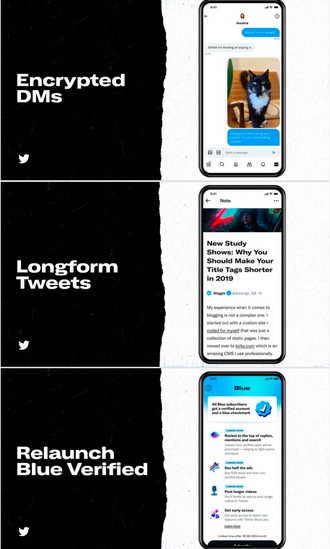 The “everything app”, as the new version of Twitter is called by the CEO, will give content creators the ability to monetize your videos by requesting payment of a certain amount in order to be assisted. The media claims that this feature should be known as “Paywalled Video” (“paid access video”, in free translation).

A long-awaited feature is encryption in Twitter direct messages — the popular “DMs”. The purpose of this tool is to reduce the risk of leaks and reinforce users’ privacy.

Twitter should also start offering the possibility of creating longer tweets, such that they should adopt an informative text format – with title and multimedia content –, according to Elon Musk’s newsletter.

Finally, “Twitter Blue” subscribers will once again receive their verified badges and will have new exclusives, such as more visibility of publications with automatic boosting on the platform, a reduction in the number of ads displayed and the possibility of publishing longer videos than users with accounts free.

Graphs inserted into the slide by the CEO of Twitter, SpaceX and Tesla indicate that there was a large increase in the amount of monetizable active users of the social network since July. Currently, more than 250 million profiles from around the world can have ads inserted in their content, which could be a new business area for the platform.

The greater possibility of monetization with ads, combined with the increase in the number of new users and time spent by people in the application, form an environment much more conducive to generating revenue with Twitter. 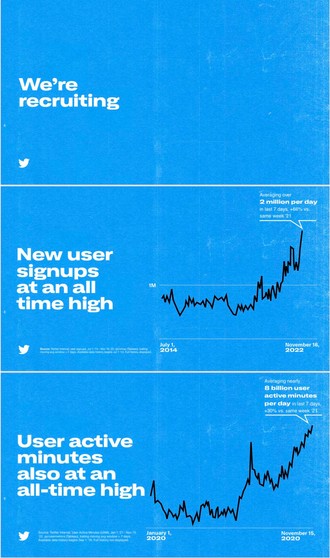 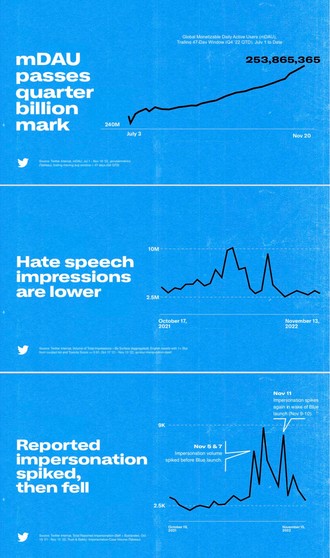 Musk took the opportunity to point out that impressions of publications with hate speech have reduced in recent months after peaks in 2021 and 2022. In addition, the number of fake accounts peaked with the relaunch of the “Blue” signature, which grants verified badges to profiles unofficial — which caused confusion among users.