TechSmartAerezona Developers
HomeTech NewsArtificial IntelligenceThis website helps you know if your photos have been used to...

This website helps you know if your photos have been used to train DALL-E (because yes, it is already necessary)

Artificial intelligence (AI) models used in imaging programs such as DALL-E, Midjourney, and Stable Diffusion have been trained on datasets containing millions of images collected from the web and that include the work of designers, photographers, artists, among others.

This mechanism, which allows the creation of artistic works based on previous art together with the user’s indications, is giving rise to a new discussion: should the consent of the original authors be requested for their images to be used in these programs? Given this scenario, “Have I Been Trained?” was born.

Have I Been Trained? It is a tool that allows anyone know if your images have been included in one of the most used data sets by imaging programs. This is LAION-5B, which claims to have more than 5,000 million filtered image-text pairs.

We should not confuse Have I Been Trained? with Lexicon. The latter is a search engine that returns results with images already generated by AI. The one we mention in this article, on the other hand, is located several steps before, that is, in the images that feed these programs.

Use Have I Been Trained? It is very simple. We have the possibility to search for images by text and by reverse search (as Google also offers in its search engine). The one that interests us in this case is the reverse lookup. Just click on the camera iconload the image of interest and wait. 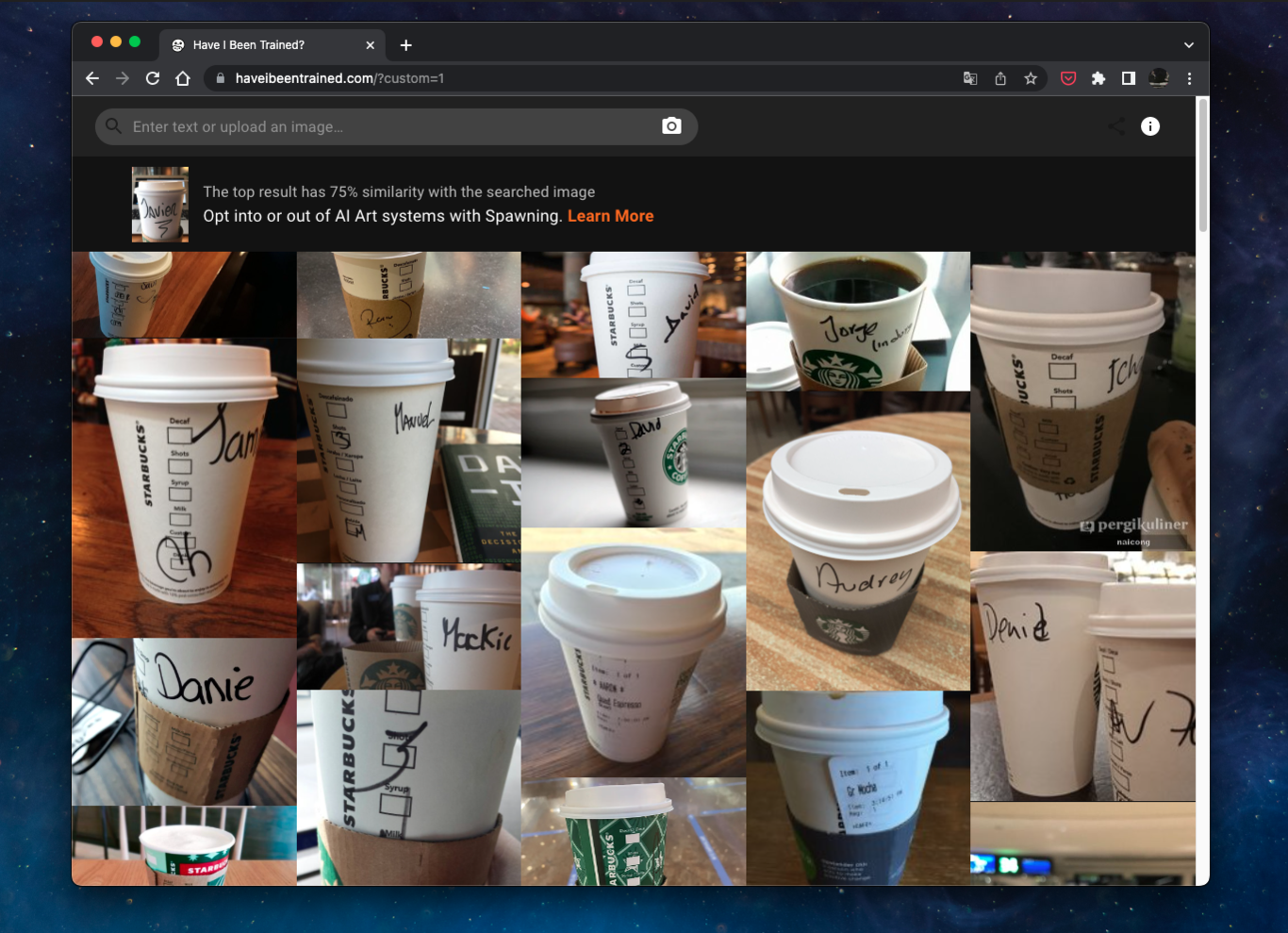 After the search is complete, the page will display a tile with the closest matches and a similarity percentage. In our case we have loaded an image of a glass of coffee and Have I Been Trained? He told us that this one has a 75% similarity with those found in the database.

In case of finding a match of the We would 100% verify that our image has been included in LAION-5B and, consequently, that it could be used by some of the current image generators or even some of those that may arrive in the future for users to create new images.

Have I Been Trained? It has been created by a group of artists who, they explain, seek to help their peers to opt for their work to be used by these AI programs or, on the contrary, reject this idea. For the latter, they are taking the first steps with an image acceptance or exclusion tool.

Will artificial intelligence generators have a disruptive effect on art? What about copyright? These are some of the questions that are beginning to be heard. The truth is that it is still early to answer them. The World Intellectual Property Organization (WIPO) states that only people can be authors of creative works.

In this sense, the work carried out with AI programs would not be in breach. However, both WIPO and other organizations are considering adapting their standards to these times when artificial intelligence is on the rise and the voice of creators is beginning to be heard. Only with time will we know how all this evolves.

In Xataka | Some are combining Stable Diffusion AI with Photoshop. the result is great

After announcing the arrival of Wazer for Android Automotive, Google is making changes to...
Apple

Apple xrOS and realityOS: AR and VR systems must be based on iOS and macOS

Several reports indicate that Apple may launch its own VR headset with a content...