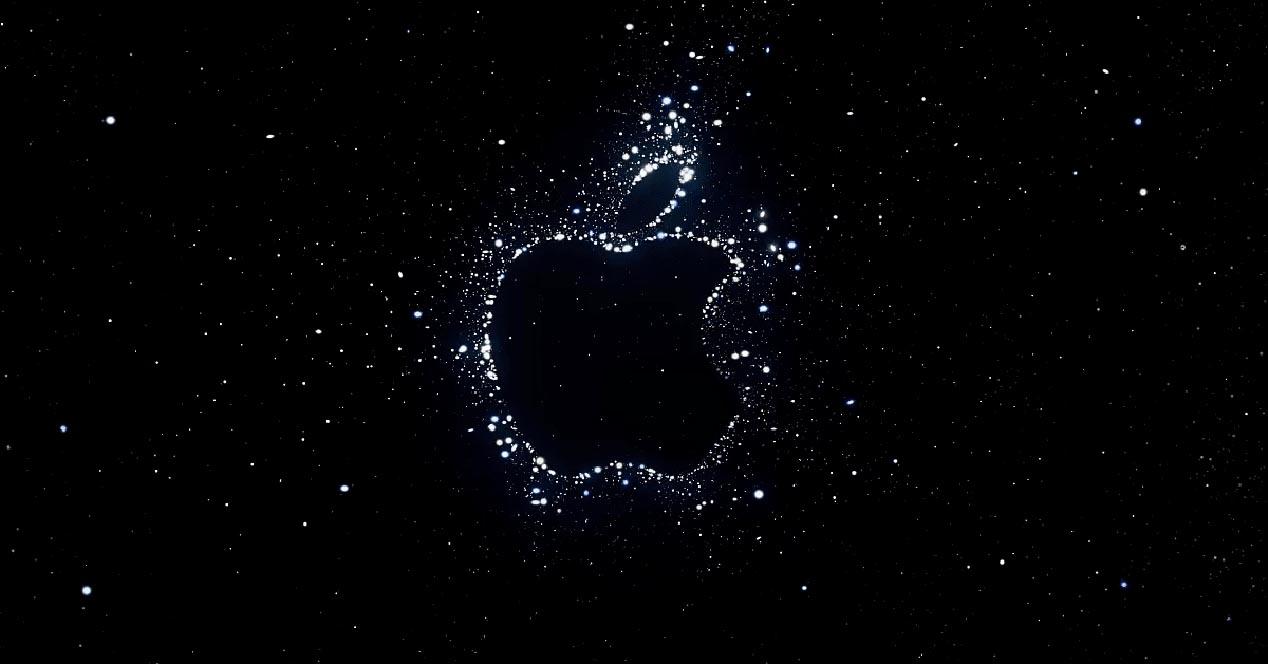 Apple has had the pleasure of presenting its new products today through a new event. In this, the main protagonist has once again been the new iPhone 14, but of course we have been able to attend the presentation of more products from the Cupertino company.

This new event, called on this occasion «far-out«, has served as the ideal setting for the presentation of the new range of iPhone, as well as the new Apple Watch (including the new Apple Watch Ultra) and the new Apple AirPods. Below you will have a summary of the most interesting news that this event has left.

The first Apple product to jump onto the scene was its new “batch” of Apple Watch. The new Apple Watch 8 is designed with a screen that goes all the way to the edge, and is waterproof, dustproof and shatterproof. In addition, it also has a fall detector that will detect us if we suffer one of these at any time. One of the novelties of this series 8 is a sensor that will be able to measure body temperaturea novelty when it comes to smart watches.

With the arrival of this new temperature sensor, the Apple Watch 8 will also be able to measure when a woman is close to ovulating. CycleTracking, which is what the new function to track women’s periods is called, will be encrypted in such a way that only the user will be able to access this information. At night, the new Apple Watch will measure your temperature every few seconds, giving you a lot of accurate information about your sleep cycles. 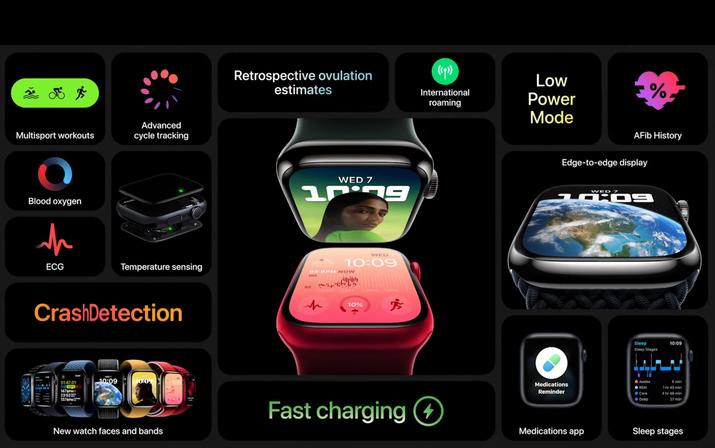 Another novelty is the call crash detection, which will detect if you have had a car accident. If it detects it, it will call the emergency services and the emergency numbers you have saved, sending its GPS position to the security services. This is possible thanks to a new accelerometer, which is capable of detecting different types of accidents in vehicles, depending on where the collision occurs.

This new Apple Watch 8 has a battery of 18 hours of autonomy, although it has a new mode to reduce the functions of the device and give us 36 hours of battery life. Abroad, in addition, it will allow us to roam with this new device. It will arrive in four different colors, and with three different finishes. We will also have a series of new straps available. It will be available on September 16 starting at $399.

On the other hand, the new Apple Watch SE will be available in three different colors, with a 100% recycled aluminum structure. This new Apple device also has the same sensors as the Apple Watch 8, so it will also be able to report traffic accidents. The new batch of SE will be 20% more powerful than the previous one, and will be available on September 16 from $249 for its version with GPS. 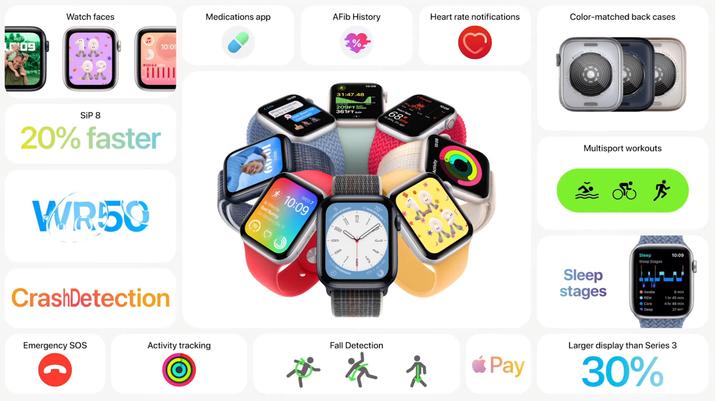 The witness of the previous ones has been taken by a new Apple product such as the Apple Watch Ultra. Its structure is made of ultra-spatial titanium, which ensures a much greater resistance than the previous one. It is designed for extreme activities, with a 49mm frame. It has 3 microphones in this structure to be able to answer calls even in the most difficult situations. Its impressive autonomy is 60 hoursquite a record for Apple.

It is designed to be the best smartwatch for physical activities. Its dual frequency GPS will make it much more accurate., and according to Apple will offer the highest accuracy on the market. With the inclusion of a new action button we will have the possibility to start physical activity programs more comfortably, and we will be able to go from one mode to another on the watch with just one press. The compass app has been redesigned to offer much greater precision, and is capable of marking the places where the user passes to mark a path back to the same starting position. 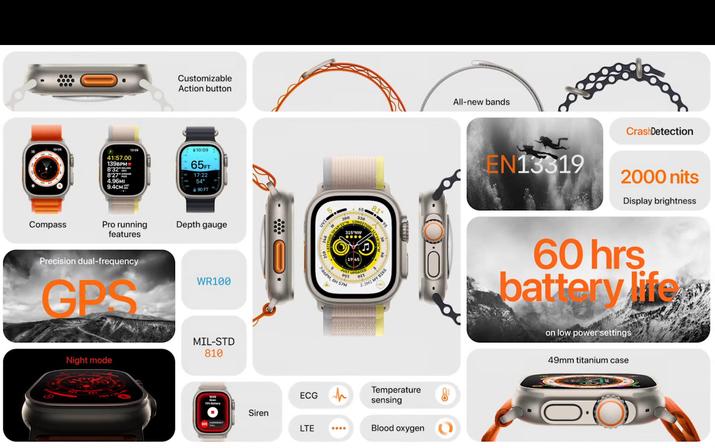 It has a signal of 86 db to alert the position in an emergency. It is designed for water sports as its water resistance has been greatly improved. In fact, it has the En13319 certification, for products used in diving. This new Ultra will have all the features in addition to the 8 series, and will be available on September 23 at the price 799 dollars.

The new AirPods Pro have a new H2 Chip, an improvement on the H1 with better connectivity and a better audio experience than the previous AirPods Pro. In addition, these new headphones will have a new feature called Spatial Audio that, according to Apple, will make us feel “like on the stage”. It will adapt to our head and our ears to give us a most immersive experience. These headphones will also have active noise cancellation, also in the microphone. 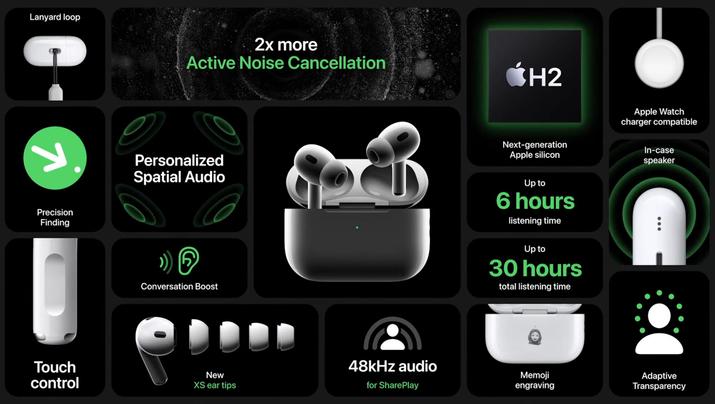 The headphones will come with different accessories for the tip, so that each person can find the one that best suits their ear. The new processor will make the Adaptive Transparency technology limit outside sounds automatically. If we talk about control, these Airpods Pro will have a touch sensor with which we will have more control of our device. They will have an autonomy of 6 hours, which will become 30 hours counting the battery of the cover. A novelty is that we can charge our headphones with the Apple Watch charger.

These new Apple headphones will be available on September 23 at the price of 249 dollars.

This year we will have two different iPhone models, the base version being 6.1 inches and the iPhone 14 Plus 6.7 inches. Both models will feature the Super Retina XDR Display screen, with a maximum brightness level of 1200 nits. It will be resistant to dust and water, and will hit the market in 5 available colors. These iPhones will have the best battery ever made for an Apple iPhone.

They will mount the A15 Bionic chip, which will ensure greater power for these two devices. It will use a 12-megapixel main photographic sensor with a much faster aperture, the photographs being 49% better in low light situations. The front camera will also be 12 megapixels with an autofocus sensor, and will offer us 38% better performance in low light situations, which in fact will be twice as good as the images made by the iPhone 13. 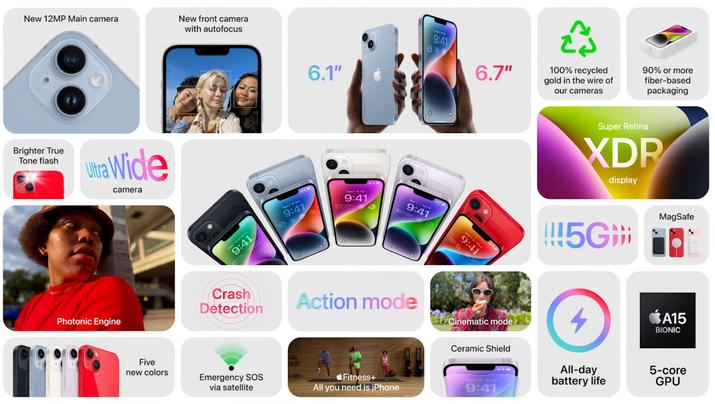 If we talk about video, we will find the new Action Mode, a way with which we can record real wonders in motion and that will also be capable of recording with Dolby Vision HDR. This new device will of course be 5G, and one of its main novelties will be seen in the eSIM, since the American models will dispense with traditional SIMs for the first time.

These new iPhone 14 have the same accident detection function as the Apple Watch, so we can notify emergencies and our contacts in case of accidents. It also comes with the novelty of Emergency SOS via satellite, which will allow us to point to a satellite to be able to send emergency messages if necessary. Apple has created a series of standard messages with simple questions so that we can communicate with emergencies more quickly, something that could save our lives. This new feature will arrive in the United States and Canada in November, and it will be free for two years with iPhone 14. The base iPhone 14 will be available starting at $799 and the iPhone 14 Plus will be at 899. The first of them will be available on September 16, and the iPhone Plus on October 7.