The Dimensity 9000+ SoC outperforms all Qualcomm SoCs, according to AnTuTu

If you have to choose a word to define the work that MediaTek has done with its Dimensity 9000+ integrated, that word is beast. An integrated presented at the end of June and that, as we told you at the time, arrived with the firm intention of fighting Qualcomm and Samsung for the gold medal, with their Snapdragon and Exynos families respectively. Something that seemed quite feasible in view of his specifications, and that would have finally been confirmed this September.

Let us remember that we are talking about a SoC based on ARM’s V9 CPU architecture in a four-nanometer manufacturing process, with an Octa-Core configuration that includes a 3.2 gigahertz Cortex X2 corethree Cortex-A710 cores at 2.85 GHz and four Cortex-A510 cores focused on efficiency, which are accompanied in the graphic section by a powerful Mali-G710 MC10 GPU. Regarding its memory support, this Dimensity 9000+ offers compatibility with LPDDR5x RAM of up to 7,500 Mbps (20% more efficient than LPDDR5), with eight megabytes of L3 cache and six megabytes of system cache. That said, a SoC called to preside over the top of the table.

And as we can read in Mydrivers (in Chinese), the technology has achieved it, since the MediaTek 9000+ is positioned as the SoC of the smartphone with the highest performance of those evaluated with AnTuTu. And of course, the final performance of a device does not only depend on the SoC, I know, but when talking about the top of the range that compete in this segment, we find quite similar conditions between them, which indicates that the SoC is, at least , an essential part of the equation. 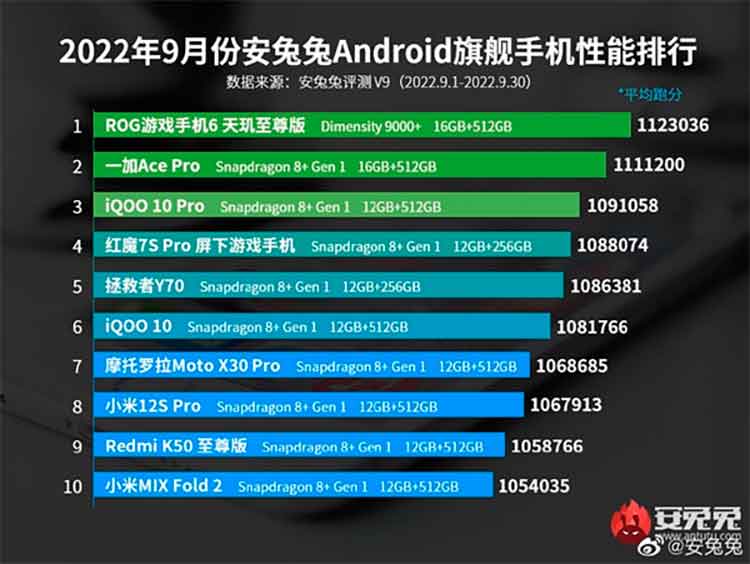 And which smartphone is the one that has been crowned the best performer so far in AnTuTu? Surely you have already imagined that it is a gaming smartphone, right? Well, you’re not wrong, and the fact is that the protagonist is none other than a beast that was made public just a couple of weeks ago, the ASUS ROG 6D family. And it is that, subjected to this popular benchmark, it would have obtained a whopping 1,123,036 pointscompared to 1,111,200 of the model identified in the table as OnePlus Ace Pro, which is the name in the Chinese market of the OnePlus 10T 5G, presented at the beginning of August, and which integrates a Snapdragon 8+ Gen. 1.

This does not mean, however, that Qualcomm has lost the magic. Quite the contrary, if we review the classification we can see that positions 2 to 10 are occupied by devices with a Snapdragon 8+ Gen. 1, which confirms that the performance of the most recent top-of-the-range SoC of the technology remains, for many, as the reference. Of course, after years leading the tables, seeing that this Dimensity 9000+ has been able to climb to the top of the table should undoubtedly be an incentive for Qualcomm to step on the accelerator again… something that will be worth seeing .