TechSmartAerezona Developers
HomeTech NewsArtificial IntelligenceTesla already has a prototype of its Optimus humanoid robot. And...

Tesla already has a prototype of its Optimus humanoid robot. And he wants it to cost less than a car

More than showing off the results of an already completed project, it was about showing steps forward and setting a direction and that, precisely, was what Tesla’s 2022 AI Day focused on, held yesterday in Palo Alto. Between grandiloquent proclamations about “a future of abundance” or “transformation of civilization”, Elon Musk and his team presented the progress of the firm in one of your most ambitious projectsand of course media: his robot prototype.

If in 2021 the company shared little more than a concept that could only be visualized with infographics and a person dressed as a humanoid robot, yesterday it went several steps further by showing a prototype of its Optimus ingenuity that provides an initial impression of its mechanics and appearance.

It was Musk himself who was in charge of giving way to a first prototype, an initial version of Optimus that the multinational refers to as “Bumble C” and that already allows us to appreciate part of its mechanism. The robot showed how some of its joints work, walked stiffly across the stage, waved, and did a short dance that tested its stability.

“I was able to do much more”

There were no great technical boasts on stage, nor turns that could compromise the humanoid mechanism and leave an episode like the one that Tesla starred in several years ago with the Cybertruck, when a supposedly “indestructible” glass shattered during a demonstration with the public. With Optimus, he played it safe. Even Musk acknowledged that it was the first time that the bipedal robot had worked on its own, without the support of “any type of support, cranes or cables”.

“can do much more of what we have just taught you. We didn’t want him to fall on his face, so now we’re going to show you some videos of the robot doing a bunch of other stuff,” Musk joked before his team aired some footage of Optimus doing basic tasks like picking up boxes or watering. Always connected, yes, to a subjection.

The company showed a second version of its robot, with a more finished exterior appearance and “very close to production” of Optimus; but that required help from a support and technicians.

The demonstration served the firm, in any case, to unravel some of the technical characteristics of a project that feeds largely on the experience accumulated by Tesla in the development of cars and autonomous driving. Optimus shares, in fact, AI software and sensors with functions included in the driving assistant of their cars.

The Bumble C prototype is equipped with a 2.3kWh battery pack, “perfect” -explained a Tesla technician- to develop “approximately a full day of work”. The device also incorporates a Tesla SoC and offers WiFi and Long Term Evolution (LTE) connectivity.

Tesla is drawing on its experience with Autopilot software in its development. “It’s going from a robot on wheels to a robot on legs,” explained an employee. The goal: to overcome the obstacles to achieve a working prototype, something they hope to achieve “in the next months… or years”. 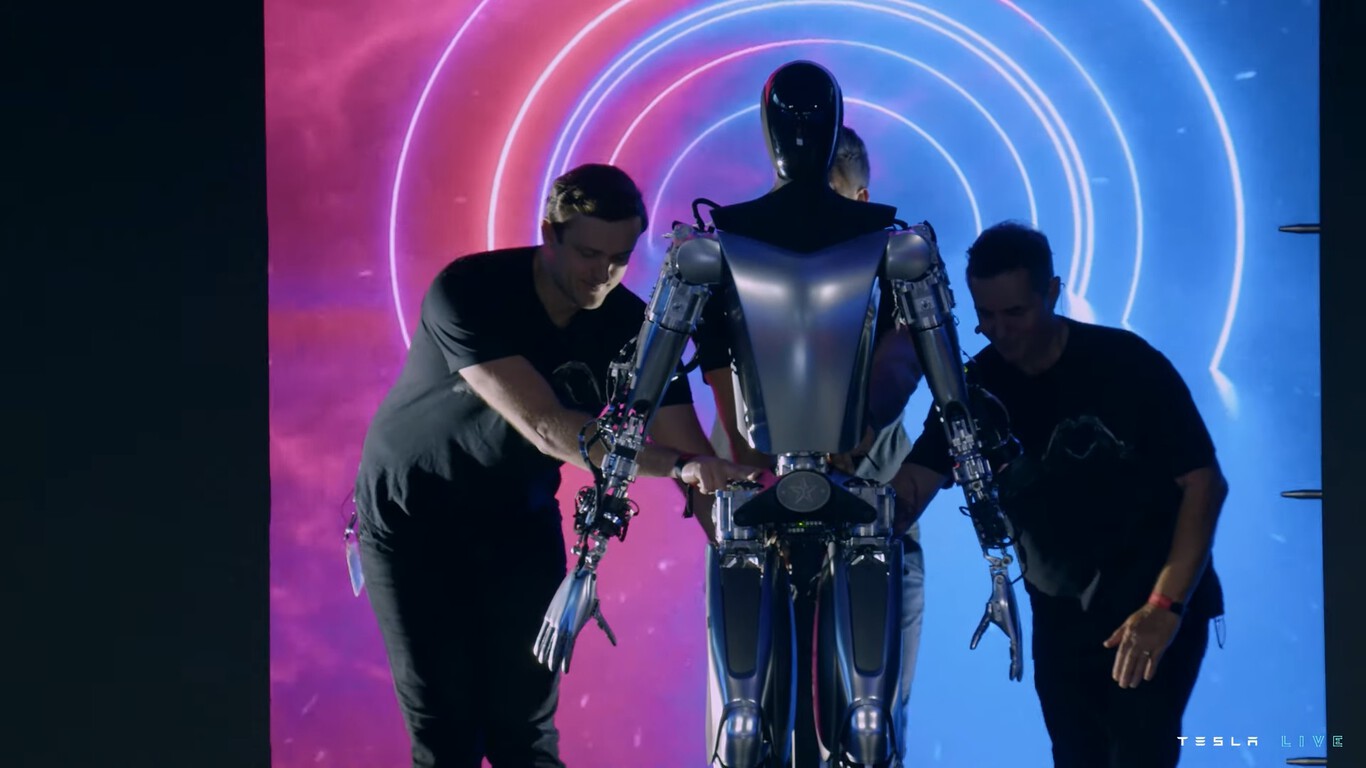 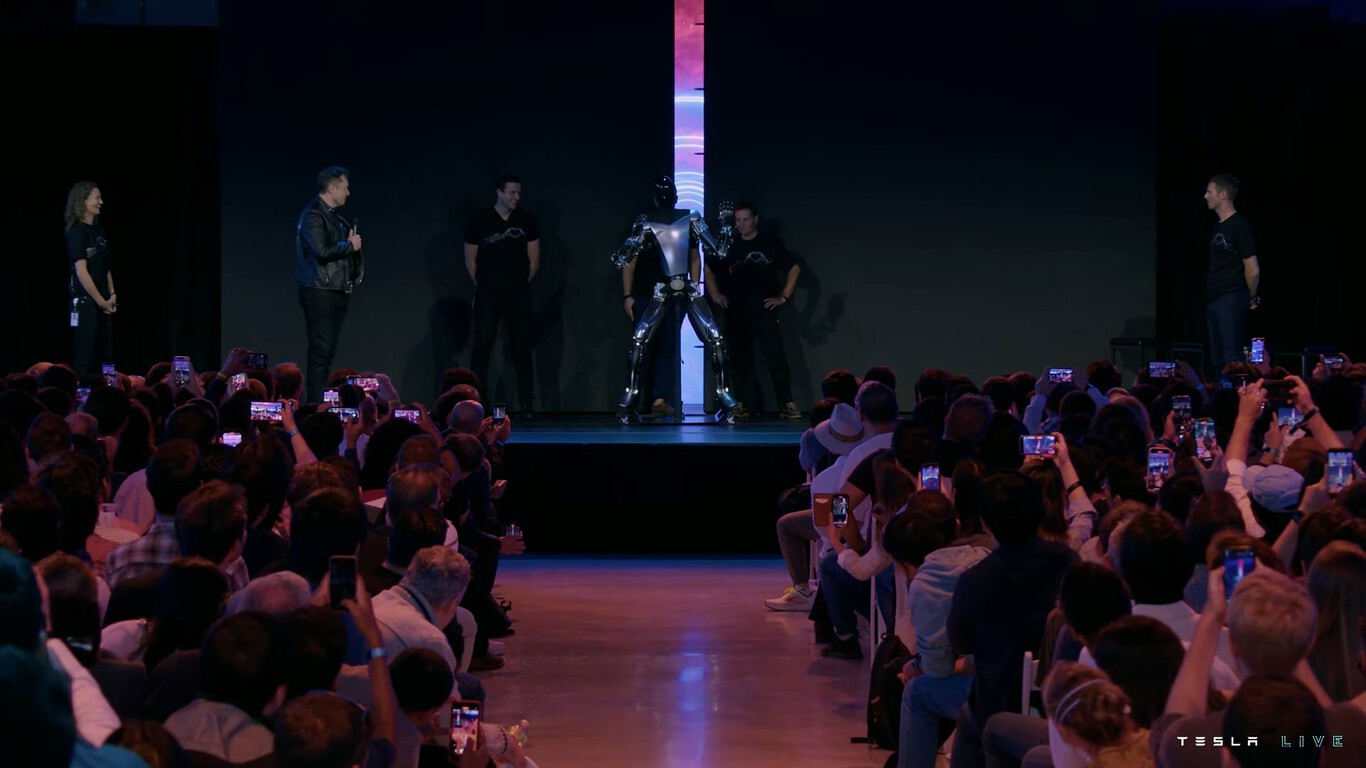 Tesla’s goal is to end up developing a “useful humanoid robot as soon as possible” that can be manufactured in large quantities, with high reliability and at a low cost.

“Impressive robot demonstrations have been seen. And that’s great, but they lack a brain, they don’t have the intelligence to navigate the world on their own. They are also very expensive and are manufactured at a low volume, “Musk acknowledged during the presentation. His signature points in another direction: to create “capable” devices that can be manufactured in millions of units and marketed at a much lower cost than a vehicle. In fact, he provided a figure: less than $20,000.

The plans of the American multinational go through testing the devices in their own factories and testing their capacity as workers. During his presentation, the CEO of Tesla did not hesitate to actually draw a utopian future in which the robot will be able to “help millions of people”: “A future of abundance, a future where there is no poverty, where people can have what you want in terms of products and services. It is a fundamental transformation.”