The Tachyum Prodigy is a CPU that, of course, will not leave anyone indifferent. If it seemed exaggerated to you that a high-performance server processor had a configurable TDP of 280 watts, surely you had to sit down when reading the power supply that the new Tachyum requires.

In general, a 1,000-watt source is more than enough to power a high-end computer, in fact, in my review of the GeForce RTX 3090 Ti, I did not need to exceed that figure to move this graphics card, and the rest of the computer, with all the guarantee. This graph has a 420 watt TGPa high figure although understandable considering the performance it achieves.

Typically a high-performance server CPU typically has a TDP below 300 watts, but the Tachyum Prodigy is the exception to the general rule, and it is that this 64-bit monster with 128 cores at a frequency of more than 5.7 GHz has a TDP of 950 watts.

Taking a look at the diagram of the Tachyum Prodigy we find a silicon that groups 128 cores arranged in a consecutive way, and that is flanked by the memory controllers and the PCIe Gen5 lane complexes. In total, it has 64 PCIe Gen5 lanes and supports DDR5 memory configurations on 16 channels with a frequency of more than 7,200 MHz, which leaves us with a bandwidth so enormous that it can reach 2 TB/s.

The Tachyum Prodigy T16128-AIX, which is the top-of-the-range processor within this new generation of high-performance Tachyum CPUs, can work without problem in configurations of two and four sockets, uses a totally customized architecture that is able to work without problem in x86, ARM and RISC-V environments, and also with FP64, FP32, TF32, BF16, INT8 and FP8 operations. According to Tachyum, a rack with Prodigy T16128-AIX CPUs is capable of offering up to 6 times more performance on INT8 than one with NVIDIA H100 graphics accelerators. 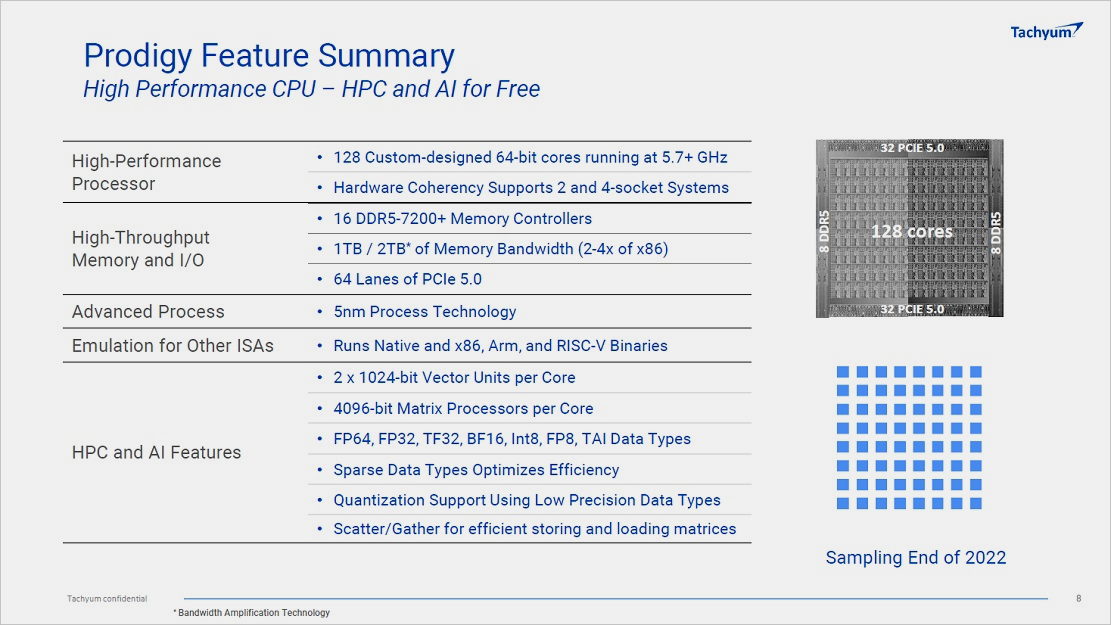 The Tachyum Prodigy will arrive in more modest versions

There is no doubt that the Tachyum Prodigy T16128-AIX is a real beast, both in terms of performance and consumption, but this will not be the only version that will hit the market later this year. Tachyum has confirmed that it will launch other versions with lower consumption, and that there will be other models with a smaller number of cores.

The Tachyum Prodigy T832-LP will be the cheapest and most energy-efficient variant. It will have 32 cores at 3.2 GHz, support eight-channel DDR5 memory configurations at 4,800 MHz, and offer 32 PCIe Gen5 lanes, all with a TDP of 180 watts. This will have a version higher than 5.7 GHz with memory support at 6,400 MHz, whose TDP will be 300 watts. I know that the TDP is not directly equivalent to the real consumption of a processor, and that this is usually higher, but It serves as a reference to have a starting value of it.

A very interesting generation of processors, even if they are aimed at the professional sector, because they confirm that there is much life beyond the classic x86 designsand they are an example that it is possible to create very powerful and very competitive solutions despite the limitations currently imposed by classic standards and the licenses required to access certain IPs (intellectual property).

How to watch Paramount+ from your Mac

Paramount+ is known by the Apple community as one of the great platforms through...
Apps

How to know what version of an Android app you use

The apps are updated at a frenetic pace, and to have the latest features...