Steam Deck: what games are supported?

There are only hours left for Valve to start shipping the first Steam Deck, seven months after the company finally confirmed rumors that it was working on a portable console. Since then, we have been waiting for its arrival with high expectations, since the proposal is quite promising, but also with a question that stands out above the rest: Steam Deck’s compatibility with the games in the Steam catalog.

A first assessment in this regard by Valve was, in my opinion, somewhat triumphant:

«All the games we wanted to be playable, it’s actually the entire steam library. We haven’t really found anything this device can’t handle yet.»

This, at the time, made us wonder under what conditions the Steam Deck would be able to “move” the entire Steam catalog, since there are many factors that must be taken into account so that such particular hardware is capable of adequately managing such a wide catalog of games, which is also a particularly demanding type of software.

Thus, after such strong statements, Valve decided to take a more reasonable stance, and from mid-October began a complete testing program to check the compatibility of each title with the Steam Deck, a considerable effort, and the results of which we learned for the first time a little over a month ago, with the announcement of 42 compatible titles . A good start, but one that points to a long future until the company can offer high-volume verification of its catalogue.

Work has progressed since then, but the situation has reached a point where list publishing is no longer an effective method, especially for those with a large library. The good news is that Valve is aware of this and, in response, they have created a web page where each user of the service can check, in a personalized way, the compatibility of the games in your library with Steam Deck.

As for the parameters that determine the level of compatibility of games with Steam Deck, again we find four groups:

Thus, when you access that page, where you will have to log in with your Steam credentials, after a short introduction explaining what we have told you, you will be able to see the four groups that I indicated before, with all the games of your library that have that level of compatibility with the Steam Deck. The only exception is the group dedicated to not yet tested, in which only the number is indicated.

Depending on the number of games you have in your library, each group may initially show you only a portion of the games in that group, with a show more button at the bottom of it. In my case, this is the full compatibility summary of my library:

The process, as indicated above, will take time. In my case, I have a total of 695 games, of which 32 are verified, 41 are playable, eight are unsupported… and 614 have not yet been tested:

Why is a game not compatible with the Steam Deck?

The list, per seit only tells us which games are in each of the categories (except the untested), but something that Valve has done very well is that we can expand this information for each title in particular. A) Yes. If you hover your mouse pointer over a game and wait a moment, more information about it will be displayed, and at the bottom of the game you will see a blue button with the text “Steam Deck Support”. A click on it will show you the full compatibility report: 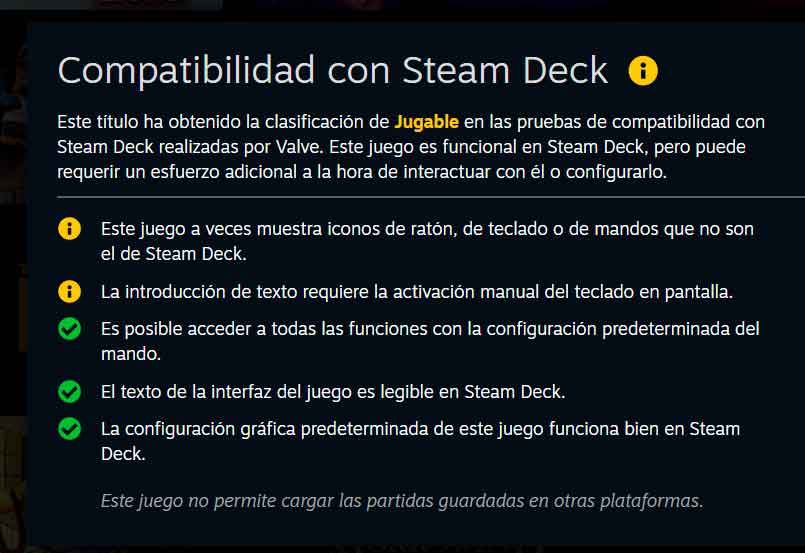 With this new website, Valve makes available to users a very useful tool for all those people who are considering buying a Steam Deck, but who have the logical doubts regarding its compatibility with their games. In addition, thanks to the fact that its information will be constantly updated, it will be possible to check if any of the games that are not currently compatible become compatible at some point in the future.