Spotify buys a company to convert text to speech

Due to the consequences of throat cancer, actor Val Kilmer lost the ability to speak years ago. Even so, in the last film in which he has participated, «top gun: Maverick“, he is heard briefly speaking with the protagonist, Tom Cruise, with the difficulty that his character shares with the actor.

In order to recreate her voice, the studio relied on the services of Sonantica company specializing in artificial voice generationwhich he achieved through an artificial intelligence that took previous recordings of the voice of actor Val Kilmer as patterns.

Now spotify has acquired Sonantic for an amount that has not been disclosed. The reasons for this acquisition by Spotify have also not been specified by the platform’s Vice President of Personalization, Ziad Sultan, beyond expressing the excitement of having the voice synthesis technology with which they will be able to “create new experiences for users”. 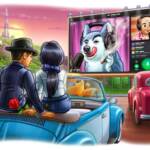 Sultan points to an incidence of this technology in terms of the possibility of offering more personalized experiences related to the capabilities of transforming text into speech. they quote environments in which the user cannot pay attention to the text that appears on the screen of a device (for example, while driving a vehicle). There would also be the possibility of applying Sonantic’s speech synthesis artificial intelligence to convert recommendations and descriptions that appear on the screen in text form into speech.

And it is to be anticipated that all these applications will be carried out by Spotify within its own platform, to expand the functionality and comfort in managing it for its users. This is the opposite option to that offered by applications such as Scribbn, which converts voice messages received through WhatsApp to text.