Sony’s top-of-the-range OLED TV is a mature and technically flawless product, which now only lacks HDMI 2.1. 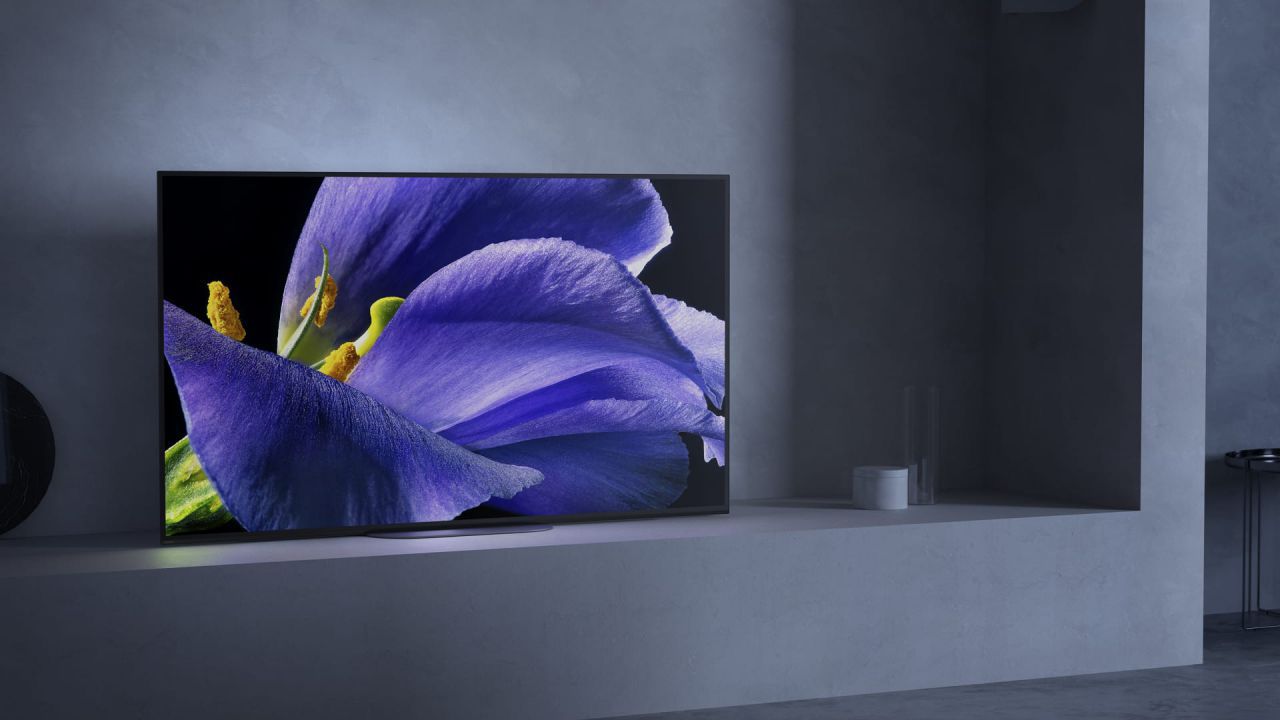 When you buy a high-end OLED TV you always fall on your feet. Whether it’s a Panasonic, an LG or a Sony, the quality is at the highest levels, with small differences that make you lean towards one TV rather than another. Among the brands, we tested during 2019 and the beginning of this 2020, Panasonic is the one that has focused more on image quality, with the best-calibrated televisions we have tested.

LG has the advantage of offering various functions of HDMI 2.1, to which is added also the NVIDIA G-Sync, for TVs with a strong gaming spirit. Sony instead, strong of almost perfect 2018 models, has focused again on the same technologies. The result is this AG9, a TV that offers incredible design and image quality, but which lacks a little courage to be able to stand out from the others on the technological front.

Design: the most beautiful TV you can buy 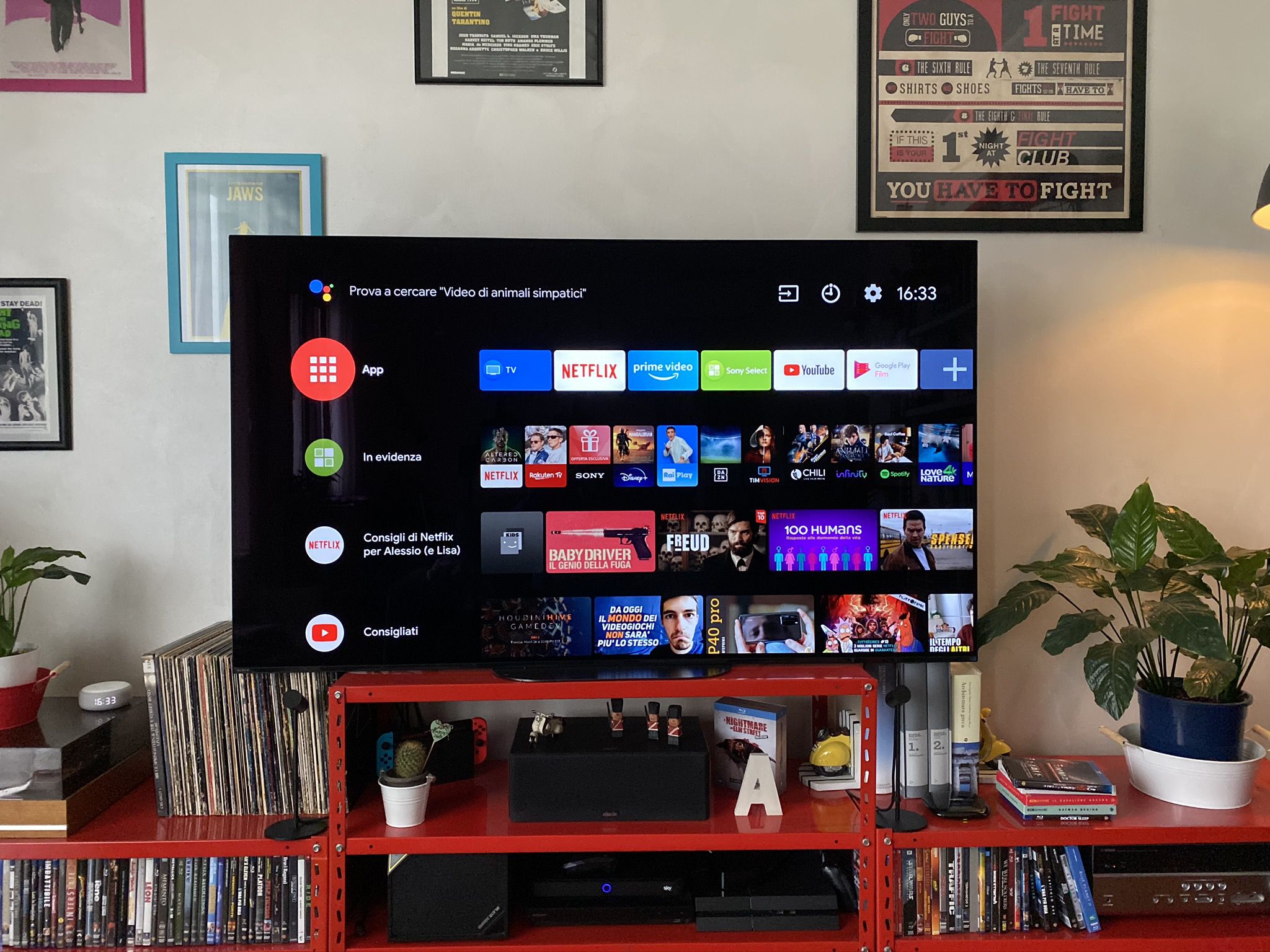 We say it without any doubt: Sony AG9 is the TV we liked most on the design front. We were lucky enough to try the 65-inch variant, the largest available, and the result, once the TV is turned on, is to be faced with a real wall of images. Sony listened to user feedback and eliminated the mobile rear stand which made it slightly tilted back, preferring a more traditional one. Unlike other brands, however, the one designed by Sony is practically invisible, the TV in fact seems almost suspended on the support surface, since there is no space between the panel and the base on which it rests. The metallic edges around the screen are thin, only the lower one is more pronounced, but the result is still incredible.

On the back the electronics and the connections are covered by a plastic material of fair quality but not exceptional, but it is a marginal problem, in fact this part is hidden from view. The absence of the mobile rear support also makes wall installation easier.
News come from the remote control, renewed and now of superior quality, thanks to the metal shell on the front, which remains plastic in the rear. The backlighting of the keys is missing, which on a TV costing almost € 2800 online we always expect to be present, but the improvement is clear compared to AF9.

On the connections front, there is everything that a 2018 TV must-have. We have not got the wrong date, in fact we find 4 full-band HDMI 2.0 (18 Gbps), but there are no HDMI 2.1 and there are not even some of the features that characterize them.

It is true that this is a TV released in 2019, when the fever from the Next-Gen console was lower, but given that Sony will be one of the protagonists of the next gaming season, and that AG9 will remain on the list throughout 2020, we would have expected more attention towards the gaming world. The only available function of HDMI 2.1 is Dolby Atmos with eArc connection, no VRR and no 4K at 120 Hz unfortunately. 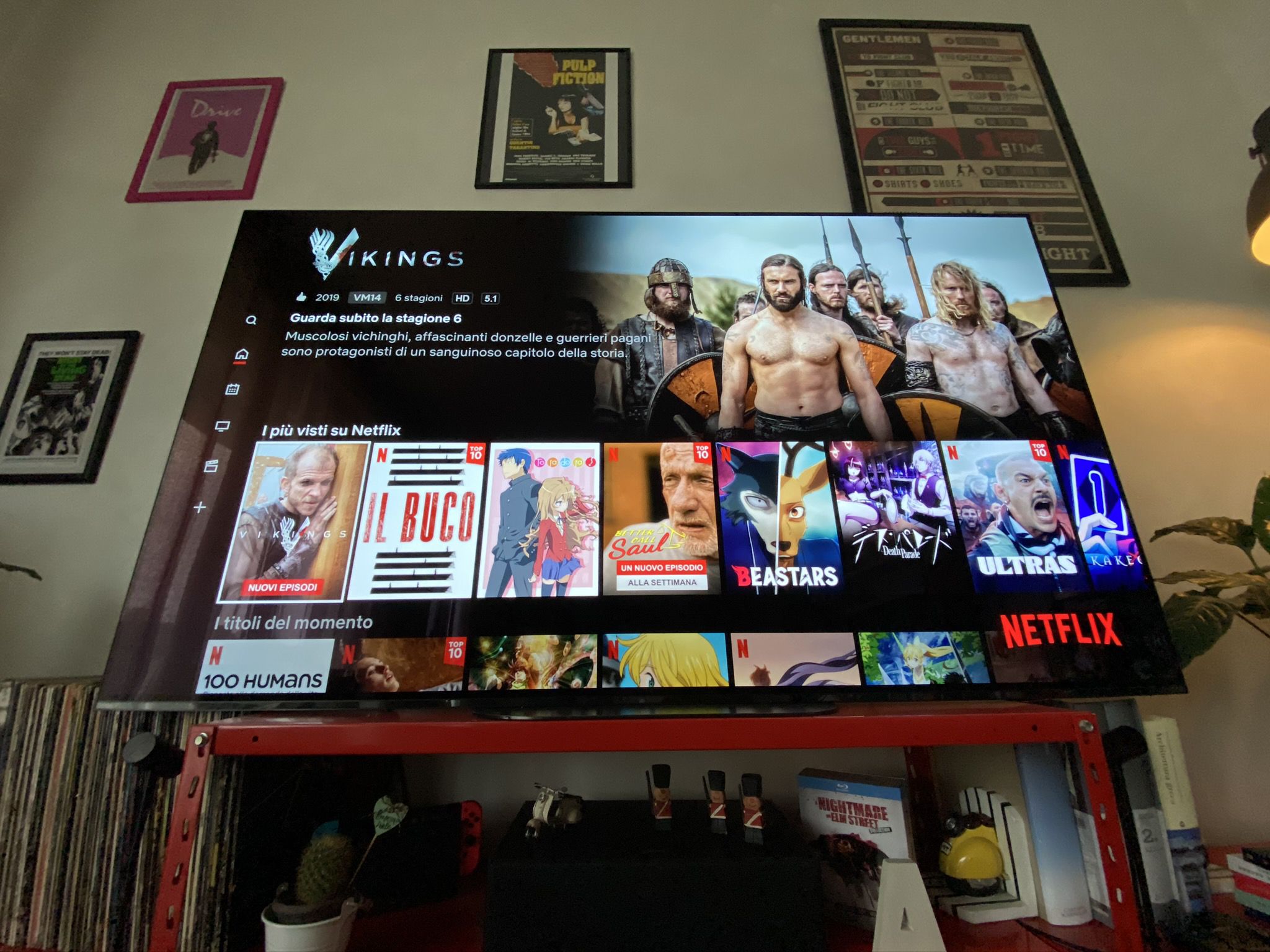 Sony AG9 has a 4K OLED panel produced by LG, capable of handling almost all HDR formats, including Dolby Vision. The appeal is missing HDR10 + but its low diffusion does not make it a real necessity, for now, Dolby is winning the battle for the supremacy of HDR standards. The image processor has not changed since AF9 and remains the excellent X1 Ultimate, with all the technologies that characterize it. We, therefore, find functions for increasing the level of detail and for the scaling of contents, or Super Bit Mapping which improves the transitions between colours, thus avoiding the appearance of halos that are unpleasant to the eye.

All functions that should be deactivated to have content faithful to the original one, but which may be of interest to a wider audience. There is also the excellent Motionflow for motion management, one of the best (if not the best) technologies of this type. Do not miss the automatic calibration via CalMAN, which still needs special software and a detection probe. Speaking of calibration, white balance is available in 2 and 10 points directly from the TV settings, which become 20 with CalMAN software.

On the audio front, we find the Acoustic Surface Audio system+, which reproduces the sounds directly from the panel thanks to the actuators located on the rear of the TV. In the previous AF9, the system consisted of 3.2 channels, which drop to 2.2 channels in this AG9. 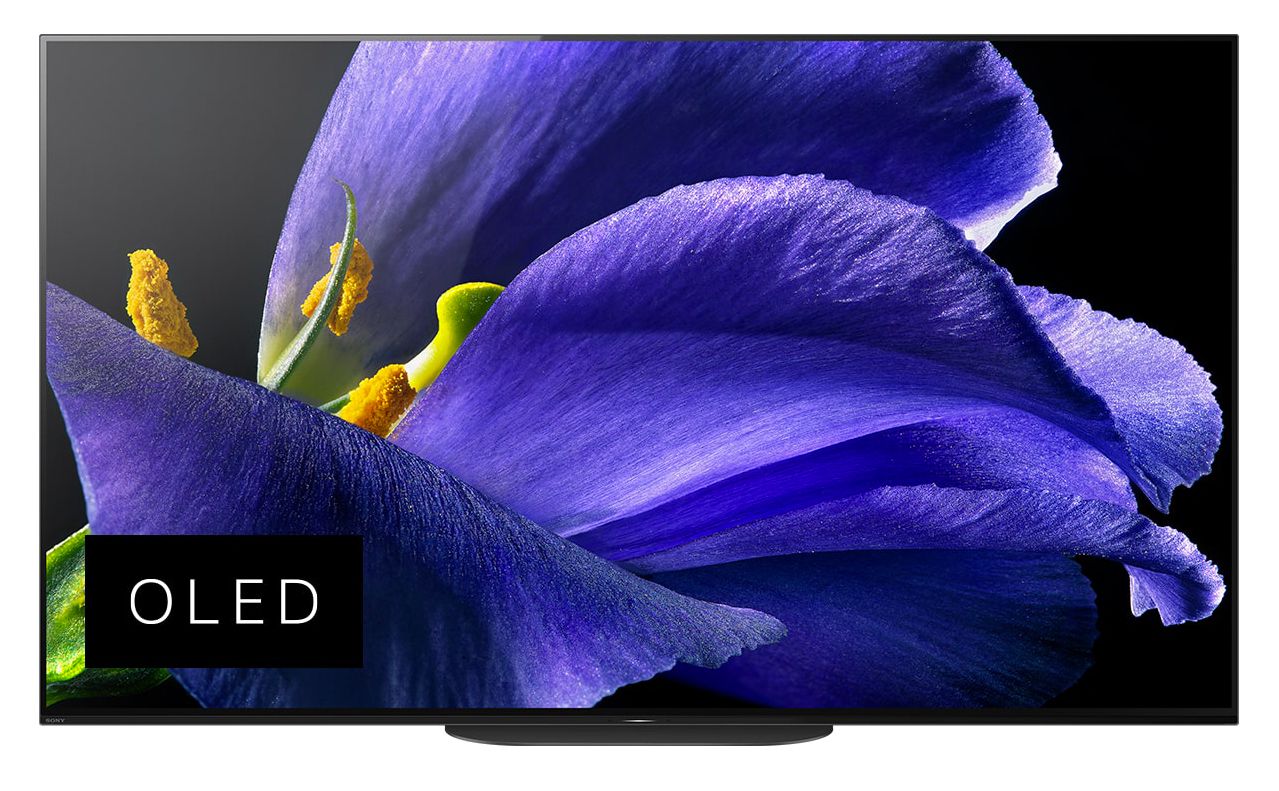 The Android 9 operating system is managed by the Mediatek MT5893 processor, a Quad Core with Mali-G71 GPU. Strange the choice to reduce the amount of RAM compared to the 2018 models, it goes from 4 to 2.5 GB, with about 6 GB for data storage.
A welcome addition to the previous models, especially for Apple users, is the compatibility with AirPlay and full support for Apple TV+, with which to make the most of apple phones. 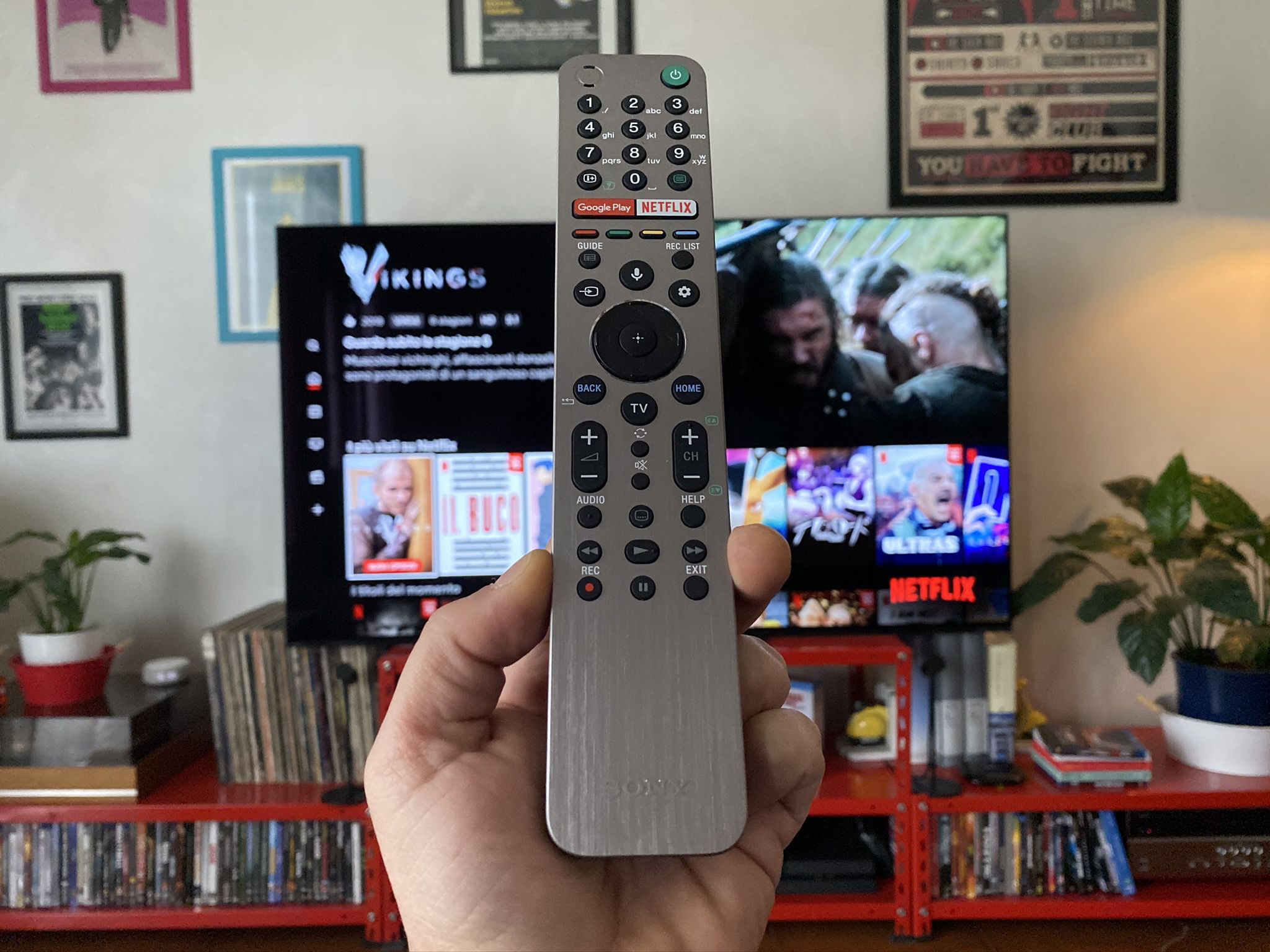 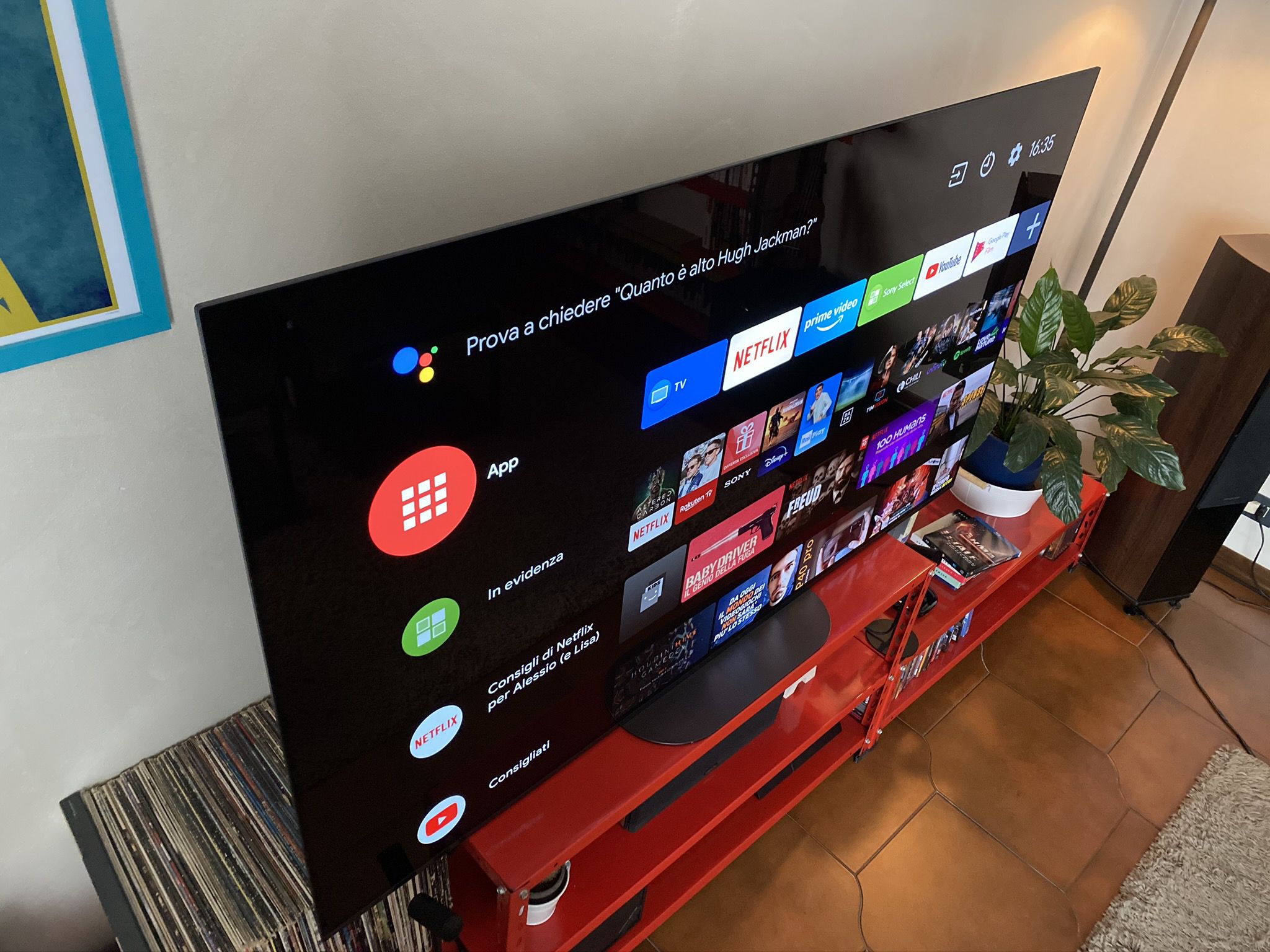 The first question that arises is whether the lower amount of RAM has an impact on the performance of Android 9. The answer is no, the operating system works well, probably with Android 9 Google has optimized resources better and now they need less for make it go decently. We are not at the speed levels seen on NVIDIA’s Shield TV, there is some small uncertainty, but nothing to worry about. For the rest there are no changes in the functions, the interface has been slightly revised and all the most important streaming applications are present, including the recent Disney +, which landed on March 24, the first day of availability of the service in Italy.

On the video quality front, we are in front of one of the best televisions you can buy today, as was its predecessor. Do you see the difference compared to AF9? Without tools no, OLED screens have now reached a high maturity and it is really difficult to bring out something more than in the recent past. Obviously AG9 gives its best with content in 4K and Dolby Vision, where the quality of the panel and electronics of Sony come to the surface.

The Japanese company has focused on a slightly different approach from competitors however, limiting the light output with HDR content to around 600-650 nits peak. The very high contrast offered by the TV, however, makes the lower brightness less evident, which also preserves the panel from any image retention phenomena. Precisely for this reason, unlike other televisions, with Dolby Vision active we preferred the “light” mode instead of the dark one when viewing in a partially illuminated room.

With non-HDR content, the quality remains high, net of the limits of the source, and here comes the X1 Ultimate image processor, which applies excellent content upscaling. With Rec.709 colour space, the factory calibration is good, with a dE of 4, not the best we have seen this year but the error is still contained.

Once calibrated AG9 offers a dE of 0.6, but if you want you can go down a little bit with a more accurate calibration, an exceptional value and practically on par with the reference monitors.
With non-HDR content the presets to choose are the “Cinema” and the “Personal” ones, which come closest to the reference values ​​with the factory settings.

Game mode input lag is around 27 ms, few but also here we have seen better products. The Sony Master series, to which this AG9 also belongs, was created to meet the needs of image purists, but a greater focus on the world of gamers would be appreciated, especially for the importance that this company has in the sector.

The audio performance was very good, we had appreciated the Acoustic Surface Audio + system in other models and it is confirmed as one of the best integrated in a TV. The absence of a channel compared to AF9 is practically irrelevant, we have not made a direct comparison since we did not have the old model available but we did not notice any differences.

The bass is felt, especially if you consider the average level of the televisions, acting on the settings you can calibrate the sound space well to have a warmer and more immersive performance. Sony has done a good job in the audio field in recent years and this AG9 also fully confirms this. 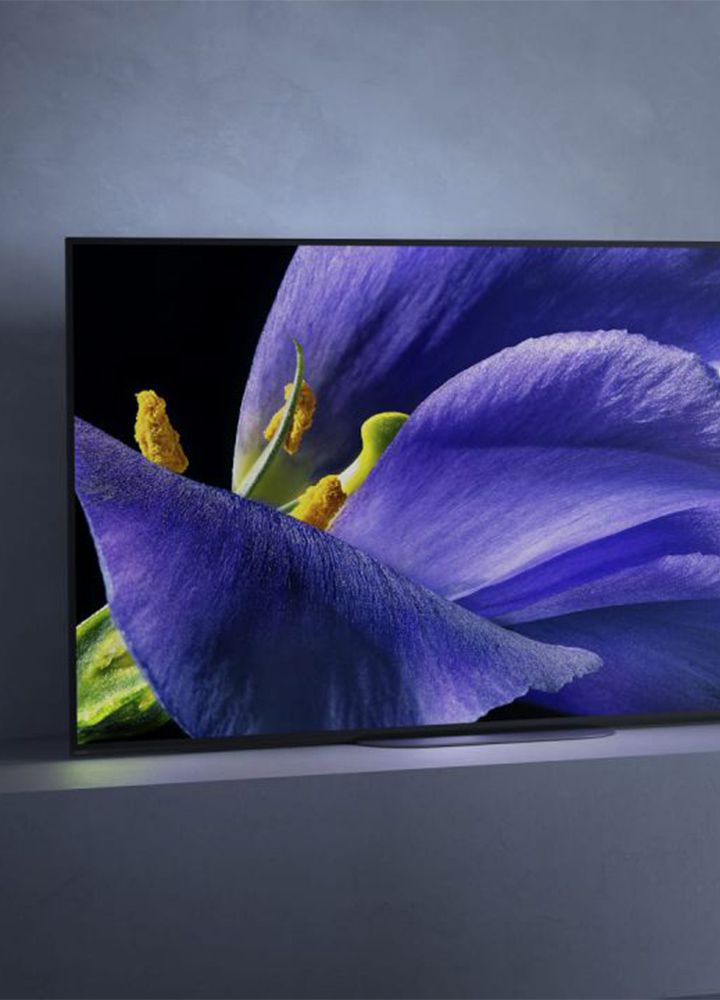 Sony AG9 Master is one of the best televisions that can be bought today, especially in this 65-inch version. Design, attention to detail and quality of vision are at the top of the category, only innovation is missing from the previous model. We did not expect big news, the OLED panels will not undergo major changes until at least 2023 and already with AF9 Sony had reached very high-quality peaks.

To give the sensation of novelty, the Japanese company could have focused on gaming, inserting some of the technologies available with HDMI 2.1 in this model, but this was not the case.

Despite this, Sony AG9 remains a TV to buy with your eyes closed, beautiful when turned off and of high quality once turned on.

realme 10 Pro +, this is the mobile that comes with a 120Hz curved screen

realme has launched two new devices today, the realme 10 Pro and the 10...
Europe

The European Union, a bold and complex political project that traces its origins to...