Song of Iron is a game created by a single developer who, despite failing to shine completely, has left us feeling good.

Originally Song of Iron was a simple side project for Joe Winter but over time it has turned into an ambitious goal to achieve. Thanks to the support of his wife and thanks to an original soundtrack created by a talented composer, Winter has created a title based on Nordic scenarios, bloody combat and platforming stages, confirming the fact that with hard work, the right skills and … the Unreal Engine, it is now possible to do great things alone. Speaking of Norsemen, check out our preview of God of War: Ragnarock as well

From the undoubtedly spot on atmospheres and the fights based on a cinematic “heaviness”, we have been interested in Song of Iron from the very beginning, eager as we were to find out what heights it could have pushed. Now that we’ve done it, after about 4 and a half hours of gameplay, we are ready to go into the matter and tell you about the lights and shadows of this “one man army” project.

From vengeance trip to … something more

Song of Iron opens by staging the greatest of pains. A man or woman, depending on the sex selected, watches impassively as the body of a loved one slowly consumes, set on fire on a funeral pyre shortly before. Responsible for his own and the deaths of many other innocent people is the Wolfrick clan, who with unprecedented fury struck the village to burn the long houses and snatch dozens of souls from life. Driven by the hunger for revenge and by the last words of his beloved – who before dying asks him to bring a medallion to the Great Temple of the Gods to demand their help in battle – the warrior begins a long journey through forests, dark caves and snow-capped peaks, with the hope of eradicating the Wolfrick clan from the face of the Earth.

The narrative premises of Song of Iron would not be defined as original but if nothing else they represent the perfect excuse to embark on a pleasant adventure, albeit net of some critical issues not just (which we will talk about shortly). From mortal rivals to “divine” beings – but it is right for you to find out who we are referring to – the characters turned out to be rather flat but on the other hand the plot developments in the final phase of the journey they genuinely surprised us. It would be criminal to explain what we are talking about but know that Song of Iron, from which sequels could spring, proposes a bold and unexpected ending, especially for such a small production. Unfortunately this surprise section does not last long enough, it does not unbutton in terms of revelations – although you can connect the dots to get a general picture of the situation – and it comes only after a few phases that weigh down the progression.

The long and tiring struggle of a wandering warrior

The title of Resting Relic is the most classic of action adventure with platforming elements, as it combines exploration (without properly secondary paths), battles to the death and sections in which our bearded fighter must overcome deadly traps. Unfortunately, despite being characterized by some good ideas, the components of the playful recipe they did not fully convince us and for different reasons. In our preview we spoke positively of the feeling of “physicality” returned by the protagonist’s attacks, not referring only to the blows of the sword or ax but also to his well-aimed kicks to push away the enemies (given the quote, we leave you to our preview by Iron of Song).

Clearly, pad in hand the sensations can change and unfortunately in this case it was. For starters, once the enemies start attacking they do not stop when they are hit by blows, hence the need to eliminate them as quickly as possible and the problems of using two-handed weapons or “loaded” attacks. When you find yourself surrounded by opponents – a condition that requires you to make the best use of both the parry with the shield (where possible), and the somersault / dodge – it is really uncomfortable and even harmful to resort to heavy blows, thanks to a control system from the not very refined responsiveness. For the same reason, the jumping ax is beautiful to admire but not very useful, like archery. Given the difficulty with which it is possible to score the arrows and the intricacy of the aiming system, we quickly forgot the offensive style at a distance, in favor of one-handed weapons. In this regard, during the long journey the warrior finds trunks containing the pieces of armor with prodigious powers, thanks to which the clashes become extremely easier.

We do not want to talk specifically about all the skills, because it is the only element of the progression of the character but to explain us better we will bring up two. Unlocked the ability to speed up their movements – including those related to platforming and actual attacks – defeating Wolfrick’s minions or cave goblins no longer presents any difficulty. If we add to this the enhancement of the weapon with the fire or lightning element, it becomes clear that Song of Iron would have needed types of enemies capable of more effectively countering the new powers of the protagonist. In short, if on the one hand it was nice to see the warrior transform into a force of nature, on the other the flatness of the clashes was beginning to weigh: luckily the brevity of the experience prevented the shadow of repetition from taking over.

Unfortunately, this flatness can also be found during the boss fight, which we unfortunately found lacking any creative flair. Excluding the final battle, which turned out to be more pleasant than the previous ones, the clashes with Rathgar, the Trolls and other more powerful enemies, did not manage to excite us in the least, nor to call us to adopt offensive solutions capable of involving heavy weapons or ingenuity.

Joys and sorrows of a wild land

Song of Iron is an exhausting journey, a man’s attempt to oppose a fate apparently already written in order to try to change it. Considerable is the distance that separates the warrior from the Great Temple of the Gods and there are numerous settings that he must cross before seeing the mythical snow-capped peaks that host him. During this journey in Unreal Engine we have been struck several times by the care and attention with which Joe Winter has built his world, either for the guessed choices related to the use of the color palette, or for the actual realization of the scenarios.

The “naturalness” of the waterways, the thick foliage of the trees moved by the wind and the faint lights of the fires that illuminate the dark caves of the goblins, are just some of the small beauties of Song of Iron that – while not shining for polygonal size of the characters – boasts a very respectable overall image quality. Eg, we were stunned when we came near the ruins of what in ancient times was a glorious city, because it is not for everyone to be able to imagine and build scenarios of this grandeur. Furthermore, we have only beautiful words to say towards the musical accompaniment, which with its Nordic sounds manages to accompany the fighter’s journey with great effectiveness. Precisely in relation to its itinerary, another component of moderate importance in the general economy of the gameplay is represented by the platforming phases. Again we had to deal with ua series of non-negligible edges, which in some cases have put a strain on our patience. Sometimes, for reasons unknown to us, the warrior did not climb on raised surfaces and in some cases – for problems related to collisions – he was thrown away even though he was not actually hit by the oscillating boulders. Given the aforementioned suboptimal responsiveness of the control system, moreover, the phases in which it is necessary to overcome several oscillating objects in rapid sequence could prove difficult for the wrong reasons and cause genuine frustration. 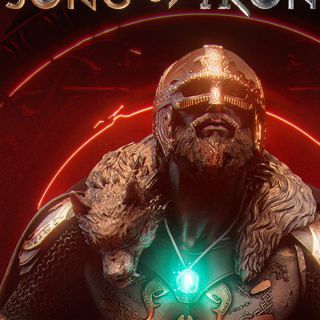 Song of IronXbox Series X Analyzed VersionMade in Unreal Engine by a single man, Song of Iron is a product that thrives on light and shadow, a certainly remarkable accomplishment that however failed to fully satisfy us on the playful front. Fans of adventures steeped in Norse mythology and out-of-the-box twists would do well to give it a chance – especially if at a discount – but those who expected a more complex and refined experience in terms of platforming and combat system would do well to weigh with attention to the critical issues of the game. Having said that, we hope that Joe Winter and his Resting Relic can follow up on Song of Iron and this time with some extra help, so as to fully exploit the potential of the ideas behind the progenitor.