Smart compact projector with power bank option in the test

Samsung’s “The Freestyle” projector looks like a small spotlight and also does a good job on the go. However, it is not suitable for all environments.

The small white projector is about the size of a ravioli can. It can be rotated 180 degrees on the spot holder and thus project onto the wall or ceiling. Particularly practical: The Freestyle automatically sharpens the image, corrects it if it is not frontally projected and also aligns it based on the surface contour. Only on a masked screen will you notice that the projected image is often slightly crooked. The structure is done in no time thanks to the auto-correction.

The projector connects to external sources via a micro HDMI socket. However, a suitable cable or an adapter for a few euros is not included in the scope of delivery and very few will have such a thing at home. Because the device is very light at 800 grams, a thick HDMI cable can pull the projector off the table.

The USB-C port on the Freestyle is for power only. This works via a USB charging adapter, which according to Samsung should deliver at least 20 volts / 60 watts; a power pack and cable were included with our device. Alternatively, you can connect power banks and operate the freestyle mobile. Samsung has given it the Tizen operating system and preinstalled common apps such as Netflix, Amazon Prime Video, Apple TV, Disney Plus, Magenta TV and Sky Ticket as well as the ARD and ZDF media libraries. With a stable WLAN connection, you can watch videos anywhere without additional players. 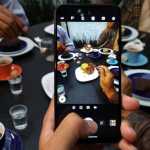 The Ryzen embedded CPUs get a big upgrade with the V3000 series. However, it...
Android

Xiaomi 12T arrives on October 4th with its 200 MegaPixels

Xiaomi prepares for the launch of the new 12T family and the latest news...