In early August of this year, Samsung introduced its new Odyssey G32 gamer monitor in Europe, with a series of advanced features for games and even in its design.

But how is the practical experience of using this equipment in your game and other uses? TechSmart has tried the product over the last few weeks and breaks it down for you in this full review.

The design follows the pattern of other recent Samsung models. The screen has ultra-thin bezels on three sides – top, left and right – with a larger one just below. There is only one button, located at the bottom, joystick style, to enter the menu and configure the monitor’s features.

The Odyssey G32 has a similar build to the one found on the Smart Monitor M8. The base is fitted to the support using a pin with a built-in key – both are made of metal –, and the screen is fitted using latches, which provide a lot of practicality and firmness, in addition to not requiring any additional tools.

Through this structure, it is possible to adjust the height and inclination, to leave it in the perfect direction for your taste. It also has the ability to rotate 90 degrees, to change the orientation from landscape to portrait if you prefer to use it vertically. However, the change in view is not automatic. You will also need to change the display settings in Windows.

In the connectivity part, in addition to the power port, we can find HDMI and DisplayPort connectors, for image input, and auxiliary, for sound output. It is important to note that the G32 does not have built-in speakers – a negative point, as it will require an external device to hear any sound. 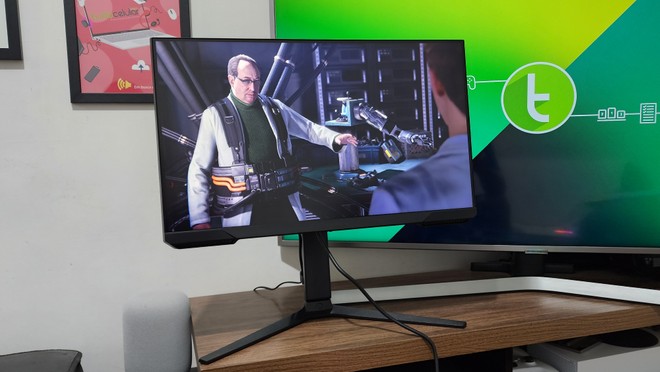 We tested the monitor variant in the 24-inch size, but there is also a 27-inch option on the market. Anyway, we have a Full HD resolution here, which suits many types of games well, but it is limited when we think that several current games were made with native 4K support.

This is a VA type panel. It doesn’t disappoint in colors and contrast, despite the fact that the default calibration – “Personal” – doesn’t deliver the most vibrant modality of tonalities. We recommend the “FPS” option, which makes the image more balanced, without much saturation.

Despite the technology used, the viewing angle is pleasant. There is little distortion when viewing more from the side, even if it does not reach the quality of an IPS, for example. The brightness is also below the desired even at the maximum level. Undemanding players shouldn’t be bothered, but those who don’t give up good visibility will certainly miss it.

The VA helps to reach the 1ms response time, which makes the difference during gameplay. Another feature present here that gamers like is the 165 Hz refresh rate. This consists of an evolution of the previous generation, which reached 144 Hz. The fluidity gain and low latency make a lot of difference in games like CS:GOfor example.

We noticed a greater ease in reaching targets faster through this ability. Even in the frantic experience of DOOM Eternalthe low delay allows you to survive longer by making it more agile to dodge monster attacks. 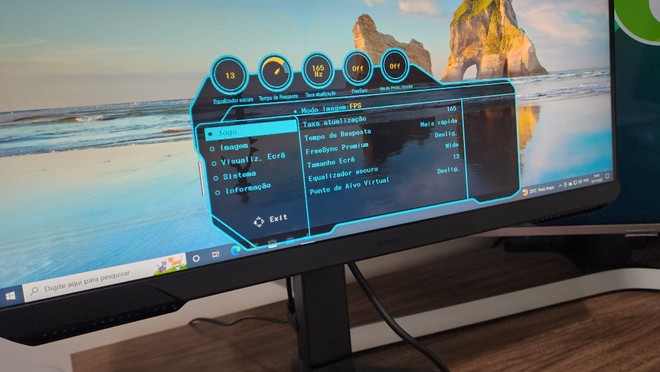 The Odyssey G32 brings some additional features to the user. One of them consists of AMD FreeSync Premium, which helps with the mandatory low frame rate compensation, in addition to the other technologies to make the game run smoothly and without jitter. However, G-SYNC was left out for machines equipped with NVIDIA hardware.

We’ve seen this technology make the difference even in titles that aren’t very famous for being heavy, like the new PC version of Sackboy: A Great Adventure🇧🇷 Some instabilities in cutscenes start of phase are mitigated with the tool.

Another existing feature here is the Eye Saver Mode, which reduces blue light to give greater comfort to the eyes. To top it all off, there’s Flicker FreePlay, which helps you focus more on the game by taking away any distracting flicker. He is good for games that demand more attention in movements. 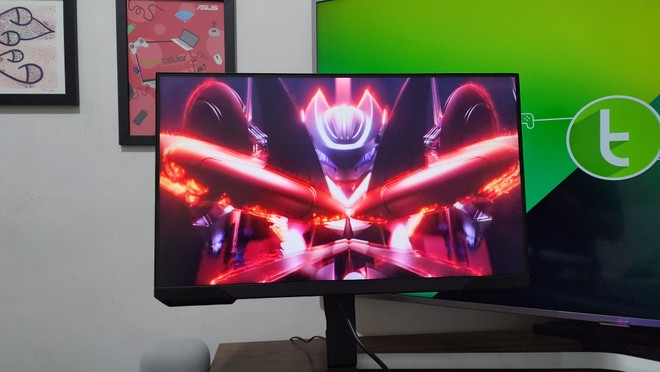 The Odyssey G32 offers a well-rounded set of technologies in a size that is affordable for any environment. The design pleases with its robust construction and very practical assembly, without the need for screws and other tools.

The possibility of rotating, tilting and adjusting the height allows you to find the ideal position for its use. Also, the inputs are enough for you to connect different PCs. The presence of built-in speakers is missing, to dispense with the obligation to connect an external device for sound output.

In the image part, the balance is satisfactory. Despite the type of panel and the less-than-pleasant brightness, the colors do not disappoint and the features designed for games – such as the high refresh rate and low latency – guarantee a fluid game with a fast response time.

In the extras, we highlight the presence of FreeSync Premium, an AMD feature that is increasingly present and necessary in gamer equipment to improve the smoothness of images.

It is worth it?

We recommend it for those who have AMD hardware and want a high update frequency. If you have an NVIDIA set, a similar option is the ASUS VG248QG. It’s available for about the same price, only it supports G-SYNC. Here there is also a 24-inch screen and 165 Hz rate, but the panel is TN.

If you want one with FreeSync that brings more cost-effectiveness, an alternative can be the AOC G2 Hero. In addition to AMD technology and the 24-inch display, the latency of 1 ms is present in this. However, the low is for the refresh rate, which reaches 144 Hz.

So, did you like Samsung’s gamer monitor? What were your impressions of him? Tell us!