Samsung is the company that has made the strongest commitment to the world of foldables since it introduced the Galaxy Fold in 2019. Today, the company has presented its most advanced foldable, Galazy Z Fold4, which brings some incremental improvements over its predecessor. Everything that Samsung has presented in Unpacked 2022:

Improved design with better use of space

The Samsung Galaxy Z Fold4 offers a sleek and sophisticated design, which is available in three colors: Phantom Black, Graygreen and Beige. At the same time, it is a tough design, as both the outer screen and the surface glass are protected by Gorilla Glass Victus+. Samsung has improved the durability of the main display panel with an optimized layer structure, which helps reduce damage from external shocks. The phone has IPX8 resistance, which means that it can withstand up to 30 minutes submerged at 1.5 meters, although Samsung does not recommend putting it in the pool or taking it to the beach. The Galaxy Z Fold4 now offers an outer screen with a slightly wider aspect ratio to improve the user experience, since until now it had a quite elongated ratio. 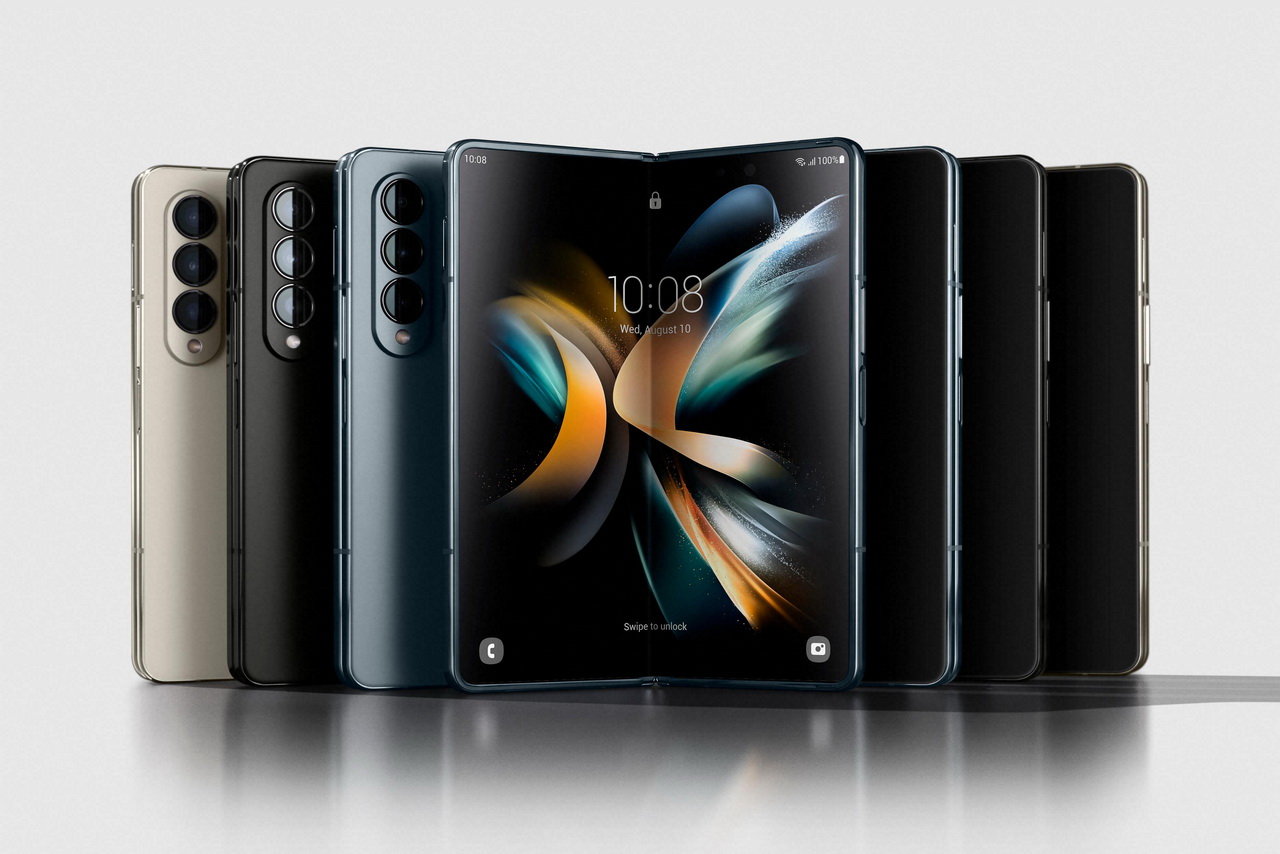 The outer screen is 2.7 mm wider, while the overall width of the phone has not increased, thanks to the reduction of the bezels and the size of the hinge. The overall height of the phone (not the screen) has been reduced by 3.1mm. As for the weight, it has decreased by 8 grams to 263 grams. When unfolding the Galaxy Z Fold4, we find a 7.6″ screen with narrower frames and a ratio that, again, is also wider, since the screen itself is 3mm wider. The camera under the screen has also been improved with a new arrangement of pixels on the camera lens that makes it more invisible. What we do not know is whether this new layout also improves image quality, which in this type of screen always suffers from less light capture. The screen offers an adaptive refresh rate of 120 Hz to optimize power consumption and a maximum brightness of 1,000 nits for good visibility even in the sun. 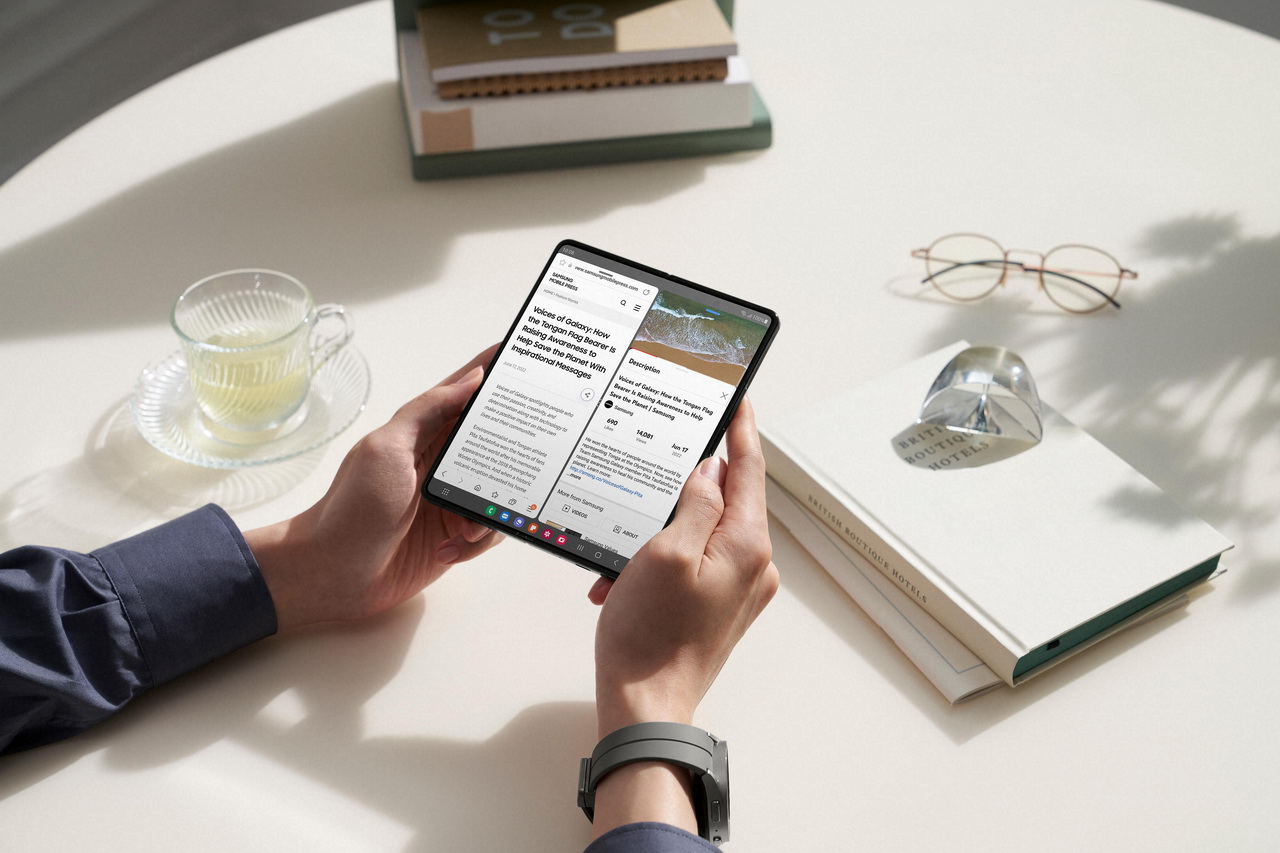 Getting more out of the folding screen

The Flex Mode functionality, already present in previous models, allows you to comfortably consume content without having to hold the phone, simply by placing it on a table and unfolding it in an “L” shape. This mode is optimized for popular apps like YouTube, Netflix Disney+, Microsoft Teams or Google Meet, allowing, for example, to watch videos on YouTube or play games while making a video call with the new Google Meet app. For apps that aren’t optimized for Flex Mode, Samsung provides a Flex Mode Panel that displays content on the top half (the vertical part of the screen) and a Flex Mode TouchPad on the bottom half (the vertical part). which is horizontal). Samsung continues to work with developers to ensure Z Fold4 users get a good experience that takes advantage of its big screen. For example, Samsung has collaborated with Microsoft to ensure that Outlook, Office, and Teams provide tablet-like functionality. 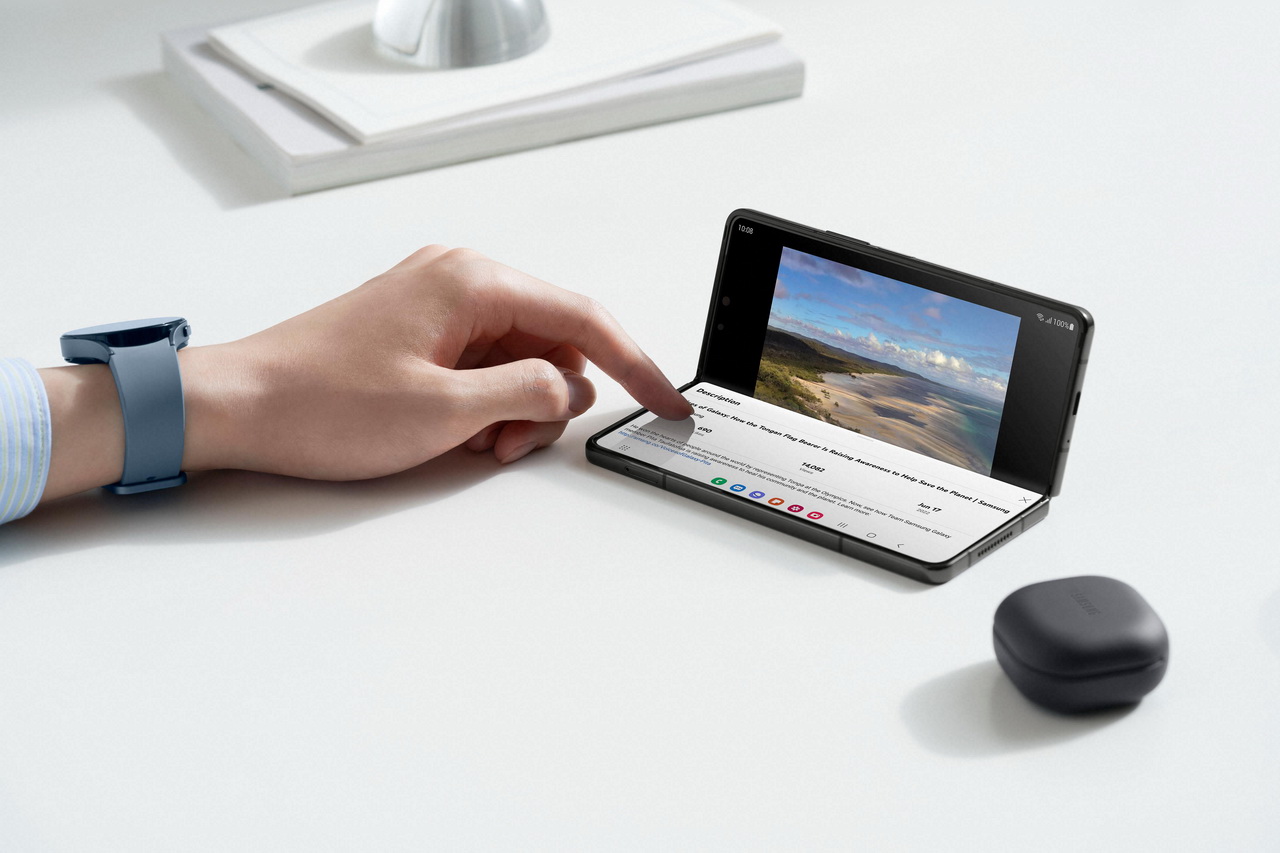 Facebook has also been optimized for the 7.6-inch screen, offering the full timeline and menu on one screen. You can also use Facebook and Facebook Messenger side by side thanks to Multi Window, or start a video call on WhatsApp using Flex Mode to chat hands-free while having access to the most important settings. The Galaxy Z Fold4 is the first smartphone to ship with the Android 12L operating system pre-installed, a special version of Android created by Google to make the most of experiences on large screens, including foldable screens. Samsung has incorporated a new taskbar with a design similar to that of a PC, providing access to your favorite and recent apps. You can even set favorite app combos on the taskbar to launch up to three apps at once in multi-window mode. Multitasking is also more intuitive thanks to new swipe gestures. You can instantly switch open apps in full screen mode to popups, or split the screen in two for more multitasking options 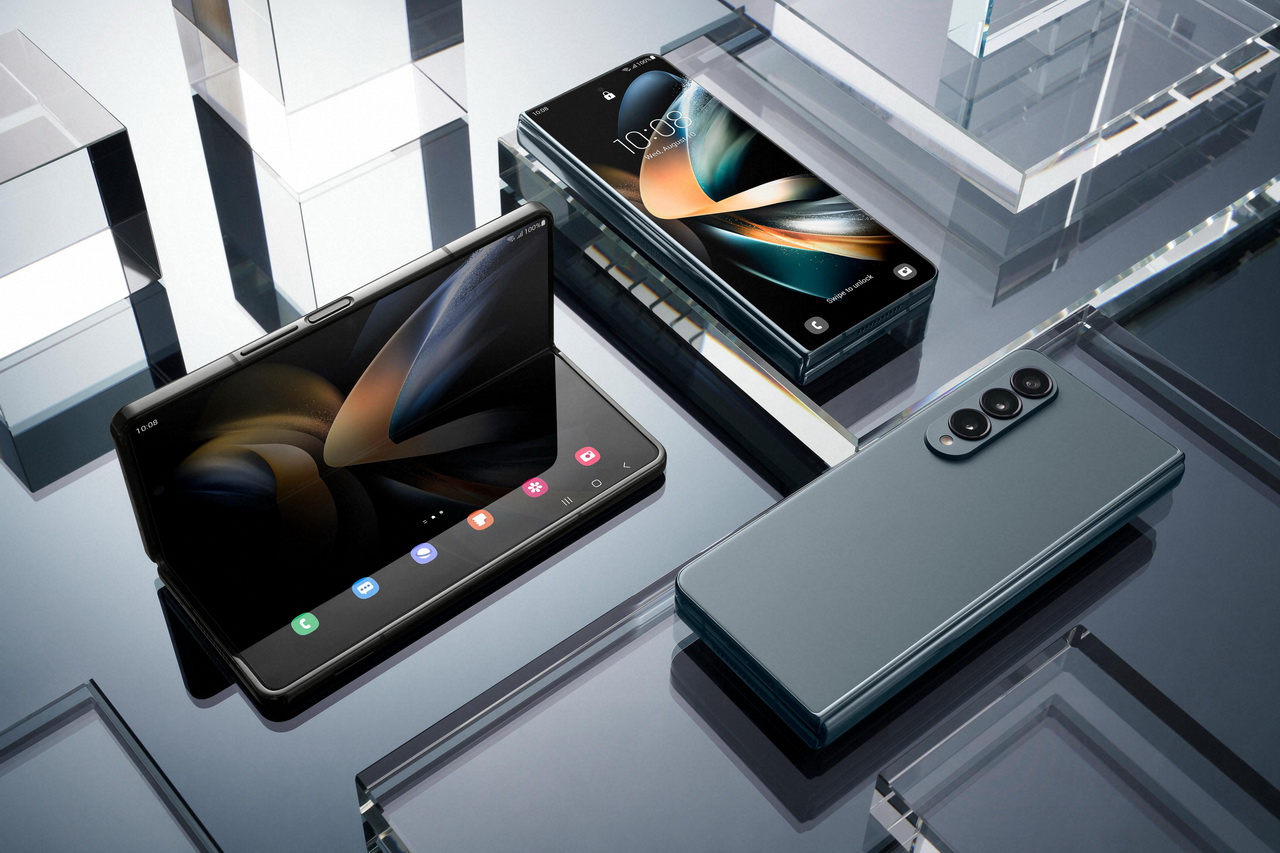 Samsung Galaxy Z Fold4 is the only foldable on the market that allows the use of a pointer like S Pen. There are two variants of the S Pen: S Pen Fold Edition (132mm, Φ7.7, 8g), compatible only with Fold3 and Fold4, which features a retractable tip that protects the Fold’s UTG screen, and S Pen Pro (174mm , Φ9.5, 14g), compatible with other Galaxy devices and with Bluetooth support. Samsung has not included a compartment in the phone itself to store the S Pen, but it does market a new case where it can be stored. 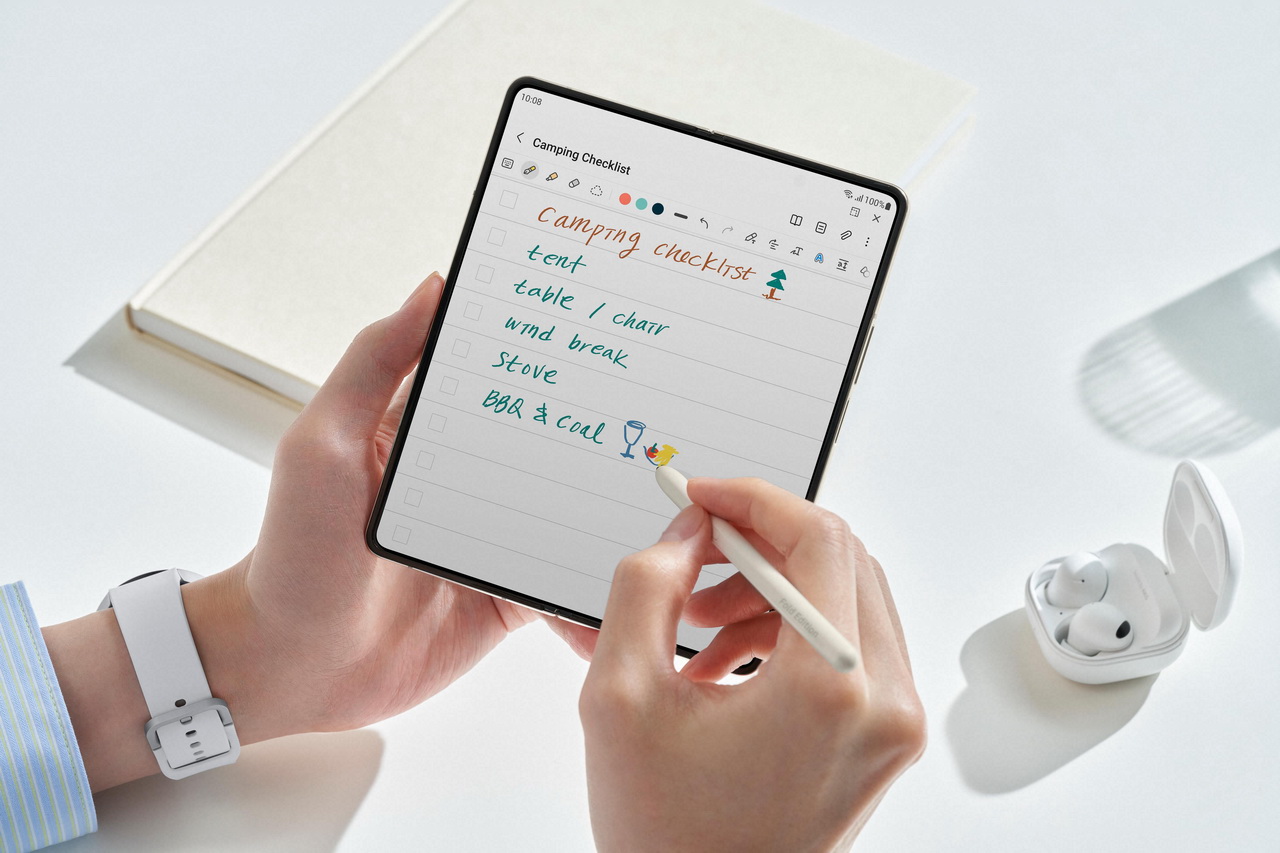 This year, Samsung has added a new text extraction feature, which uses the S Pen to select information from an app (for example, an address within your contacts) and allows you to quickly drag it to Google Maps to get directions. This feature uses AI to extract information from images and allows you to scan dates, times, addresses, phone numbers, email addresses, and URLs. 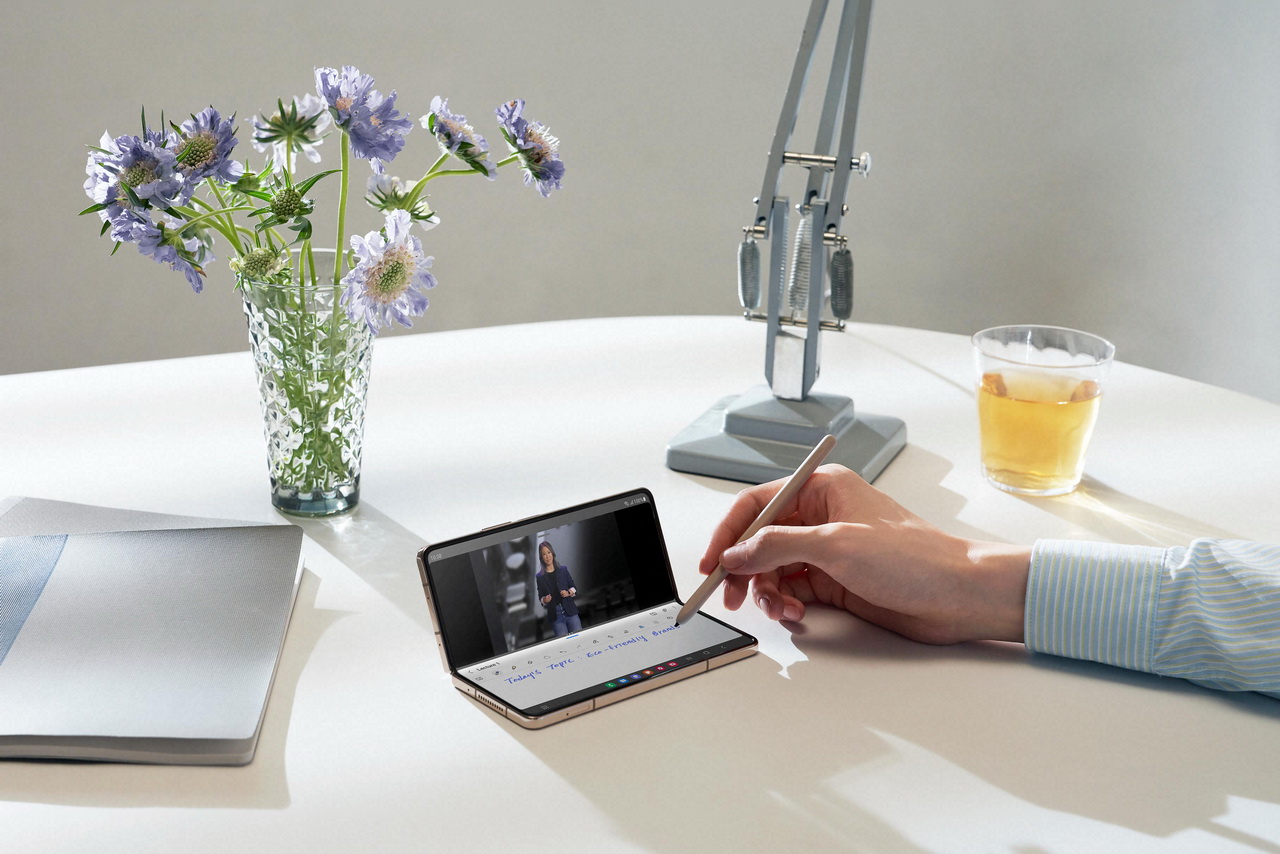 Samsung has carried over camera innovations from the Galaxy S series to the foldable form factor. The Samsung Galaxy Z Fold4 has three cameras on the back. It incorporates a 10MP telephoto camera with 3x optical zoom and 30x space zoom, a 12MP ultra-wide camera, and a 50MP wide-angle camera. The wide-angle camera offers improved resolution, four times that of the Z Fold3, and produces 23% brighter images in dark environments thanks to a larger sensor that captures more light. 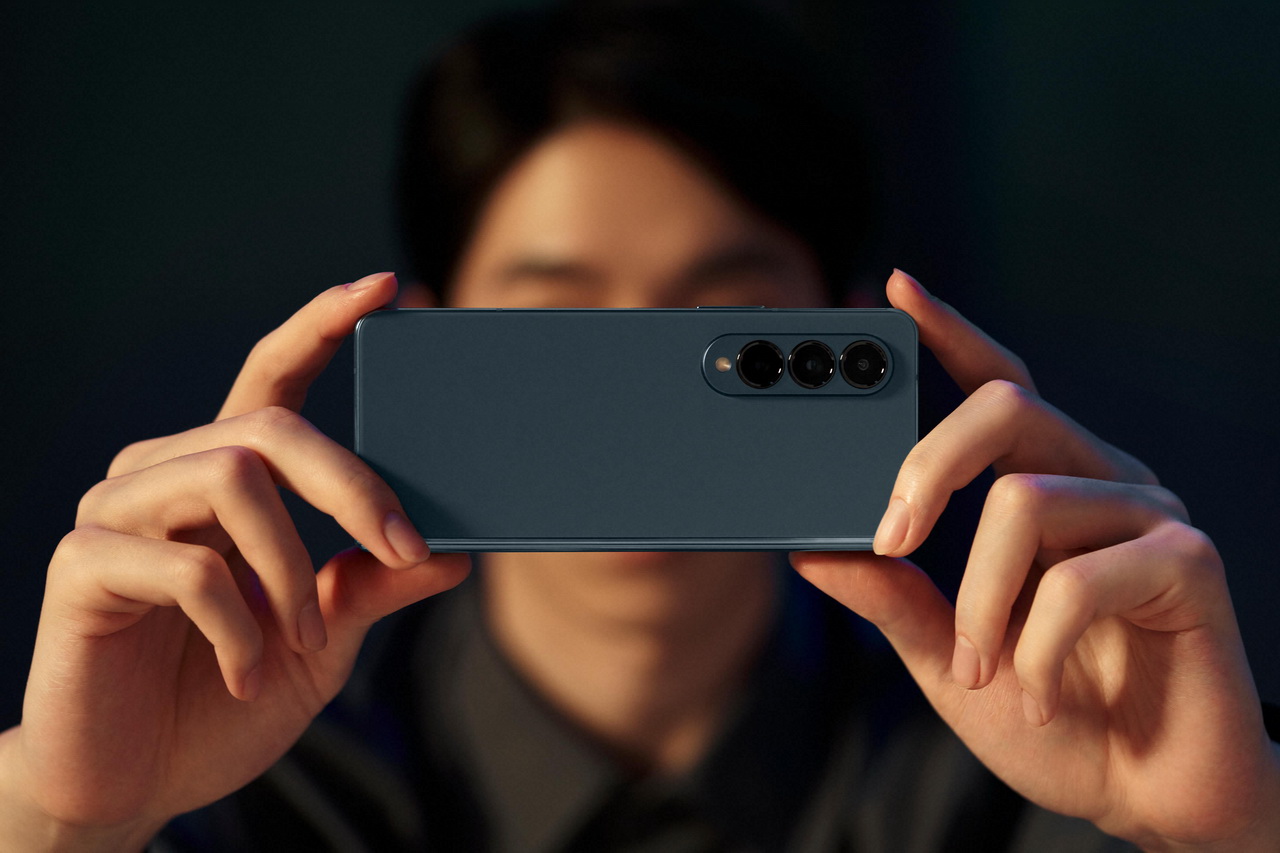 The Samsung Galaxy Z Fold4 offers unique camera experiences, such as hands-free shooting thanks to Flex Mode. It also allows you to take pictures with zoom without losing sight of the full image, which is displayed to the side, so you can orient yourself on where you are aiming. Dual Preview allows both you and the person you are photographing to see the image before you capture it. It is also possible to take high-quality selfies using the rear camera. 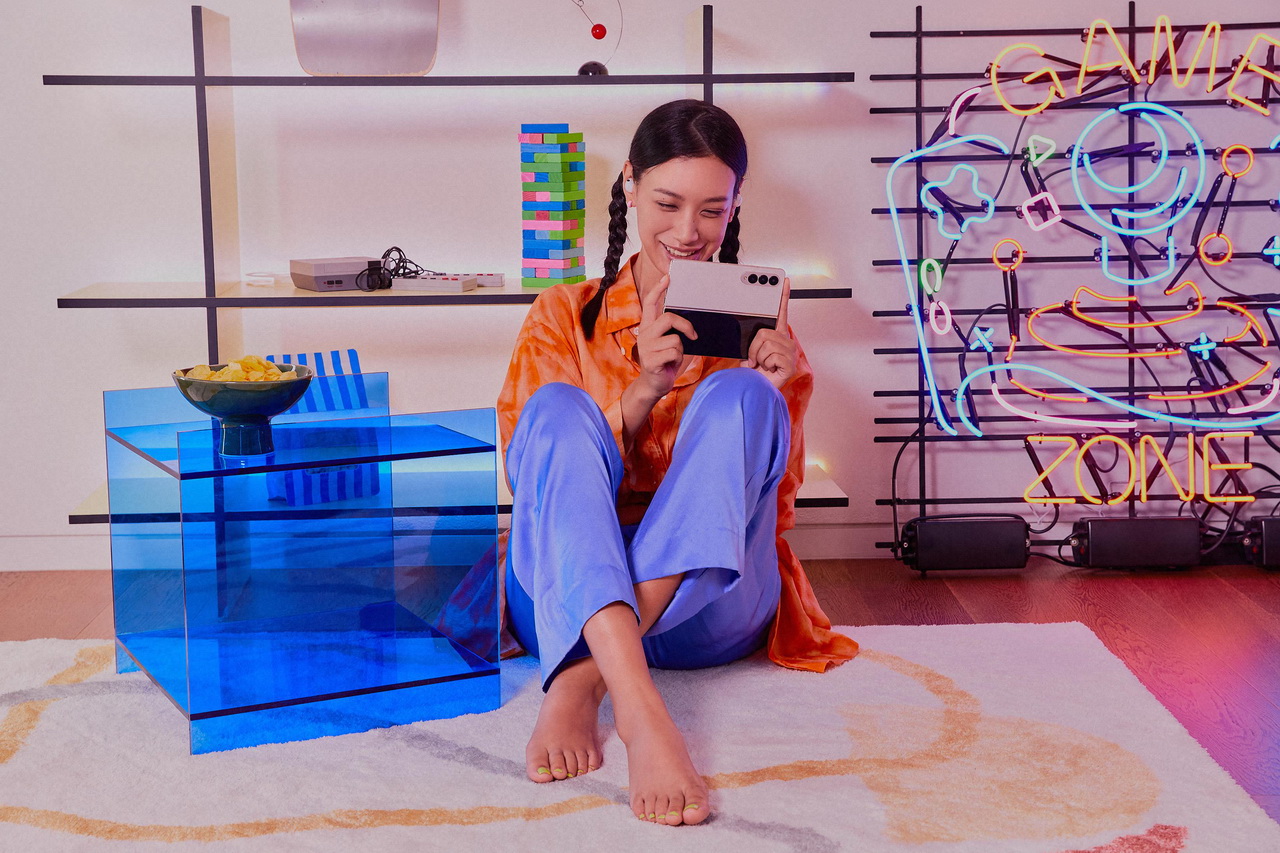 The Samsung Galaxy Z Fold4 arrives with the most powerful chip, Qualcomm Snapdragon 8+ Gen1, manufactured in a 4nm process. The phone has a 4,400 mAh battery with Super Fast Charging at 25W (50% charge in 3 minutes) and Fast Wireless Charging 2.0 wireless charging. 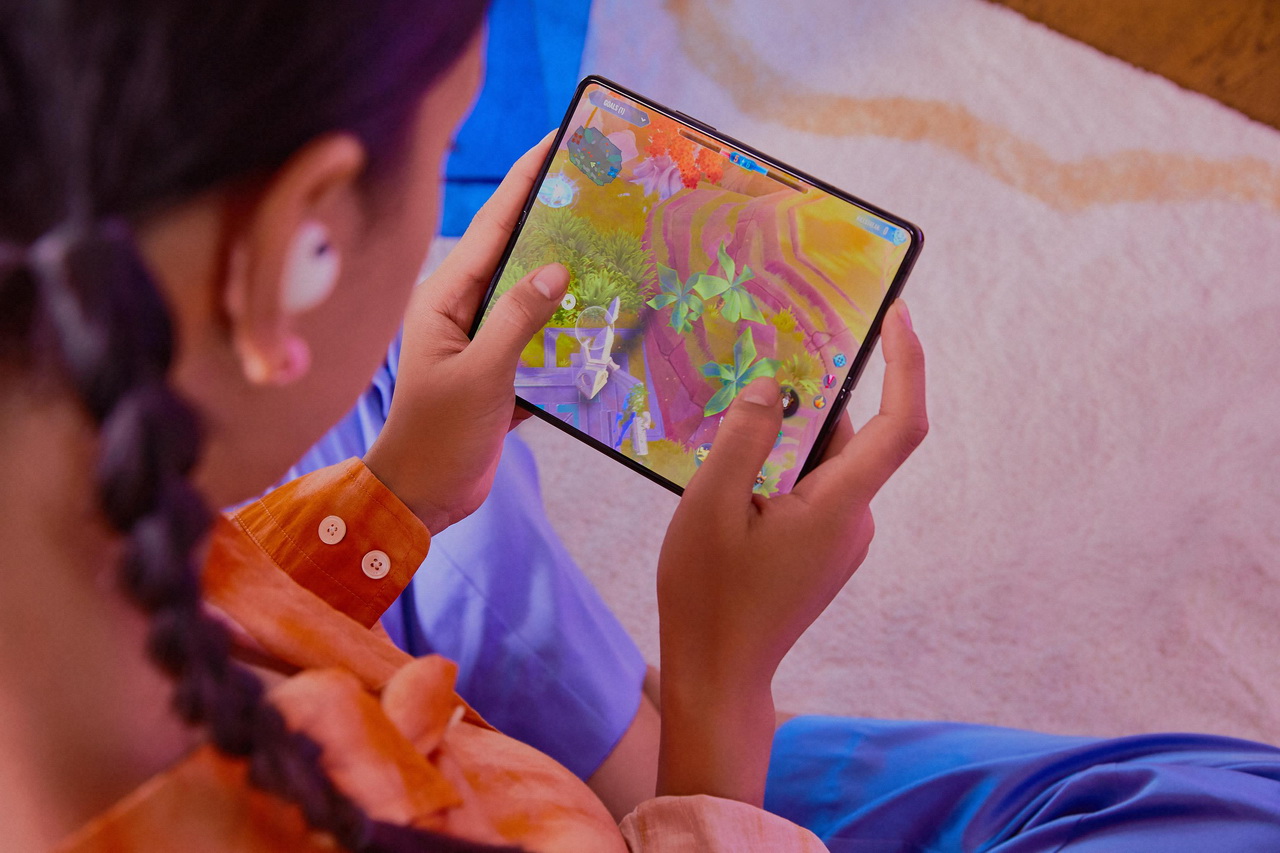 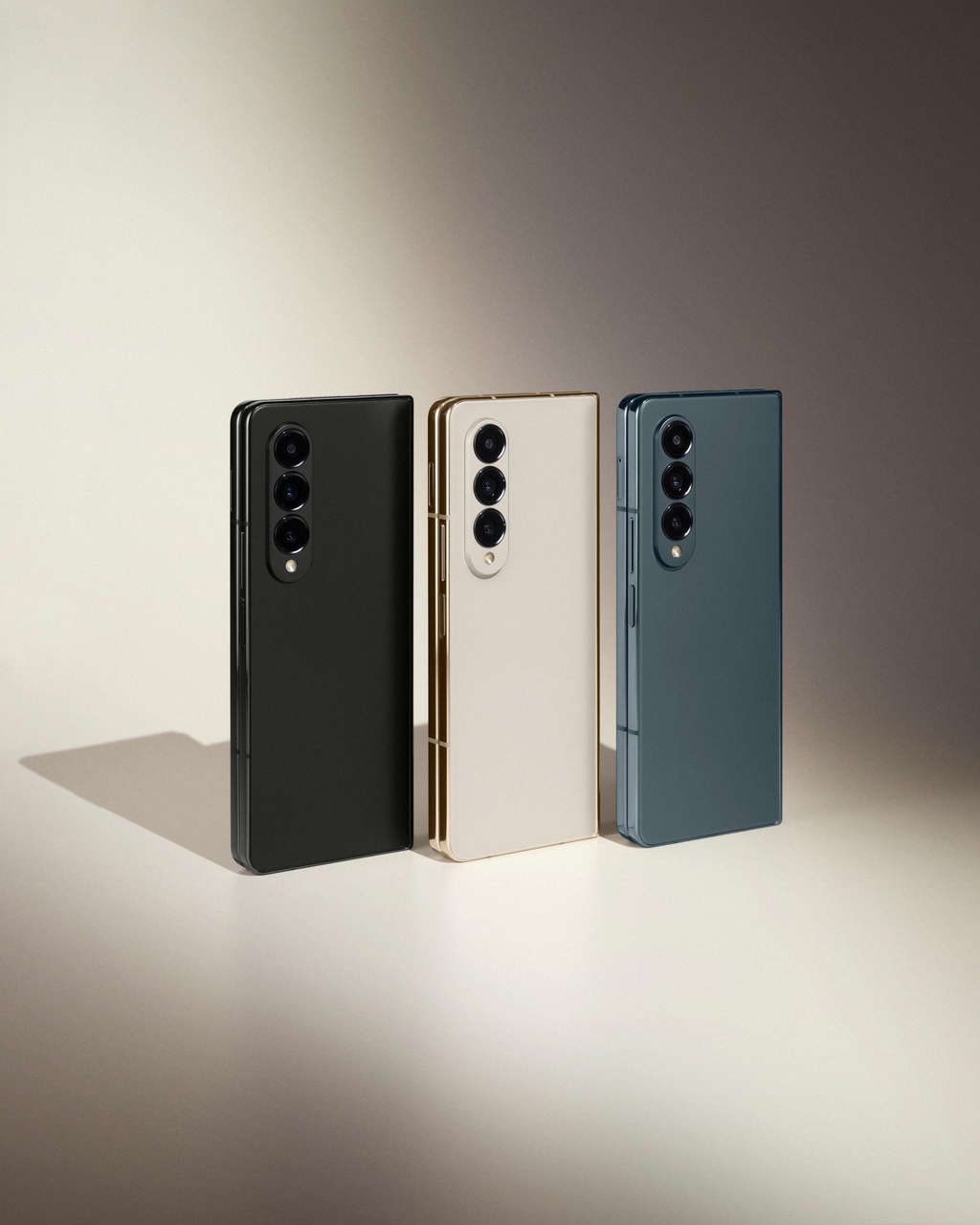 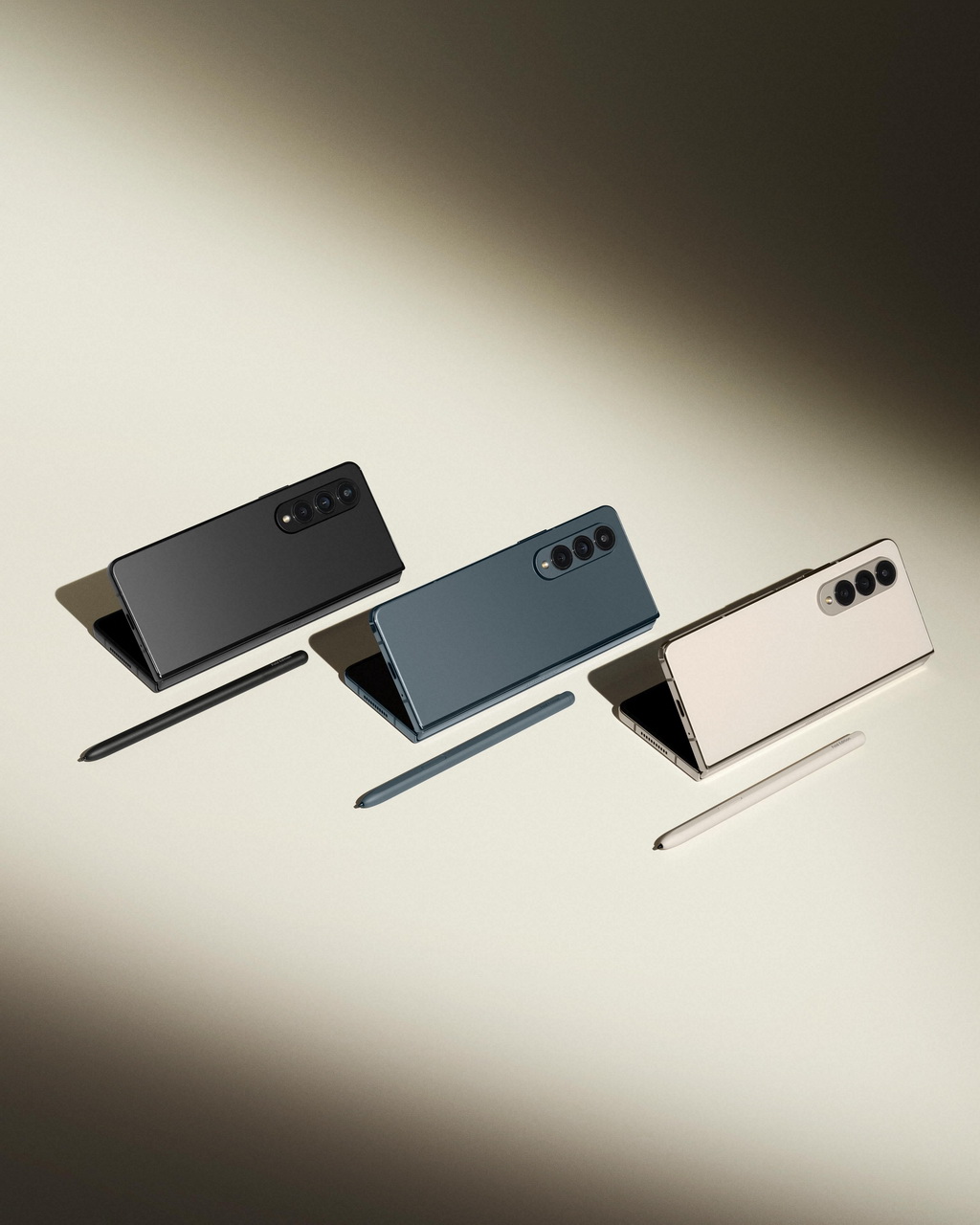 Customers who reserve a Galaxy Z Fold4 will receive one year of free subscription to Samsung Care+, which offers protection against drops and screen cracks with the support of Samsung experts in 51 countries. Samsung has not yet revealed the prices of the Samsung Galaxy Z Fold4.

Xiaomithe Chinese technology company, is working on the next arrival of its new...
Tech News

The new feature of Netflix Premium can blow your mind… Literally!

Netflix is ​​one of the most popular streaming platforms in the world, and...