Last month, a new device in Samsung’s Galaxy F line was certified by the Indian body BIS. This time, the Galaxy F04s has appeared in the Wi-Fi Alliance database and also on Geekbench.

The Samsung Galaxy F04s will be an entry-level Android phone and will focus on cost-effectiveness. It has numbering SM-E045F/DSAs and the listings reveal key specs like its chipset and memory configuration, as well as connectivity options.

Under the hood, the entry-level phone will come equipped with the Helio P35 chipset (MT6765V/CB) with the integrated PowerVR Rogue GE8320 GPU. It will have 3 GB of RAM and features the Android 12 operating system, even with 13 already released. Probably, it should bring the One UI 4.1 Core interface.

Rumors indicate that the Galaxy F04s will be a renamed version of the Galaxy M04, but Samsung has not confirmed the information. If this is true, it will come with a dual camera module with an LED flash and the screen will come with a drop-shaped notch to house the front sensor.

In memory options, it should be launched with 3GB or 4GB of RAM and 128GB of internal storage, in addition to support for expansion up to 1TB with space for a microSD card.

For power, it should pack a 5,000mAh battery unit with 15W fast charging support.

Weeks after the first details of the Galaxy F04s were leaked, now more evidence suggests that the new economic option of the South Korean giant may soon hit the market. At least, to India, as Samsung’s cell phone was seen in the BIS certification, the country’s standards office.

the listing points to a model number SM-E045F/DS and suggests the proximity of the launch of the device, despite not revealing any new specifications. 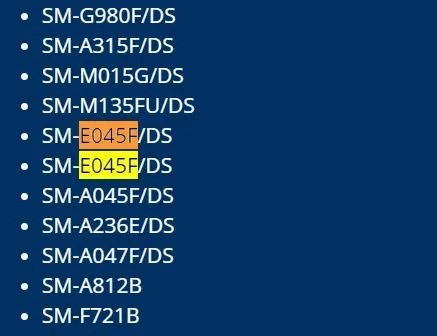 The cell phone was recently found in the Wi-Fi Alliance database, showing that the F04s will support 2.4 GHz single-band Wi-Fi, in addition to pointing out that the device will run with Android 12 from the factory, probably with the One UI 4.1 Core interface.

The expectations, in fact, is that this is just a renamed model of the Galaxy A04s – which, in this case, would point to a phone with a 6.5-inch IPS LCD screen with HD + resolution, 90 Hz refresh rate, in addition to the Exynos 850 platform.

Other features present in the A04s are 4 GB of RAM and 64 GB of internal storage that can be expanded to up to 1 TB via microSD card, in addition to a 50MP main camera along with two 2MP sensors for depth detection and macro photography.

The front camera is 5MP and the 5000mAh battery supports 15W fast charging.

Galaxy F04s appears in leak and has first details revealed

In addition to working with a series of high-end smartphones, Samsung also plans to launch a new entry-level smartphone soon. This time we are talking about the Galaxy F04s.

The novelty was revealed by Pricebaba staff, and it is available in a certification published by the Wi-Fi Alliance this Wednesday morning.

According to the regulatory agency, the smartphone bears the number SM-E045F/DS, supports Wi-Fi networks at 2.4 GHz, 4G, in addition to Bluetooth 5.0 and native Android 12. 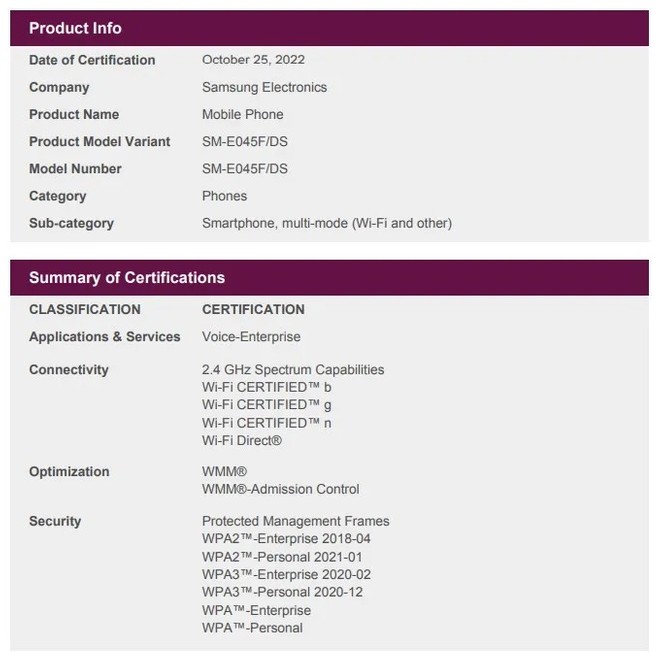 For now, the rest of the specifications of the Galaxy F04s still remain a secret, but it should be noted in the history of the Galaxy F line that these devices are usually just renamed devices.

Therefore, just as the Galaxy F02s was just the renamed A02s, most likely the Galaxy F04s is the A04s. Thus, the technical sheet of this device can count on a 6.5-inch HD+ screen that has a rate of 90 Hz.

O processor can be Exynos 850, and it works in conjunction with 4 GB of RAM and there is also a 50 MP main camera. Finally, the battery tends to be 5,000 mAh with support for 15W fast charging.

So far, Samsung has not commented on when the Galaxy F04s will be announced, but that could change at any time.

What did you think of the first specifications of this device? Tell us your opinion here in the comments.