AMD is one of the computer hardware developers that seeks to serve the gamer public in a series of components. We particularly highlight performance in processors and graphics cards.

To learn a little more about how these chips work in games in practice, TechSmart tested a PC gamer equipped with a Ryzen 5000 CPU and Radeon RX 6000 GPU in advanced models in recent weeks. We tell you a little about it in this video.

This computer’s main highlights are the presence of the Ryzen 7 5800X3D processor and the Gigabyte Radeon RX 6800 graphics card. In addition to the Zen 3 architecture, the CPU features 3D V-cache technology to increase cache level three and achieve superior performance. In practice, the processor stacks the 3D cache to increase performance without increasing TDP.

The GPU, on the other hand, is focused on players who want to enjoy games in high resolution and comes with a total of 16 GB of GDDR6 VRAM memory. Here we still have the Infinity Cache technology and the RDNA2 architecture, the same present in the PlayStation 5 and Xbox Series X consoles. 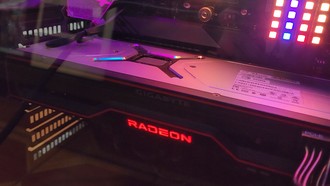 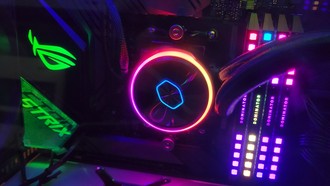 Both components are produced in TSMC’s 7-nanometer lithography, which ensures a focus on high performance and energy efficiency.

This machine has a Cooler Master H500P case, which allows for two 200mm fans each at the front, plus one 140mm one at the rear, in addition to slots on the top. The top panel has ports for two USBs 3.2 and two USBs 2.0, in addition to the audio and microphone jack.

Inside, we find an ASUS ROG Strix motherboard, in addition to 64 GB of Corsair Dominator RAM, divided into four sticks. All properly illuminated with RGB LEDs.

We tested it on a Samsung Odyssey G32 monitor, to take advantage of the 165 Hz refresh rate present on it, at a maximum Full HD resolution, more recommended to exploit the cache increase to the fullest. 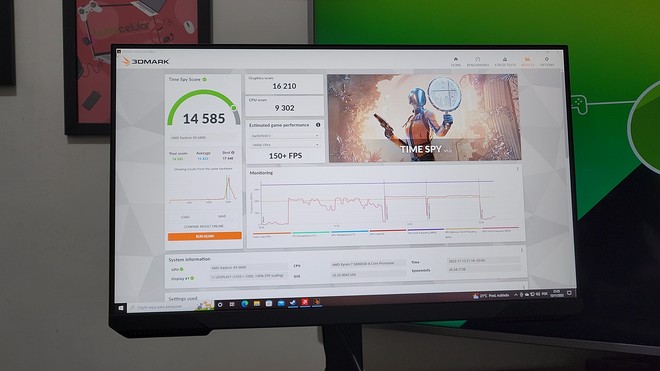 Before talking specifically about games, let’s address benchmark tests, to find out what the strengths of a machine of this size are. First on 3DMark, we could see a score that went over 14,500 points and was close to the top of the indicator.

It’s clear how the RX 6800 GPU boosted this result and provides enough performance for high-end gaming, even if you’re using a monitor with Quad HD or even 4K resolution. But remembering what we said earlier about the ideal being Full HD, due to the characteristics of the processor. 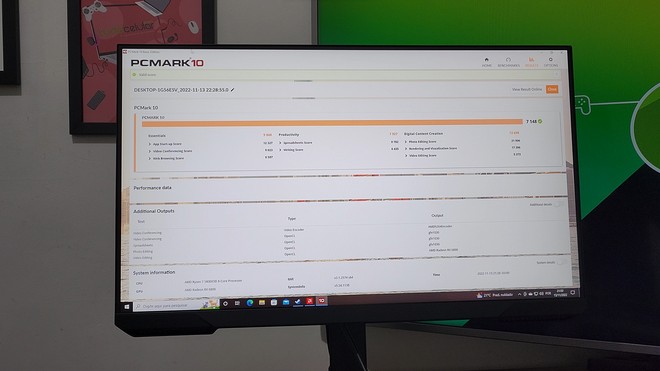 Moving on to PCMark 10, we see how the combination of GPU and CPU is a booster for those looking to use it in content creation as well. The editing part in general allowed a high score that practically reached the top of the ranking, with a total score of more than 7,100 points.

On the other hand, the presence of 3D V-cache results in performance impacts in CPU-bound applications. So much so that their performance here ended up being the worst category in the benchmark. 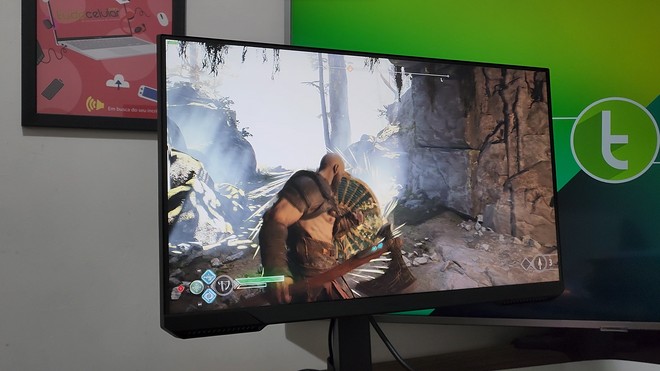 Now, let’s talk about what matters most: practical gaming performance. We tested it on a number of options from different genres to understand how this hardware performs in titles.

Starting with God of War, here we highlight the graphic power of taking advantage of resources such as Ray Tracing in the game, which greatly improves the game’s scenarios, especially in the areas where we can most notice a contrast between light and shadow. The adventure of Kratos and Atreus can be played at an average of approximately 140 fps on this set, in Full HD resolution. 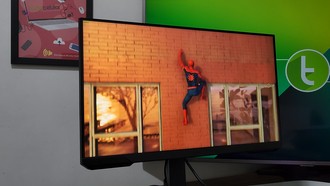 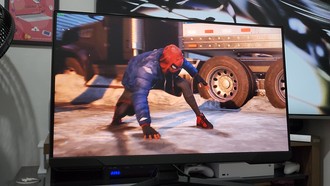 But the technology that gives greater realism can be harnessed more beautifully in Marvel’s Spider-Man: Remastered and Miles Morales. In the two versions of titles originating from the PlayStation for the PC, Ray Tracing is fully used in scenarios that are more conducive to noticing the graphical improvements.

We have the feature applied to both shadows and reflections here, without affecting the frame rate per second, which is capable of reaching the maximum supported 165 fps without major problems.

Moving on to DOOM Eternal, what impresses here is the quality in the contrasts of light and shadow and also the high fluidity, which allows you to move freely in the frantic pace provided by the game.

We continue in the first-person shooter style, now in the most competitive scenario of CS:GO. This is a game that doesn’t require so much hardware to run, but it does demand a good set to offer the necessary amount of frames per second to perform better.

And at this point, we had no problems here. It is possible to reach very high fps rates and have a very smooth experience, so as not to suffer any problems during your game. 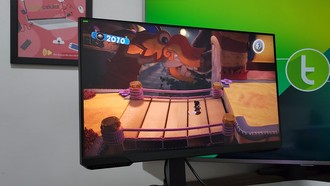 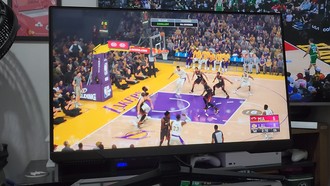 Even in less sophisticated titles, like Sackboy: Uma Grande Aventura, this hardware offers improved textures to make the game more beautiful, despite the simplicity of the movements and the limitation of the fps rate.

On the other hand, we tested NBA 2K21 with a history of problems running on other machines with advanced hardware. But here, we do not suffer any difficulty. The game ran with great fluidity, high quality graphics and activated extras. 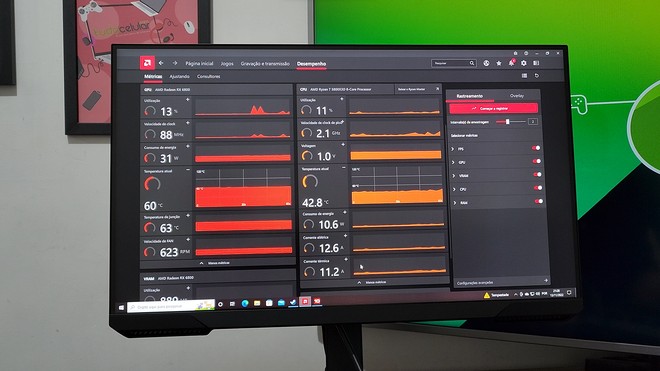 We also need to highlight the proper functioning of the coolers to keep these components cool. Even after being well demanded, the processor was just above 40 degrees, while the GPU remained at about 60 degrees. 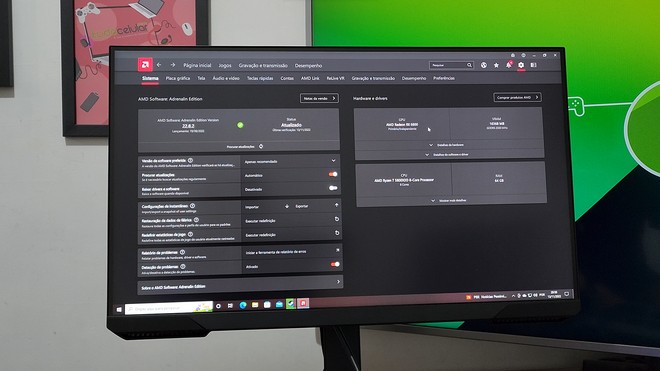 Behind powerful hardware, it is also important to have complete software to manage the components. And here it doesn’t work any different. We are talking about AMD Radeon Adrenalin.

With the program, you are not limited to just checking for any available updates. It goes further and shows various details about processor and video card performance. 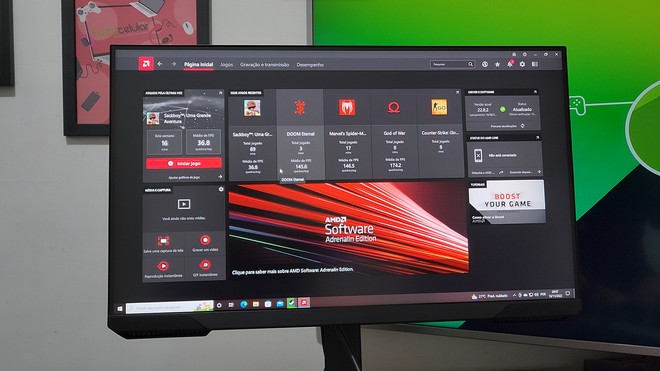 It is possible to check the temperature, clock speed of components, power consumption and which profiles they are selected, in addition to controlling how you want the components RGB LEDs. You can individually check the average performance of the GPU in each game, to understand how much the title requires graphic power.

Another possibility is the famous overclocking. You can increase the GPU clock frequency to further enhance the satisfactory results in games. But also be prepared to boost the fans, if you want to curb the additional heat generated with the speed gain. 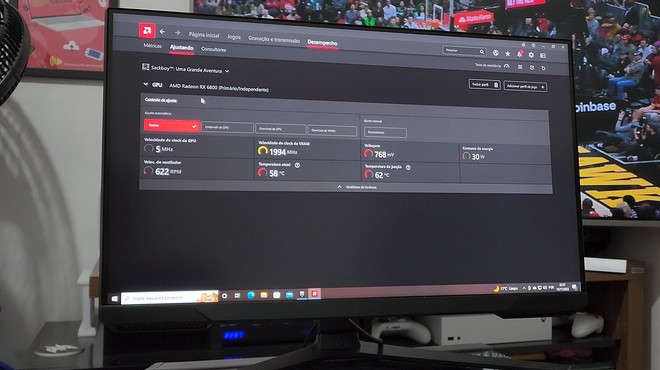 In this case, the CPU does not allow clock boost due to cache characteristics. This is a way that AMD has found to make sure that the TDP does not exceed 105W. But this probably won’t impact your gameplay that much. 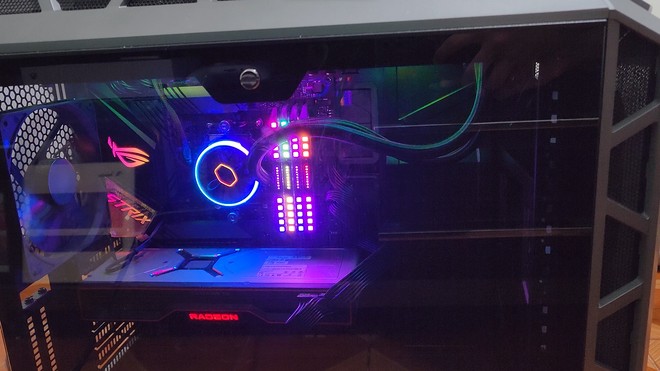 Here we see a combination of processor and video card in the most advanced segment, in a machine that doesn’t leave anything to be desired in any part of its technical specifications.

We found that the Ryzen 7 5800X3D works well together with the Radeon RX 6800. The presence of an integrated AMD CPU and GPU ecosystem favors performance and management together within the same software.

In games running in Full HD, we had no problem. All titles ran with high fluidity and maximum graphic quality, without any kind of suffering. We highlight the beauty in the graphics of titles like God of War and Marvel’s Spider-Man for PC, which manage to take full advantage of Ray Tracing technology.

We also highlight the possibility of having high fps rates in games that make a lot of difference, such as CS:GO and DOOM Eternal. We also reinforce the possibility of improving the experience in simpler games, such as Sackboy, or even running some problematic and quite demanding ones, as is the case of NBA 2K21.

To assemble a PC with these same parts and case, we estimate something around R$ 12,000, mainly due to the price of the Corsair Dominator memory sticks, the CPU and the GPU. If you prefer to cut the amount of RAM in half, you can get closer to R$ 10,000 the amount to be disbursed.

We understand that this is a computer for game fanatics, who want high fluidity in any situation, support for new technologies, but don’t mind playing in 4K resolution or demanding the same performance in demanding tasks outside the world of games.

If you want an NVIDIA alternative for GPU without losing performance, an option is the RTX 3090 Ti. You will have very high performance, but you will not have the integration of the ecosystem for joint management.

If you prefer an Intel processor instead, a similar model could be the Core i9-12900K. It will offer greater raw performance without the limitations of 3D caching, while also not having the gains that the feature provides in the gaming area.

What did you think of the Ryzen 7 5800X3D and Radeon RX 6800 performance? Would you have a computer with these settings in your house? Feel free to talk to us in the space below.