TechSmartAerezona Developers
HomeTech NewsRealme 10 has design revealed by certification after passing through Geekbench with...

realme is expected to launch the realme 10 mobile in the coming months. The device with model code RMX3630 passed through several certification sites such as NBTC, EEE and CQC in recent days, as well as appearing in the Geekbench database.

A new FCC certification revealed the realme 10’s rear design and confirmed some of its specs.

The FCC listing revealed that the realme 10 should come with a dual rear camera module and LED flash. The device’s camera arrangements are very similar to the realme c33.

In addition to the design reveal, the certification reinforced that the realme 10 will come with a battery unit with a typical capacity of 5,000 mAh, but registered with 4880 mAh, in addition to having a charger model VCB3HDUH with support for 33W fast charging.

The latest certification also suggests that the realme 10 will come standard with Realme UI 3.0 based on the Android 11 operating system. Recently, the phone went through the Geekbench benchmark database and confirmed that its chipset will be MediaTek’s Helio G99 with 8 GB of RAM accompanied by the Mali G57 GPU.

In the specifications, it is possible that it inherits some of the realme 9 4G, launched in the second quarter of this year. It has a 6.4-inch AMOLED screen with FullHD+ resolution, 90 Hz refresh rate, triple rear module with 108-megapixel main sensor and 16-megapixel front sensor.

The realme 10 should be the newest bet by the Chinese manufacturer in the entry market and the smartphone passed through the Geekbench platform this Tuesday.

With RMX3630 numbering, the device Has MediaTek Helio G99 processor to ensure only 4G connection. In addition, the chipset works with 8 GB of RAM and native Android 12.

As this is the most powerful variant, we can also expect versions with 4GB and 6GB of RAM to lower costs in markets like India.

As a result, the set managed to score 483 points in the single-core test and 1668 in the multi-core test. Check the sheet below: 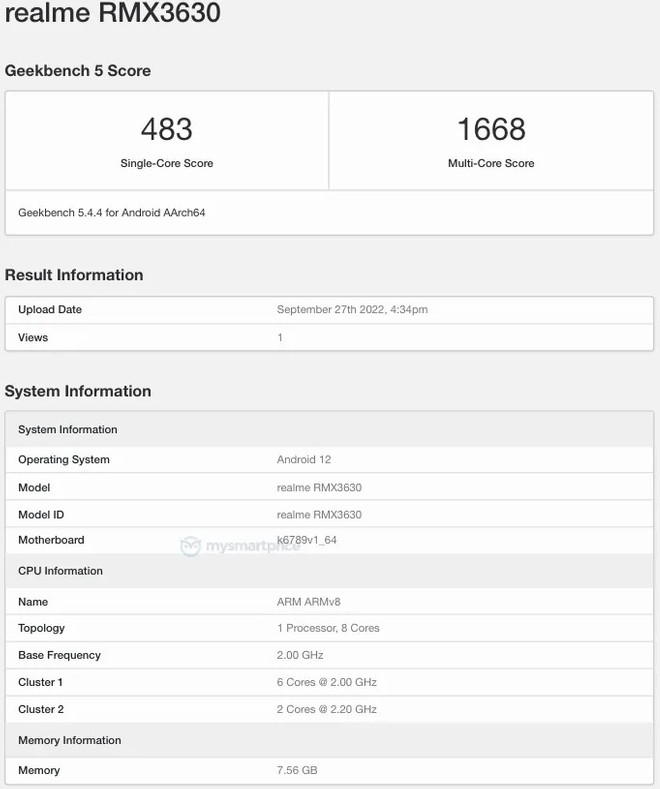 A detail that may disappoint a lot of people is the lack of Android 13, since the trend is for realme 10 to be presented later in the year.

In any case, there is still time for the manufacturer to change the system until the device is launched, which also had its 5,000 mAh battery confirmed in another recent certification.

realme has launched more than seven realme 9 cell phones in India this year. Next year, it will bring the new generation of its flagship series, realme 10.

Previously, the standard model was certified by NBTC, EEC and Indonesia Telecom. The device was also identified in the IECEE database and had battery specifications revealed, in addition to confirming its code.

The realme 10 was listed with model code RMX3630, the same as seen on other certification sites previously. It is revealed that it will come with a 4,880 mAh battery, but the typical capacity would be 5,000 mAh, something similar to the realme 9.

Other than that information, the listing reveals little about the device. The device is expected to launch next year as realme has confirmed that it will only release one numbered line per year.

The realme 9 4G was launched in the second quarter of this year and features a 6.4-inch AMOLED screen with FullHD+ resolution and a 90 Hz refresh rate. Under the hood, it comes equipped with the Snapdragon 680 platform with 8GB of RAM.

In cameras, it has a triple module at the rear with a 108-megapixel main sensor, another 8-megapixel ultra-wide-angle and a 2-megapixel macro. For selfies and video calls, there’s a 16-megapixel front sensor.

Realme 10 is certified by the NBTC and other regulators; model may be released soon

THE really he can no longer launch line 9 cell phones and should go to family 10 soon. The assumption arose after a new device was found on the basis of certifications from regulatory agencies NBTC, BIS, EEC and Indonesia Telecom.

According to website information Gizmochina, the model in question is identified as RMX3630 and has the trade name of “realme 10”. THE absence of the expression “5G” may mean that the device only supports 4G. 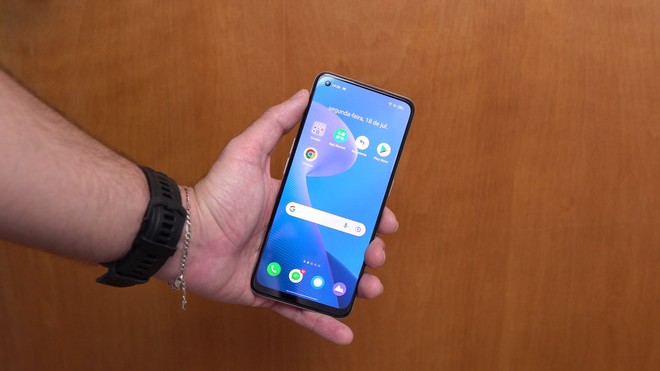 The listings of the regulatory agencies cited above did not reveal any technical specifications of the device, however, they confirm that the device will arrive in Thailand, India and Indonesia. The manufacturer should also bring the cell phone to Europe.

Although nothing official has been revealed about the hardware, we can expect realme 10 to have it. a 6.4-inch AMOLED display with Full HD+ resolution, 120 Hz refresh rate and a hole-punch notch.

It is worth remembering that the really 9 4G It has a Qualcomm Snapdragon 680 octa-core processor and up to 8 GB of RAM. Therefore, it is expected that version 10 of the device will also come with an equivalent chipset, only more updated.

The device can also keep the 108MP primary sensor, the 8MP ultra wide-angle lens, and the 2MP macro lens. The front camera must be 16 MP. Finally, the battery can be 5000 mAh with 33W charging.

And you, what do you expect for realme 10? Tell us in the comments below!

Realme 9 is available on Amazon for BRL 1,599. The cost-benefit is medium and this is the best model in this price range. To see the other 26 offers click here.