TechSmartAerezona Developers
HomeHardwareOfficial Snapdragon 8 Gen 2: here is the heart that animates the...

Official Snapdragon 8 Gen 2: here is the heart that animates the Galaxy S23

The Snapdragon 8 Gen 2 was made official at Qualcomm’s Snapdragon Summit. The new SoC relies heavily on its predecessor, especially on the application cores. However, it benefits from several new features for graphics, photography, connectivity, audio and artificial intelligence. The first equipped smartphones will be announced before the end of 2022. And the Galaxy S23 will be well equipped.

In the field of high-end SoCs, there are Snapdragons on one side. And there are the exceptions of the other. 2022 was no exception. Snapdragon 8 Gen 1 and Snapdragon 8+ Gen 1 have equipped almost all high-end smartphones of 2022. Among the exceptions, we find the European versions of the Galaxy S22, S22+ and S22 Ultra, as well as the iPhone 14. The first are based on Samsung’s Exynos 2200. And the latter benefit from an A15 Bionic or an A16 Bionic.

Read also – Samsung wants to manufacture chips for smartphones in 1.4 nm from 2027

Because the Snapdragon 8 power the majority of the most-watched smartphones each year, it makes sense to follow the launch of Qualcomm’s new high-end platforms closely. And, for that, there is an unmissable event: the Snapdragon Summit, an annual conference organized by the founder to unveil its new baby. This baby, we already know him for the most part, since many rumors have revealed some of his secrets in recent months.

The Snapdragon 8 Gen 2 is largely powered by artificial intelligence

But, as always, nothing beats formalization in good and due form. As expected, Qualcomm announced the Snapdragon 8 Gen 2 overnight, a direct replacement for the Snapdragon 8 Gen 1. Broadly speaking, this new SoC incorporates many elements of its predecessor, including the finesse of 4 nm engraving. There are no major revolutions: eight Kryo CPUs, an Adreno GPU, an NPU, a Spectra image coprocessor, a modem, a Hexagon coprocessor for signal management, etc. So what are the differences? Each element has been improved on the one hand. And on the other hand, artificial intelligence interferes even more. 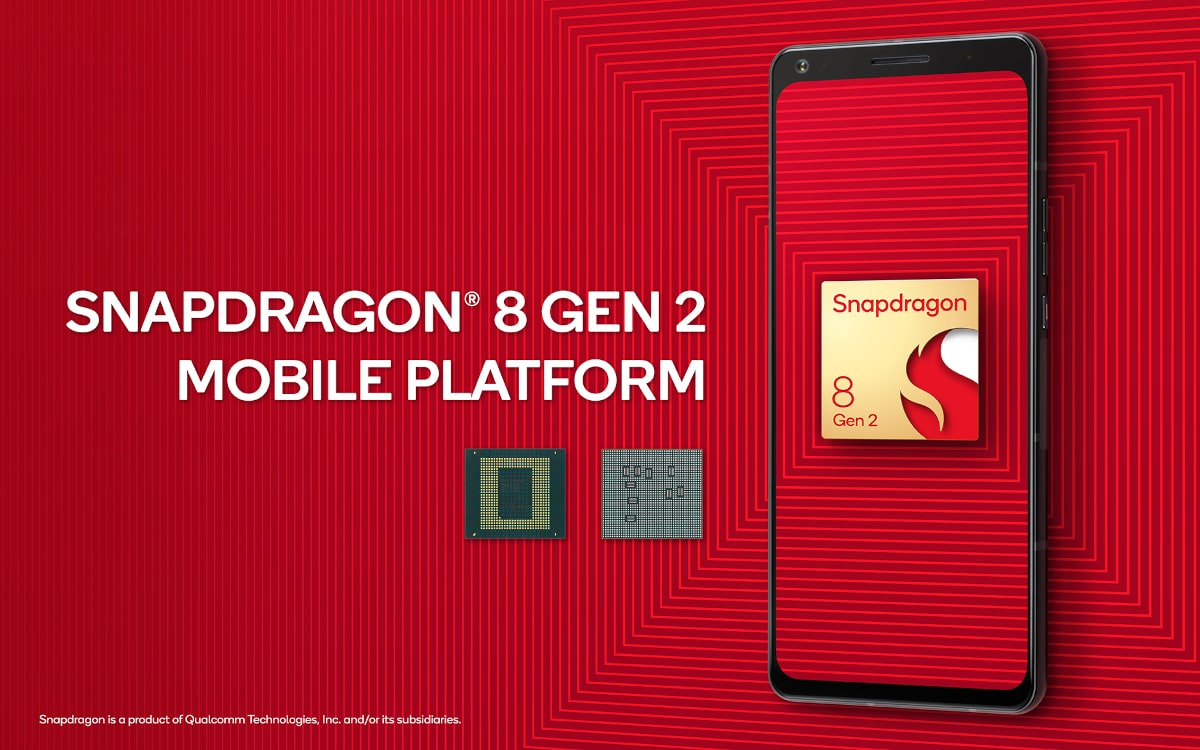 Let’s take each element in order, starting with the CPU part. We find eight hearts, of course. As in previous Snadpragons, there is a very powerful core, four fairly powerful cores, and three power-saving cores. The first is a customized version of the ARM’s Cortex-X3. It is clocked up to 3.2GHz. The following are clocked at 2.8 GHz and the last at 2 GHz. The activation or not of the hearts is controlled by artificial intelligence. Qualcomm promises performance boost of up to 35% and a reduction in energy consumption by 40%.

Then there is the Adreno GPU. Compatible with the latest versions of Vulkan, OpenCL and OpenGL, it promises a better mobile gaming experience. It is the first to be Ray Tracing compatible, with shadow processing being handled directly by the SoC. Obviously, it remains to be seen whether it is relevant to propose Ray Tracing on a smartphone… The SoC supports HDR with 10bit colorimetry and it decodes videos in HDR10+, in HGL and in Dolby Vision. And as it had leaked, it also decodes AV1. Everything is optimized by artificial intelligence, of course. 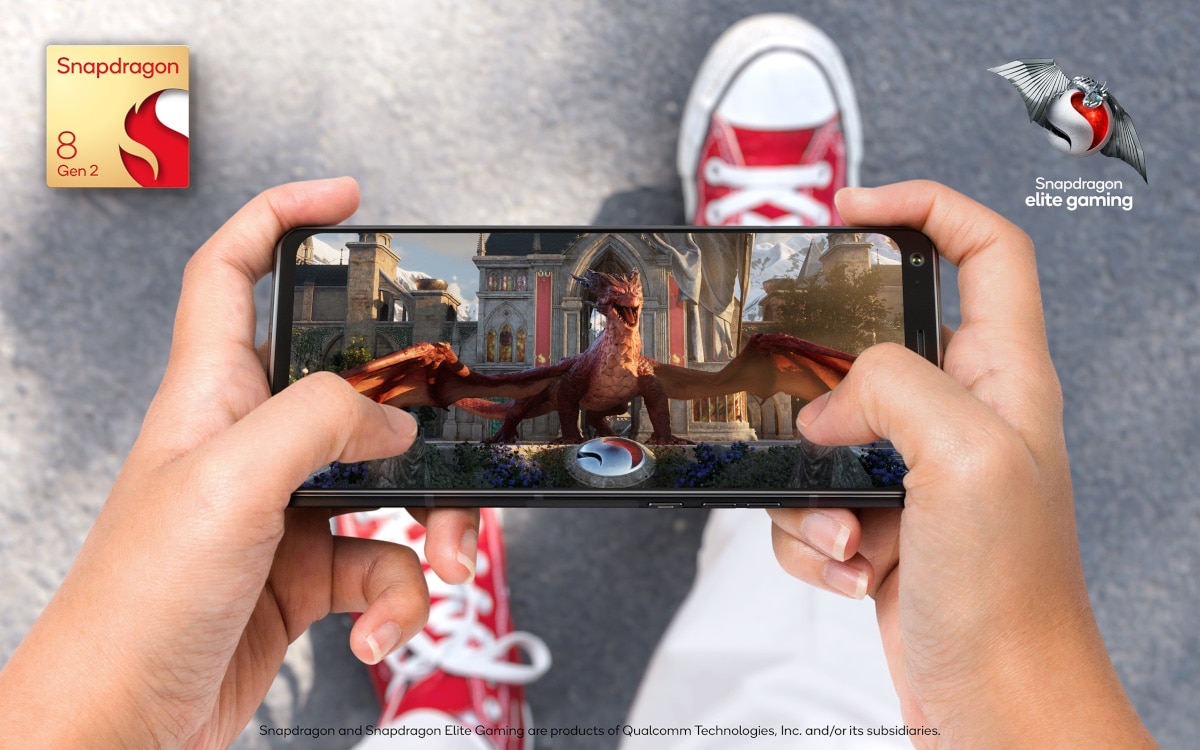 Third important point: connectivity. In this area, the Snapdragon 8 Gen 2 brings a major evolution: the support of the Wi-Fi 7. Qualcomm claims that this is the first marketed SoC compatible with this new WiFi standard. That was before MediaTek unveiled the Dimensity 9200 a week ago, which is also WiFi 7 compatible. The maximum transfer rate reached 5.8 Gbps. The Snapdragon 8 Gen 2 benefits from a new modem, the Snapdragon X70. Its main novelty is to be compatible 5G Dual SIM and Dual Active. Which means it can activate 5G on both SIM cards at the same time. It goes without saying that artificial intelligence has a say here too, to switch from one connection to another depending on the conditions. 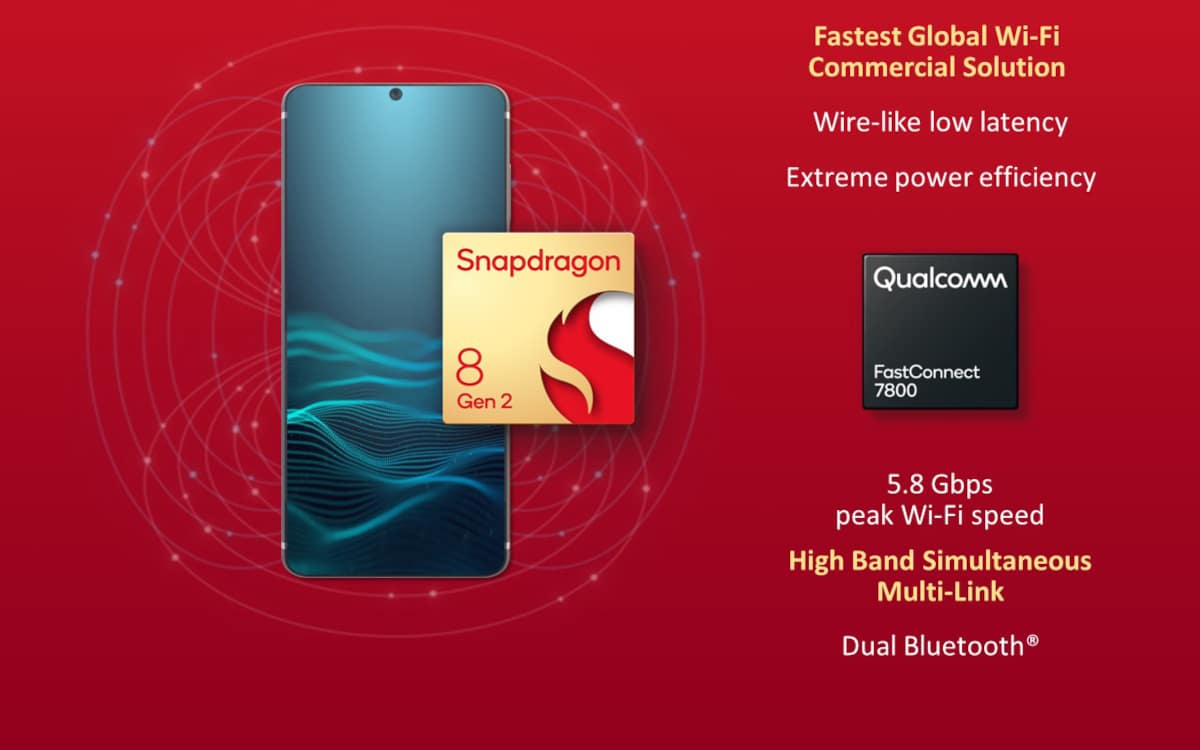 Now let’s talk about audio. Because the Snapdragon 8 are the most used in high-end smartphones, improving the audio experience of these smartphones requires a strengthening of Qualcomm’s proposal. First, the Sapdragon 8 Gen 2 becomes compatible Bluetooth 5.3, which will bring a clear improvement for users of TWS headphones (better sound, lower latency, increased autonomy). Then it supports spatial audio and user head detection. The experience should therefore be similar to that offered by Apple with iPhones and AirPods.

Last important area: photography. The Snapdragon 8 Gen 2 benefits from a new coprocessor Spectra. This co-processor obviously promises images of even better quality than with its predecessors. Artificial intelligence will significantly improve scene, image and object recognition, certainly approaching what Tensor 1 and 2 of Pixel 6 and 7 can do. The goal is to improve the rendering of each element by isolating them and forcing on the HDR when it has an interest. Qualcomm announces that the coprocessor has been further optimized for ISOCELL HP3, the famous 200 megapixel photo sensor that Samsung should use in the Galaxy S23 Ultra expected early next year. The integration of the Snapdragon 8 Gen 2 in the Galaxy S23 is therefore no longer in doubt. 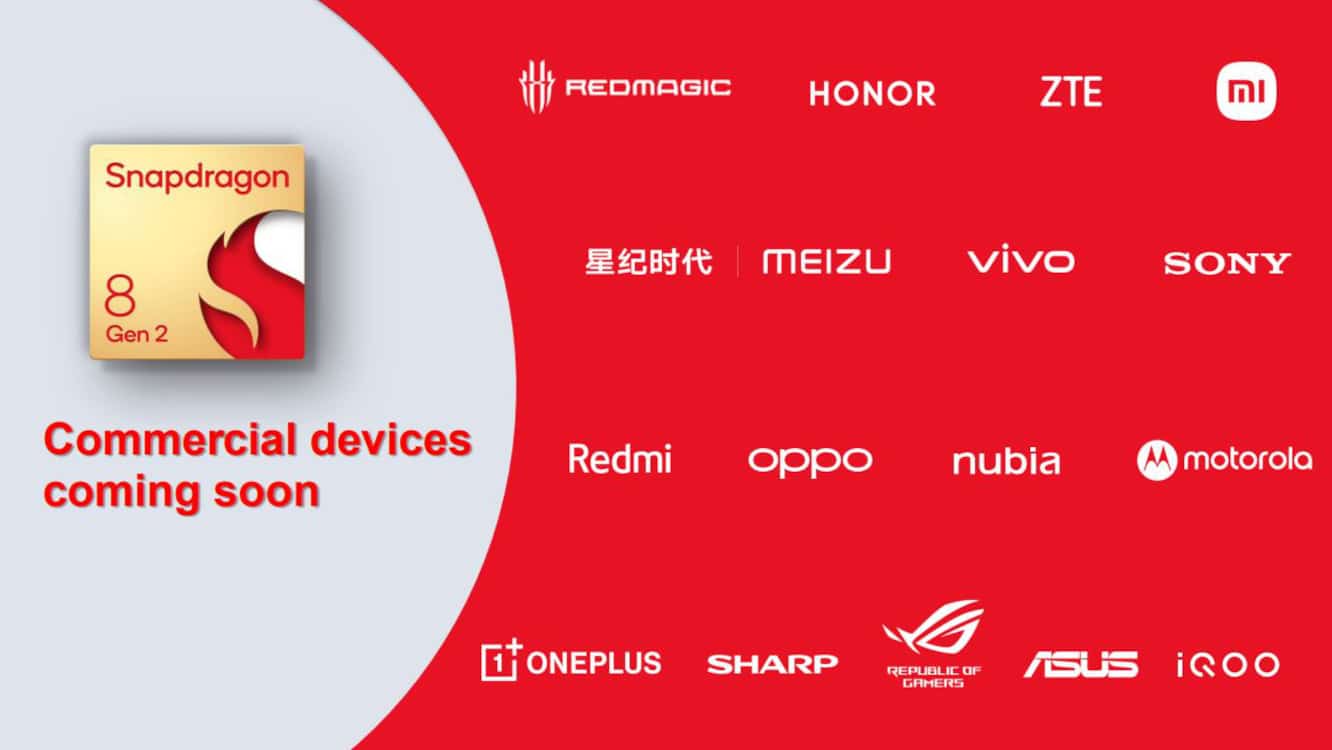 There are many other small new features in the Snapdragon 8 Gen 2, whether on the RAM used, the fast charging standard, or even the geographical location. But the ones we have cited here are the ones that most caught our attention. And that of many manufacturers since many brands were mentioned on the sidelines of this announcement: Asus, Honor, Vivo, Motorola, ZTE, Meizu, Sony, Sharp, Xiaomi or Oppo (as well as all their alternative brands, such as Redmi, OnePlus , iQOO, Nubia, etc). You will notice the absence of Samsung… In addition, the SoC will arrive very quickly in our pockets. Qualcomm claims that the first models will be made official before the end of 2022. Or within the next 6 weeks.