TechSmartAerezona Developers
HomeTech GiantsMicrosoftNVIDIA GeForce RTX 4090 with DLSS 3 for notebooks is up to...

NVIDIA introduced the GeForce RTX 4090 as its new top-of-the-line graphics card — for both desktops and laptops, succeeding the GeForce RTX 3080 Ti as its most advanced GPU for gaming notebooks in 2023. has been tested by the channel Jarrod’sTech on YouTube, highlighting its performance evolution.

The enthusiast tested the Razer Blade 16 notebook equipped with Intel’s Core i9-13950HX processor, NVIDIA’s GeForce RTX 4090 graphics card operating with TGP of up to 175W and DDR5 memory. The set was compared to a Razer Blade 17 equipped with Core i7-12800H, GeForce RTX 3080 Ti and DDR4 memory. See the results below. 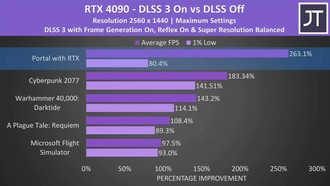 According to tests performed by the channel on several popular games, the GeForce RTX 4090 with DLSS 3 is up to 3.6 times faster than GeForce RTX 3080 Ti with DLSS 2. This data is in line with the manufacturer’s promises for the new generation of supersampling technology with machine learning.

The graphics indicate that the GeForce RTX 4090 with DLSS 3 (in performance mode) is capable of delivering between 80$ and 263.1% more performance than the RTX 3080 Ti in games like Microsoft Flight Simulator, A Plague Tale: Requiem, cyberpunk 2077 and Portal with RTX.

The graphics card also represents a good performance leap in content creation tasks. In tests with Blender and DaVinci Resolve Studio, the GeForce RTX 4090 showed 135.8% and 126% more performance than the GeForce RTX 3080 Ti, respectively, consuming the same amount of energy as its “predecessor”. 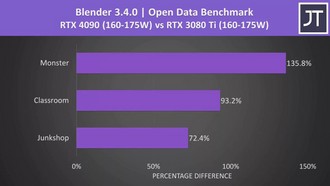 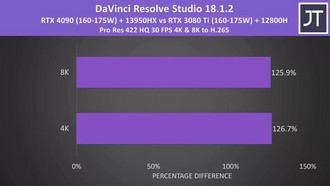 The previous tests carried out by the Jarrod’sTech with the new gaming notebook still lack details – such as clock speed, total device consumption and temperatures reached -, but this information should only be released after the official launch of the Razer Blade 16, which should remain under embargo until February 8.

Are you looking to purchase a notebook with the new generation of NVIDIA GPUs? Comment!