TechSmartAerezona Developers
HomeTech NewsNokia G21 vs Galaxy M32: is it worth sacrificing benefits to pay...

Nokia G21 vs Galaxy M32: is it worth sacrificing benefits to pay less? | Comparative

The Nokia G21 is HMD Global’s bet for the mid-range handset segment, with good value for money. But he is challenged to face one of his main competitors in the market, the Galaxy M32.

Can the Finnish smartphone beat what the Korean one delivers? Let’s find out the answer now, here at TechSmart.

We started with the design with two models made entirely of plastic. If in the construction they do not excite, in the finishing they look for some appeal to attract the consumer. The G21 opts for the textured matte cap to help with grip and prevent fingerprints. The M32, on the other hand, uses mirror painting and vertical chromatic lines, which give the impression of metal.

The Nokia comes with an oval camera block in one glossy piece, with a more modern style than the Galaxy’s outdated cooktop module. At least, the Samsung device has a more compact and lighter body than its rival.

Both phones deliver a drop-shaped notch, typical of more basic segments, and do not offer any certification to protect against liquids and dust. Their biometric reader is integrated into the power button.

They provide support for microSD card memory expansion via the dedicated slot on the triple drawer. In connectivity, no difference between them. We found Wi-Fi in the AC standard, Bluetooth 5.0 and NFC, for approximation payments.

On the one hand, a more modern Nokia look. On the other, the most compact and lightest Galaxy body. We started with a draw.

HMD has been more modest with its smartphone and has only put a 6.5-inch IPS LCD screen in this mid-range. The size is still larger than the Galaxy, but the Korean has the best frontal use.

This is mainly due to the Super AMOLED material present in the M32. It brings a higher brightness level and a superior contrast, compared to the competitor. Apart from the Full HD+ resolution, better than just the G21’s HD+.

At least, the duo has a refresh rate of 90 Hz, to come with more fluidity in the system’s animations. Only Samsung has inserted Gorilla Glass 5 into its phone for extra protection from scratches.

This is an easy point for the Galaxy M32. 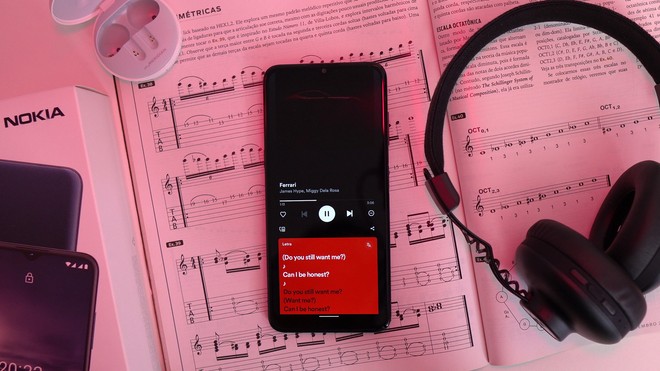 None of the manufacturers decided to improve the audio on these devices. Therefore, you will only have a mono sound system on both, which comes with a single speaker. This ends up compromising the user’s immersion in music and videos, for example.

The M32 has a more powerful sound than its rival, but it distorts more at maximum volume. They don’t offer a good balance of frequencies, as the highs in both end up standing out more than the mids and bass.

Both Finnish and Korean contain a standard headphone jack, but only Nokia sends the accessory in the package.

Sound a little more powerful, against having the phone next to the device. One more draw here. 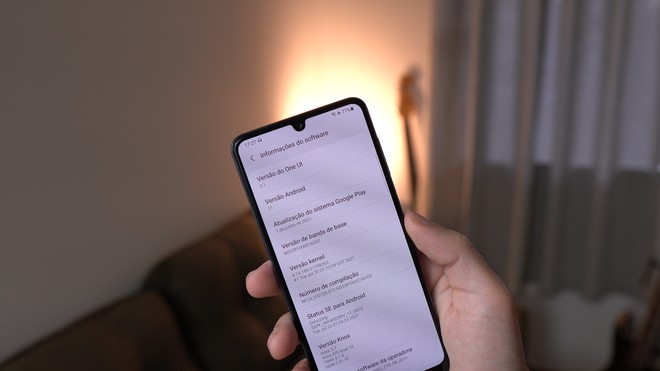 Both the G21 and M32 still come out of the box with native Android 11. Manufacturers promise at least two software updates for the “little robot”, but don’t expect to always have the current security package.

You will find a satisfactory fluidity in these smartphones, mainly due to the high refresh rate of the panel. On the mobile network, they disappoint by the lack of 5G support, which leaves the mobile network limited only to the fourth generation.

Moving on to features, Nokia’s clean interface provides just the basics without major customizations. On the other hand, Samsung’s One UI stands out for functions such as the Edge Screen shortcuts, in addition to being able to take advantage of the dark mode to save battery.

Galaxy’s most complete system gives him the point.

We arrived at performance with a Unisoc T606 platform on the G21, against MediaTek’s Helio G80 on the M32. In this duel of different chips, which one wins? Our speed tests indicated an advantage of around 55 seconds for the Galaxy. He had the biggest difference taken mostly in the second round, when multitasking weighs the most.

The benchmarks also give a victory to the Korean model, but the distance here is smaller between them. In games, they are not impressive and are in medium to high quality, depending on the title played.

For being the fastest of the duo, the M32 scores this time.

In terms of battery, we have a capacity of 5,050 mAh in the G21, a little higher than the 5,000 mAh present in the Galaxy M. And this minimal difference does not seem to influence the practice. We saw in the standardized tests that both yield practically the same time, in the range of 28 hours and 40 minutes total.

The tiebreaker is due to loading. Samsung’s 15 W adapter allows it to reach 100% in approximately 2 hours. It is much less than the almost 3 hours taken by Nokia with its 10 W charger.

So the M32 scores again.

Nokia brings a triple set of rear cameras, against four lenses in the Galaxy module. The Finnish’s 50 MP main takes photos below the segment and lacks sharpness and colors. Something that the 64 MP of the Korean doesn’t do and still fancies in HDR. At night, you’ll also get less noise from the M32’s logs.

Their macro has limitations due to low resolution, in addition to the absence of an autofocus. Samsung’s blur has fewer errors than the rival smartphone. The Galaxy M still comes with the ultrawide sensor differential, to capture much more of the scenarios, with colors close to the main one.

Their camcorder only supports Full HD videos at 30 fps. The quality is pleasant in general, the focus is agile and the sound capture does not suffer from wind noise. What will differentiate in the recording of these two is the presence of stabilization only on the Galaxy M32.

In other words, it’s one more point for the Samsung model.

The Galaxy comes with a higher resolution front camera, but that doesn’t make much of a difference in practice. Both are able to capture high-quality selfies during the day, with a slight advantage over the M32. In dark places, the G21 gets the better of losing less detail than its rival. Both get it right in portrait mode and shoot head-on only in Full HD at 30 fps.

One gets the better of it by day; and the other at night. One point for each.

These intermediaries officially arrived in Europe. The Nokia G21 came at a suggested price of R$1,750, while the Galaxy M32 was launched at a cost of R$2,000. In the current scenario, both can be found for lower prices, but the R$ 1,400 charged by the Finnish is still below the R$ 1,700 found in the Korean.

Thus, Nokia takes the last point of the duel.

The clash between intermediaries ended up with a leftover from Samsung. The Galaxy M32 proved to be the most complete option, with superiority in virtually every aspect. It has the most compact and lightweight body, the AMOLED screen for the highest quality, the most powerful sound, the system with superior features and the fastest performance.

The battery of both yields the same, but the Korean has the fastest charging. He still excels in photos with the rear set, in addition to videos with stabilization. Daytime selfies are superior on the Galaxy, but at night the Nokia does better. The Finnish also offers the most modern design and sends headphones in the box.

If you’re not a very demanding user, you can settle for the G21 and pay less for it. However, the advantages present in Samsung’s competitor may be worth the extra investment, to have greater peace of mind in slightly more intense use.

Do you think the M32 is so superior to the G21? Do you prefer to pay less for Finnish, or do you think Korean pays more? Tell us everything in the comments below!