Samsung has launched the third beta of One UI 15, its custom interface for Android 13, and it didn’t take long for the sparks to jump around one of its novelties: new customization options for the lock screen… in the purest style of iOS 16? The truth is that yes, but no.

Let’s see: that Apple has from time to time flashes of genius that it applies like nobody else, basically thanks to the fact that it only has to worry about everything working well on a few device models… Well yes, why deny it. There is Dynamic Island as an example of a good idea that the new iPhone 14 brings with it. But the same cannot be said for the lock screen customization options.

Thus, while one of the novelties of iOS 16 is the extension of the customization possibilities of the lock screen and the new beta of One UI 5 applies almost the same options -some more, some less- in the same way, Samsung cannot be said to be copying Apple, and less blatantly, just because the change coincides in time. For several compelling reasons. 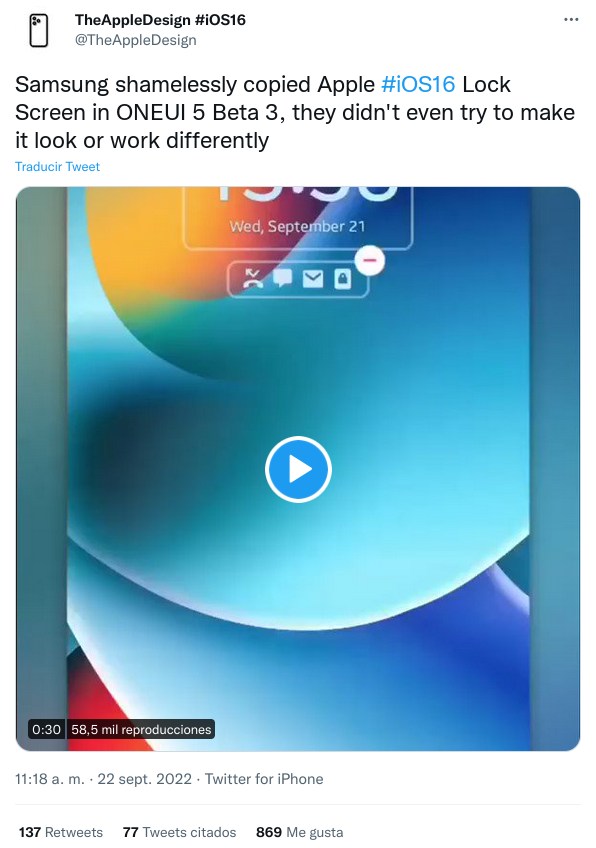 Here is one of the sources of the mistake, via Twitter

The first, because if Apple released the beta of iOS 16 in July, Samsung did the same with the second beta of One UI 5 in August, and the developers do not do magic, nor do they implement these things in a few weeks that are also vacations in half world. The second and final reason why Samsung isn’t copying Apple on this feature is, in fact, the same reason why they rolled out the feature so quickly: because they already had all that.

As Samsung phone savvy users will know, the company’s many proprietary apps for its phones include Good Lock, one for taking One UI customization to a deeper level. The aesthetic customization, but also the practice, eye. Y Among the modules of Goog Lock is that of LockStarone specifically dedicated to the customization of the lock screen that, since the beginning of the year, had most of the options that they are now accused of copying.

What’s new with One UI 5 is that the functionality that was provided separately with Google Lock and LockStar has been integrated into the system’s default options. So no, Samsung hasn’t copied Apple. If anything, it would have been the other way around.

In fact, even before Samsung implemented this type of function in its applications, there were already third-party applications of this type. Applications that do not exist for iOS due to their closed nature. Not only that: beyond Samsung, other manufacturers like Xiaomi have also made their first steps with the customization of everything, lock screen included, and also Xiaomi users have been able to customize it for a long time with different themes that include different layouts, widgetsetc.

That Apple sometimes does things better than the competition is one thing. That it be the first to do it, a very different one that most of the time is not fulfilled, although it may seem otherwise.