It is called Eagle, and it is currently the quantum processor most advanced on the planet. As we told you two days ago, IBM presented it this week during its Quantum Summit 2021, the annual event in which this company presents its latest advances in quantum hardware and software.

In a way, the development that quantum processors are undergoing reminds of integrated circuits during the prolific 1970s.

The Sycamore quantum chip, designed by Google; the Chinese processor Zuchongzhi, and, of course, the new Eagle from IBM, leave no doubt about the enormous potential they have superconducting qubits.

The main alternative to this quantum hardware is qubits that use ion traps, although there is a third technology, neutral atoms, which could also bring us very pleasant surprises in the perhaps not too distant future.

It doesn’t matter if superconducting qubits, ion trap qubits, neutral atom qubits or any other technology finally prevail. What matters is that they are quality qubits

Currently, the technology involved in the development of superconducting qubits seems to be the one that will allow us to have a greater number of qubits. Its potential scalability works in its favor, although these qubits are more sensitive to errors than ion trap-based qubits.

The latter are more difficult to fine-tune, but those that have been developed suggest greater resistance to quantum decoherence, which is the phenomenon that appears when the quantum effects that give these computers an insurmountable advantage over classical supercomputers vanish.

Increasing the number of qubits is crucial. It doesn’t matter if superconducting qubits, ion trap qubits, neutral atom qubits or any other technology finally prevail. What matters is that they are quality qubits. And also that the technology involved allows us to drastically increase the number of integrated qubits in a quantum processor.

Today’s quantum computers lack the ability to correct their own errors, which drastically limits the applications in which we can use them. To have fully functional quantum computers it requires us to solve many challenges, but increasing the number of qubits is one of the most important.

Many more are needed, but Eagle’s 127 qubits is a decisive step forward

At the end of last June we had the opportunity to interview Ignacio Cirac, a Spanish physicist considered unanimously by the scientific community one of the founding fathers of quantum computing.

In 1995 Cirac published together with Peter Zoller the article that is unanimously considered the cornerstone that supports the birth of quantum computing as we know it.

He currently leads the Theoretical Division of the Max Planck Institute for Quantum Optics housed in Garching, a peaceful town located a few kilometers from Munich, and from this position he intervenes in the training of new researchers in quantum computing.

Ignacio is one of the greatest authorities in this discipline, so we did not miss the opportunity to ask him during our conversation how many qubits should it have a quantum processor to be able to correct its own errors. Only then does it seem that we can use quantum computers to solve really significant problems. This was Ignacio’s response:

The number of qubits will depend on the type of problems we want to solve with quantum computers. To tackle symbolic problems we will need to have several million qubits. Probably even hundreds of millions of qubits. Right now we are talking about a hundred qubits, so there is a long way to go. There are people who say that 100,000 qubits may solve a specific problem, but it really takes a lot of qubits.

The figures Ignacio Cirac tells us about invite us to moderate our enthusiasm. Yes to solve significant problems we need at least 100,000 qubits and the most advanced quantum processor that we currently have implements only 127 qubits, the path ahead of us seems unworkable.

However, if we look back for a moment and note that quantum computing was born from a conceptual point of view in the mid-1990s, and also that the first prototypes of superconducting qubits arrived a little over a decade ago, it seems reasonable to note that this technology has developed a lot in a very short time. 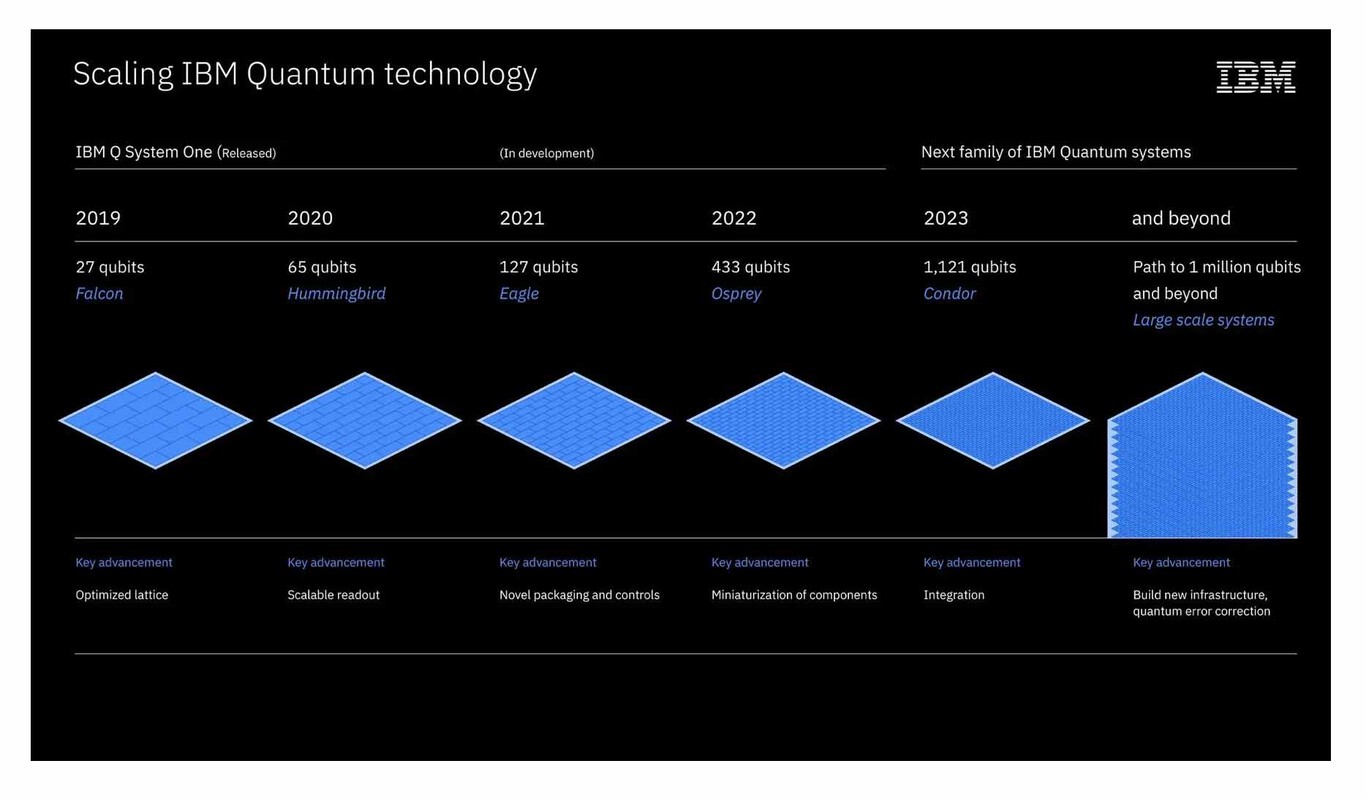 IBM has confirmed that in 2022 It will have Osprey ready, a quantum processor that will agglutinate, if its forecasts are met, 433 qubits. And by the end of 2023 he hopes to have ready Condor, a beast that will integrate no less than 1121 superconducting qubits.

IBM plans to have its first 1,121 qubit quantum processor ready by the end of 2023

However, the forecasts of this company do not end here. In its roadmap IBM declares that it is determined to develop its integration technology sufficiently so that in the medium term it will be possible to produce quantum processors with more than a million qubits.

From that moment, as Ignacio Cirac has explained to us, it is reasonable to assume that quantum computers endowed with the ability to correct your own mistakes will be possible. And when they arrive we can use them to solve really significant problems.

They may be involved in the design of new drugs that are currently unaffordable. Or they may help us design exotic materials with properties we can’t even imagine now. Who knows. Perhaps these quantum computers, which are the ones that really deserve to be considered as such, be closer than we now dare to accept.

App to help communicate with the eyes, now with support for Spanish and other languages

App to help communicate with the eyes, now with support for Spanish and other...