Monster Hunter Rise Review: How does it run on PS5? Monster Hunter Rise arrives on PlayStation 5 with a valuable port full of customization options, which enhances all the qualities of the original.

Almost two years after the debut of Monster Hunter Rise on the Nintendo hybrid, the latest chapter in the Capcom series has now fully colonized the multiplatform marketalso inviting PlayStation users to take up arms to venture beyond the borders of the village of Kamura.

To make the call of the hunt even more inviting, the team led by Ryozo Tsujimoto proceeded to compose a port capable of enhancing the distinctive features of their work and the potential of Sony hardware, exploited properly to guarantee the public an experience highly customizable also from a graphic point of view.

An offer tailored to the hunter

The PlayStation 5 version of Monster Hunter Rise was modeled starting from the solid foundation offered by the port released on PC last January (do you want to know how Monster Hunter Rise fares on PC?), which at the time had returned to reaffirm the versatility of a central resource for Capcom’s manufacturing strategies, or rather the excellent RE Engine. Although the latest iteration of the hunting saga, initially released only on Nintendo Switch, is certainly not particularly onerous in terms of hardware resources, the debut on PC had convinced us of the goodness of the work done by the team on the optimization front. in the center of a conversion characterized by good scalability, net of a relatively small assortment of settings. From this point of view, the PS5 edition of the game quite faithfully follows the structure of the PC counterpart, although in this case the list of settings is much more abundant. Beyond the classic graphic modes, now present in a large part of videogame productions, it is in fact rare that console users can directly intervene on elements such as rendering resolution, texture filtering, shadow quality or ambient occlusion , and in this sense Monster Hunter Rise represents a pleasant exception.

This means that between the two extremes defined by the default modes, which respectively favor frame rates (1080p and 120 fps as the maximum threshold) and graphic quality (4K and 60 fps), there is a long series of intermediate presets that players can compose according to their preferencesexperimenting to find the right compromise between fluidity and aesthetic value.

It is worth specifying that this is a process that is far from necessary, given that the basic options already guarantee more than satisfactory results, but it is indisputable how the route chosen by the developer constitutes a nice added value for the new versions of the title. Just think of all those players in possession of a 1440p monitor, who in Monster Hunter Rise will be able to obtain a discreet performance advantage by scaling the native resolution starting from the highest preset.

Speaking of the solidity of the latter, probably the best choice for most of the audience on PS5, in the course of our combat wanderings we have not noticed particularly significant declines in the frame rate, at least as regards the single experience. While playing online it can happen that you run into some more significant uncertainty, but nothing that compromises the overall enjoyment. As usual, in this phase we prefer not to comment on the overall strength of the multiplayer side, given that the circumstances of a pre-launch test make it difficult to carry out truly accurate examinations. For what it’s worth, however, in the hours spent in the company of the port we did not find any glaring critical issuesand we hope that the official opening of the servers fully confirms our impressions.

As can be guessed, all the improvements introduced with the release of Rise on PC (high resolution textures, improved antialiasing, enhanced effects, etc.) are also present in this version, which in practice is very close to the previous one. A discourse that also involves the asperities inherited from the Nintendo Switch edition (here you will find our first review of Monster Hunter Rise), such as a far from generous polygonal mass, a not particularly advanced lighting system and of the LOD which tends to produce visible lightmap pop-in. Considering the nature of the product, it is clear that these are legacies with a relative weight in the quality balance of Monster Hunter Rise, more than offset by the merits of excellent gameplay and an inspired and enchanting art direction, underpinning what remains one of the best iterations of the series.

Moving on to the peculiarities of the PlayStation 5 version, we particularly appreciated the 3D audio support, which on more than one occasion allowed us to effectively anticipate the attacks of creatures outside the visual field, thus influencing not only the involvement but also on the hunting performance of our alter ego. Against, the implementation of the DualSense features seemed rather superficial to us, especially as regards the adaptive triggers, which as expected are used to add some sensory nuance to the distance combat (holding bows and crossbows) and to the impacts absorbed with the shields. On the other hand, the contribution offered by the SSD to the smoothness of the experience it sports is undoubtedly positive loading times reduced to the bone and practically instantaneous in the transition from the hub to the hunting grounds. Ultimately, in short, Monster Hunter Rise lands on Sony’s current gen flagship with an excellent quality port which, in addition to keeping the production strengths intact, surprises with an unexpected flexibility on the technical sideconcerted to allow the audience to make the most of the playful proposal put together by Capcom. 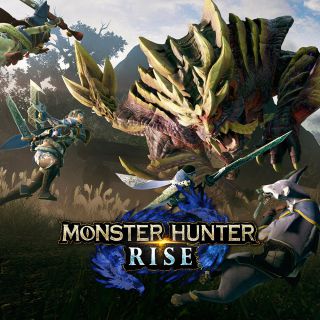 Monster Hunter RisePlayStation 5 Analyzed VersionThe latest chapter of Capcom’s hunting epic is back on the market with a new port that reaffirms the merits of a rich and satisfying playful recipe, at the center of an edition expertly packaged to meet the needs of PS5 users. One year after the arrival of the work on PC, the team proposes a conversion that retains most of the graphic options present in the desktop version, to offer the audience an experience that can be customized according to one’s preferences, moving with a certain freedom between the extremes defined by the classic presets. A production route that confirms the quality of the excellent RE Engine, at the basis of a proposal that also on the Sony flagship does not fail to offer great satisfaction, despite the physiological limits of this type of production. We remind you that the vote reported at the end of the article refers exclusively to the conversion work and does not concern the value of the game itself, defined with the review of the Nintendo Switch version.