TechSmartAerezona Developers
HomeTech NewsMIUI 14 will have fewer pre-installed apps and should focus on performance,...

MIUI 14 will have fewer pre-installed apps and should focus on performance, says executive

MIUI 14 will be much cleaner than previous versions of Xiaomi’s proprietary interface. The information was confirmed by Jin Fan, head of software development.

According to the executive, the idea is to make MIUI 14 much more efficient and faster, and a big news is that now the applications pre-installed, and cannot be deleted, have been reduced to just eight🇧🇷

Users will have the freedom to delete several apps, leaving only the relevant ones: Calls, Messaging, Clock, App Store and Google’s essentials package. 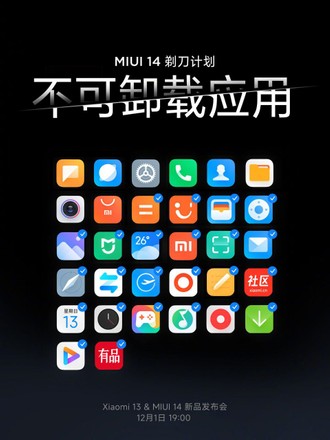 Fan even listed the main changes of MIUI 14:

MIUI 14 should also take up less space in the smartphone’s memory, since the firmware has been reduced by 23%. Another important highlight is the new memory control, which should block the automatic startup of apps that are not essential to the device’s operation.

Xiaomi still says that MIUI 14 should bring several security improvements, but the company does not say whether the software will really not have advertising. The rumor started circulating recently, but remains open.

Finally, it is necessary to remember that the process of early access to the software is already happening.

What did you think of the first highlights of MIUI 14? Tell us your opinion here in the comments.

Two months after receiving the update package for Android 13 in Europe, it was...
Microsoft

Microsoft has announced that it will hold a major event next Tuesday (7) in...