There is no doubt that Microsoft knew how to rectify in time and bet on Chromium to serve as the basis for Microsoft Edge instead of continuing to maintain the original version of it, with a proprietary system engine, launched seven years ago as the modern alternative to Internet Explorer, and that has given so many headaches to the company and the developers.

With a growing user base, Microsoft can be pleased to see how its Chromium-based browser has managed to reach 10% share of users on desktop for the first time in its history, a milestone that comes more than two years after reinventing itself basing its engine on Chromium but offering features that differentiate it from the rest.

According to StatCounter, it was last April when it managed to exceed 10%, precisely with the increase of 0.42 percentage points that reached 10.07% of user sharepremiering the two digits.

A well-deserved growth to apply in the alternative to Chrome

Overwhelmingly, Google Chrome continues to be in first position, which despite losing 0.65 percentage points, stands at 66.64% of the market. 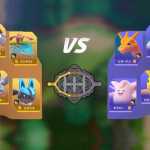 ‘Pokemon Unite’, the DOTA MOBA, will open its beta on Android in March

In third place is Safari, Apple’s web browser, which, thanks to an increase of 0.05 percentage points, is very close to Edge with a 9.61% user share. In fourth place is Firefox with 7.86% after rising 0.29 percentage points.

This is the scheme of web browsers for desktop computers and laptops, although Regarding mobile devices, there have been hardly any changes, where Chrome remains with 63.57%, and Safari with 24.82%taking a 90% share of users as a whole, despite the existence of many alternatives, at least in the Android ecosystem, which also await their opportunity to grow.

Since last month, it can be said that Microsoft Edge is the second most popular desktop web browser, and everything indicates that it will continue to grow in the coming months, having become a solid and convincing alternative, especially for those who want to abandon Chrome. for another option that is capable of meeting your needs.