Met Eireann has revealed when the heat spell will come to an end as a low system is set to take hold.

Weather Alerts Ireland warned that a low-pressure system will stall near the country on Friday into Saturday and Ireland will be lashed by heavy rain and possible flooding this weekend.

They added: “Flooding is possible especially in the South West where over 80mm of rain is possible on higher ground in a 24-hour period! Over 50mm is possible in 24 hours in other South Western spots.” 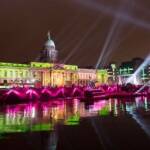 While there is no further forecast for Dublin, here is what the national outlook says:

A Met Eireann forecaster said: “Clear spells and scattered showers at first but another spell of heavy rain will move into the southwest overnight. Lowest temperatures of 8 to 11 degrees with moderate to fresh and variable winds.

“Saturday will be a cloudy and wet day with spells of rain and heavy showers. Some of the showers may be thundery. Highest temperatures of 12 to 16 degrees in a moderate to fresh south to southeast wind.

“Further spells of rain and showers across the country during Saturday night. Lowest temperatures of 9 to 13 degrees with light to moderate south to southeast winds.

“A mix of sunny spells and widespread heavy and possibly thundery showers. Highest temperatures of 13 to 17 degrees in a moderate to fresh south to southwest breeze

“A mix of clear spells and scattered showers, heaviest and most frequent in the west and northwest. Lowest temperatures of 8 to 12 degrees with light to moderate south to southwest winds.”