TechSmartHow smart tech is changing life
HomeTech NewsMeet the Google campus with roofs made up of 90 thousand solar...

Over time, man has made constructions that have marked a milestone in the architecture of the time in which it was built, and that remained as a legacy to be admired by later generations.

The Tower of Pisa, the Sydney Opera House, the Pyramids of Egypt, are just some of the structures that demonstrate man’s ability to build unconventional works, an aspect that can also be seen in the new google campus located in the Bay View areanear NASA’s Ames Research Center in Mountain View.

Already in 2013 the company had announced the construction of this complex, which was launched in 2017. It was not until recently that Google has transferred part of its workforce to this site. 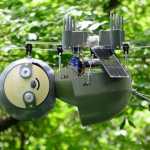 Slave robot that monitors the environment and nature

When observing the structure of the buildings that make up the campus, its design is remarkable, especially the roofs that in the distance they look like the scales of a dragon.

However, these are about 90 thousand solar panels that have the ability to generate 7MW powerthis being almost half of what the offices of this complex need to function, thus showing Google’s intention to base its operations on renewable energy.

The rest of the energy needs will be covered by wind farms located in the vicinity of the campus. In this way, Google ensures that the offices will remain operating under green power 90% of the time.

For its construction, the fundamentals of biophilic design were taken into account so that the occupants could be provided with natural views from any area, while the clerestory windows (highest part of the structure) are responsible for regulate the entry of direct light and its impact on desks through blinds that open and close automatically as the day goes by.

Another notable aspect in this complex is the use of outside air to completely feed the ventilation system. In terms of its size, this campus is designed to accommodate a number of 4 thousand people from the advertising division.

Added to this, the campus will have a Convention Center with seating capacity for a thousand people and a space that will serve as hotel accommodation for 240 people who work in offices for a long time.

HP Instant Ink is a service that is intended to make our lives easier....