Lenovo Tab P12 Pro, a powerful tablet to forget about the PC 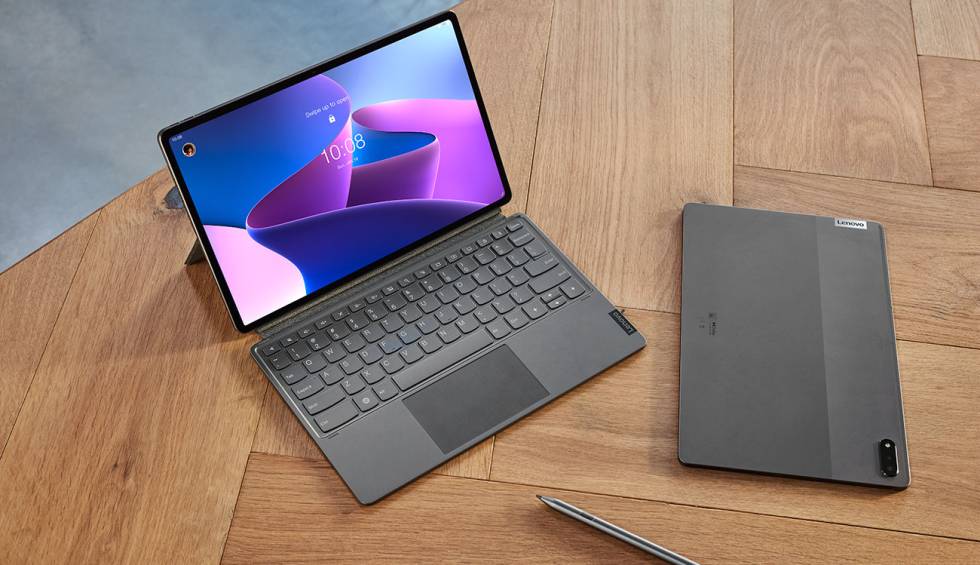 The tablet market is in one of its best moments, there is no doubt about that. This one peaked throughout the pandemic, when so many of us need these types of devices for many reasons. But above all to entertain ourselves and even work remotely with the forced confinement. But tablets have been with us for more than a decade, and in that time Lenovo has been one of the main players in this segment. Above all, its high range, which boasts of being one of the best equipped and most versatile. We have had the opportunity to test the Lenovo Tab P12 Pro, which is the top of the firm’s range, and the impressions have been really positive.

A tablet with enough power to not depend on the PC

Without a doubt, this is one of the best-prepared tablets on the market, and above all one that offers the highest quality in all its aspects. Starting with its construction. When you have this tablet in your hands you realize that it is not just another model. Its design is very polished, it feels light thanks to the aluminum alloy in which its body is built, and above all because of its very thin profile, only 5.63mm, it seems unbelievable that such advanced technology can be integrated in this thickness. . Without a doubt, it is a tablet that stands out on the outside, and invites us to hold it effortlessly.

This Lenovo tablet has been designed to be a textbook all-rounder. There is more to see that it is prepared for all kinds of situations. And it is that it has an exquisite multimedia section and a power that gives plenty to play with the most demanding titles or work in business environments without having to miss the laptop. And it is that, although it is a tablet that has Android 11, it comes with everything necessary so that we do not miss everything that that laptop would be capable of giving us.

Picture and sound of first

This tablet gives us exactly what we expect when we are looking for something top notch, with the best features. And it is that in the multimedia section it shines with its own light. There is more to see some recent content on different platforms to see how that HDR10 + enters our eyes. This gives us vivid colors, which are even more spectacular thanks to the AMOLED panel it has and a 2K resolution of 2560×1600 pixels that is not so common to find on tablets. If we add to this that it has a refresh rate of 120Hz, we can get an idea of ​​what this tablet can give visually.

This screen also has bezels that are quite contained in size, so its 12.6-inch size does not feel too big in the hands, since the vast majority of the front of this panel is used. But there is another aspect that gives us an idea of ​​the potential of this tablet, such as sound, since it has four JBL speakers. These are located on the sides of the tablet, and they transmit us excellent surround sound thanks to Dolby Atmos and Lenovo Premium Audio. And not only that, it manages to reach a really high volume without distorting the least, which has merit with the thickness of this tablet.

In addition to that, we notice a powerful bass that puts you fully into the action of a movie or series, or transmits you a solid and powerful sound of your favorite music, also in high resolution. A section that is just as enjoyable when it comes to playing, because the trio of colors, refresh rate and sound make us vibrate with each game we try on its huge screen. In the sun it is a screen that behaves well, although as you can imagine a little more is always good in the most extreme cases, but we cannot complain.

The camera that it has has pleasantly surprised us, since it has two cameras behind it, a main 13-megapixel camera and a 5-megapixel ultra-wide angle. We already know that even high-end tablets do not usually take much care of this aspect, but of course in this case the results are very good, at the level of a good mid-range mobile. In front it comes with an 8-megapixel camera, which is accompanied by a ToF sensor, which is capable of accurately scanning our face in order to recognize us. It comes with a fingerprint reader that is integrated into the power button, and is therefore easy to use, since every time we want to access the tablet it will quickly recognize us.

As we were saying, with this tablet we are not going to miss our PC, at least that is the feeling it has given us. First, because it has a very powerful processor, it is a Snapdragon 870, which has a high-end vocation, and that moves everything you throw at it with ease. Its high clock speed is capable of moving any game with extreme fluidity, displaying and editing large images quickly, or loading high-resolution content without noticing any lag.

The 8GB of RAM is more than enough, especially when we are talking about tablets. With it, he is able to move through multitasking without the slightest shock. We have been able to open several apps, and return to them in the state in which we left them after spending many minutes with different ones. That’s why it’s perfect for work, because it doesn’t matter if you’re writing an article, while splitting your screen to show you a PowerPoint report, and while you’re also watching a video necessary to be able to carry out our tasks. This tablet manages all those features more than enough.

One aspect that we have loved about this tablet is that it has a functionality that allows it to be converted into a secondary screen for the laptop PC. And it is that with Lenovo Project Unity we can enjoy this functionality for the screen. Something that we can also do by maintaining its touch functions, so we can see the desktop of our Windows PC and move around it just by sliding our fingers. It is a tablet that performs well in the connectivity section, where its Wi-Fi 6 connectivity stands out above all, which allows us to connect at high speeds. In our case we have had connectivity of around 400 or 500 megabytes, both downstream and upstream. Therefore, we can play without cuts on the main streaming video game platforms.

In the autonomy section, it must be said that it is a tablet that behaves very well. And it is that despite the power it possesses and the high-resolution and large screen it has, it is capable of staying on for a whole day without major problems with daily use. If it is something more sporadic it can extend several days. The 30W fast charge allows us to fully charge it in a reasonable time.

Accessories to squeeze it thoroughly

If the hardware of this tablet is outstanding, when we combine it with the original accessories that Lenovo offers as a complement, it becomes an extremely productive device. And it is that it could be said that this tablet makes all the sense when we have the Lenovo Precision Pen 3 that is included with it. It is a pencil that is noticeable with the right weight in the hand, to convey the sensation of holding a pen. And the most interesting thing is that Lenovo’s operating system and software in general go a long way to this experience. Because as soon as we remove the pen from its base on the back of the tablet, where it attaches magnetically, a large number of tools open up before us to take advantage of it.

The use of the pencil is very precise, in fact, we can illustrate very naturally, and take freehand notes with the Instant Memo app that we always have on hand to be able to take quick notes in this way. Being able to recharge the stylus from the tablet itself certainly seems like a big deal to us, and when we use Lenovo’s official case, this stylus stays protected from any knocks. Additionally, Lenovo has added many personal aspects to the tablet software that benefit the use of the pen. For example, the possibility of freehand writing web addresses within the browser, and a large number of other utilities to get the most out of your pencil.

The optional keyboard is the definitive aspect to turn the Lenovo tablet into that PC substitute that many of us look for when we buy a tablet like this. Its construction is of high quality, with low-profile keys that have an exquisite touch if you write for many hours a day, very similar to what we can find in other laptops. Of course, we miss backlighting on the keys, something that is very difficult to give up when you have already had it before, because it makes typing very difficult at night.

Well, the sensations with this Lenovo tablet have been very good. It can be easily summed up in that when you have it in your hands you notice that you are facing a first-rate tablet. Its construction is of quality, the screen has an outstanding color and resolution, and something that has left us speechless is the quality sound that it has, which makes many other high-end tablets pale. With this tablet we have had the feeling of being in front of a PC, because the screen is large enough to be able to work with many elements on it, or play without leaving our eyes as in other models.

In addition, we practically do not miss any application that we could use in this one. Although it must be said that Android software for tablets still has a lot of room for improvement, and that it is an aspect in which much more work would have to be done, since some essential aspects can be wasted. Since sometimes it seems that you could get more out of the screen with an even more specific interface for a tablet like this. But this is not a problem of the Lenovo Tab P12 Pro, but of all Android tablets. The hardware of this tablet is outstanding, including its accessories. But it is in the software where we see that something more could be done, although we are sure that for most users it will be enough. In short, if you are looking for a tablet that offers you the best specifications in every aspect, and that can replace or even complement your usual PC, this is undoubtedly one of the best purchases you can make.