The Variable State team has already had the opportunity to make themselves known in the universe of narrative-based videogame adventures. After challenging the laws of cinema in Virginia (at this link you can read our review of Virginia), the small software house is now back to move the virtual camera in Last Stop. This time, however, more than the Seventh Art, the British authors have decided to offer their own interpretation of the increasingly varied universe of TV series.

Supported by Annapurna Interactive, one of the leading publishers in the field of Indie development, Last Stop stages a rhythmic story, structured in chapters to be experienced through the eyes of three different protagonists. Between curses and space-time portals, the narrative plot unfolds in a contemporary London, but troubled by supernatural events. Survivors of an unusual epic in the streets of the City, we are ready to offer you our travel report, in view of the debut of the work, expected on Thursday 22 July on PC, PS4, PS5, Xbox One, Xbox Series X | S and Nintendo Switch.

The lives of the protagonists of Last Stop have been moving for a long time along immovable tracks, harnessed in a claustrophobic tunnel from which it is difficult to escape. Although very different from each other, the characters painted by Variable State share a strong intolerance towards the life they face, full of shortcomings and a constant sense of oppression. To unleash this state of inner suffering, we find different reasons for each of our protagonists. John is a middle-aged man, single father of an extremely smart girl, to whom he is unable to devote time and energy: overwhelmed by debts, he is in fact exhausted every day by a job he hates. At the antipodes, we find instead Meena, an unscrupulous woman who has chosen to vote their existence for their career, putting those who love them and have always been close to them in the background. It closes the circle, indeed the triangle, Woman, an impatient teenager, struggling with an apprehensive sister and a disposition as rebellious as scarcely empathetic. The sudden manifestation of strange paranormal phenomena within the confines of the London suburbs brings together the threads of the fate of three characters so different from each other. Space-time portals, disappearances of people, and exchanges of bodies are some of the circumstances that will lead John, Meena and Donna to walk the same underground paths of the City, in existences in which every subway stop seems to offer an escape from a lifetime. that none of the three really have the courage to change.

As already mentioned, Last Stop chooses to marry a structure from TV series: each character will see his condition evolve along a path divided into chapters, each of which can be easily assimilated to a television episode. Between one and the other, there are also the traditional summaries of the events of the previous episode, so as not to lose the thread between one gameplay session and another. Continues also contribute to reinforcing the similarity cliffhanger , which mark, without exception, the conclusion of each narrative segment. The events of John, Meena and Donna take place in the same time frame, with the obligation for the player to follow a horizontal line of advancement of the narrative. At the beginning of each chapter, it is in fact possible to choose the order in which to follow the protagonists, but no passage of their lives can be skipped. So, if, for example, we decide to start Last Stop as John, before we can go back to following his daily life it will be necessary to venture into the lives of the two supporting actors. A structural choice that proves to be extremely effective in terms of rhythm, with the narrative that keeps the level of interest of the player constant, also thanks to an excellent direction and an appreciable British humor, which occurs frequently and does not hesitate to call into question the production dynamics of the videogame industry itself. However, despite the desire to advance in the adventure remains constant for the entire duration of Last Stop, which is approximately ten hours, the first phases passed you start to feel that something is missing from the appeal. In fact, the lives of our three alter-egos only touch each other from afar for most of the adventure, with little meaningful or incisive interactions, to the point that the latter could also be completely absent, and this would not radically change the gaming experience. In fact, it is only the final chapter that really manages to put the lives of John, Meena and Donna on the same path, for an epilogue that is clearly the most successful part of the production.

Faced with an absence of true horizontal interactions, Variable State prefers a vertical approach, focused on analyzing the relationships between the protagonists and the world around them. For several reasons, all three characters from Last Stop find themselves living a secret life, difficult to combine with love and work. The food for thought proposed by this premise are certainly intriguing, but unfortunately they do not assert themselves with the same force within the three narrative lines. If the dark past and the icy nature of Meena are in fact the protagonists of an interesting narrative parable, we are instead sorry not to find the same degree of introspection in the arc dedicated to Donna.

A life of choices

On the gameplay front, Last Stop is proposed as a traditional narrative adventure from the cinema, with the action characterized by the continuous alternation between the proposition of dialogue choices and Quick Time Event. However, it should be specified that the first ones will not incisively modify the evolution of the plot, except in the last bars of the story. On the contrary, often the alternatives proposed by the game are only formal, with user-selectable answers that do not dynamically change the relationships between the protagonists and the world around them. Precisely this circumstance manifests itself in our opinion as the less successful aspect of Last Stop, which does not offer the typical branches of other similar titles, in the Detroit: Become Human style, nor of other even more narrative towed productions, such as the recent Where the Heart Leads (intrigued? Read our Where the Heart Leads review).

The dynamics linked to the Quick Time Events are also very basic, which prove to be more stimulating only in the direction of the conclusion, with combinations of actions that are more articulated. Moreover, this happens in conjunction with the launch of a finally choral narrative and the proposition of alternatives capable of generating a concrete impact on the epilogue of the story of John, Meena and Donna. Precisely for these reasons, as already mentioned, the final sequence of Last Stop presents itself as the most successful of all. In closing, we emphasize the extreme pleasantness of the game’s soundtrack, which effectively accompanies the progress of the narration, which is however fully localized in Italian. 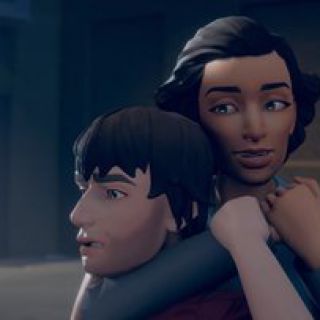 Last StopPC Analyzed VersionUltimately, Last Stop is presented as a pleasant experience, able to offer interesting food for thought on the reasons that can push a human being to make a change in their existence. In spite of an extremely pleasant rhythm and a large number of twists, the narrative of Variable State fails to really leave its mark in the heart of the player who, thanks to the manifestation of real alternative tracks only at the end of the game, ends not to feel too much empathy with the actions of John, Meena and Donna. Net of what we perceived as shortcomings for a narrative work, Last Stop still offers several hours of entertainment, for an IP that leaves the way open for a sequel, while effectively closing the proposed plot. And a probable sequel could be able to file the defects highlighted, to shape a more engaging title.