Pat Gelsinger is eager to change things at Intel. The company, which for a while she seemed sleepy, has been proposing changes in various areas for a few months. Now it unveils a strategy to try to regain its former leadership position in the field of semiconductors.

For this, it launches a roadmap with new marketing names for its future manufacturing technologies and makes it clear that it will manufacture chips for others. In fact has already reached agreements with Qualcomm and Amazon.

Intel wants to lead in 2025, but TSMC and Samsung do not make it easy

Intel’s speech seems clearly intended to try to get investors and industry to regain confidence in a giant that had been left behind and that has allowed both TSMC and Samsung to lead a market that previously dominated with solvency.

The intention is to regain that throne in 2025, and that is when they will try to have a new generation of ASML chip making machines based on Extreme Ultraviolet Lithography.

Another of the pillars of this strategy will be to manufacture not only its chips, but also those of other large companies in the technology industry. The first customers will be Qualcomm and Amazon, and the former will take advantage of for example Intel 20A technology when available. Meanwhile, Amazon will use that Intel capacity to manufacture the processors for its servers on AWS (Amazon Web Services).

Goodbye to nanometers, they are no longer useful as a reference

Pat Gelsinger seems determined to change that situation, and in addition to investment plans in new manufacturing plants now propose a roadmap with what will be its innovations in manufacturing processes. 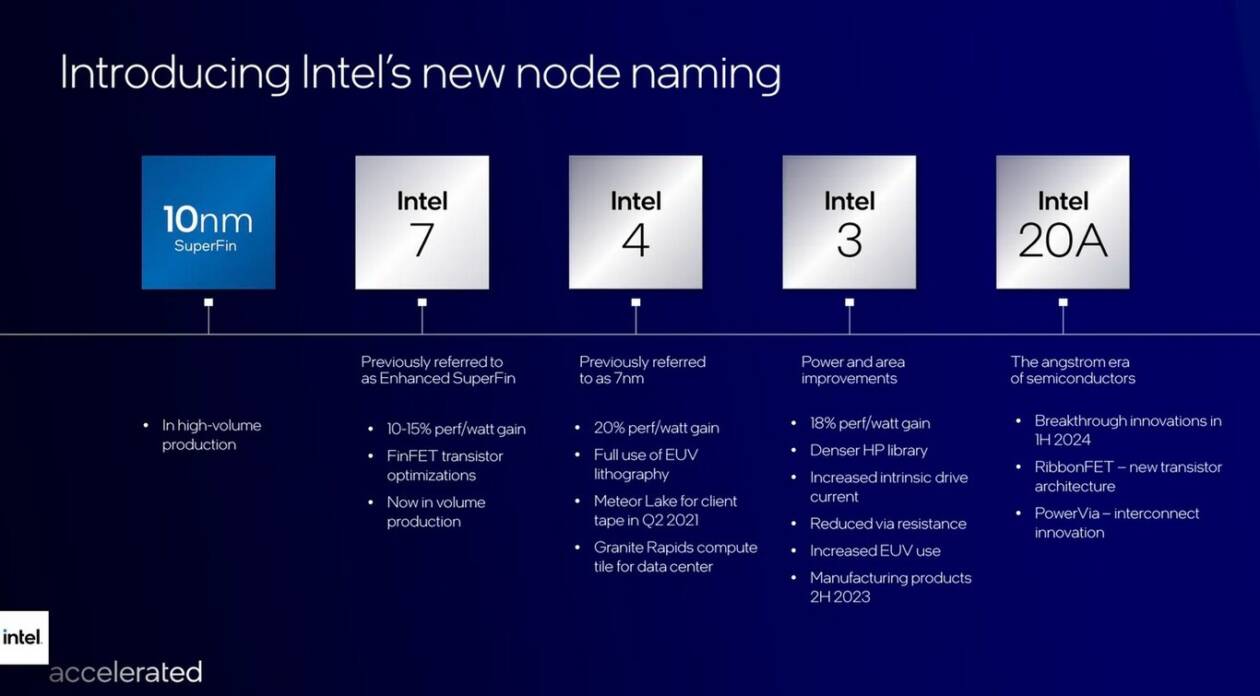 On that roadmap the specific mention of nanometers disappears, something almost logical considering that its rivals have been showing their chest with their 7 and 5 nm processes in recent times while Intel was anchored in the 14 nm and only now has it begun to launch chips in 10 nm.

It is true that in many ways Intel’s 10nm technology is comparable to TSMC or Samsung’s 7nm technologyBut be careful because both are already moving towards 5, 3 and even 2 nm for the next few years.

Thus, future third-generation 10nm chips expected to arrive in late 2021 will be called “Intel 7”. In 2023 “Intel 4” will arrive, with which it will go to 7 nm photolithography (although the name does not reveal it).

With “Intel 3” (probably in 2024) will come a refined version of that previous process, and beyond is “Intel 20A“, with an” A “that refers to the angstroms (20 angstroms = 2 nm) that theoretically will become the new way of talking about photolithographic scales. Finally,” Intel 18A “was mentioned, which will begin to develop in 2025 but which will surely take much longer to appear in chips.

What does the emoji “Zzz” really mean on WhatsApp and when to use it?

How to schedule automatic restart on your Samsung Galaxy

GIGABYTE M32U Expands Its Family of Gaming Monitors to 4K

What does the emoji “Zzz” really mean on WhatsApp and when to use it?

Macau may lose the bet in the short term, but win in the long...

How to schedule automatic restart on your Samsung Galaxy

GIGABYTE M32U Expands Its Family of Gaming Monitors to 4K