A week ago we saw a leaked benchmark where the Core i9-12900K, Intel’s next top-of-the-line processor for the general consumer market, managed to outperform AMD’s Ryzen 9 5950X in multi-threaded performance, a top-of-the-line chip. which, as many of our readers will know, is the most powerful processor ever today in the general consumer market, both single and multi-threaded.

That first benchmark has been amplified by a new leak indicating that the Core i9-12900K could be, at best, up to 26% more powerful in single wire than the Ryzen 9 5950X. First of all, I want to make it clear that we are talking about a very big improvement, so much so that, to be honest, I find it a bit difficult to believe. As it is a leak, it comes from an unofficial source, and therefore it is legitimate to doubt it, without implying any kind of bias.

If you look at the attached graph, you will see that the Intel Core i9-12900K obtains, in Cinebench R20, a result of 810 points, while the Ryzen 9 5900X achieves 649 points. As we anticipated, the difference is very large, and it becomes more palpable when we directly compare the scores instead of talking about percentages.

Why does this seem like a somewhat exaggerated increase to me? Well, very simple, because Intel has not achieved such a big jump in single-wire performance for years, because the Intel Core i9-12900K it won’t be able to go beyond 5.3 GHz frequency with an active core, and because that 26% improvement would have to come, almost entirely, from a direct increase in the CPI, which I find very difficult to achieve with a single generational leap. 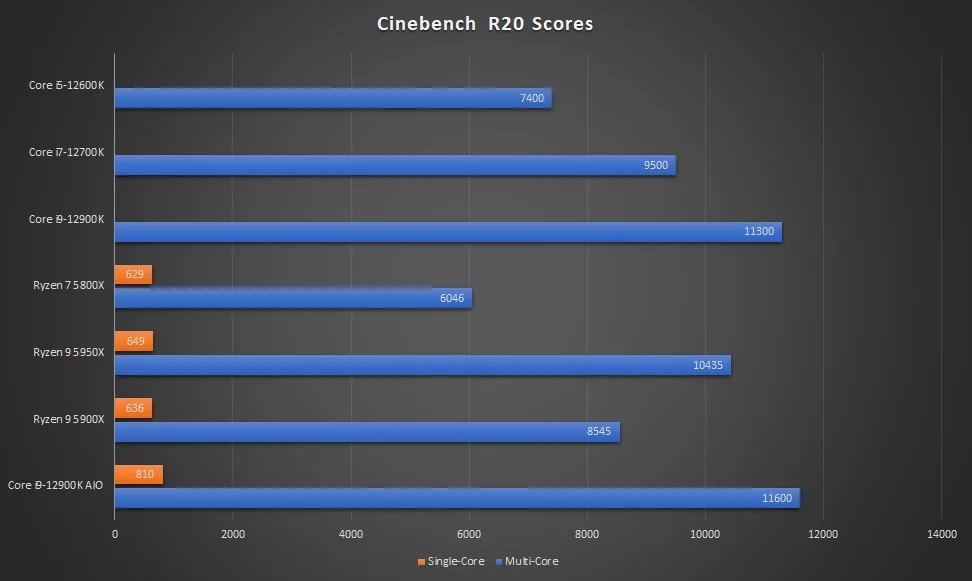 We know that this chip will use Intel’s 10nm SuperFin process, the same as we’ve seen in Tiger Lake processors. However, the architecture will be very different, as these use Willow Cove cores, and the Intel Core i9-12900K will come with 8 high-performance Golden Cove cores. Yes, this architecture represents a “tock” compared to Willow Cove, that is, an improvement in terms of CPI. It will also feature 8 high-efficiency cores, based on the Gracemont architecture.

Golden Cove will increase the IPC against Willow Cove, that is clear and we can take it for confirmed, so yes, the most likely is that the Intel Core i9-12900K will manage to surpass the Ryzen 9 5950X in single and multi-threaded performance, but talking about an improvement in the CPI of 26% compared to the Ryzen 9 5950X is something quite difficult to believe. I don’t dare to rule it out entirely either, but if I remember correctly Intel has never managed to make such a huge leap in terms of CPI, and I find it hard to believe that it will achieve it right now.

We also know that Intel Core i9-12900K processors will feature a Integrated Intel Xe Gen12 GPU, configured with 256 shaders and capable of offering quite acceptable performance, always taking into account the limitations that these types of graphics solutions usually have.

Its launch was expected by the end of this year, but a new leaked roadmap, and coming, in theory, from Intel itself, indicates that it would have been delayed at first quarter of next year. The Alder Lake-S processors will use the new LGA-1700 socket and 600 series chipset, and will be compatible with DDR5 memory and the PCIE-Gen5 standard.