Industry Review: A narrative shooter in a dystopian future

The review of Industria, FPS that focuses strongly on narration and which tells of a dystopian future after the fall of the Berlin wall.

Steve Chapman and David Jungnickel are the founders of Bleakmill Games, an independent studio with offices in Berlin and Glasgow. In 2015, in an unidentified time of day between part-time jobs and university studies, they began the development of Project 15, which later became industry, uo shooter with a strong emphasis on the narrative sector that is inspired by the sacred monsters of the past, such as Half Life and Bioshock (if you want to refresh your memory, here is our review of Bioshock The Collection). After six years of development and as many new members in the team, the title finally sees the light and debuts on Steam on September 30, 2021.

Passion and love for the video game, however, are emotions that are difficult to control and we know this all too well in the indie world (here our special dedicated to Cuphead, Tunic and Narita Boy). Not even the time to enjoy the well-deserved post-production rest, which Bleakmill announces porting to next-gen consoles. After having thoroughly tested this version of Industria, we are finally ready to tell you how our journey went in the fictional town of Hakavik.

The Berlin Wall has fallen

Nobody would like to receive a call in the middle of the night, least of all from a loved one. Marta knows it wellthe protagonist of Industria, who, having dozed off on the sofa at home illuminated by the light of the television, hears the phone ringing.

On the other side of the phone is Walter, colleague and companion of the scientist, who communicates to her – in a state of anxiety mixed with excitement – two important news: the fall of the Berlin wall and the worrying ATLAS malfunction, the artificial intelligence the couple is working on. The conversation suddenly ends and Marta is forced to go to the research facility to help her boyfriend. 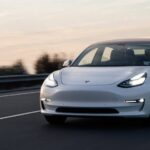 Tesla will activate the autonomous driving system in Europe very soon. When?

Once on the spot, the situation is completely out of control: the alarm signals are the only sounds emitted by the speaker of our monitor and there is no trace of life. In a race against time, the woman manages to reach the center of the plant, where she witnesses a paranormal event that catapults her in the ghost town of Hakavik, twenty years after the fall of the Wall. In this regard, know that the prologue of the adventure is of the highest quality. It takes the player totally disoriented and abandons him in a dystopian future in which the human race no longer exists, or almost, if we count the mysterious figure that will guide us in the three hours necessary to conclude the journey.

Soon the protagonist will come across aggressive machines led by ATLAS itself. The engine of the game is precisely its narrative component (not localized in Italian), extremely fascinating and capable of continually teasing the user: understanding what happened to ATLAS, Walter and the human race, will push us to continue in the game, hoping to find answers to all our questions. However satisfying and intricate, the plot of Industria leaves too many questions unanswered, mainly due to the brevity of the campaign, but in a game in which the narrative sector is so important, all of this is frankly paradoxical.

Between shootings and environmental puzzles

The gameplay of Industria presents a great mix between exploration and firefights, with the latter particularly successful indoors. In the first hour, the focus is on well-structured environmental puzzles, in which it will be of fundamental importance to interact with the environment. To make this first part of the adventure tachycardic, it will be the feeling of being at the total mercy of ATLAS: Marta will not have weapons but only with a torch and a pickaxe, will suffer high damage and will be able to collect a small number of healing vials. In the second part of the title, however, the map opens to free the protagonist of all those anxieties that before her oppressed her, transforming her into a real war machine. Submachine gun, shotgun or sniper rifle, also thanks to a more than sufficient quality of the shooting, will make the offensives of the few opponents vain, five in all, who will try to hinder our rescue mission. Attack patterns are predictable – four out of five enemies will just run against the scientist – and ammunition, which was initially in short supply, become easy to find. Thus we end up breaking that initial formula charged with tension that we find, fortunately, in some singular ones exploratory phases. Unfortunately, the absence of boss fights should also be noted, which could have given further lifeblood to the gameplay. The available imagery is immense and also for this reason we find that the absence of a major confrontation is a lack of a certain weight.

Despite the linearity that distinguishes Industria, in fact, the player is still left free to visit abandoned buildings and collect shotgun cartridges or documents. that reveal important fragments of lore. In these cramped rooms, the brightness is very low and, in a stage of perennial alert, our only salvation against possible ambushes are gun and torch.

From an aesthetic point of view, the work done by the small development team is remarkable. The general lighting is excellent and Hakavik – whose architecture is inspired by the cities of Berlin and Prague with an eye to the atmosphere of Half Life – exudes style from every pixel. Our Xbox Series X test was more than satisfactory: we never experienced frame rate drops, crashes or slowdowns of any kind. Finally, the melancholic soundtrack created by Lukas Zepf who is also a childhood friend of one of the founding members.

Industry therefore has a good debut for Bleakmill Games, a starting point for a sequel that seems to be already in the works. Steve Chapman and David Jungnickel’s goal of developing a story-driven first-person shooter has succeeded in part, precisely because the story stops without providing the answers that so much makes those who live it desire.

How to download all the data that Google has about you

Version Analyzed PlayStation 5: Industry is a shooter that focuses on its narrative component and offers the best in situations of pure survival, claustrophobic and perpetually outnumbered. With the arrival of more powerful weapons, the level of challenge undergoes a sharp decline and, although it offers several interesting ideas, the narrative plot fails to provide the answers to many of the questions that arose during the adventure.