Not only the Earth, but the other planets of the Solar System also have incredibly high peaks, let’s see what they are. 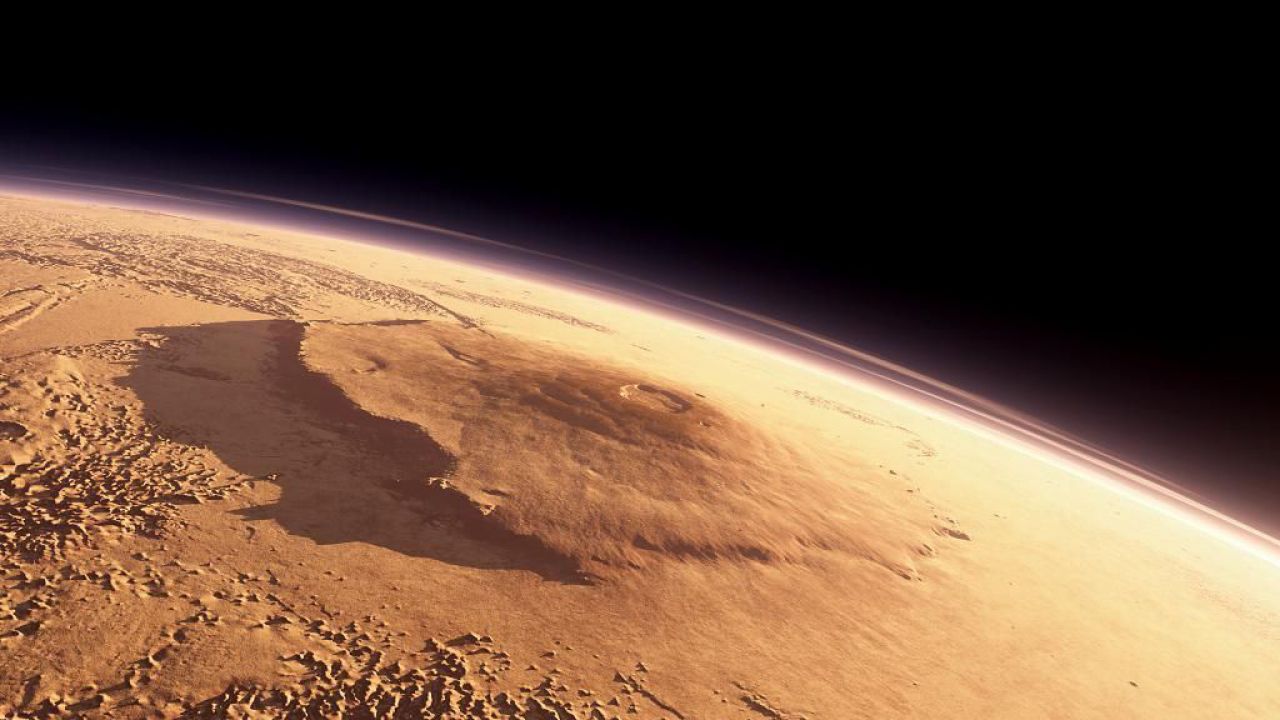 What is the highest peak on earth? One question that everyone will surely be able to answer is obviously Mount Everest, which has always been a popular destination for professional climbers.

However, one question that everyone will be able to answer more difficult is the following: “what is the highest peak of our Solar System?“. Forget the heights you are used to on our planet because the other worlds of our galactic neighbourhood have peaks that would make the most fearless of climbers pale. 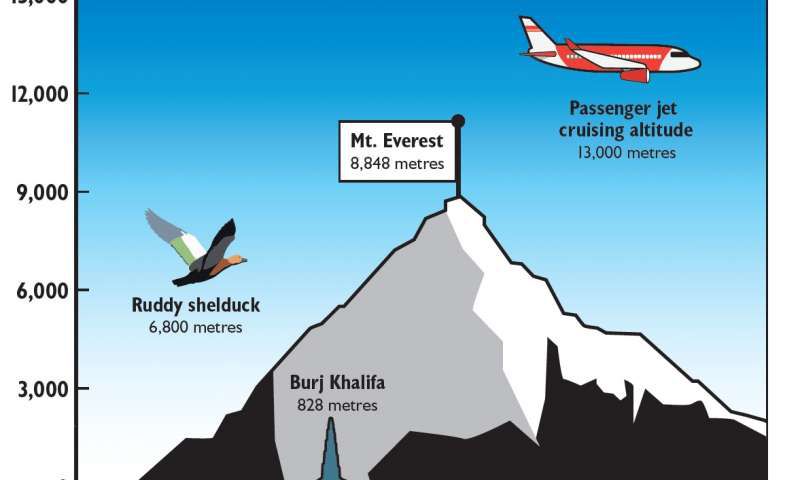 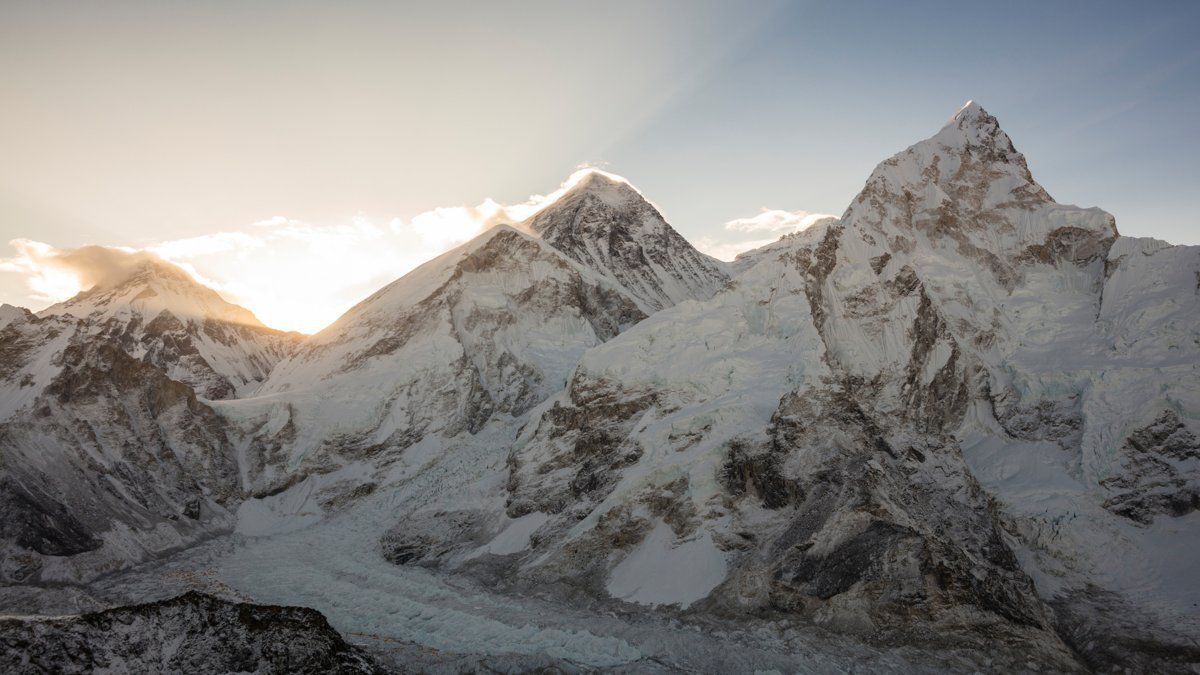 The famous Mount Everest is located on the lowest podium in the ranking, with its height of “only” 8,848 meters, 10 times higher than Burj Khalifa, the tallest skyscraper in the world (with a height of 828 meters). The mountain in question falls into the group of “eight thousand”, that is, the fourteen mountains of the Earth that exceed eight thousand meters above sea level. This mountain is every mountaineer’s dream and nightmare, a place where the wind can exceed 321 kilometres per hour and where it takes about 40 days to reach the top (it takes a few days for the body to get used to it altitude), without forgetting the minimum temperature, which can even reach -62C. 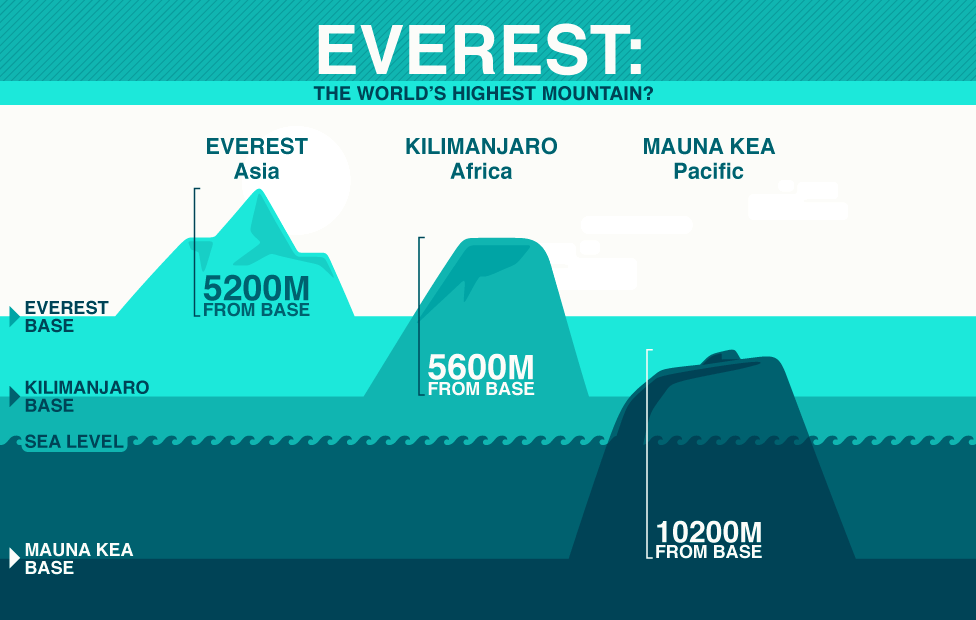 Surprise: Mount Everest is not the highest mountain on Earth. It is if we consider the sea level, but it is not the highest mountain if we measure it from the base to the summit. The primacy, in this case, lies with the Mauna Kea volcano located on Big Island, Hawaii. Although its height above sea level is “only” 4,207 meters, if measured considering its base which is almost 5,761 meters below sea level, overall the Mauna Kea rises to 9,968 m. Ben 1,120 m more than Everest.
Due to its ideal conditions, since it is almost always above the clouds, astronomical observatories have invaded the summit of the volcano since 1970. There are currently thirteen of them, and four of them are part of the largest telescopes on the planet. 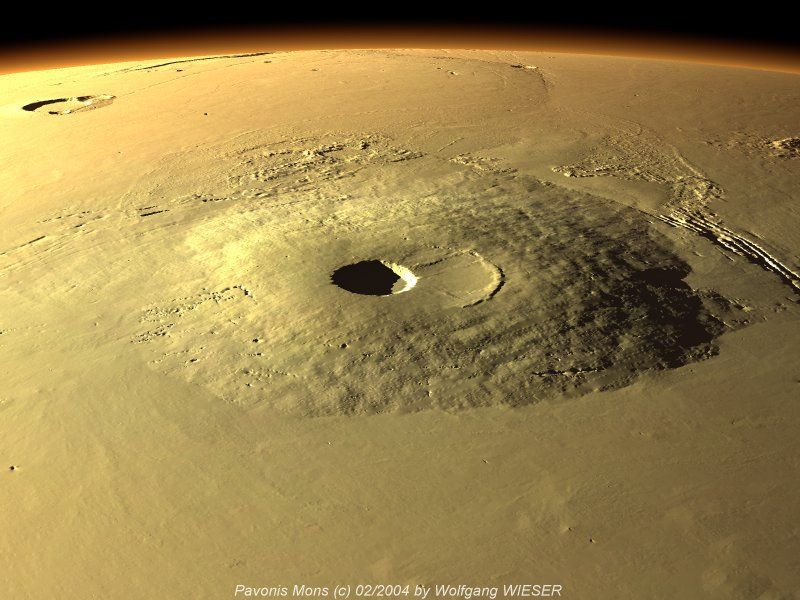 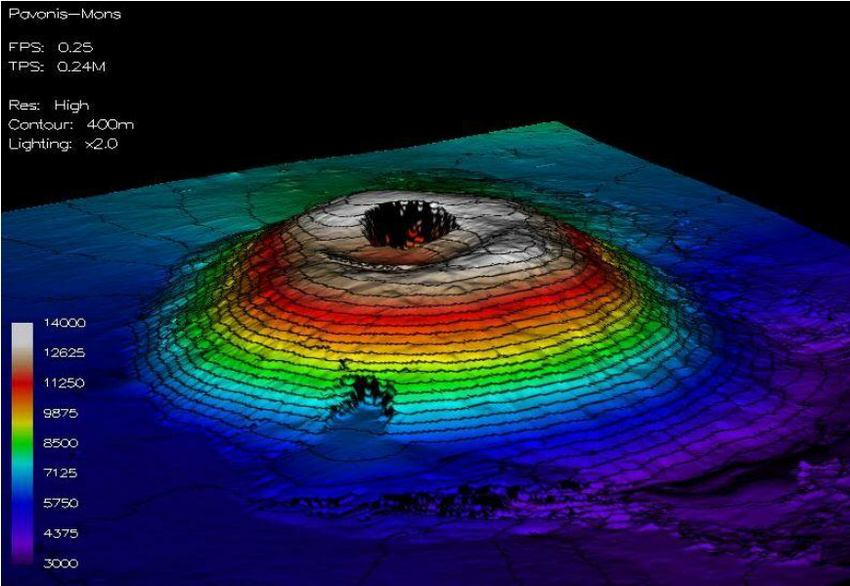 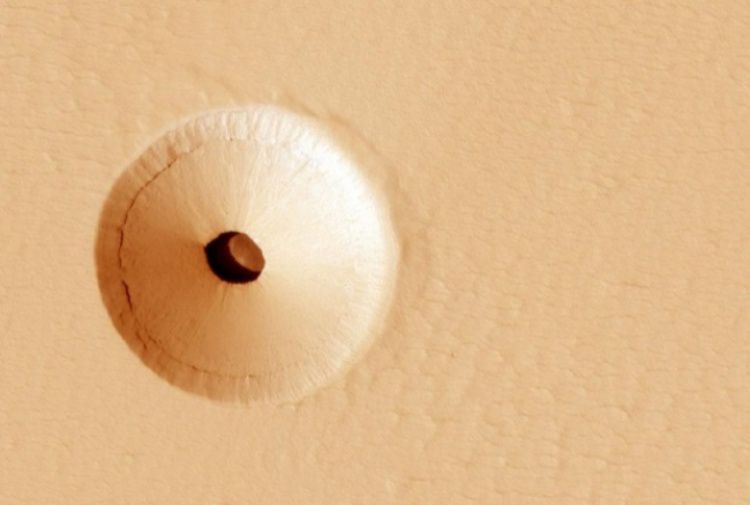 Pavonis Mons is a shield volcano located on the surface of the “cousin of the Earth”, Mars, in the equatorial region of Tharsis. It is located between the Ascraeus Mons (18 kilometres high) and the Asia Mons, together with the latter forming the volcanic complex of the Tharsis Montes.

His height? 14 kilometres. NASA recently shared a particular image, studied by a group of researchers who deals with the surveys carried out by the Context Camera, one of the cameras mounted on the Mars Reconnaissance Orbiter that orbits the Red Planet.
The team noticed the presence of a crater containing a very dark spot on the slopes of the volcano. A simple “skylight”, an opening of an underground cave. According to experts, the entrance has a diameter of about 35 meters and the complex was – most likely – formed by a series of lava flows. 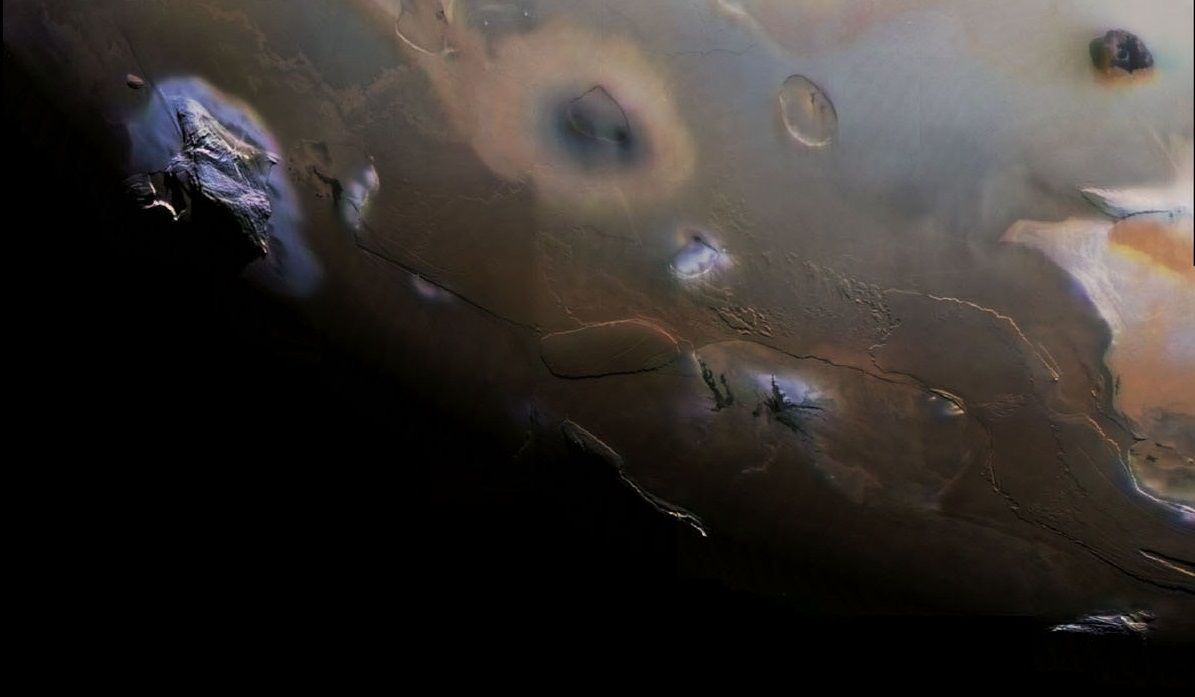 We temporarily leave Mars to go to Io, one of Jupiter’s moons which host about 300 active volcanoes on its surface. The Boösaule Montes is a geological structure of the satellite surface. Specifically, this structure consists of three peaks that rise above a plateau of 540 km in diameter located northeast of the active crater called Pelé.

The highest peak, Mount Boösaule south, is one of the highest elevations of the solar system with its 17,500 meters. The origin of the Boösaule Montes is due to the movement of the tectonic plates on the satellite. 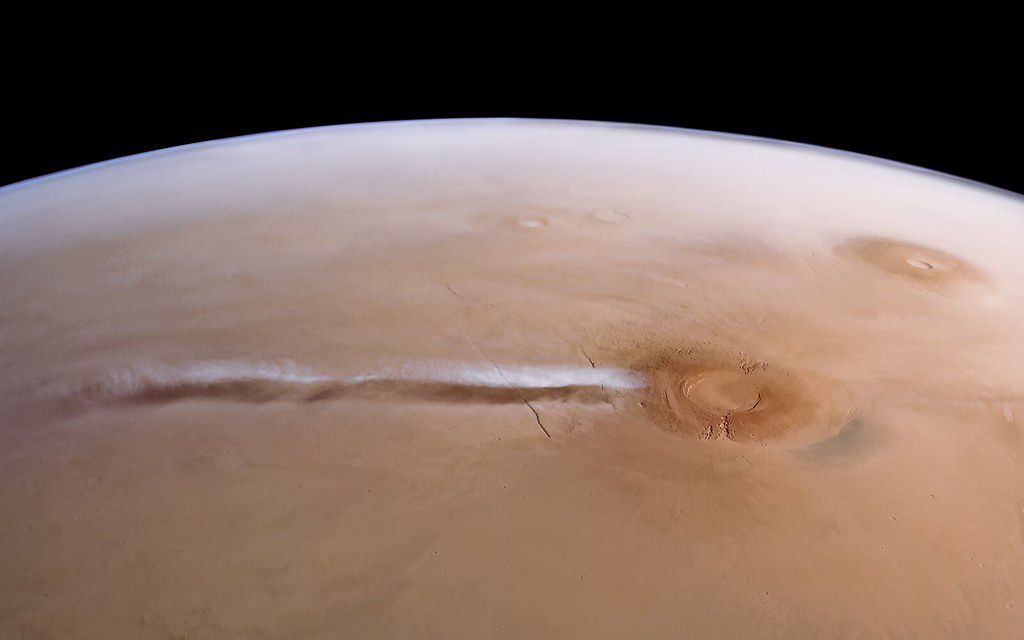 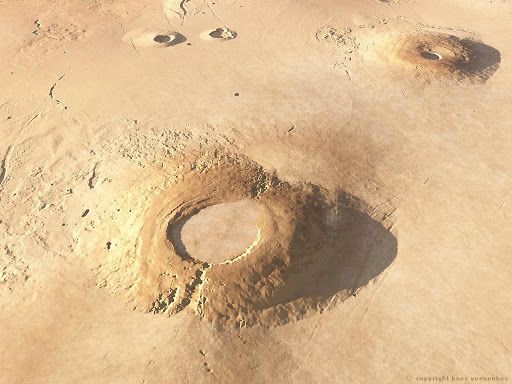 We understood it: Mars hosts peaks that make the entire Solar System pale, such as the Asia Mons, a volcano located on the surface of the Red Planet, in the equatorial region of Tharsis; it is the southernmost of the three volcanoes that make up the Tharsis Montes. His height? 19 kilometres, 22 times higher than Burj Khalifa and 2 and a half times Mount Everest.

About two years ago, a white plume was spotted from the top of this dormant volcano for 50 million years. Smoke? No, these are simply clouds that form when air rich in water vapour is pushed up along the sides of a mountain. At high altitudes, in fact, the lower temperature leads a fraction of the steam to condense forming clouds of ice crystals.

Mount Olympus is not the seat of the Greek gods, but the largest relief on the planet Mars and the entire solar system, with its over 25 kilometres high. It is a shield volcano similar to those of Hawaii, with an estimated age of 200 million years.
The surface covered by Olympus Mons is so large (comparable to the entire Italian surface) that a hypothetical observer on the surface of Mars would not be able to observe the profile of the volcano. 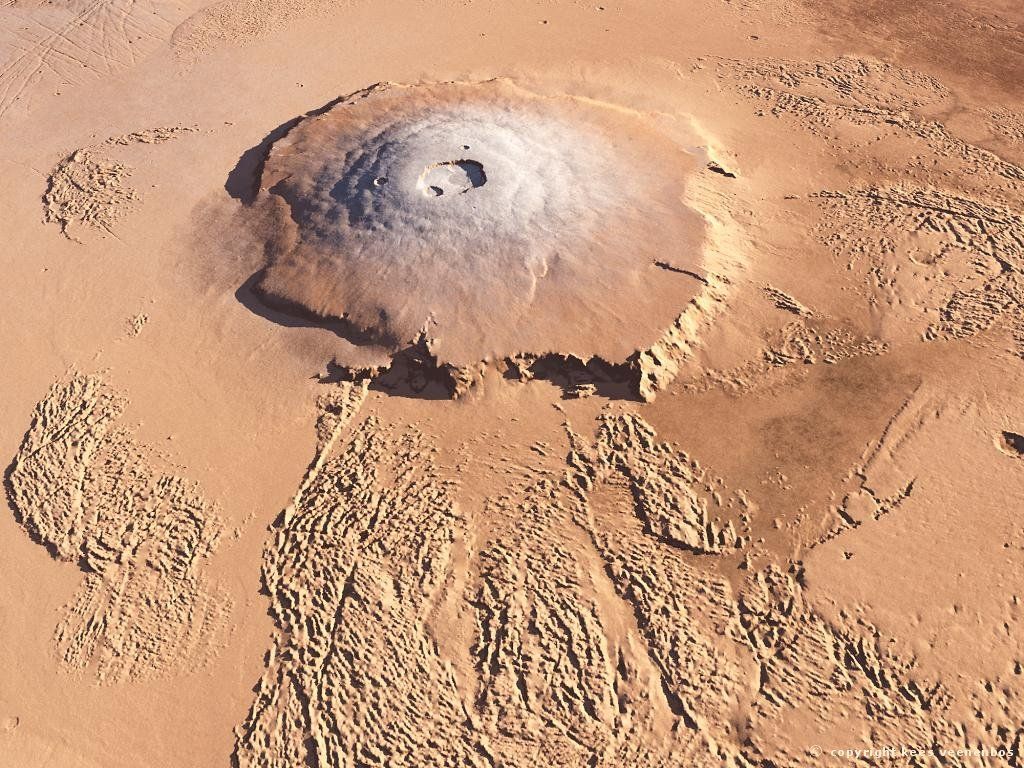 Similarly, being on the top of the mountain, the slope of the volcano would extend across the horizon and the viewer would not be able to appreciate it. The only way to fully observe the mountain is from space. The height of this frightening mountain is 30 times that of Burj Khalifa and more than two and a half times that of Mount Everest.

Mi 11 Lite NE, the not so small brother of the great Mi 11 range

Portal GO and Portal Plus, the new smart screens for Facebook

Portal GO and Portal Plus, the new smart screens for Facebook

How to put iOS 15 on your iPhone

How to change the fingerprint reader animation on your OnePlus