Summer is here, and people start to take out their Bluetooth speakers for parties with friends, for the pool, or even for when we go camping. In EuroXlivewe are also looking forward to all those plans, and this time we are going to wear something more stylish this summer with our loudspeaker. Or should I say lamp? Well, the truth is that the new IKEA has it all, and in this article we are going to tell you everything that the new VAPPEBY lamp offers us of the Swedish chain.

IKEA offers us a product that, in addition to creating an atmosphere with its light, will also be the soul of any party thanks to its built-in Bluetooth speaker. And it does everything through a very particular design. Under these lines we leave you with its technical specifications.

I promise you that when I started to take the lamp out of the box, I thought I had to assemble it in pieces, since a few screws rattled that made me doubt. But don’t worry, it was a false alarm, as it was the screws on its handle. If it’s about a loudspeaker-lamp with a built-in handle to facilitate its transport, something that is not even painted, since the speaker is not exactly light to say. 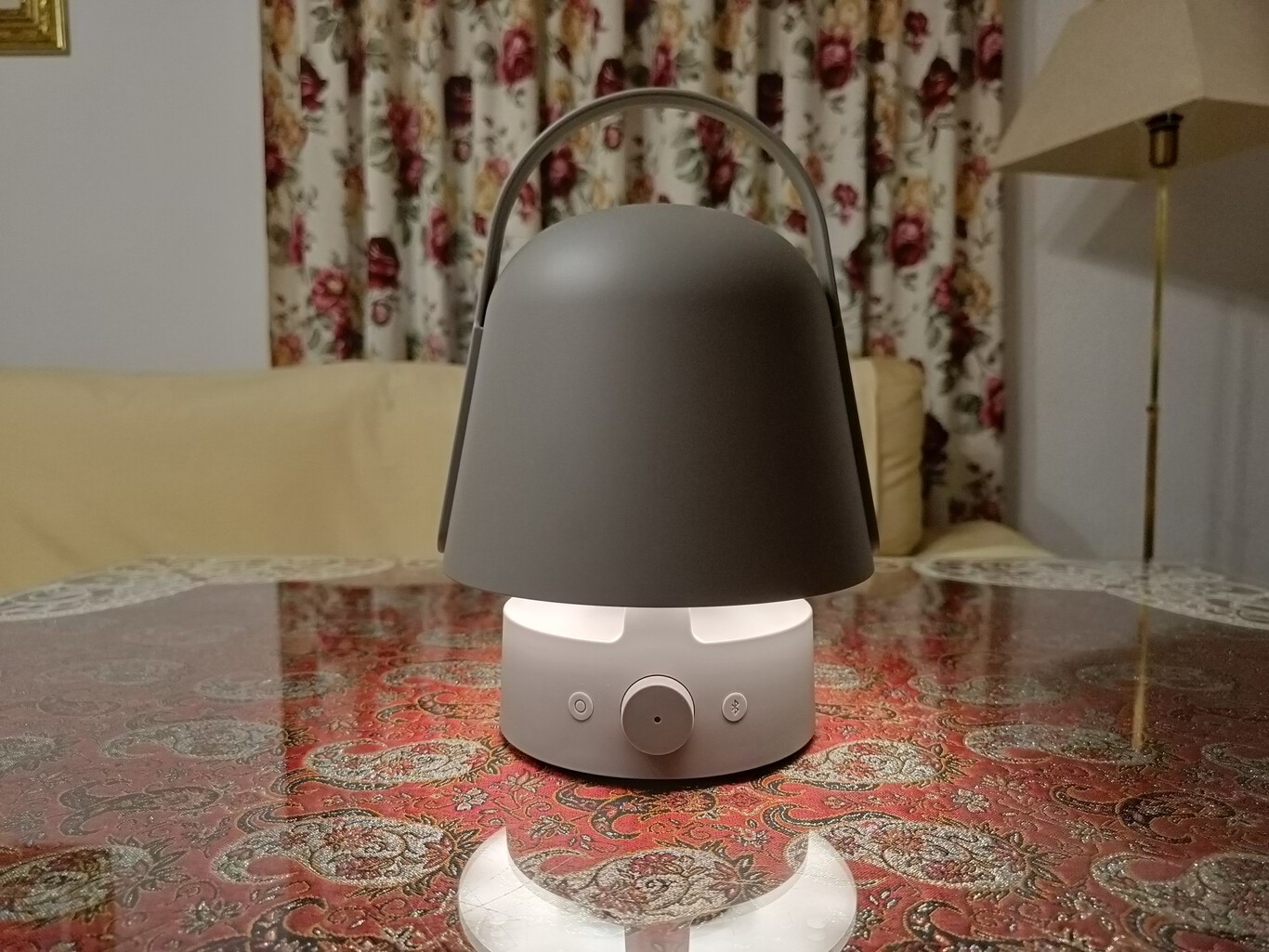 It is not a lamp to illuminate everything in its path, but a way to create some atmosphere while we play our favorite music.

I’m not going to lie to you, every time I see the silhouette of this lamp, I am reminded of Darth Vader or a Stormtrooper. Surely the design of it forms a certain disparity of opinions, I personally did not find it very attractive at first, but I ended up getting used to it, especially with the light on. This design has its explanation, since it has IP65 certification, which makes this lamp immune to rain and dust. Its lights are located right at the bottom of its ‘helmet’, and given the location of these lights, it is clearly not a lamp to illuminate everything in its path, but a way to create some atmosphere while we play our favorite music. .

The lamp It has two lighting intensities., and it is not possible to change color, so we will have to stay with a warm color temperature. In this sense, it is quite limited, since I think that the possibility of including RGB LEDs and offering more complete lighting has been wasted. It also does not have a dimmer that modifies the intensity. We only have a button on the back to turn off the light or turn it on in up to two intensities. 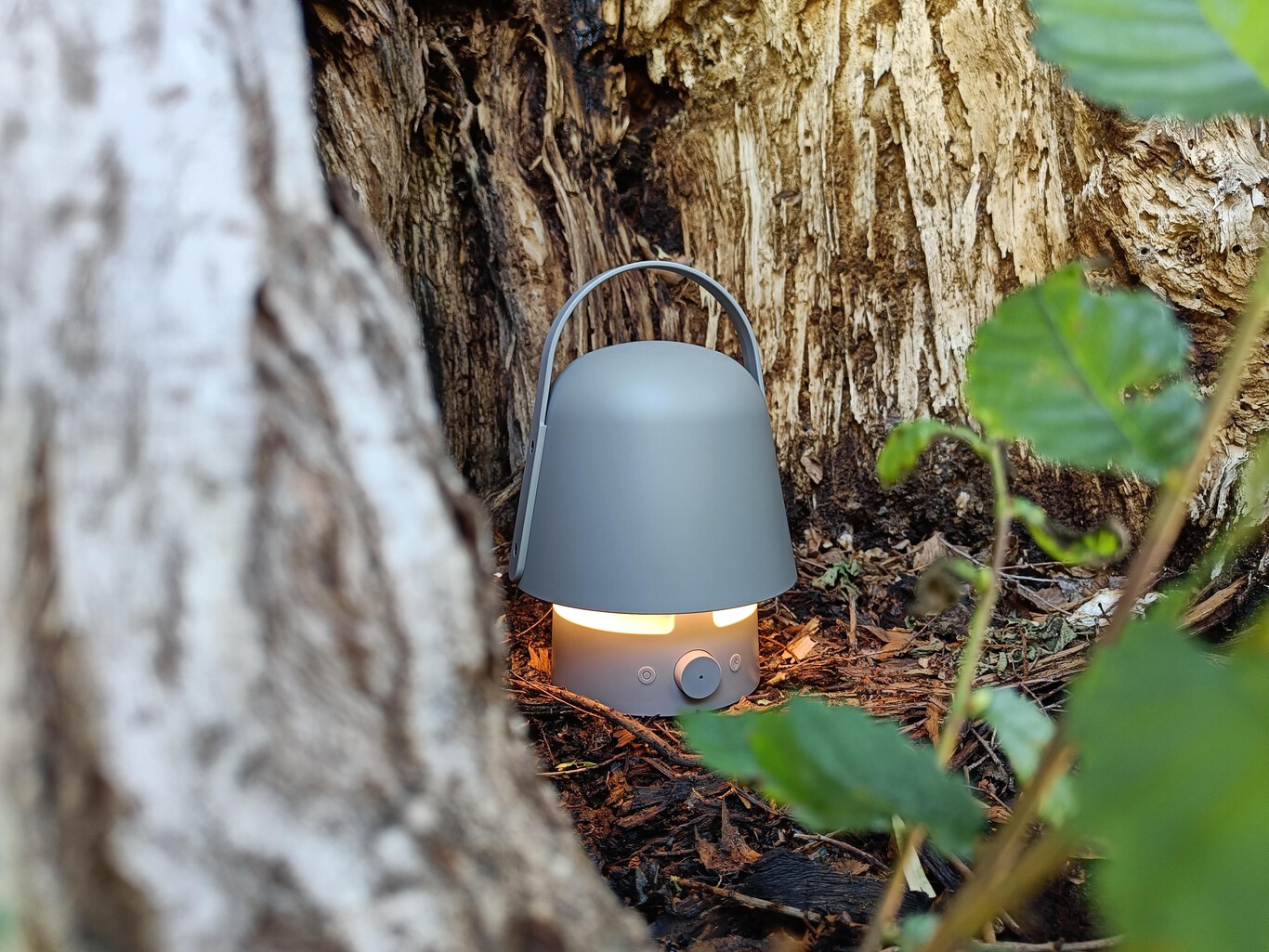 In addition to the light, the lamp also has other buttons dedicated to the speaker and Bluetooth connectivity. In the central part we have a multifunction wheel which is used to modify the volume, pause or continue playback, or to activate the music through the Spotify Tap function. On both sides of this button we have the Power button and another dedicated to connect the speaker to a device via Bluetooth. 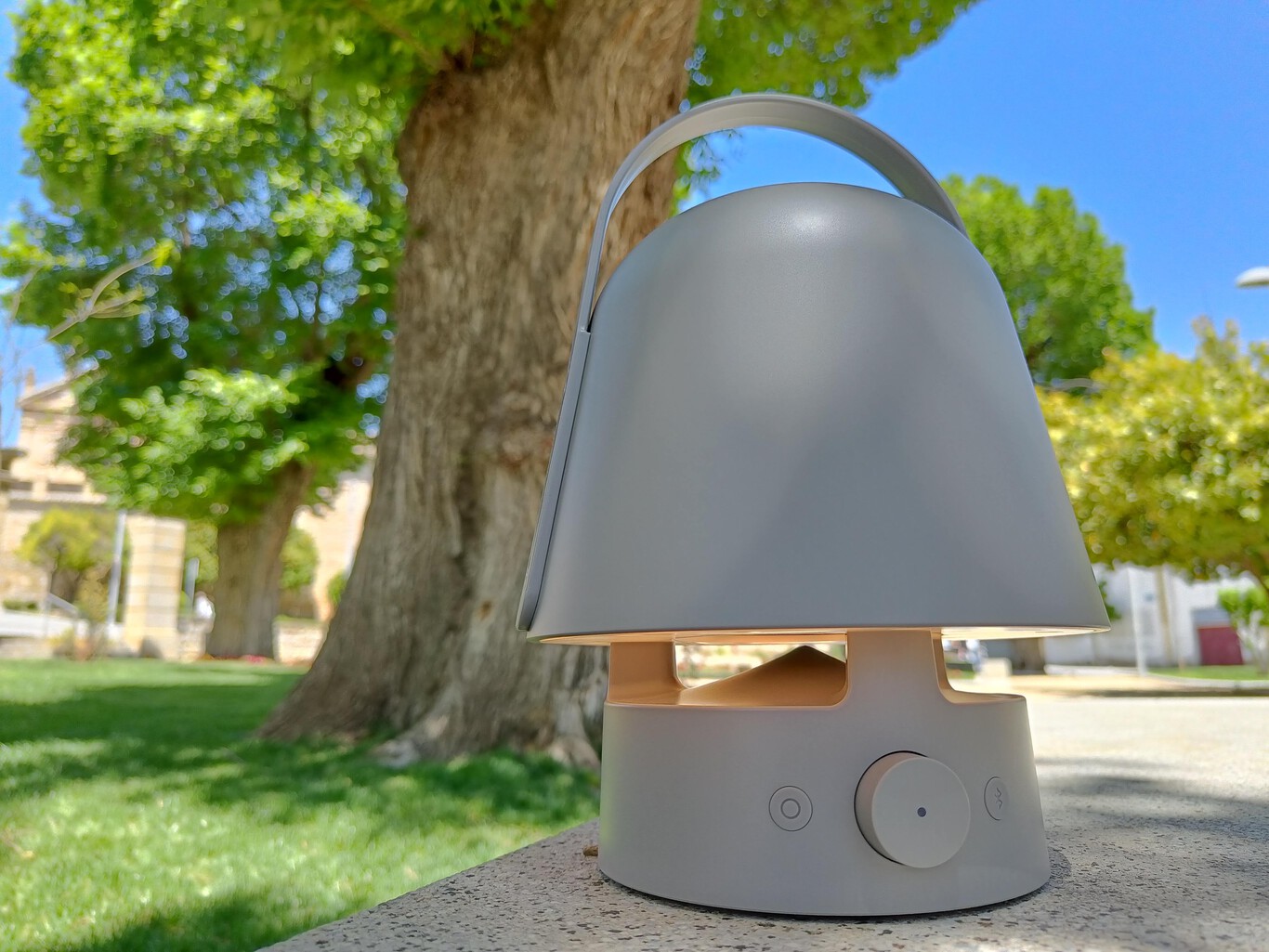 If we look at the central part of the speaker, just below the lights, we find a kind of cone. This cone serves to redirect the sound outwards, since the speaker is located just inside the helmet. Also, if we want to put the handle on it, just place it through the screws that we must insert on both sides of the speaker. The device also has a non-slip platform on its base to facilitate grip on surfaces. 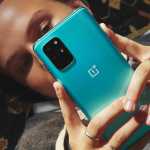 OnePlus 8T: the big brother of the OnePlus 8 arrives with a 120Hz screen and ultra-fast charging

Spotify Tap, we don’t worry about the phone

As we have already mentioned, the speaker has Bluetooth to connect our mobile phone and play music. Nevertheless, its main attraction is the addition of Spotify Tap, a system in which with the push of a button, the speaker will start playing music through the streaming service. This means that, once connected to our mobile device, we will no longer have to interact with it to listen to music through this speaker, since the physical button on it will do it for us. 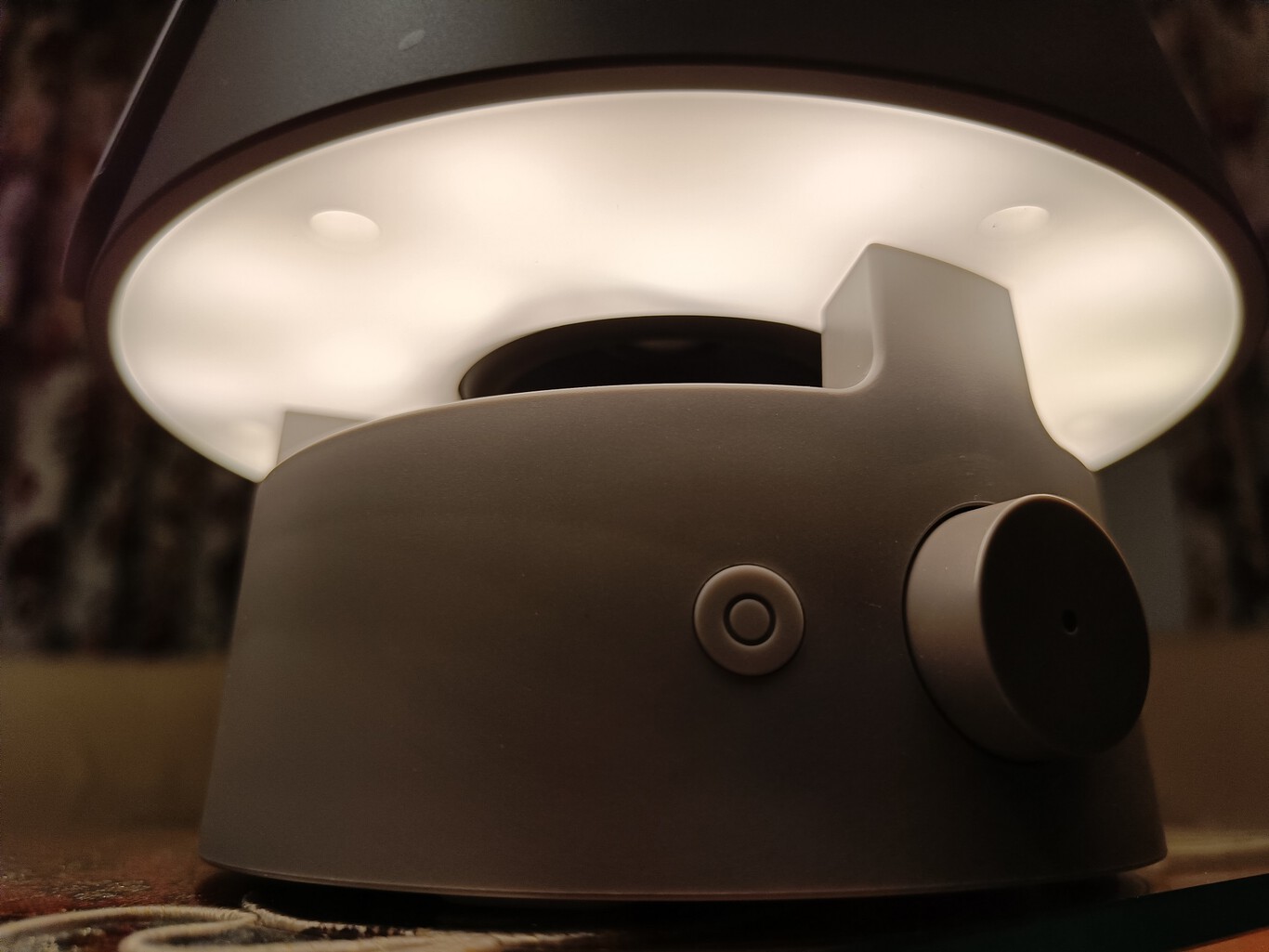 Spotify Tap plays music based on our tastes. However, if we don’t like the song, pressing again will play a different song. Without a doubt, it is a great addition for those moments in which we simply want to have something in the background and not worry about the phone. Of course, some mobile devices may require prior configuration from the Spotify app.

As for physical ports, the lamp only has a USB-C port to load it. This is located in the base itself, somewhat hidden, but done on purpose to protect the port from the outside and facilitate the entry of the cable through its guides.

The arrangement of its speaker and the central cone makes it produce a pretty decent 360 degree sound for the price at which it is for sale. IKEA has chosen to increase the low and high frequencies in its VAPEBBY lamp. This partly masks its somewhat flat and lacking detail sound, but overall it works quite well in this regard. 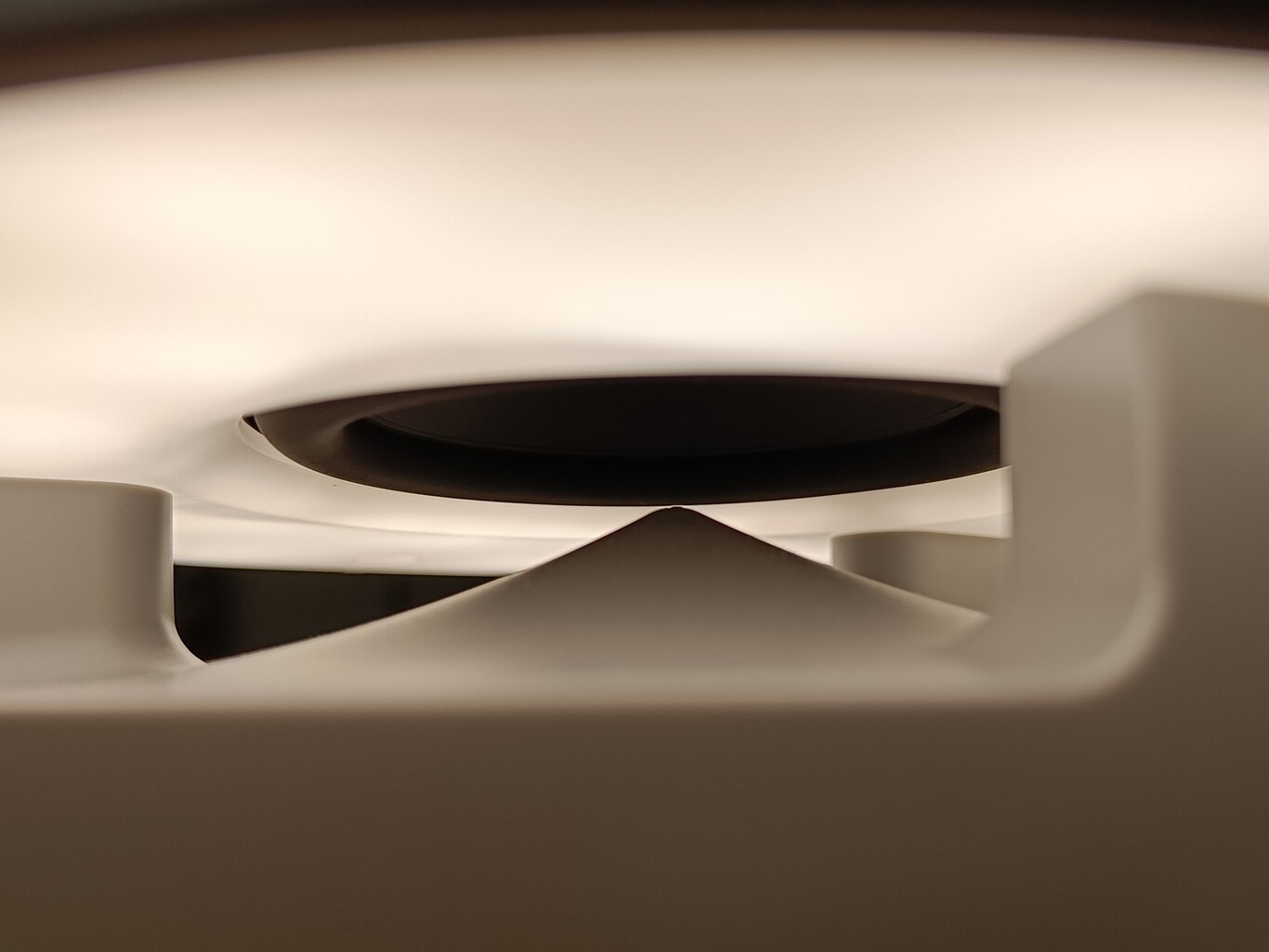 During the test we have played all kinds of genres, and although it performs its function as expected, there is some inconsistency when it comes to playing depending on which songs. In themes with more balanced frequencies, sound may be unclearalthough it captures a fairly solid bass and in high frequencies it does not perform badly either.

Let us remember that the IKEA VAPPEBY not intended for professional soundbut it stands out for its versatility between a portable lamp and a Bluetooth speaker, being a way to create the perfect atmosphere while we are chatting with our friends in the garden, or enjoying a magnificent summer night with the dim light that this lamp radiates . 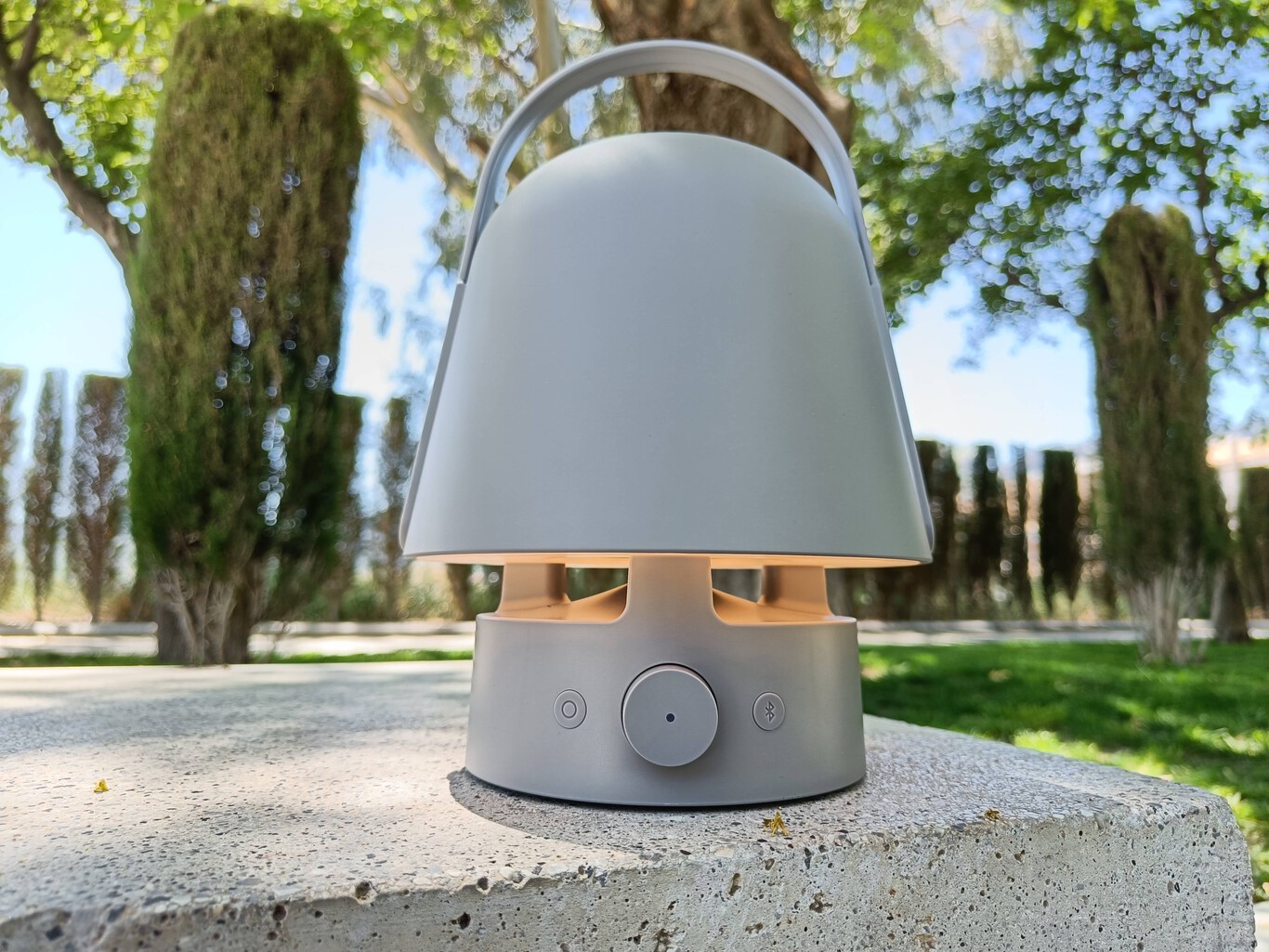 IKEA has done a great job with this speaker in terms of autonomy. And it is that the product can last us up to approximately 13 hours with light intensity at 50%. In our tests we have had a pleasant experience with the speaker in this regard, since depending on the use we can spend several days without needing to charge it.

The lamp has an internal 3,300 mAh battery, more than enough capacity for everyday use. The only negative point in this regard is that the current transformer is not included, only the charging cable.

The VAPPEBY loudspeaker lamp is a product that will create the best atmosphere for our partiesboth at home and outdoors, being in the latter case where its benefits are most used.

Separately, its features are not too surprising, but the fact that it has a lamp, a Bluetooth speaker, 360 sound, Spotify Tap, and even rain resistance in just one product, make it a more than convenient device for those occasions when those who want to create the perfect atmosphere. While the sound quality isn’t masterful, it works as expected.

The device has been released for testing by IKEA. Can inquire our policy of relationships with enterprises.