It does not have the precision of the most advanced AIs, but DALL-E Mini is marking a before and after. It is the first time that everyone can freely access an artificial intelligence image generator of this caliber. Simply access this link, write a short description in English and voila. But It’s not just the fact that it’s open source what makes the DALL-E Mini so interesting.

Neither are the results. We will not fool ourselves, the images generated by DALL-E Mini have nothing to do with those of DALL-E 2, much more impressive and realistic. Even so, the texts we write are understood most of the time. This open AI has the problem that the “remix” work is not as perfected and in fact most of the time it ends up disfiguring the image, with a result so bizarre that it is becoming more and more characteristic. Almost as if it were his own style.

In search of the best ‘prompt’

With these generators the word ‘prompt’ has become popular, whose translation would be ‘suggestion’ or ‘inspiration’. It is nothing other than the text that we give to these AIs so that they generate an image from it. From DALL-E Mini we have seen that Numerous accounts have emerged on social networks where they publish some creations performed by this AI.

An example of this is the Twitter account of Weird Dall-E Generations, where they publish some of the results. Examples? Almost as many as the imagination reaches. Here we see for example Mark Zuckerberg as a ventriloquist.

It is yet another way. If tweeters or youtubers are called content creators, with AI a new style of creation is being formed: prompt creators. Instead of coming up with videos, witty comments, or original photos, it is also a skill to find the most original and striking prompt. 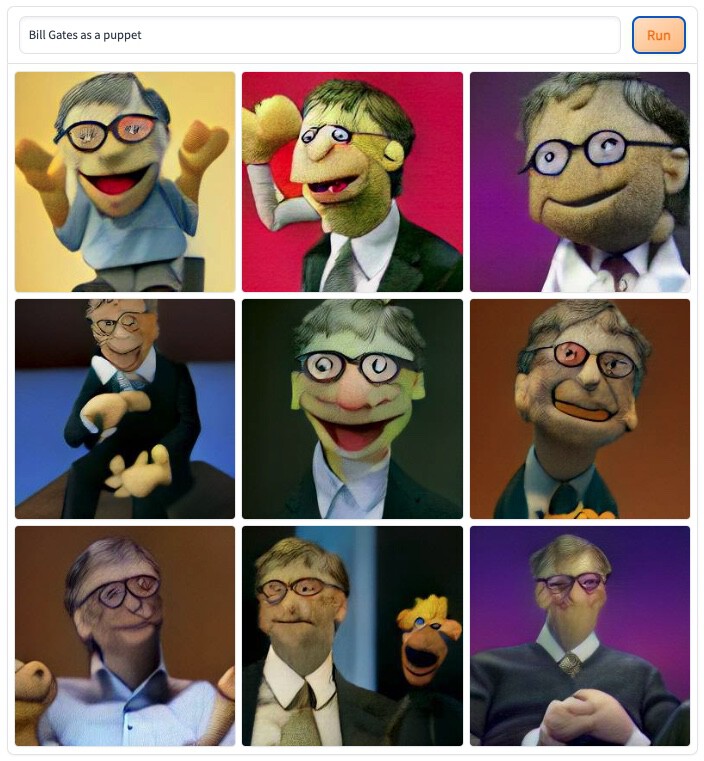 In my case, some of the first ideas to try DALL-E Mini was to go for the technology classics. In the previous image we have Bill Gates as if he were a puppet and in the cover image we have Steve Jobs eating an apple, although he serves any fruit.

The funniest thing is that DALL-E allows you to draw someone with any drawing stylebe it as a comic, in the Dalí style or as if it were painted by van Gogh.

You can imagine all the combinations that arise as a result of this. The internet is abuzz with images generated with the DALL-E Mini and this is good news. Not only because we have another tool available to create content, but because DALL-E Mini is helping us get used to “talking” to AIs in a creative way.

In the few weeks that it has been available, DALL-E Mini has achieved a virality and a level of use that other artificial intelligence applications could not even dream of.

But back to Steve Jobs and Bill Gates. How is it possible that DALL-E Mini is having more pull on social networks than DALL-E 2, when the latter is much more powerful? Being free is not the only reason. And then, with that drawing of Steve Jobs and the apple, that’s where it became clear to me: the charisma of famous people. DALL-E Mini allows to create images from famous people, when in DALL-E 2 it is prohibited.

We have to see DALL-E Mini with an open and free AI, where they indicate that some results can be hurtful but there is no express block. On the other hand, DALL-E 2, being by guests, has a stricter use policy and therefore the users who can use it have not been encouraged to apply it with real people. To prevent them from taking away access.

Here’s what the DALL-E 2 usage policy says about using AI with people:

Respect the rights of others: Users are asked to respect the rights of others and, in particular, are asked to do not upload images of people without their consent (including public figures), or images over which they do not have the appropriate usage rights. People who discover that their images have been used without their consent can report the violation to the OpenAI support team ([email protected]) as described in the content policy. Consent issues are complex and are discussed in more detail in the subsections on Consent.

DALL-E 2 is powerful enough that the results of its images can cause harm to those involved. On the contrary, it seems that the DALL-E Mini still fits that social media frame of mind. Something similar to what many users could do with Photoshop in a short time.

In the case of DALL-E Mini we are living a kind of test of how AI can affect the creation of quick images. A small experiment to see what kind of uses are being used. While DALL-E 2 is being used mainly from an almost artistic component, the free AI available to everyone is already being used for what we do best: have fun with technology.

Wish I was there pic.twitter.com/0lXURlzM7g

In Xataka | DALLE-2 has been surpassed: this is IMAGE, Google’s new AI to create ultra-realistic images

A free tool to edit and convert images to different formats