Huawei Matebook 14 (2020), analysis: more than 10 hours of autonomy for an ideal team to study or work 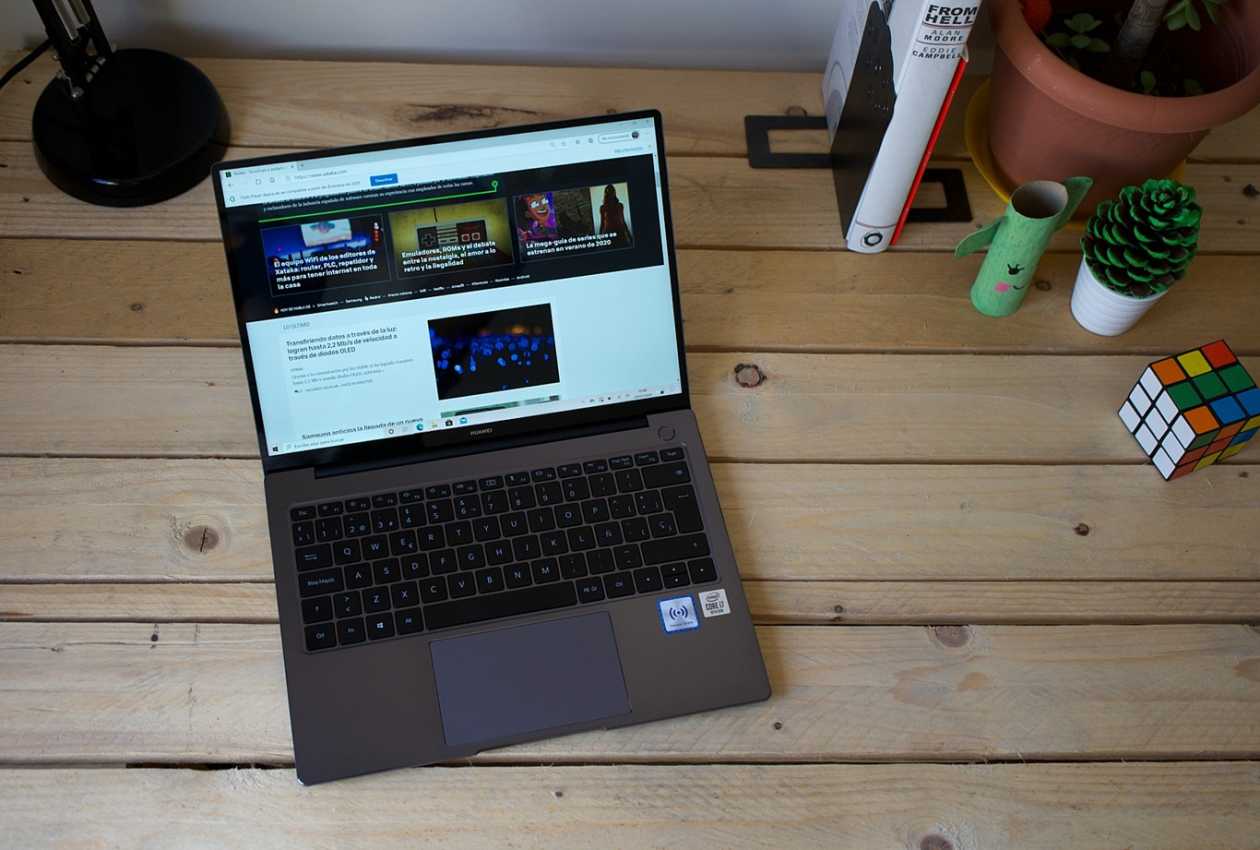 The entry of Asian manufacturers that we associate directly with smartphones to the market of laptops It has been striking and forceful. Xiaomi or Huawei are two clear examples that year after year adds more and more models to there for now short catalogue.

Of the most solid Asian brands in this sector, we undoubtedly have Huawei, which with the new Huawei Matebook 14 (2020) It completes a tempting offer due to its finish and good features, as well as extras such as Huawei, Share that reward loyalty to its ecosystem. At EuroXlivewe have already tested it.

Huawei’s new model has been updated with new tenth-generation Intel processors, more graphics power, and a larger battery, as well as serial capacity of the SSD.

The new Huawei Matebook 14 (2020) maintains the design idea of ​​the company’s models with a 4: 3 screen format. They are teams very compact for its diagonal thanks to quite small frames (screen-to-body ratio of 90%).

The design is understated but elegant, with no visible cooling elements or speaker grilles left at the bottom. There are also rubber elements along the entire length of the equipment to raise it slightly. The design is almost straight, with a slight reduction in thickness at the front.

Huawei adjusts the level of finish very well to the price of the equipment, with a body of aluminium alloy in a single colour (An interesting Space Gray) that leaves us an exquisite touch due to the smoothness of its lines, with quality and a feeling of robustness. That feeling of robustness is due in part to the weight, which is 1.5 kg. It is not among the especially light equipment on the market. 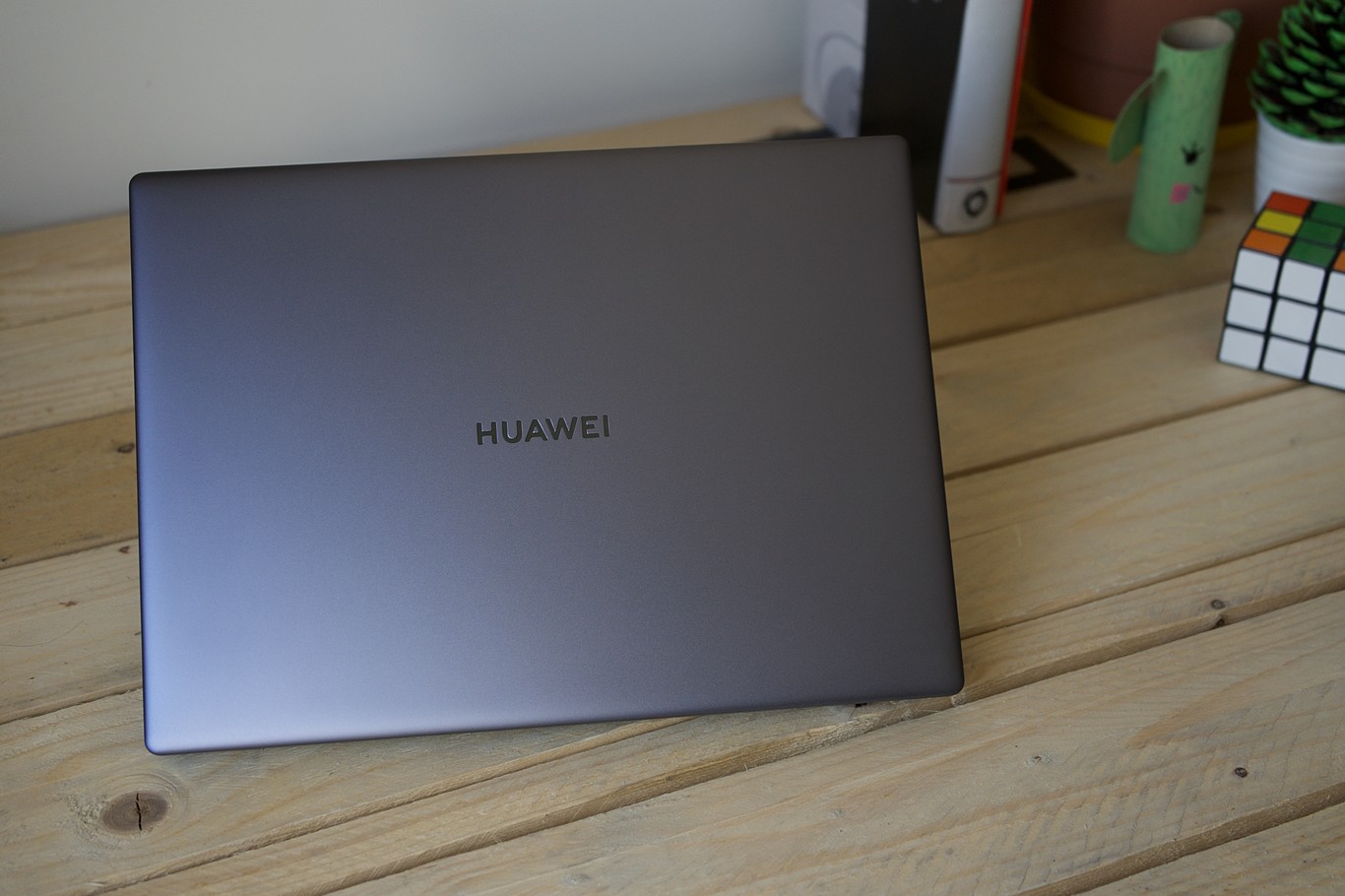 At the level of connectivity, this Huawei Matebook 14 (2020) tries to contribute a little of everything. On the left side, we have a full HDMI port along with the 3.5mm headphone port and a USB-C port that supports DisplayPort and charging. It is the only USB-C that we have in the laptop, so a hub will be quite practical. On the other side are the remaining two USB ports, both USB-A (one 2.0 and the other 3.0). 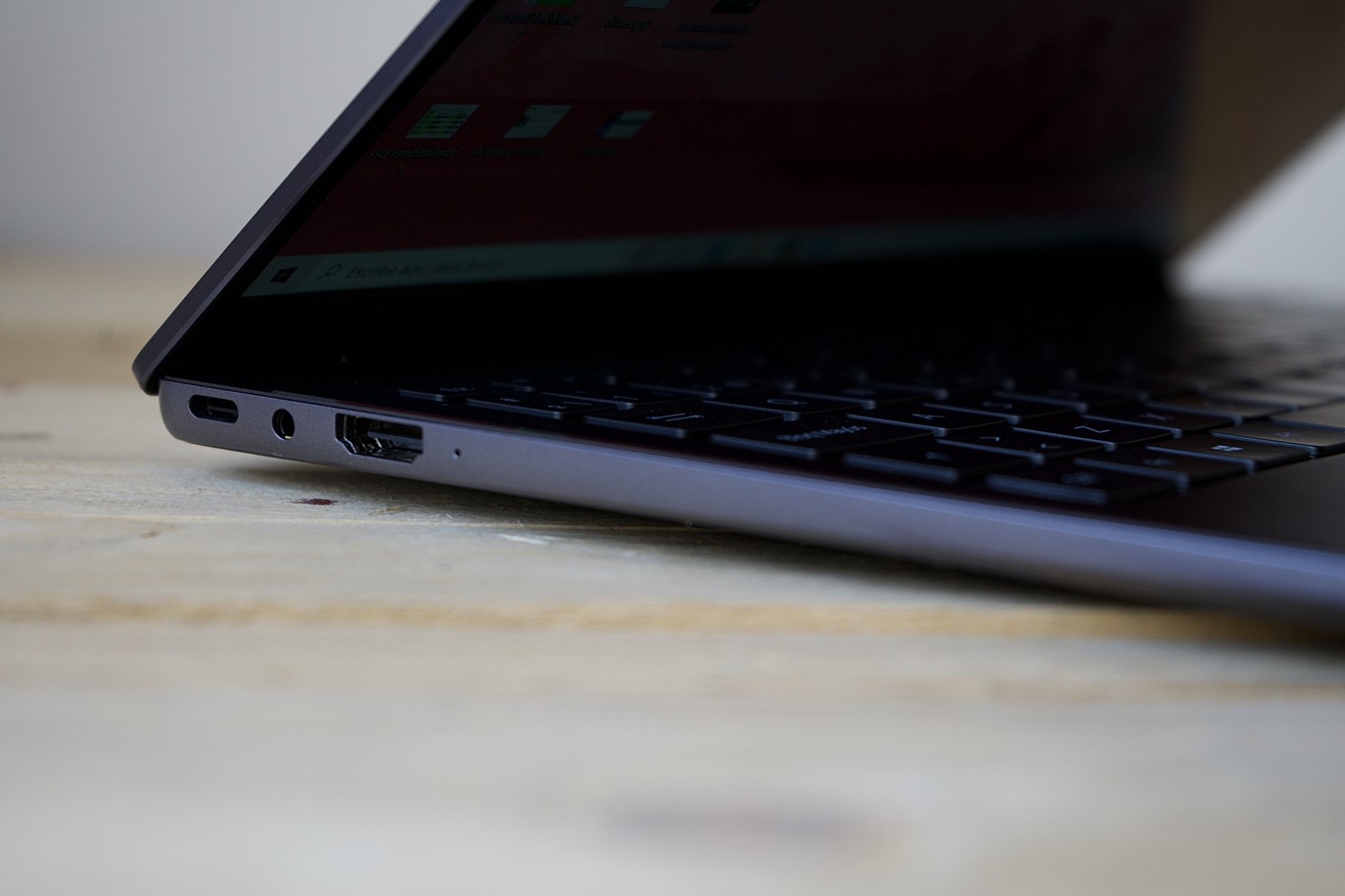 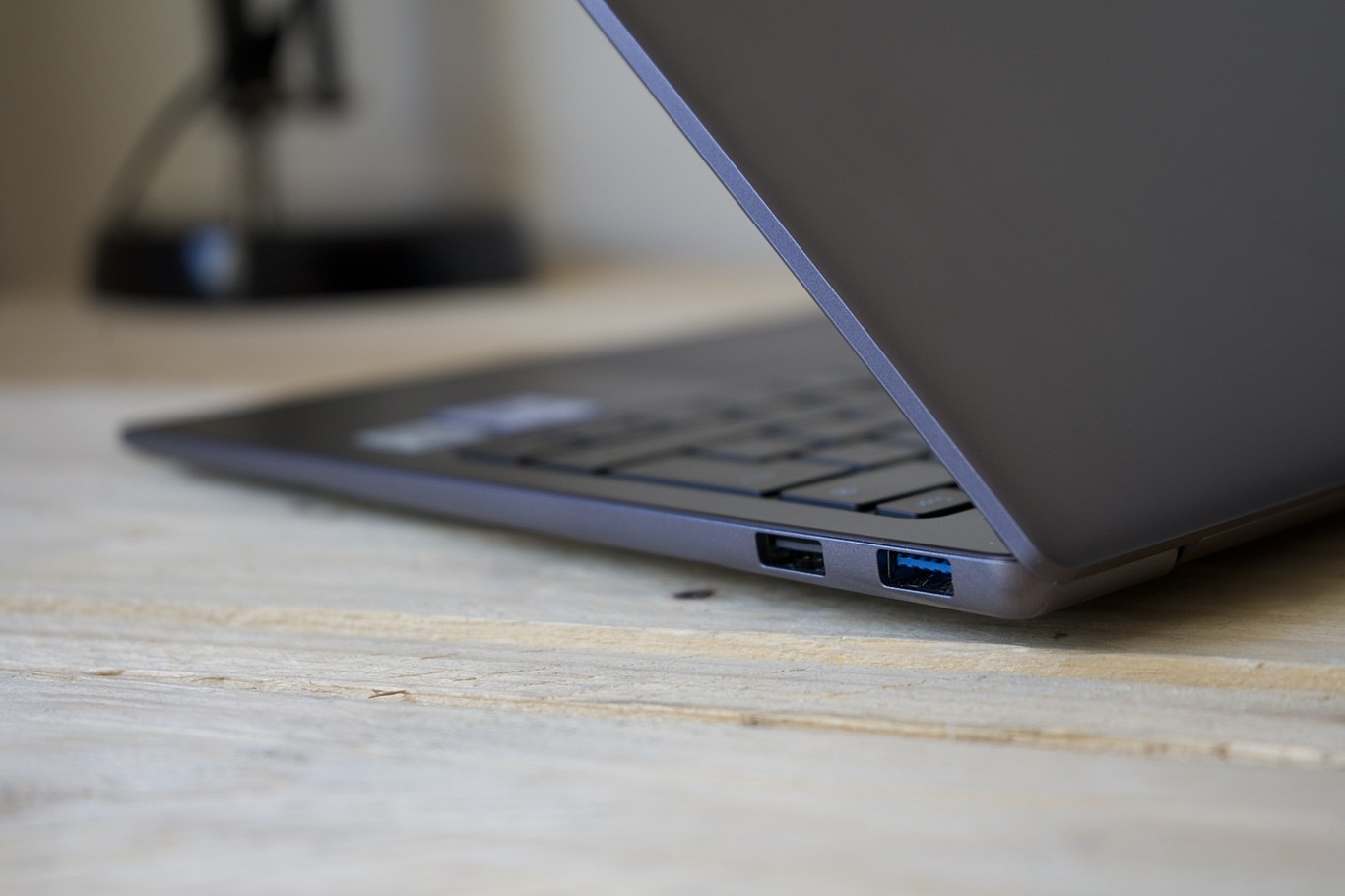 Another important element of this Huawei Matebook 14 is the fingerprint reader, which is integrated into the power button. Its operation is correct and fast. 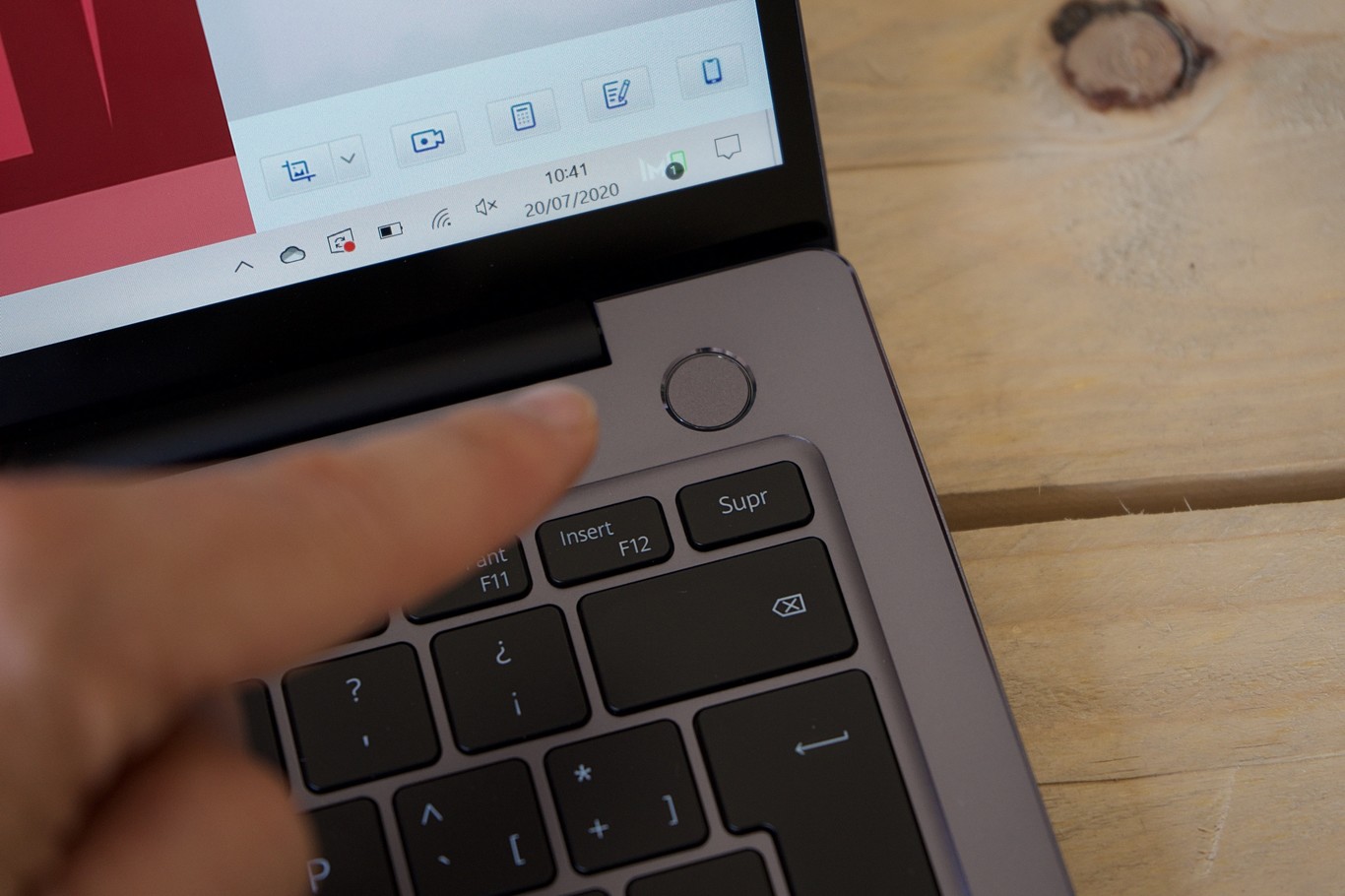 As its name indicates, the Huawei Matebook 14 (2020) is a laptop with a diagonal screen of 14 inches. As with the 13-inch model, one feature that I really like about this laptop is the native 4: 3 format of its screen, contrasting with the 16: 9 of the Matebook D models. There are few teams that maintain this ratio on screens, but for eminently working teams, it is a format that I prefer to the panoramic one. A matter of taste.

The screen of the Huawei Matebook 14 is touch, something surprising in a model that is not convertible

The panel of the Matebook 14 is IPS, with 100% coverage of the sRGB colour space. Contrast 1000: 1 and 300 nit brightness they are standard figures in this range of equipment.

The experience beyond the figures is very good, with sufficient clarity for continued work (2160×1440 pixels that give us 185 dpi), great control of reflections and the addition of having a blue light reduction mode. I also liked the opening margin for the screen that gives us the hinge. 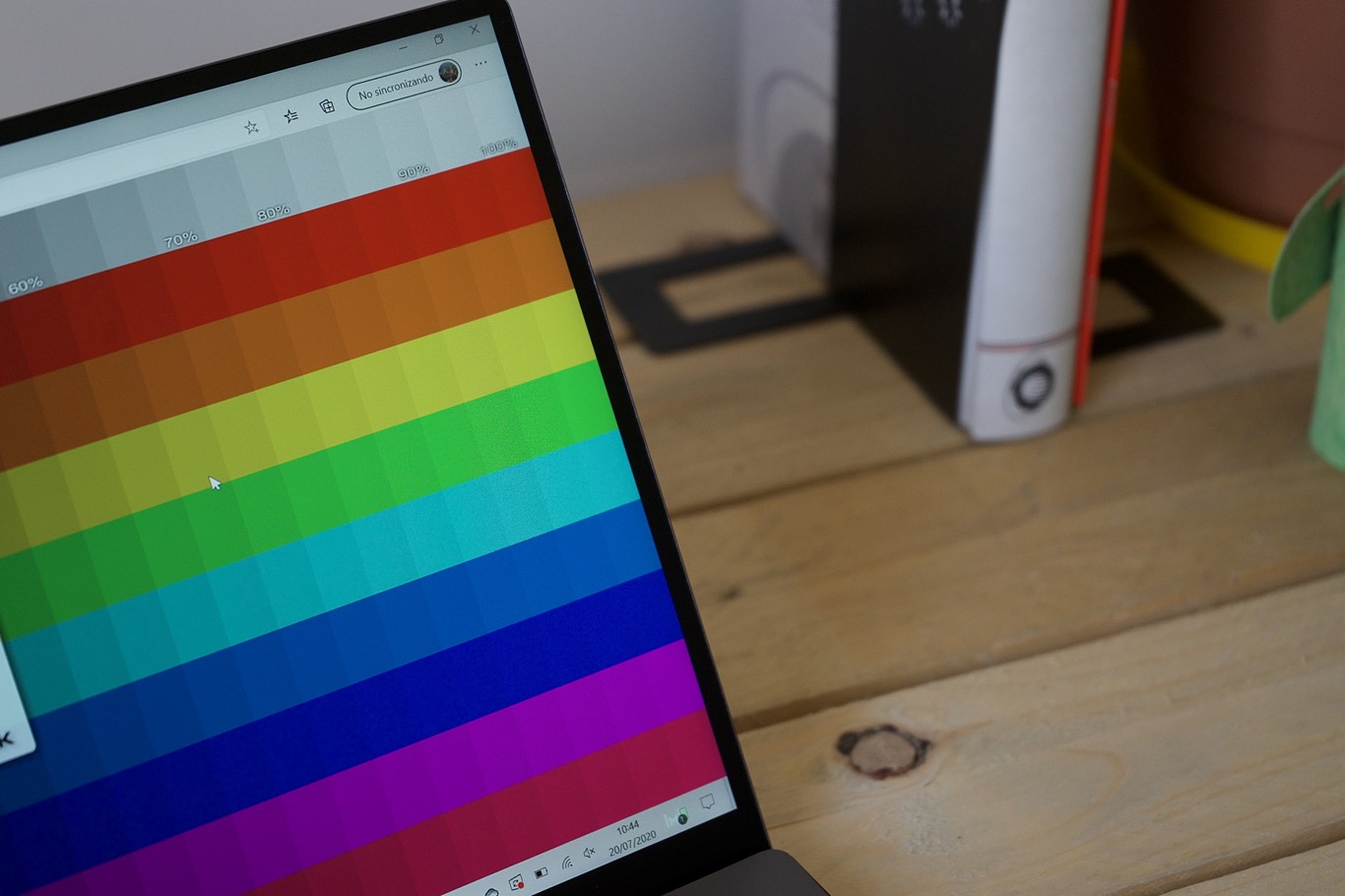 The surprise with the screen of the Huawei Matebook 14 (2020) is the inclusion of 10-point multi-touch technology. Without being a convertible model, its practicality is quite limited despite the fact that gestures (zoom or screenshots with three fingers) are performed very reliably. Although it is the reference model and that we have analyzed, there is a version with a non-touch panel but its availability depends on each market. 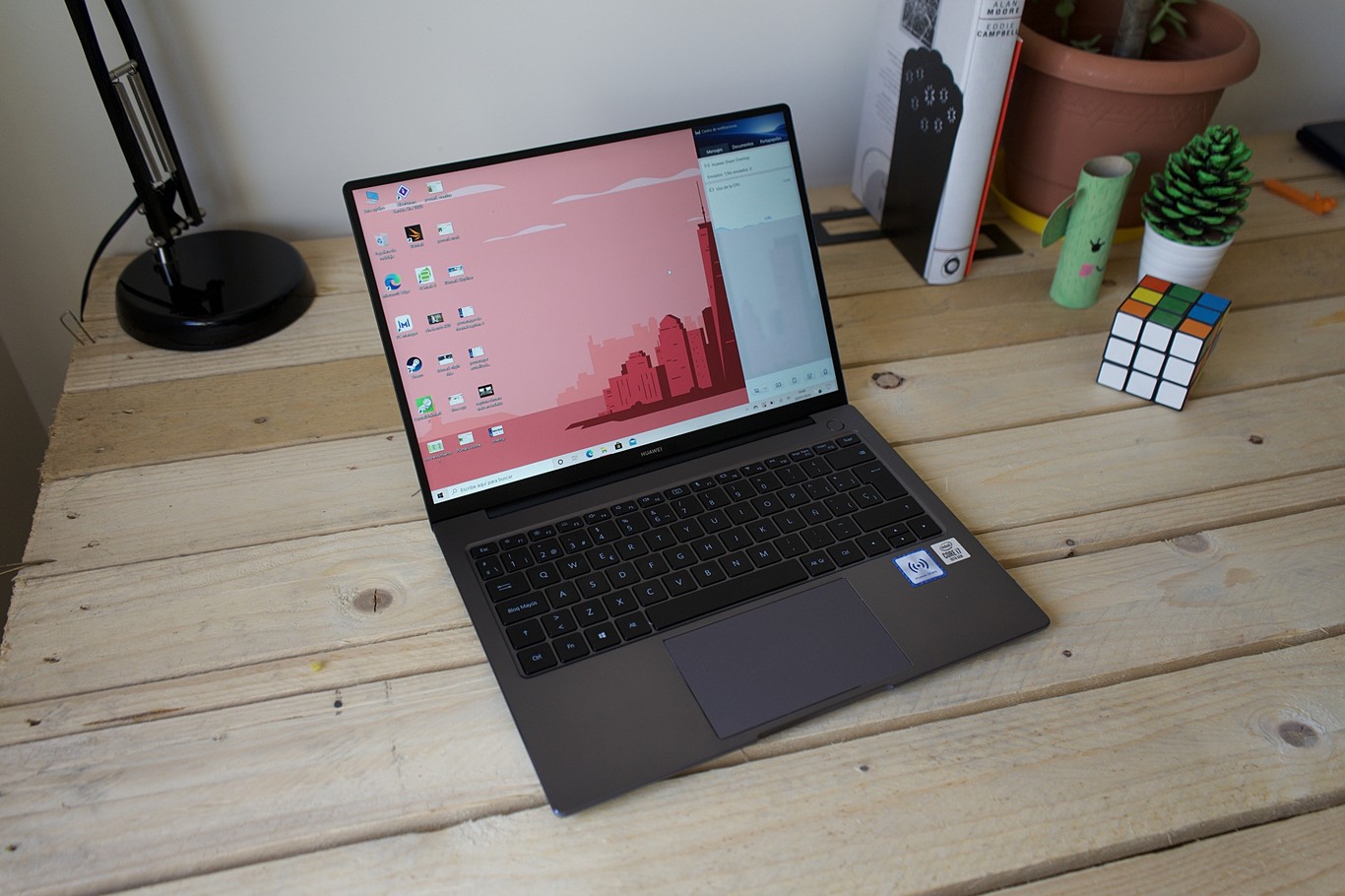 Taking advantage of the space so that the screen occupies as much as possible does not leave space for the placement of the webcam in the usual place. Or at least with a privacy system that Huawei wanted to put in at all costs.

The chosen system is not new, but it seems to be a bad idea. The webcam is a retractable type, a great decision, but it’s been placed on the keyboard, with a dedicated key in the row of function keys. 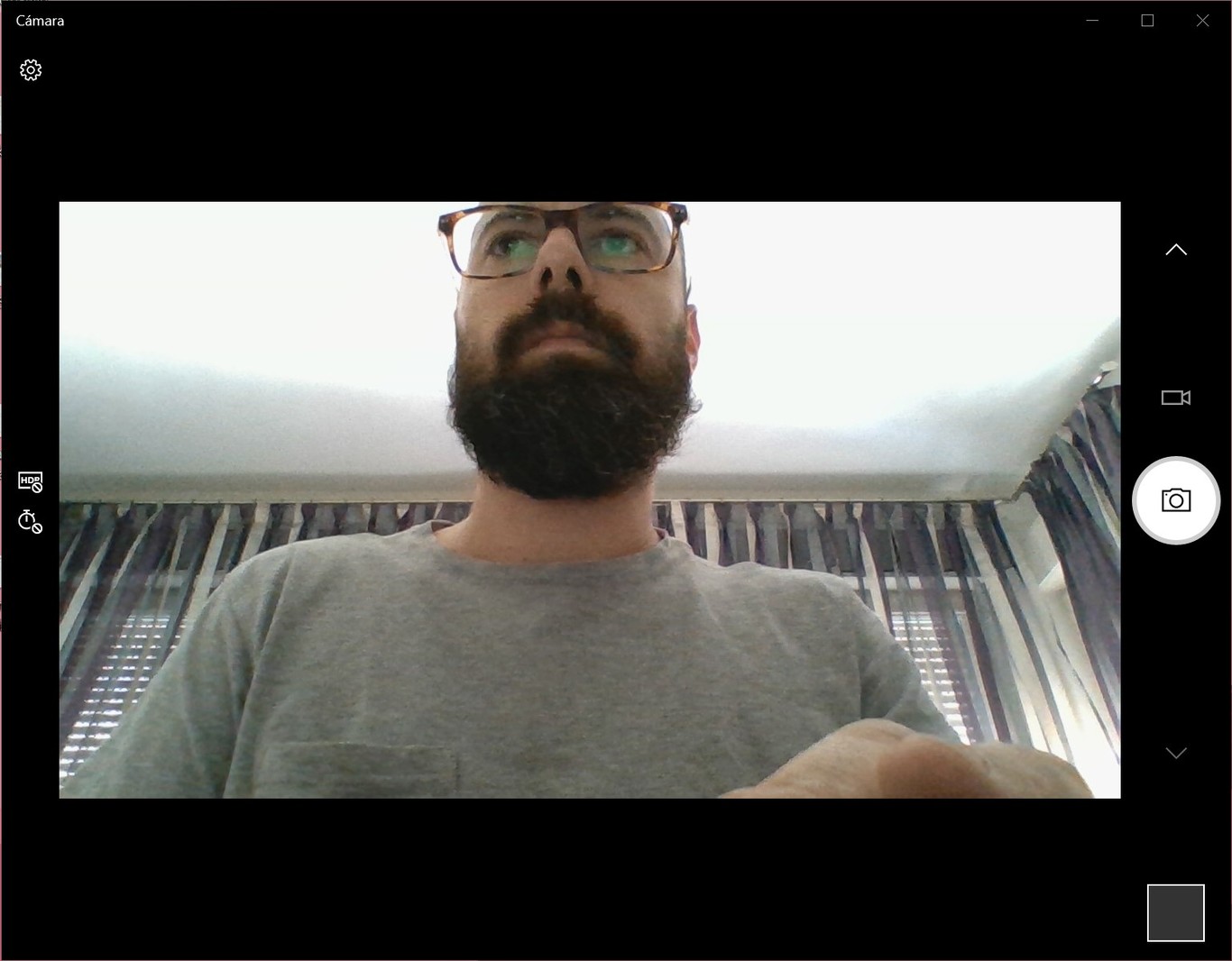 The retractable camera perspective on the keyboard is not best suited for video conferencing
Not being a computer for multimedia enjoyment specifically, the speaker system simply complies. They are two stereo speakers located at the bottom of the case and that offer a powerful and clear enough sound for the main use of the equipment. 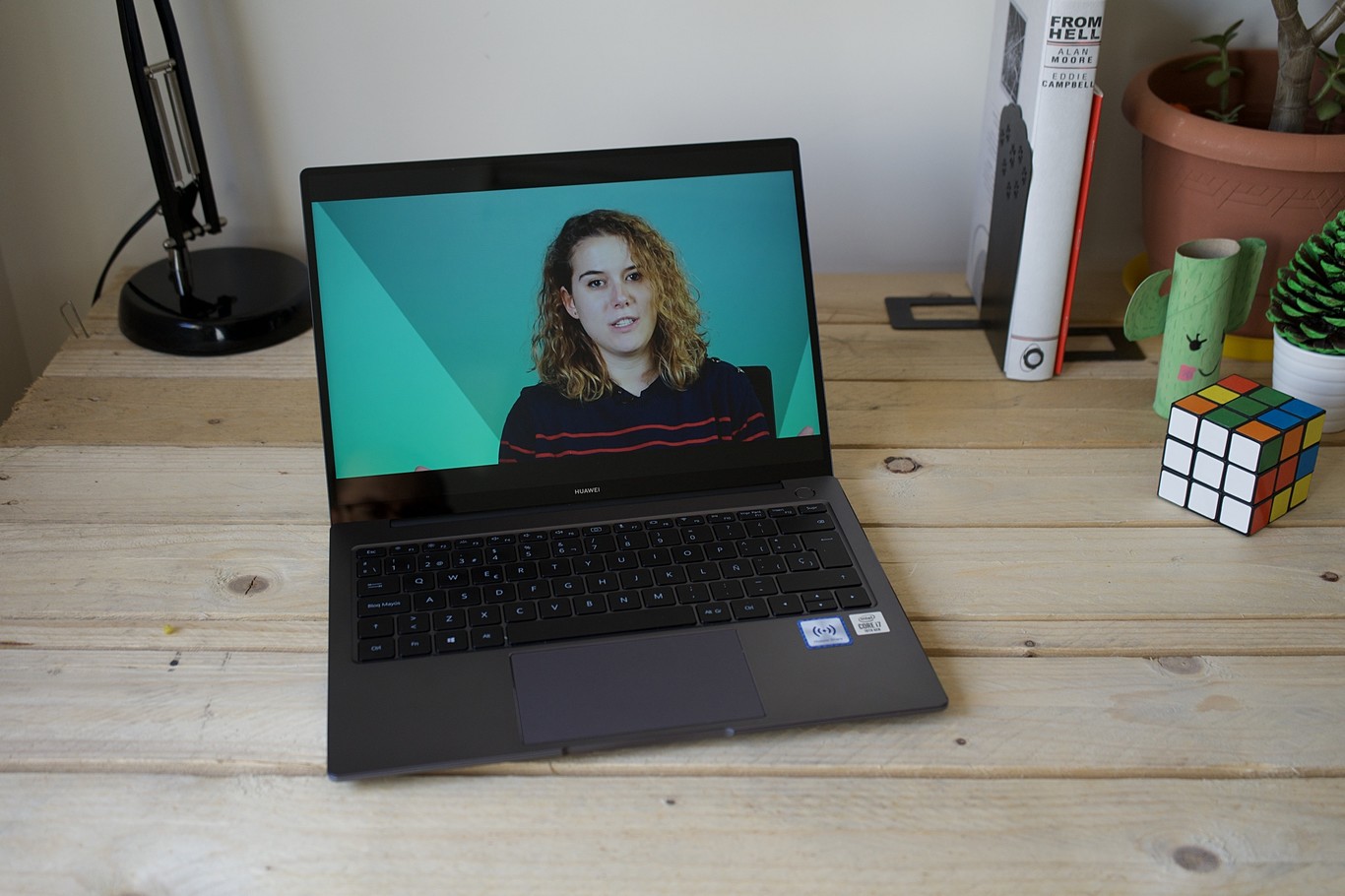 After the AMD chip version of its twin brother from the Matebook D range, this Matebook 14 simply opts to integrate the tenth-generation processors from Intel. The choice can be made between the Core i5 and Core i7, although the reference model for the Spanish market is just the version we have tested with the Core i7-10510U. 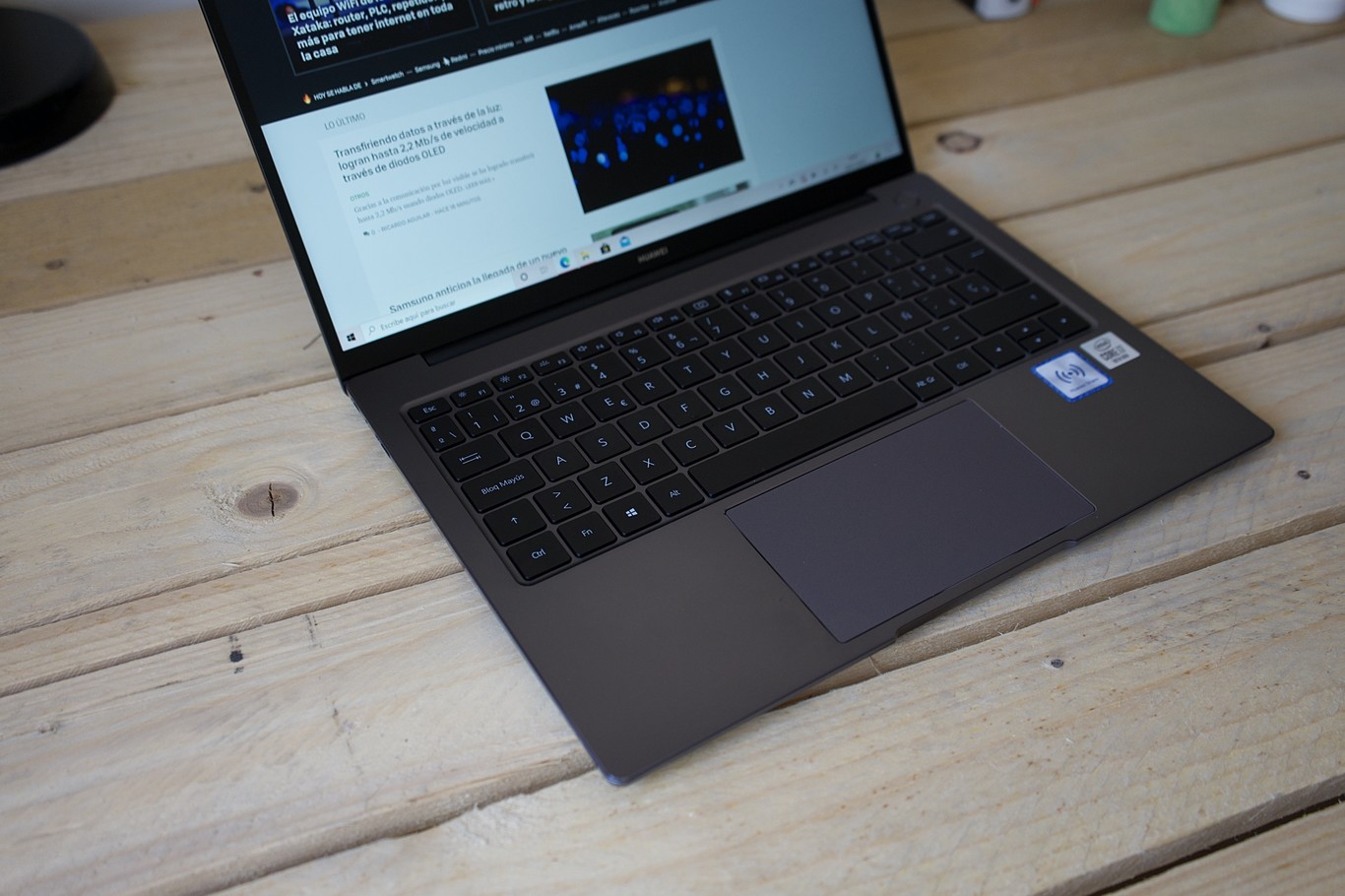 That same version is the one that offers good serial storage, 512 GB PCIe SSD, as well as 16 GB of RAM, in this case, LPDDR3 at 2133 Mhz. As usual in this type of equipment profile, the graphics is basic, with the NVIDIA GeForce MX350 in addition to the integrated Intel processors.

On this basis, the operation and performance of the Huawei Matebook 14 (2020) is completely fluid for basic navigation, office automation, image/video editing and programming tasks.

In our synthetic tests, we have obtained scores of 1390 points in the Cinebench test as well as 4140, 5090 and 5195 in the Home, Creative and Work tests of PCMark 8 respectively.

In the tests associated with the graphic section, based on the fact that it is not a team to play or work intensively in fields of design or video editing, in tests with 3DMark, this Huawei Matebook 14 (2020) obtained from Average almost 12,000 points in the Night Raid test and 12,200 in Sky Diver. If we put pressure to him with Time Spy, a test that does not correspond to him by configuration, the punctuation remains below 500 points. 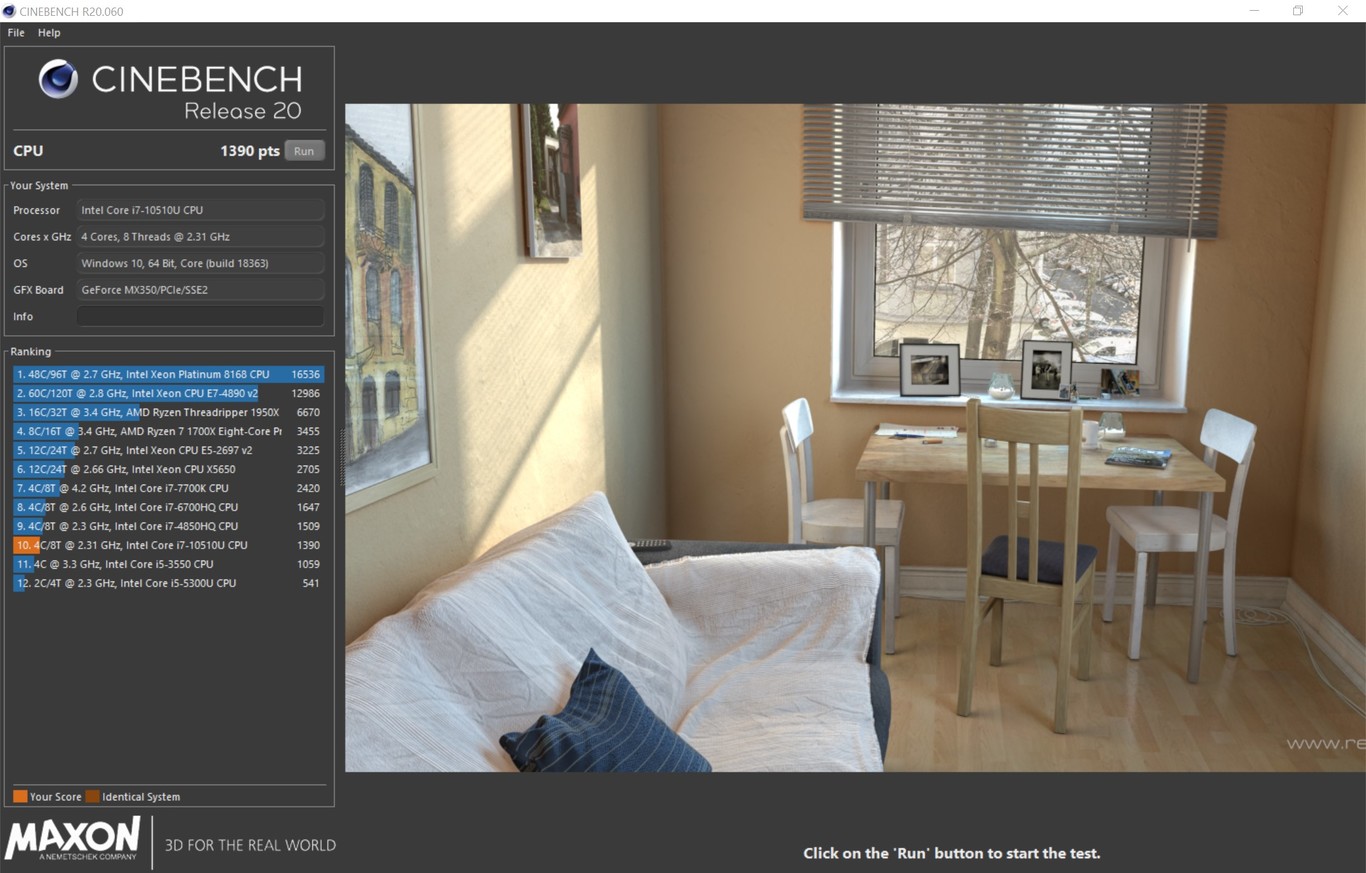 The game section with this team is limited to undemanding titles and without rushing in detail or resolution. But for Fornite games, for example, with medium settings and 1080p resolution, we can maintain rates around 60 fps without a problem.

The PCIe SSD has also left us with some very outstanding figures. At CrystaldiskMark we obtained on average almost 3,500 and 2,700 MB / s in reading and write speeds respectively.

A point in favour of the Huawei Matebook 14 (2020) as a work team is on the side of how quiet it is. You have to demand a lot of it so that the fans start working and in any case, it is always a contained sound and that lets us maintain a discreet usage profile even in quiet environments. 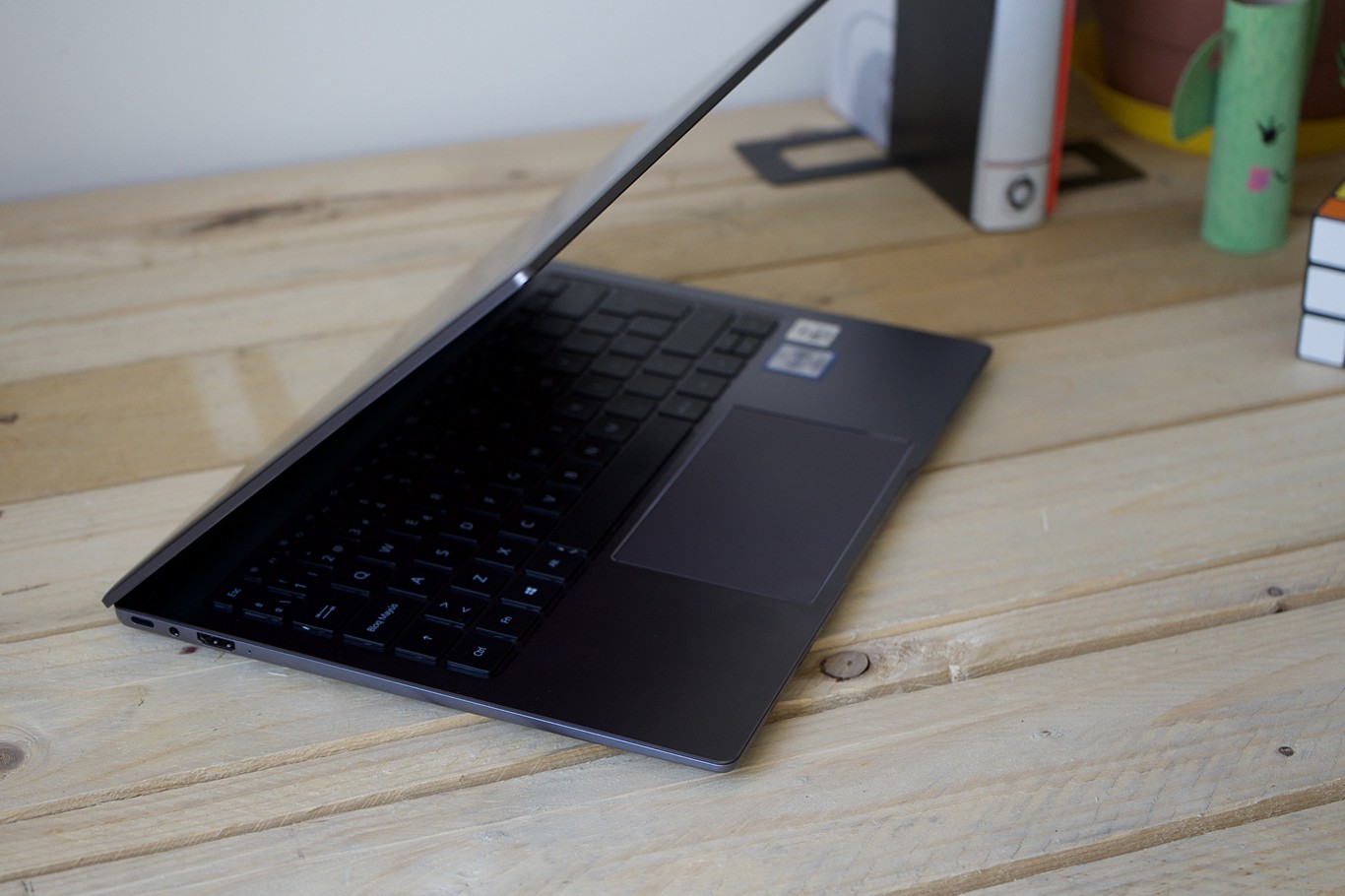 In work tasks related to web browsing, office editing and the like, the heat generated is well controlled, working for the team in a margin of between 45 and 60 degrees centigrade. When we demand more, the temperature rises close to 80 degrees, but it is concentrated in the lower part of the equipment and it will not bother us unless we want to use the equipment on our knees. There you have to have some caution in hot weather where the ambient temperature is already high.

The good press of the large Huawei smartphones at the battery level is transferred to this new Huawei Matebook 14 (2020). The internal configuration and 56 Wh battery It has left an excellent impression that we have been able to corroborate in our tests of real autonomy of the team.

With the screen around 50-75% brightness, always-on connectivity and navigation, social media, office automation and some photo/video editing tasks, the Huawei Matebook 14 (2020) has always ensured us autonomy above the 10 real hours. The used battery profile was not the most restrictive. By adjusting it, we can all