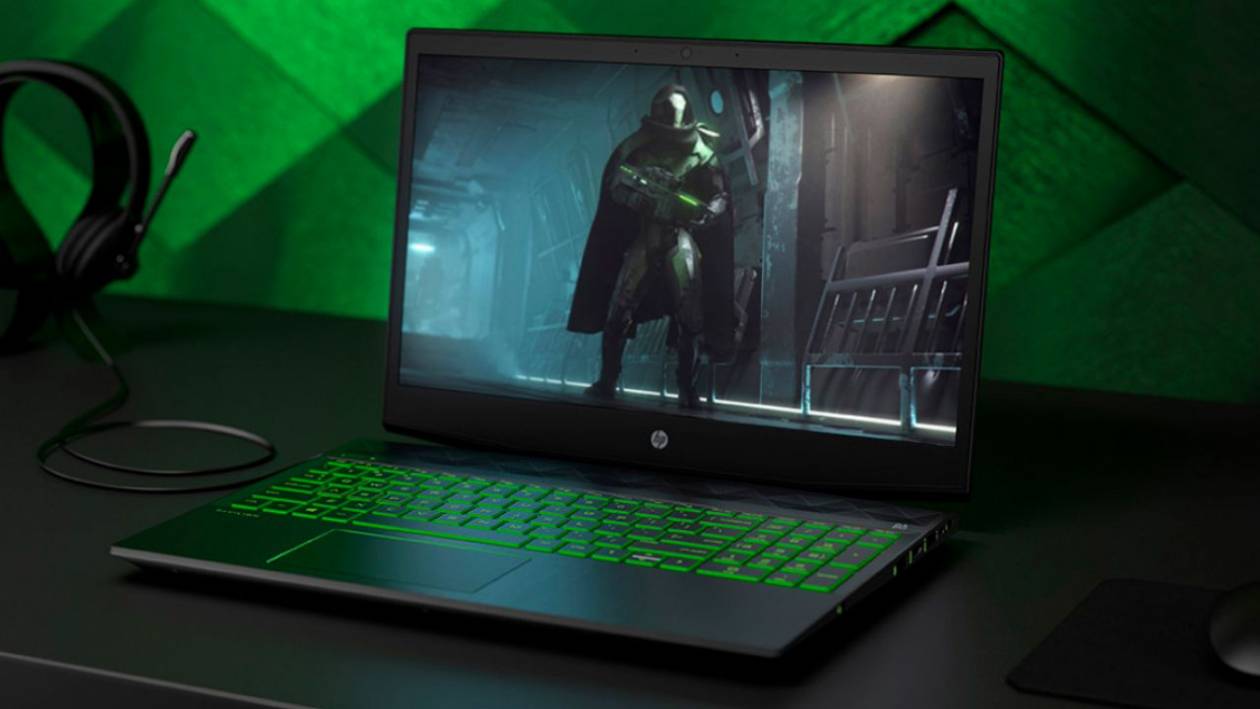 In recent years, the gaming laptop market has experienced a very strong acceleration, so much so that eminent representatives of the hardware industry, such as the CEO of NVIDIA Jensen Huang, have compared the spread of these powerful portable gaming machines to that of the most famous consoles, like PlayStation 4, Xbox One and Nintendo Switch.

This positive turnaround is due to several factors, among which the marked improvement in the quality/price ratio, with ever more performing components and reduced costs, as well as a decided softening of some designs that have allowed these portable parts to take on less aggressive forms (often excessive), especially for multitasking use.
This is precisely the direction taken by Hewlett-Packard with the 2020 range of the HP Pavilion Gaming Laptop series, which seeks to combine gaming performance with shapes also suitable for the working environment. The synthesis of this research is the HP Pavilion Gaming 15.

Even the eye wants its part (but without exaggerating …) 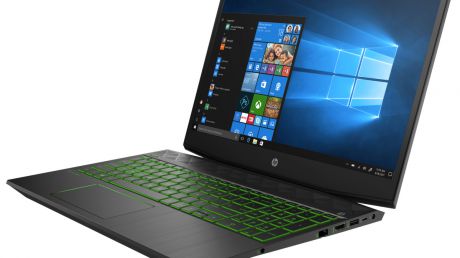 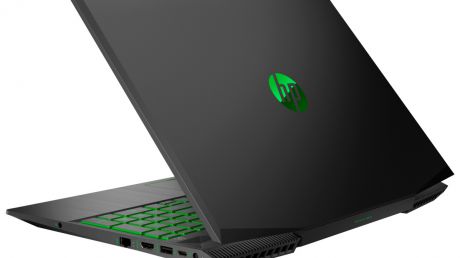 HP Pavilion Gaming 15 is a laptop with simple, minimal and clean lines accompanied by good care for finishes and details. In the version we tested (ec0014nl), the laptop has dimensions of 36 x 25.7 x 2.35 cm and a total weight of about 2.25 kg which allow it to be transported easily in bags and cases, also leaving some room for manoeuvre in the general organization. The choice of the slightly trapezoidal shape is interesting, with the air intakes placed in the rear and lower part, which gives the general system a certain dynamism and vaguely recalls the lines of certain sports cars without however being aggressive. The completely matt black colouring is rather elegant while the acid green chosen for the icons and details adds a “gaming” note to the whole.

Note also the HP logo placed on the upper body and adorned with a metallic chrome plating that against the background gives shades in the same shade of green. The internal part maintains a rather clean style, with the keyboard accompanied by acid green finishes that are highlighted, once accessed, by the backlight of the same colour.

Finally, the honeycomb grid with three-dimensional printing that protects the B&O audio speakers. In general, therefore, shapes and colours allow the Pavilion Gaming 15 to adapt to different situations, be they working or fun-oriented. 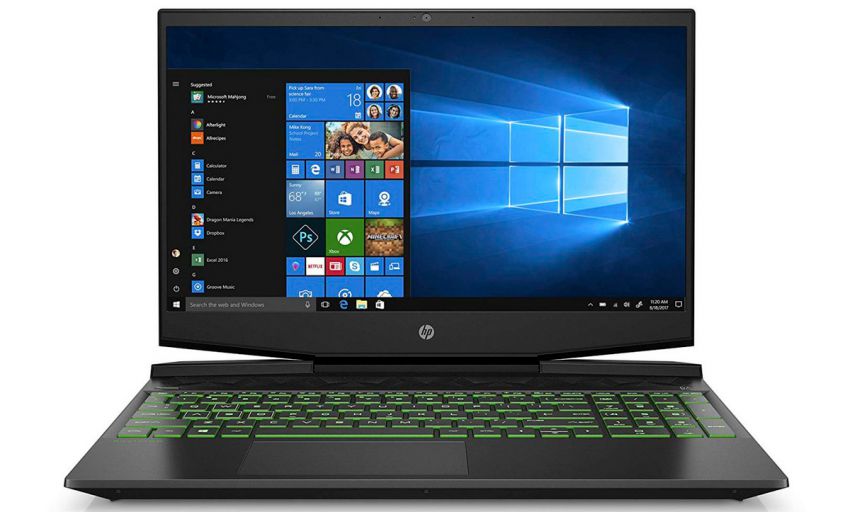 A hybrid with a gaming soul

The range of HP Pavilion Gaming laptops covers multiple market segments, starting from the entry-level to reaching the mid zone, with configurations that impact, depending on the performance, also on the design. The model in question is equipped with a processor AMD Ryzen 7 3750H (4 cores and 8 threads) with APU Radeon RX Vega 10 capable of providing a base frequency of 2.3 GHz which can boost up to 4 GHz. I 16 GB of DDR4 ram at 2400 Mhz allows you to easily manage even the most complex workloads while the512 GB NVMe M.2 SSD ensures optimal space and speed for all uses.

The dedicated video card NVIDIA GeForce GTX 1650 with 4 GB DDR5 instead reveals the gaming spirit of this laptop that aims to satisfy players with a good number of fps on the standard 1080p. The picture is completed by a 15.6-inch FHD display with a WLED backlight and anti-glare filter, the maximum resolution of 1920×1080 pixels and capable of expressing almost 220 nits of brightness with a gamut that is around 45% of the NTSC range. 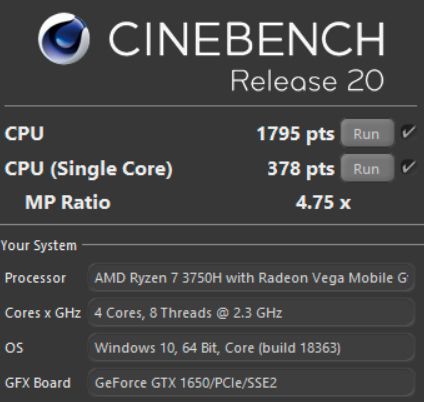 From the point of view of numbers, we are faced with a product that can provide noteworthy general performance, above average in the case of common and work activities and entry-level in the gaming field, although able to meet the needs of players up to 1080p.
The system benchmarks offer a fairly accurate indication of the capabilities of this laptop. The HP Pavilion Gaming 15 scores an overall score of 4060 with PCMark 10 while Geekbech 5 returns a score of 867 in single-core and 3566 in multi-core.
Moving on to the analysis of the CPU’s processing capacity, with Cinebench R20 it scores a score of 378 points in single-core to reach 1795 points in multi-core. Finally, the graphic tests carried out with 3D Mark: we obtained 3461 points with Time Spy (DX12) and 8081 points with Fire Strike (DX11). 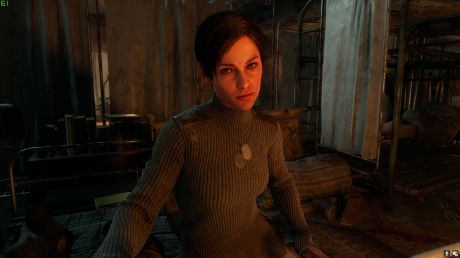 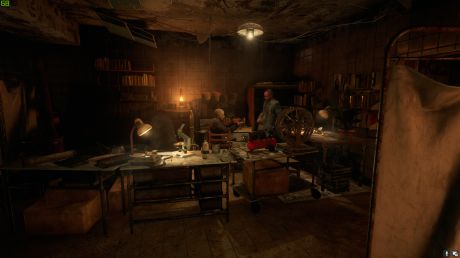 Finally, the field test carried out with Metro Exodus, a game capable of properly squeezing the PC hardware and capable of using the latest graphics technologies from NVIDIA. To get a good compromise between graphics and performance we had to set the settings at medium level with 1080p resolution: in this way the game remains stable on the average of 60 fps, touching the top of 70 fps in the least exciting moments. By spending a few minutes in customizing the settings, you can also achieve better results aimed at better graphic quality. In general, however, the gaming experience remains solid, even with battery power and with the support of one of the best-integrated audio that we have ever heard. In short, the HP Pavilion Gaming 15 is best expressed even with the most demanding video games, showing a remarkable power considering the market segment in which it is placed. 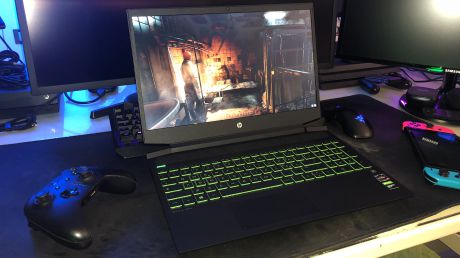 As for the connections, HP Pavilion Gaming 15 has a USB 3.1 Type-C port, a USB 3.1 Type-A port (for data transfer only), an HDMI 2.0 port, a multi-format SD memory card reader, an Ethernet port and a combo jack that functions as a headphone output and a microphone input. Connectivity is guaranteed by a stable and performing Realtek Wi-Fi 5 and Bluetooth 5 chip. The picture is then completed with the HP TrueVision HD integrated webcam with digital microphone. The laptop is powered by a 52.5 Watt/hour three polymer cell lithium-ion battery accompanied by a 150 Watt power supply. In standard or working conditions, the battery has managed to guarantee full operation for the whole working day, even allowing a few extra hours to watch video content.

Playing with the maximum settings allowed and faced with a reduced loss of performance, the Pavilion managed to resist for almost four hours before showing the first signs of slowing down. Finally, the software equipment is limited to the classic pre-installed Windows 10 accompanied by the HP suite for PC management. Finally, no problem for the presence of the two video drivers with AMD’s Adrenalin software that integrates very well with the operating system and with the NVIDIA drivers.