Thus, it is not surprising that many of the Internet giant’s users have considered one of the three ways that the company left those who trusted Google Photos: abandon the service in search of an alternative with better free or paid plans, contract a storage extension with Google, or adjust to the one available by default for free. The problem with this last option is that miracles, to Lourdes, which is often said.

The truth is that Google Photos storage expansion plans are quite affordable, so if you already used the service and were comfortable with it, scratching your pocket can pay off. Be that as it may, if you are a Google Photos user and want to use up storage space as much as possiblePay attention to the following tips.

The first thing you have to know is that the unlimited free storage space of Google Photos was only such when the option of «high quality»Was activated. Ergo, if instead of saving your files in “original quality” you chose “high quality”, a compression was applied to images and videos that reduces the weight of the file, without reducing the quality excessively.

Interestingly, Google came to warn earlier this year that the high-quality mode irreparably damages photos, although judging by how long they have taken to reach such a conclusion since there have been a thousand independent checks on it, everything smelled of a attempt to discourage the masses from taking advantage of the free storage time that was left … 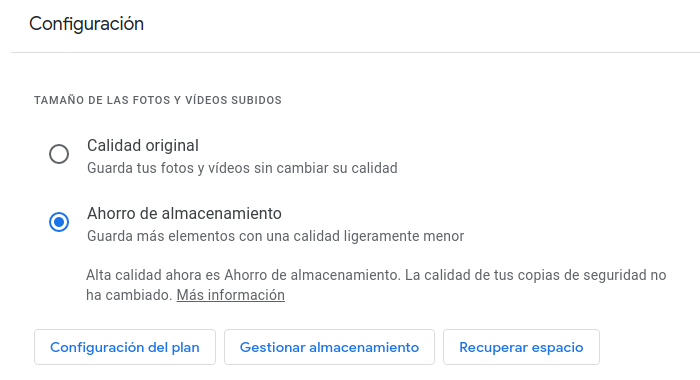 And the proof is that they continue to offer the same mode, with a nuance: «High quality is now storage saving«, Is indicated in the Google Photos settings. Ergo, you can continue to use this mode to save some storage space, without losing too much quality in photos and videos (it all depends on the original resolution: photos are reduced to 16 MP and videos to 1080p).

In that same section of the Google Photos configuration you can apply a generalized compression to all the files, executing the option «Reclaim space«: 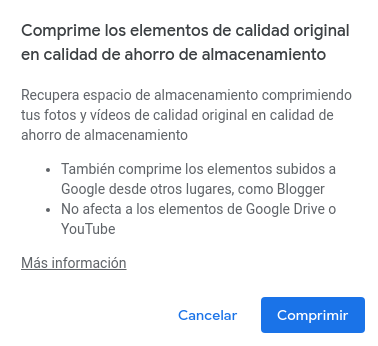 You can also access «Manage storage«, Where a graph is shown with the shared storage that you have spent and, a little further down,«Review and delete«, A section with various options with which to get rid of ballast, including:

Of course, everything you do is up to you: you decide what is important and deserves more space, which is filling and you do not care to lose or compress … Just in case, it is convenient to review everything calmly, because no matter how much you exceed 15 GB of free default space, if you accumulated it before June 1, it will not be erased. But do not start to delete impulsively either, because you are not going to recover space beyond the free or what you pay.