TECHSMART
Home Latest news How many peppers are in this chili … this smart device tells... 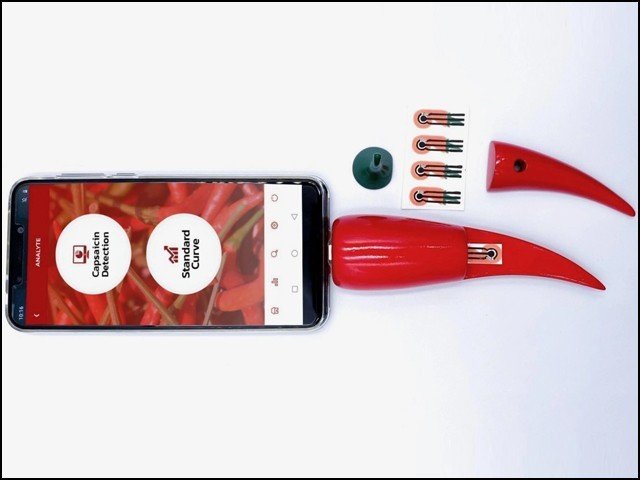 Thailand: Some peppers are really very sharp while some peppers just look sharp otherwise they don’t taste as spicy. To find out now, Thai scientists have invented a device that could be connected to a smartphone to detect the speed of the peppers.

The device, dubbed the “Chilika Pod”, was invented by Warakorn Lambat, an assistant professor at the Prince of Songkala University in Thailand, and his colleagues.

The device looks like a strip of glucometer, which is beautifully encased in a red pepper-shaped mold.

The intensity of the pepper is determined by drying it and adding it to a solution of ethanol and shaking it well. Only a drop of the liquid formed in this way is taken and placed on the bandage.

Capsaicin, the compound that causes “pepper” in peppers, chemically reacts with the graphene and nitrogen in the strip to release electrons, which the device senses in the form of an electric current. The higher the current, the higher the amount of capsaicin, that is, the faster the peppers.

This measure of chili is transferred to the smartphone connected to the device where a special app analyzes it and displays the results on the screen.

Other expensive and popular analytical instruments have also confirmed the accuracy of the instrument’s measurements, after which preparations have been completed to offer it for regular sale.

The first model can measure the speed of six types of peppers, which can be easily used in retail stores, hotels and even restaurants, while pharmaceutical companies besides the general consumers also use the same device to measure capsaicin in some medicines. Will be able to use.

Details of this unique invention are published in the research journal “Applied Nanomaterials”. Latest issues I have published online.

‘Todo’ is a simple, elegant and completely free task manager for your Android