TechSmartAerezona Developers
HomeMobileAndroidGoogle Play is filling up with 'Dynamic Island' apps for Android and...

Google Play is filling up with ‘Dynamic Island’ apps for Android and there is everything: beware

There is no doubt that of the few novelties that the new iPhone 14 brought, Dynamic Island is one of the most talked about, and rightly so, because it provides a solution, if not perfect, much more attractive than it was, to a recent problem in mobile phones: the notch of the camera or notchcall it what you want.

Yes, it’s true: the iPhone 14 brought much more with it than Dynamic Island, as we gather in our review of the iPhone 14 Pro Max, but among the highlights are incremental improvements that are very interesting, but not surprising. For example, the subject of cameras: the Pro camera system may be the best that has been seen so far, but it was a feature that was going to arrive sooner or later on mobile phones.

Now, the topic of Dynamic Island has been something more unexpected, that It has been liked a lot outside and inside the ecosystem of Apple terminals, and the best example is that the next generation of iPhone will fully commit to it. And what about Android, you wonder? That’s where we’re going, and it is that if the iPhone were the pioneers with the theme of notchit didn’t take long for the Androids to keep up with them.

So the big question is… Will Android as a platform bet on its own implementation of Dynamic Island? I’m not exaggerating if I say that, if asked, there would be many of us who would want it for yesterday, but while it happens or it doesn’t happen, and if it does it won’t happen tomorrow…: third-party applications to the rescue! Or, at worst, taking advantage of the time to, excuse the redundancy, take advantage of whatever unwary falls into their networks.

Just in case you’re confused, this is Dynamic Island:

I have noticed a rebound, although it was something to be expected. It turns out that The Verge publishes a story about DynamicSpot, an application designed to offer the same functionality as Dynamic Island on Android. As they warn, the application points ways, but it is in an early development phase and different errors may arise. In addition, it is a paid application in its full version and even in this it does not reach what is on iOS and iPhone.

However, it is enough to do a quick search on Google Play to see that the term Dynamic Island, alone or accompanied by taglines like iPhone, notch, xiaomi either themeamong others, is becoming visibly popular. In fact, as you begin to write the name, an application called Dynamic Island Info already stands out with an average rating star and several comments accusing it of being a scam, an app that does nothing more than display advertising. 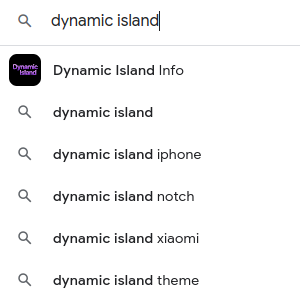 Seeing other applications that respond to the same term, there is a bit of everything, also those that seem reliable or, at least, with hints of offering functionality related to Dynamic Island, but practically all of them have very few downloads and hardly any comments. How to trust, knowing the history of Google Play. Over time, obviously, the wheat will be separated from the chaff and, if not officially, we will have a Dynamic Island for Android as Apple commands, or very similar.

In the meantime, it is better not to fall into temptation, because not even in the best of cases, such as DynamicSpot’s (there you have it in case you feel like it; it’s in early access), isn’t it going to be worth the loss of time in its current state. Better to wait for others to do the sifting and for the invention to mature in the way it has to.