TechSmartAerezona Developers
HomeTech NewsGoogle is the company that collects the most information from its users,...

Google is the company that collects the most information from its users, Apple the least.

An interesting study carried out by StockApps has identified which are the companies that collect the most data from their users, and the truth is that most of the results it has given fall within what was expected, except for one detail, and that is that Facebook has positioned at a lower level than we imaginedsomething that the truth is quite curious considering the history that this company drags.

The graph is very clear. Google is the company that collects the most data since has obtained a score of 39 in this study, followed by Twitter with 24 points, Amazon with 23 points, Facebook with 14 points and Apple with 12 points. The study highlights that the big N collects from the precise location of the user to the browsing history and their activity in third-party applications and websites.

Surprised? Well you shouldn’t, but wait this isn’t over yet. This report also says that Google collects the emails in users’ Gmail accounts, as well as other types of personal user information, shaping a cocktail so varied that it goes so far as to say that the Mountain View company tends to collect pretty much any kind of user data. 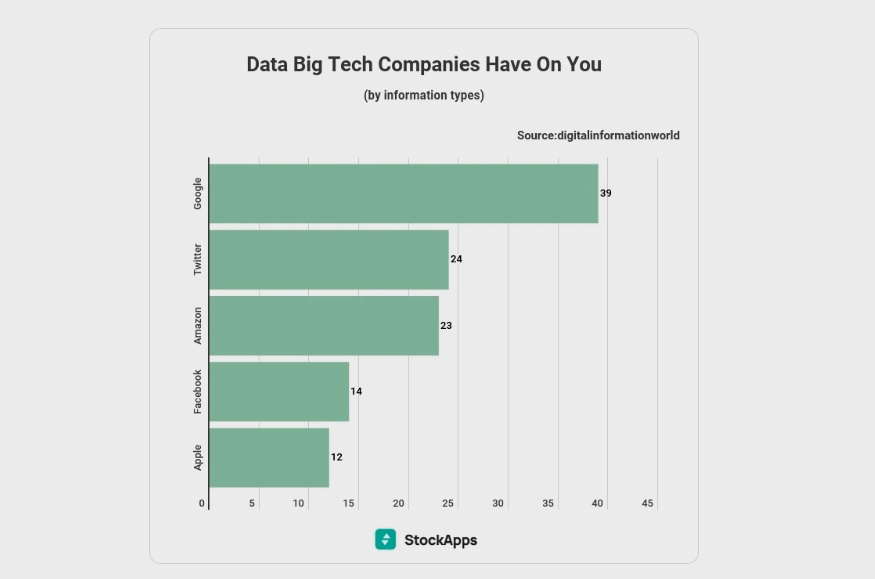 Google offers a lot of free services, so Much of this data is used to maintain and improve them, but it is clear that they are also used in targeted advertising. Nothing new under the sun, although having the data in hand, and backed by a report, is something that many users need to realize that when something is free, it is because you are the product, one way or another.

Regarding Twitter, Amazon and Facebook, the report highlights that all three collect a large amount of user information, but that it is mostly obtained of the data entered by the users themselves. As for Apple, the apple company is the most respectful of user privacy, since it only collects the information necessary to maintain the accounts of its users, with all that this entails.

Apple tells the truth when it boasts of not collecting data from its users beyond what is strictly necessary, while Google plays on a completely different level. What can we say, in the end we live in an era where data has become paramount for the big technology companies, and not only because of everything related to targeted advertising, which has been seriously affected by blockers, but also because of the value they bring to the development and improvement of services and applications.

Notability, the popular application note-taking for iPhone, iPad and macOS, has been updated with...
Gaming

REDMAGIC 8 Pro, first steps with the mobile gamer of the year

The phone that every gamer was waiting for has arrived, and I have had...