Tired of your traditional keyboard and everything you’re used to when browsing? Well, if you want to innovate, you can try a new unusual proposal from Google in Japan: a stick-shaped keyboard, which lines up all the main keys of a conventional peripheral on a huge stick measuring 1.65 meters.

The best thing about the new device, the company suggests, is its multifunctionality. As you can see in the presentation video, even without understanding Japanese, some suggested functions are, in addition to the keyboard itself —which could be used by two people at the same table—, it could become a stick for making tracks or even a support for networks to catch insects. Another unusual suggestion is to follow the growth of a child and mark their height with the keyboard.

As you may have noticed, this is more of a joke than an actual product the company is promoting. But, to give that serious background that makes things funnier, it is possible to find the project for those who want to play with the possibilities with the help of a 3D printer.

The joke is also based on a pun, as the project wants to go “beyond the keys”, an expression that recalls a word used for “slash”. Designers suggest that because it’s only slightly wider than a single key, the keyboard is ideal for cluttered desks, it’s also easier to clean and less likely to be stepped on by cats — apparently. 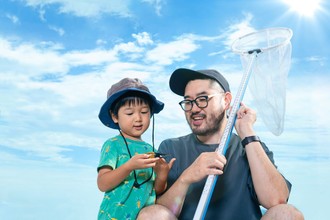 Anyway, it is still possible to see suggestions of using the keyboard as a weight to balance on a tightrope or even as an aid to press switches or look for something under the sofa.

The joke is endless, and you, can you see any positive points to use this keyboard? Leave your comment!