The Galaxy M23 is an affordable Korean option to offer a set with 5G without having to pay a lot. On the other hand, the Moto G62 seeks to compete in the same segment, with some characteristics different from the rival.

Between Samsung’s smartphone and Motorola’s, which offers the best value for money with the fastest network? The TechSmart Comparative gives you the answer now.

We started with the design with two cell phones that resemble other models from their respective brands. In the case of the Galaxy, the camera block is sprung vertically, while the Moto brings the oval module.

Both are constructed of smooth plastic on the sides and back. Only they deliver a metallic painting, to look like a more expensive model. Additionally, the G62 is the more compact and lightweight of the duo.

None of them have any certification to guarantee resistance to water and dust. The two bet on the presence of the fingerprint reader integrated into the power button, but they followed different paths in the notch. Samsung preferred a teardrop format, against the more modern punch-hole used by Motorola.

They support microSD storage expansion, but the M23 is the only one of the pair to have a dedicated memory card slot. We also have in these devices Wi-Fi in the AC standard, for 5 Gigahertz networks; Fifth-generation Bluetooth, with a 5.1 version on the Moto superior to the rival’s 5.0; and NFC, for approximation payments.

The G62’s more modern, compact and lightweight design gives it the first point.

Both the Galaxy and the Moto offer an LCD screen with Full HD+ resolution, so as not to disappoint in the definition of the images. The Korean one is a little bigger in inches, but it lags behind in front use, due to the larger edges it has. The display material of the two does not stand out in terms of brightness or color calibration.

Manufacturers have not inserted any Gorilla Glass protection against scratches in these devices. At the very least, there’s a 120Hz refresh rate on them, to increase the fluidity of system animations.

With no big difference between them, we are tied in this regard. 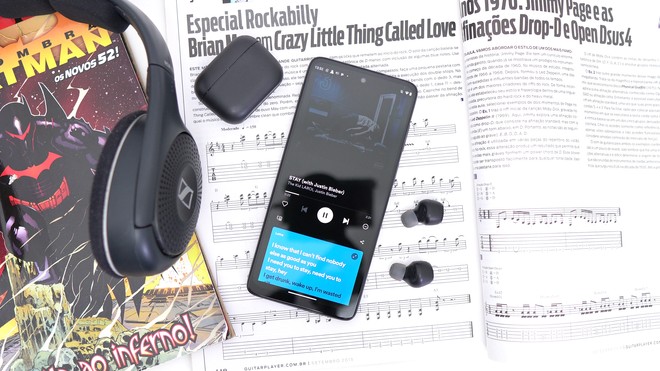 In the audio part, Samsung placed only a mono speaker in the lower portion of the cell phone, while Motorola took care to place a stereo audio system, to improve the user’s immersion.

The result is a greater sonic power of the G62 in relation to the Galaxy. The Moto’s balance between bass, mids and highs is still far from perfect, it’s just above what the M23 offers.

Another important point is the presence of a free headset with the G line model, different from what happens with the Korean. At least, you will have a physical connector for the accessory in the pair.

The Moto G62 scores the point for stereo sound. 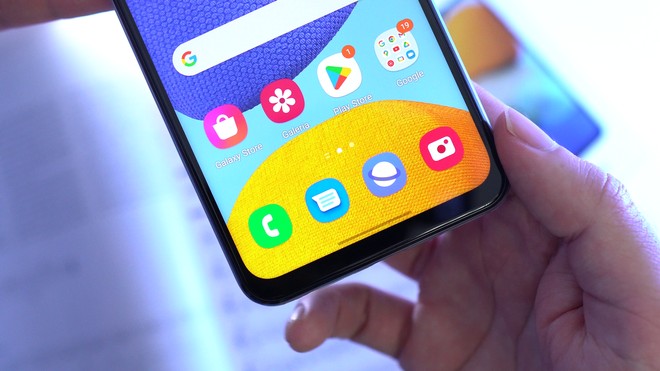 These devices come out of the box equipped with Android 12 as the native operating system. They may not always have the latest security packages, but they are guaranteed to update to Android 13.

Both provide good fluidity and smooth animations, thanks to the panel’s 120 Hz refresh rate. Cell phones also have 5G support, for fast mobile network for a long time.

In terms of features, the Galaxy stands out for its Edge Screen shortcuts and customization options, such as opening the camera by pressing the power button twice. Moto also allows you to easily run the app to take pictures, in addition to turning on the flashlight, using the brand’s classic gestures, which are the highlight of the smartphone.

Different interfaces, but balanced benefits. Therefore, we give one point for each.

Manufacturers bet on Qualcomm platforms on these devices. Samsung used the Snapdragon 750G, against the Snapdragon 480 Plus used by Motorola. But what made the difference in multitasking performance was the fact that the Moto had less RAM, which resulted in several apps reopening and gave a victory of almost a minute of advantage for the Galaxy.

In benchmarks, the Korean is still ahead in AnTuTu and Geekbench, but not by such a great distance. The chips of these cell phones have the same Adreno 619 GPU, which is capable of running all types of games well, even without maximum quality in the heaviest ones.

For the fastest and most efficient multitasking, the M23 takes the point here.

Both the Galaxy and the Moto come equipped with a 5,000mAh battery. Same capacity, equal autonomies? It’s not like that. Our standardized tests indicated an advantage of just over 40 minutes for Korean, which surpassed the 28 hours of total duration.

When charging, the M23 needed less than two hours to reach 100% with its 15 W adapter. Even the G62’s 20 W TurboPower couldn’t do better and took 12 minutes longer than its rival.

Thus, we have a point for Samsung.

These devices come equipped with a triple set of cameras with the same resolutions. Despite a 50 MP main sensor present in them, the results are not equal. The Galaxy takes better pictures during the day, with colors and contrast right, as well as superior sharpness. At night, Motorola’s Night Vision does a more efficient job.

Their ultrawide registers images with lower sharpness and follow the characteristics of the main one to define which is the best in each period of the day. The macro of both suffers from the low resolution and the lack of autofocus.

The M23 scores for the best catches during the day; and the G62 scores for superior night shots.

The Korean’s camcorder is the only one of the pair compatible with 4K videos at 30 fps. In turn, the Moto is limited to Full HD, but still records above 30 fps. The Galaxy still has the fastest focus among them. At least, both have electronic stabilization and good quality sound capture.

For the set of qualities, Samsung gets one more point.

Despite having a lower resolution front camera, the M23 proved to be a better option in this regard. It registers better selfies during the day and hits the blur, while the G62 lacks the blown background in portrait mode. Both suffer from grainy photos at night and demand a good light source. Front-facing footage of them is limited to Full HD.

It’s one more point for the Galaxy.

The Galaxy M23 and Moto G62 can be found officially in the Europeian market. They were launched for the same suggested price of R$ 2,000 and have already dropped in value on the market, except that the Samsung model has appeared closer to R$ 1,000 than Motorola’s.

Therefore, Korean closes the Comparative with the last point.

In this dispute, the Galaxy M23 ended up being the winner with a reasonable margin on the scoreboard. It stood out for its larger screen, faster performance and battery with greater autonomy and shorter recharge time. The cameras perform better in daytime shots, while the rival does better at night. But it still ranks above when it comes to video or even selfies.

On the other hand, in addition to a more efficient night mode in capturing images, the Moto G62 delivers the most modern, compact and lightweight design, not to mention the display with fewer edges and the stereo sound system.

Although they were launched at the same price, the Korean cell phone being found with a better value for money only reinforces it even more so that it is the most suitable option between these two.

Between these two, do you prefer the Galaxy’s fuller package, or the Moto’s one-off benefits? Don’t forget to tell us in the space below.