TechSmartAerezona Developers
HomeTech GiantsAppleFirst tests show an advantage in the autonomy of the iPhone 14...

The iPhone 14 Pro Max seems to have an advantage in terms of autonomy over its predecessor, the iPhone 13 Pro Max. That’s what the first battery tests of Apple’s most powerful model show. At first, the unplugged period increased by around two hours compared to the previous generation model.

Even though it is the heaviest iPhone released by the manufacturer to date, the device has less battery than its predecessor. The 13 Pro Max had a capacity of 4,352mAh while the new high-end device arrived with 4,323mAh. That is, the mark of more than 14 hours unplugged is thanks to the performance of the new A16 Bionic chip, which arrived with superior graphics performance than the previous generation.

The test was carried out by the Tom’s Guide website and this autonomy time that the smartphone conquered placed it in second place among the tested devices. The autonomy champion so far is the Rog Phone 6 Pro from Asus, which spent more than 15 hours away from the socket on just one charge.

In relation to the iPhone 14 Pro Max, the autonomy can be very good, however, the most powerful charger that the manufacturer offers has a power of only 20W. Therefore, this ends up being a negative point, especially if you take into account that there are devices with chargers of more than 100W available. In addition, it is always good to remember that the accessory does not come in the device box. 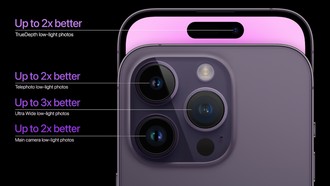 Another point worth mentioning is that the benefits of the new processor of Apple’s product are restricted to the iPhone 14 Pro and Pro Max models only. After all, the iPhones 14 and 14 Plus were launched with the A15 Bionic chip, which is the same present in the cell phone line launched in 2021.

The Apple iPhone 14 Pro Max is not yet available in Europeian stores. To be notified when it arrives click here.

One UI 5.1 should be released in February with the arrival of the Samsung Galaxy S23 series

THE samsung is already preparing for the launch of its next series of high-end...
Apple